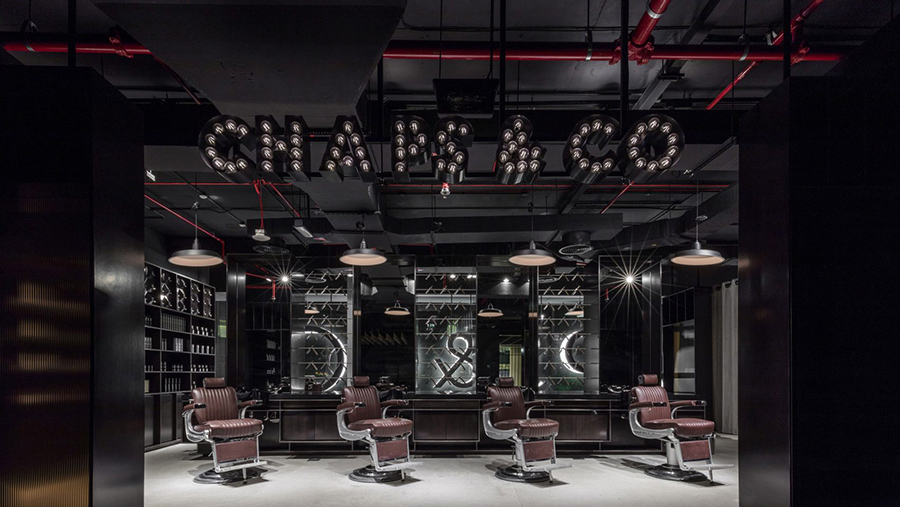 Men’s grooming is a growth segment and barbershops have kept popping up daily for several years.  And while stylish men’s full-service spas are not yet as common as the fairly sterile unisex spas and decidedly feminine women’s spas, there are signs of significant growth in bigger cities, and the competition is heating up.

We have covered very few men’s grooming establishments of any kind as it has seemed that the design of the new shops invariably takes the same ‘harkening back to the days of gentlemen’s clubs’ approach. 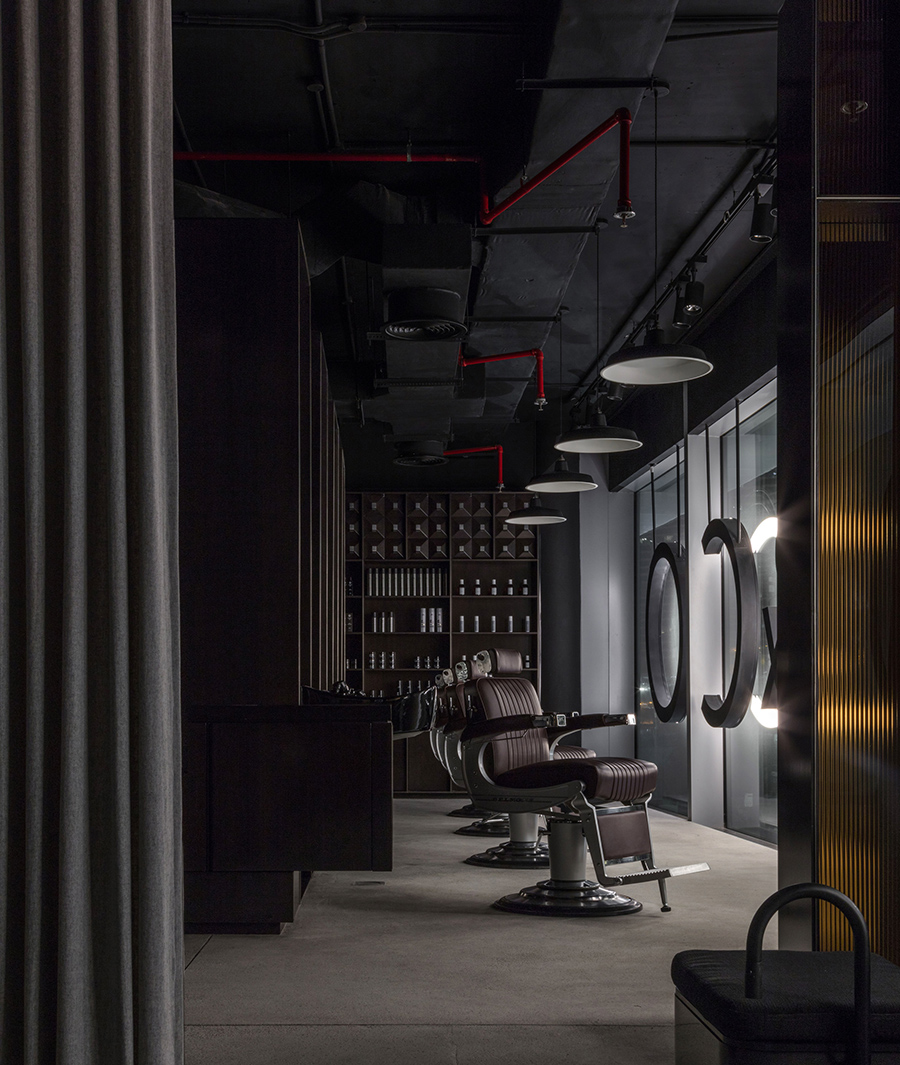 However, some time ago, Barberia Royal  in Mexico City caught our attention as its designers had to overcome some exceptional obstacles, including having to recycle previous design components. But the results are fresh and funky – while still having that old-world charm, too.

We have also watched Chaps & Co. take hold in Dubai.

Its third location, Chaps & Co. D3 in the Dubai Design District, has gained in its first year the same kind of enthusiastic following as its previous two stores. 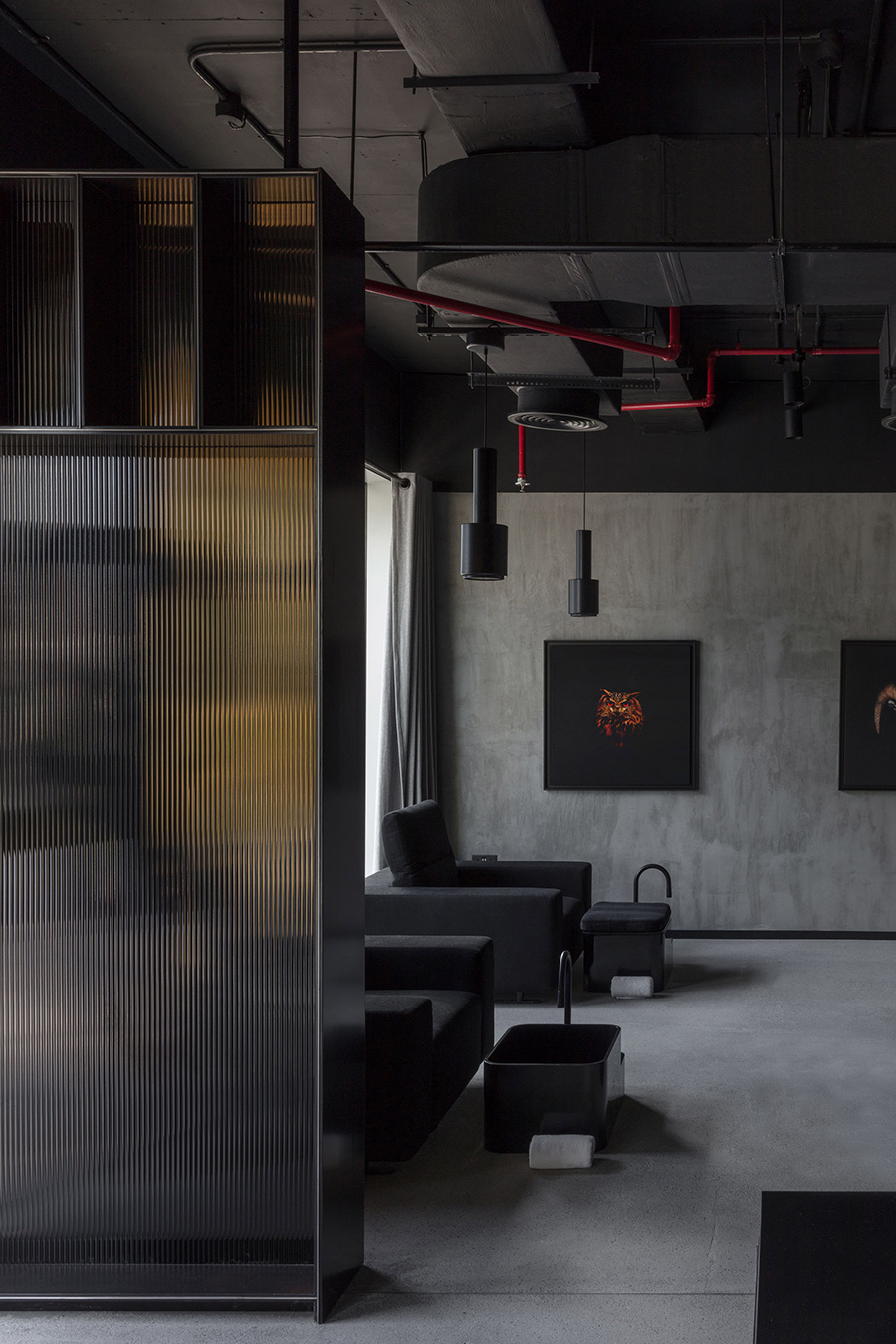 The concept, conceived by the three British owner partners together with their “in-house” designers, Soho, London-based Nicholas Szczepaniak Architects is solid.

Yes, the design of the three stores is undeniably great, but we love the comprehensive customer experience approach of the business even more.

No-one is loyal to walls (or furniture, or branding…) in any business, but this is even more pronounced in the case of a service as intimate and personal as grooming. The quality and consistency of the actual result, and the approach and care of the staff are absolutely critical in the long-term success of such a business. No amount of advertising, promotions or re-design is going to fix problems in the area of service. 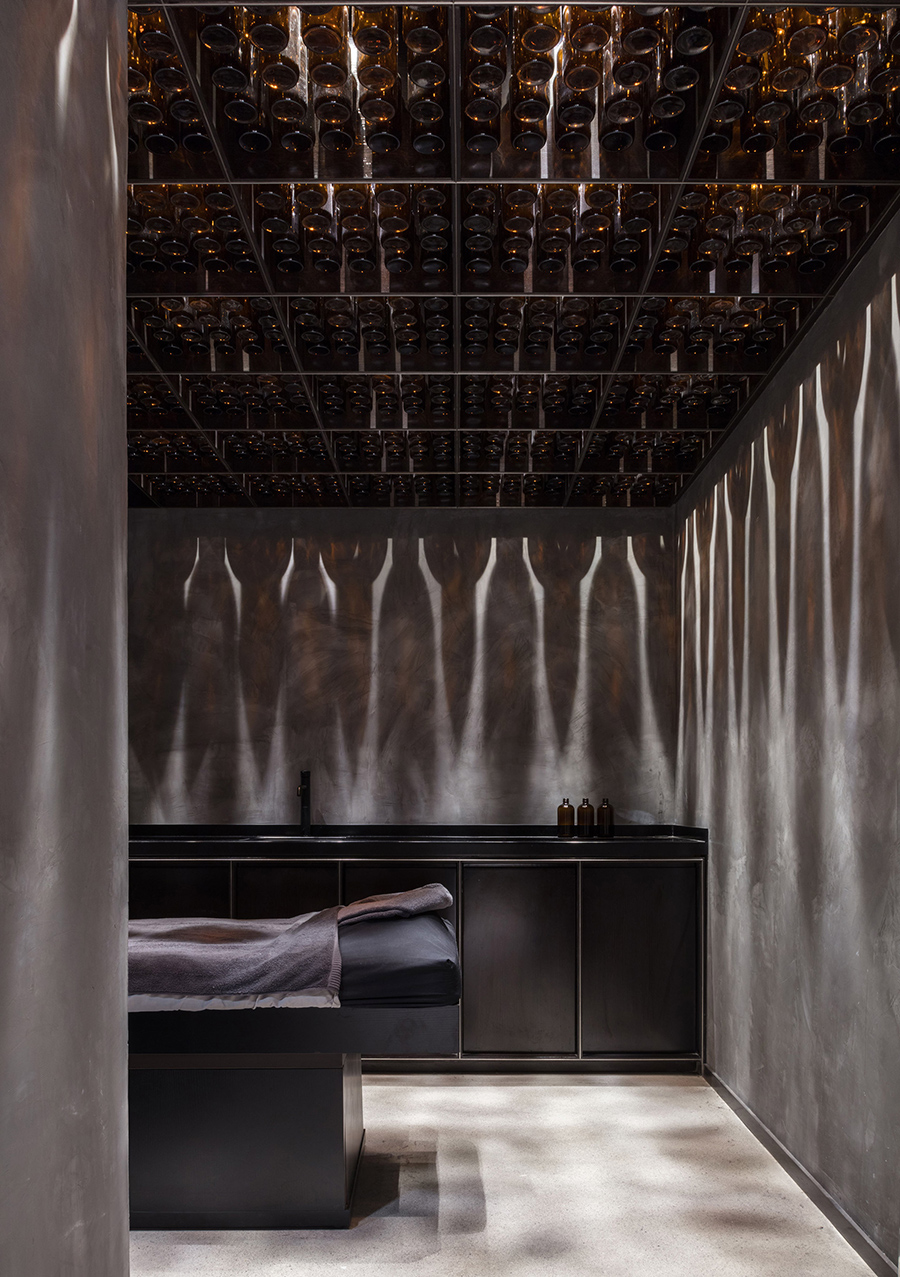 In a salon publication, Niall Keegan of Chaps & Co. was quoted as saying: “Our mission is to transform the ‘regular chore’ of visiting a barbershop into a pleasurable comforting experience. We pride ourselves on the service standard of our talented barbers in a masculine but cozy environment,”

The first Chaps & Co.  store opened in the Jumeirah Lakes Towers, Goldgcrest Executive Tower in 2015 and the second in Dubai Marina Trident Grand Residences in 2016.

The third,  Chaps & Co. D3. opened in the Dubai Design District in 2017 and it took the concept forward in a big leap. The 300 square-metres (3,230 sq.ft) in size it is three times larger than the previous two.

And with the total company staff number now past 40, the goal of delivering unwaveringly consistent superior service is even tougher to achieve. But the partners are not intimidated and are rumoured to be planning their fourth location. 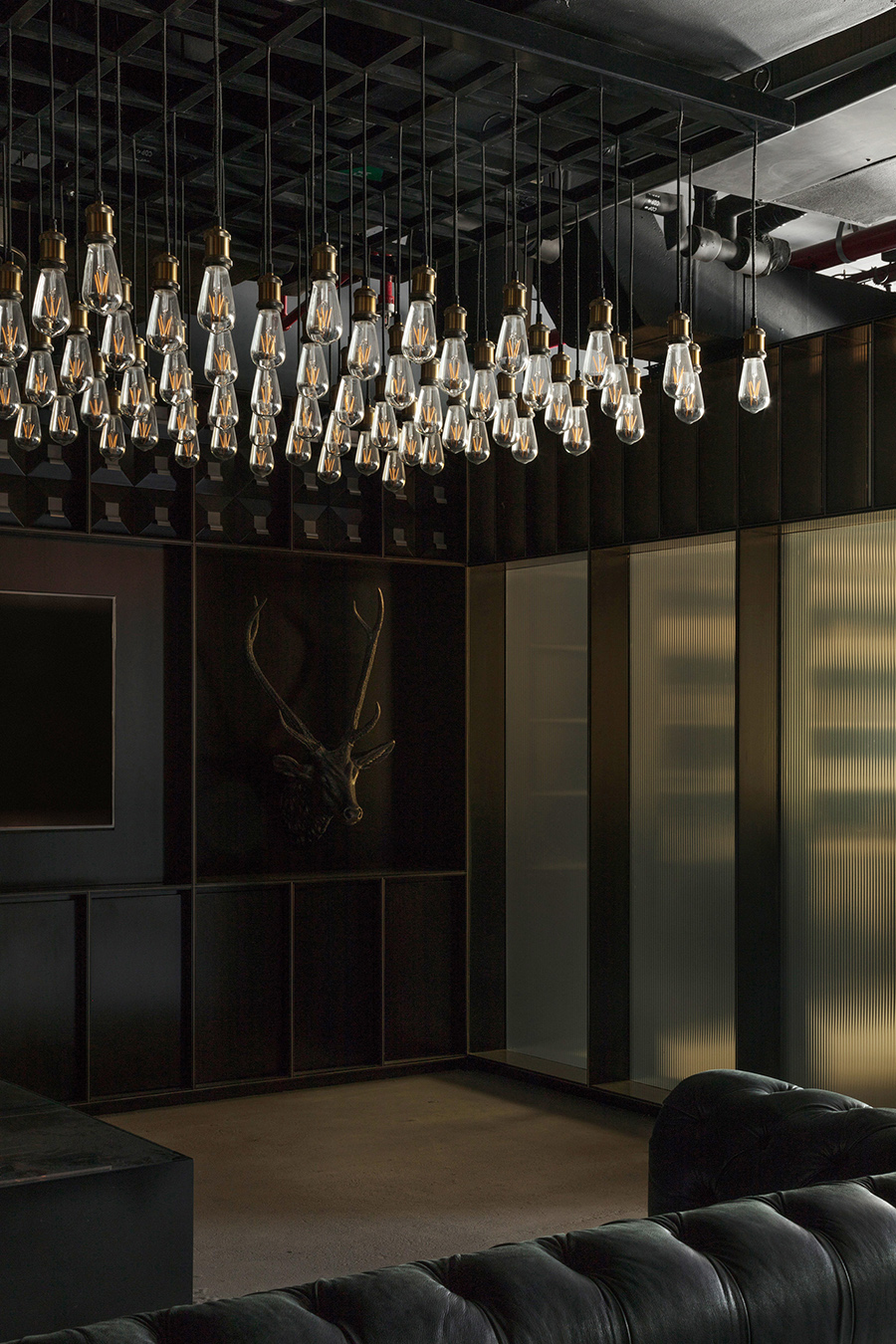 All three stores have been designed by Szczepaniak. In the Design District store, his elegant use of dark oak, steel and raw concrete creates an intriguing mix of old and new, minimalist and rich.

Yes, there are the standard dark leather and smoky wood, but the metal and concrete wipe out any hint of old-world prissiness. This is more jailhouse than boardroom.

Interestingly, Keegan has said that James Dean’s character “. . . portrayed everything we stand for in terms of being a stylish gentleman.” 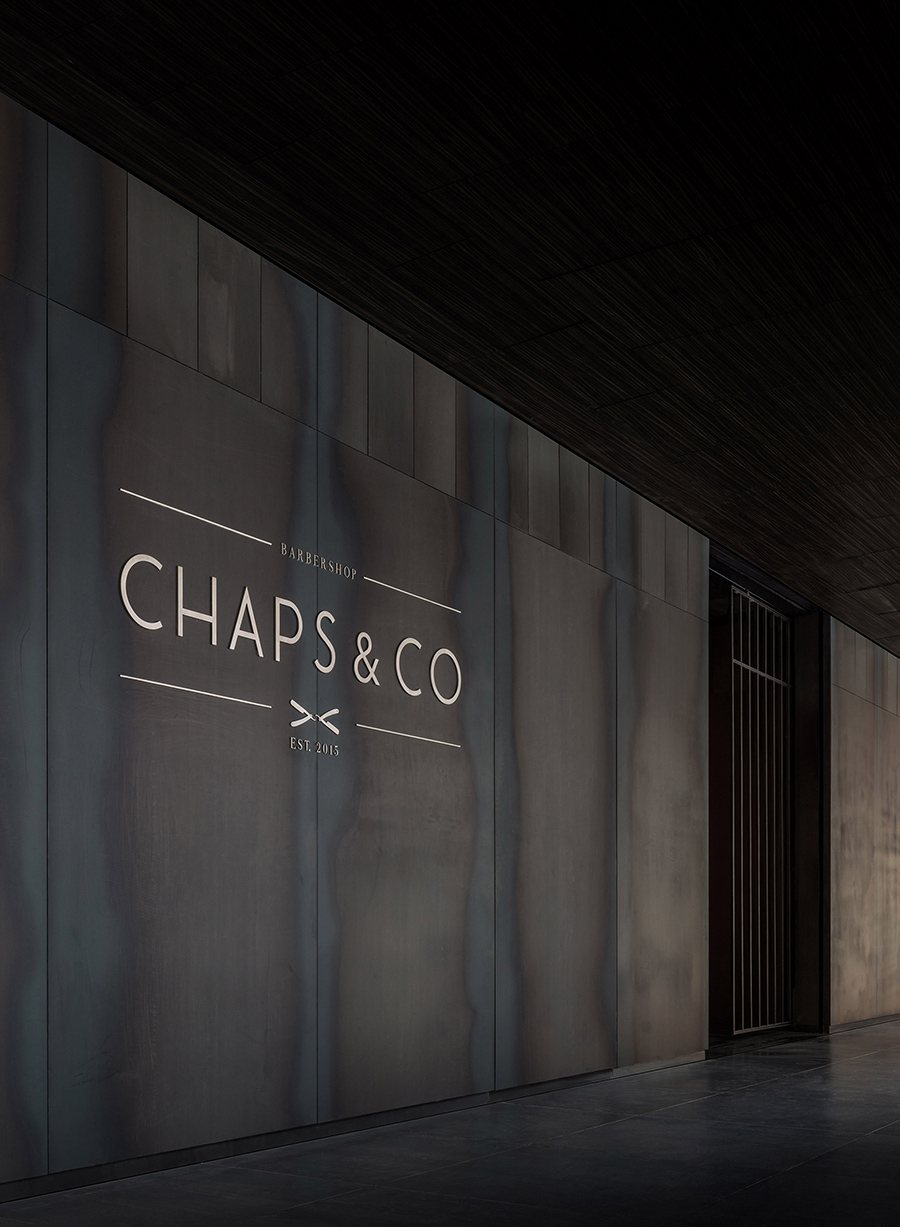 We think James Dean would not look out of place at Chaps & Co. Tuija Seipell. 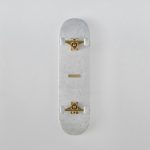