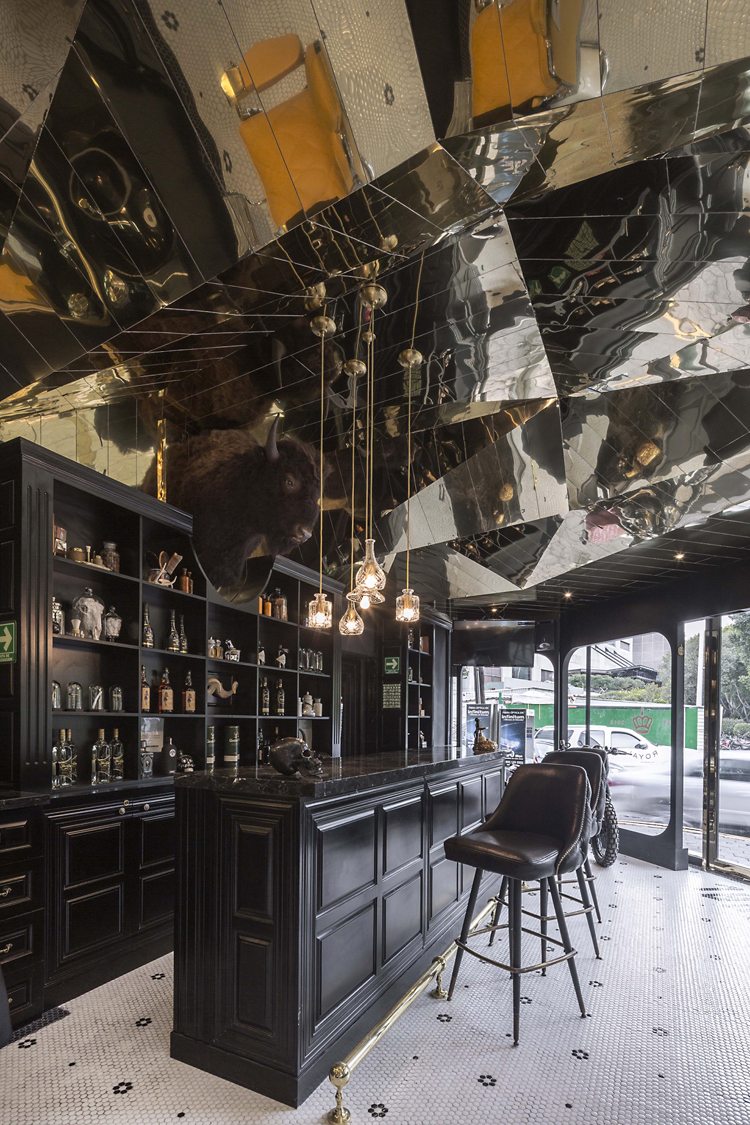 We admit. We are suffering from a mad case of barbershop envy. And that takes some doing, pampered as we females supposedly are with spas and salons and boutiques. 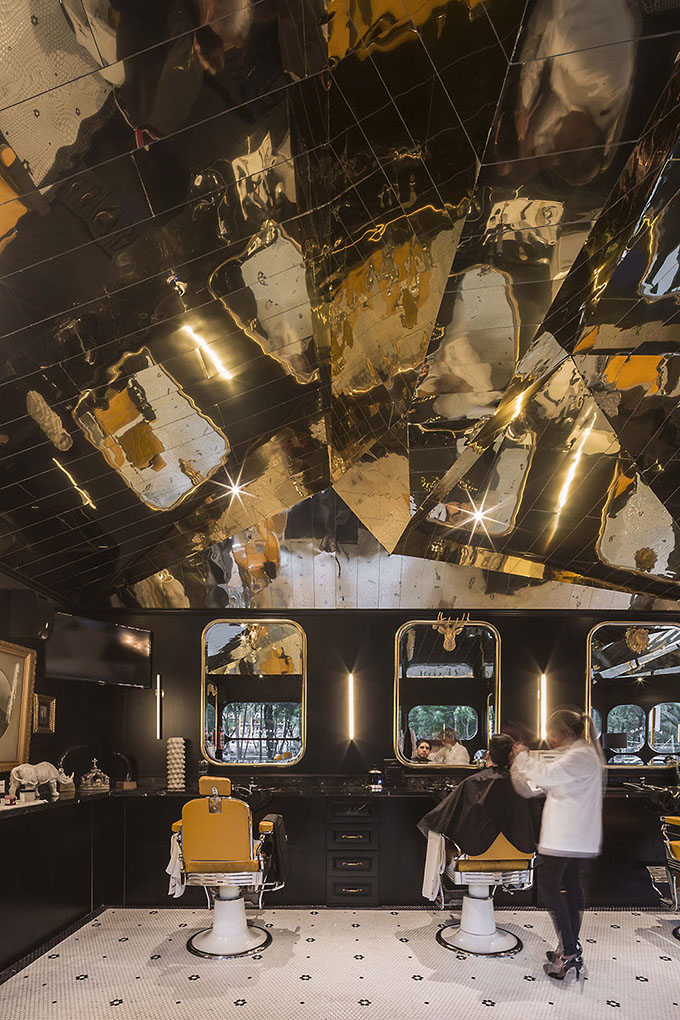 But a true gentleman cave like this gorgeous barbershop, Barberia Royal in Mexico City, threatens to flatten our powdered noses as we peer into the brand-spanking new salon that manages to exude that annoyingly suave and hard-to-replicate old-world charm while seeming thoroughly modern. 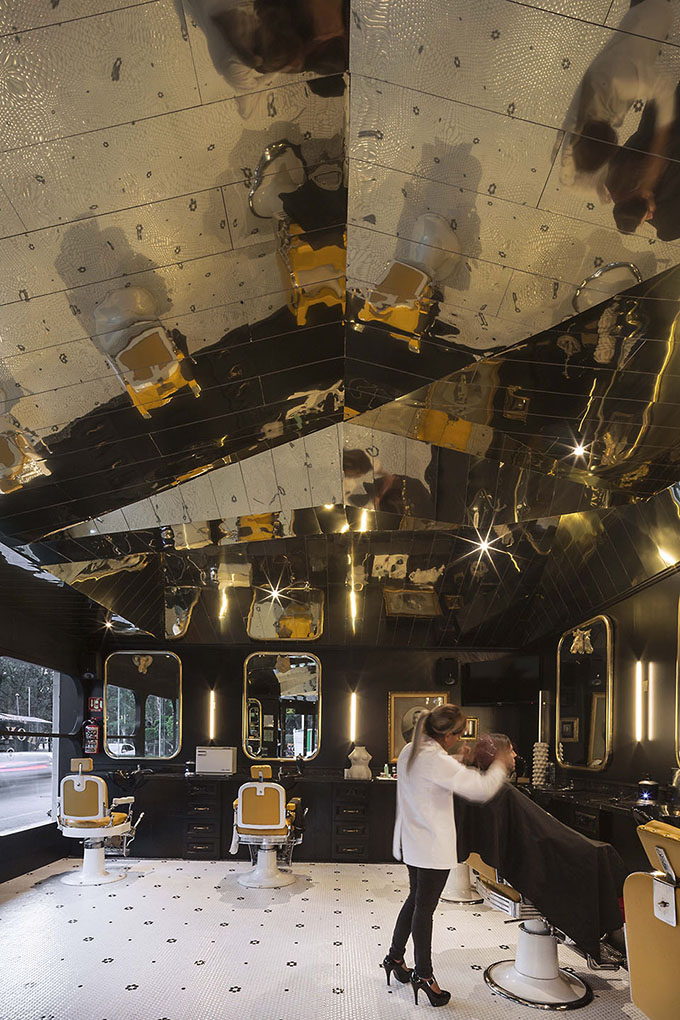 Barberia Royal is located on the street level of a relatively unattractive building in a historically important neighbourhood. The corner is famous for the Reforma – the ceremonial boulevard created in the 19th century by Maximilian Habsburg as Emperor of Mexico –  the city’s best hotels and the Chapultepec – one of the world’s largest urban parks. 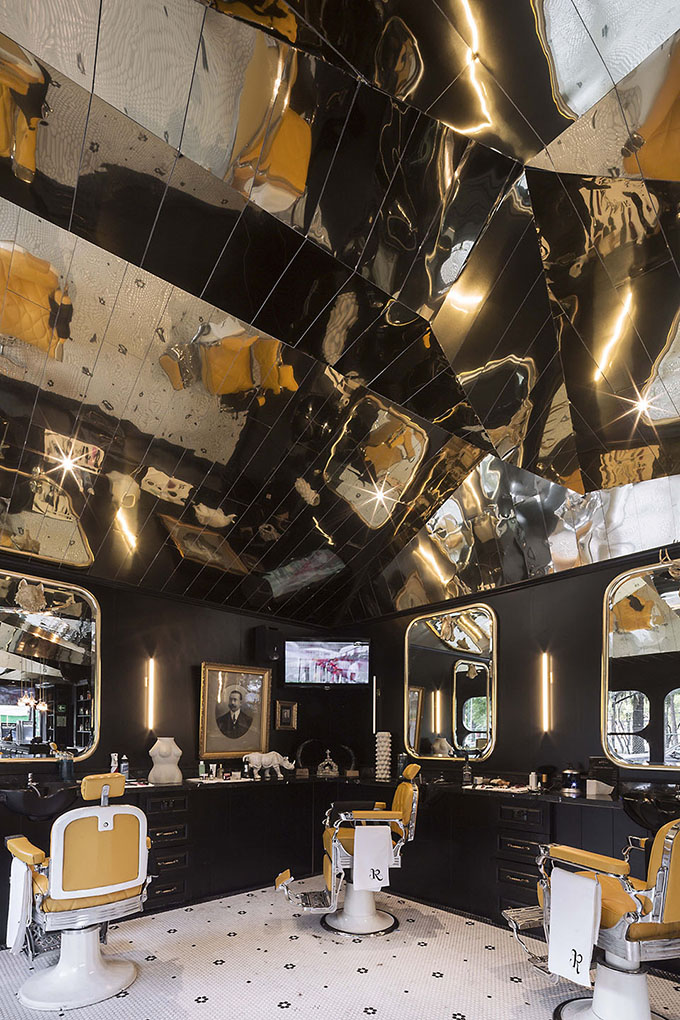 Mexico City-based ROW Studio with team members Álvaro Hernández Félix, Nadia Hernández Félix and Alfonso Maldonado Ochoa tackled the project with confident gusto, although it had some unusual and potentially unattractive components. Chief among them was the fact that the space had already been partially developed as a barbershop but that particular project was never completed. 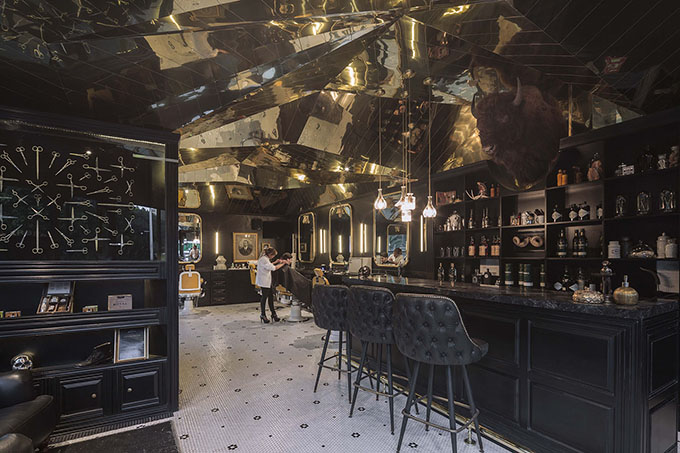 Incorporating parts of the previous design, and recycling mouldings, wooden elements and other components has perhaps been the secret that made the new Barberia Royal appear so refreshingly and eclectically new, although the chief tone is decidedly traditional and old-world. 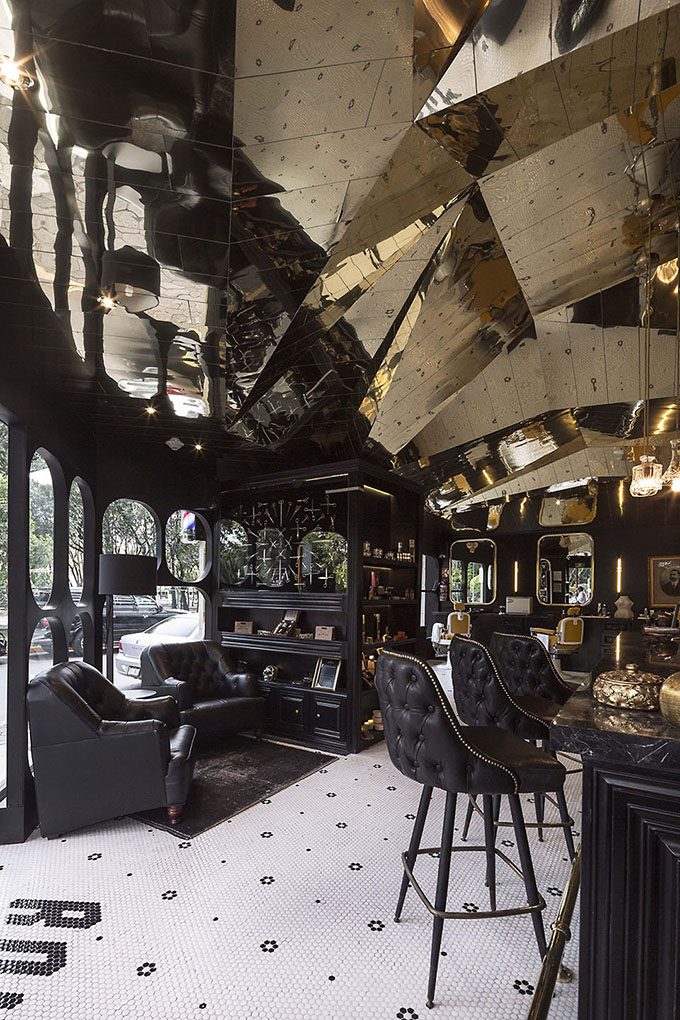 We love the tiled black-and-white hexagonal tiles of the beautiful floor; we love the dark-panted wood, the brass and the marble. But we especially like the rounded edges that are echoed in many pieces and elements: the windows, the mirrors, the chair backs; even some of the lighting fixtures speak this soft-edged language of timeless grace and elegance. 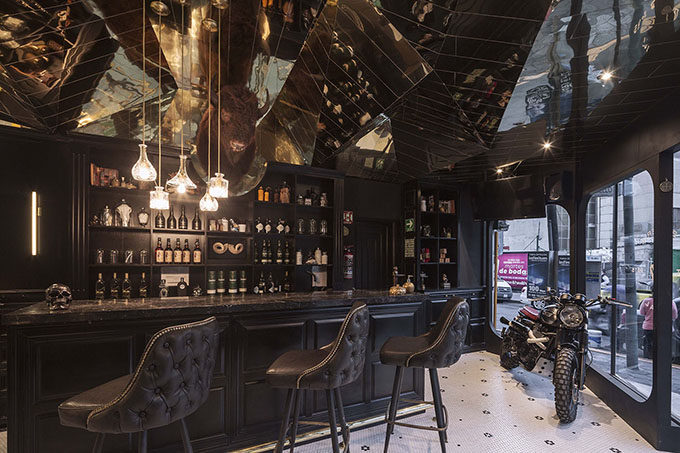 The insanely confusing ceiling is an attractively out-of-place eye-catcher with its reflective cut-outs of golden anodized aluminum. 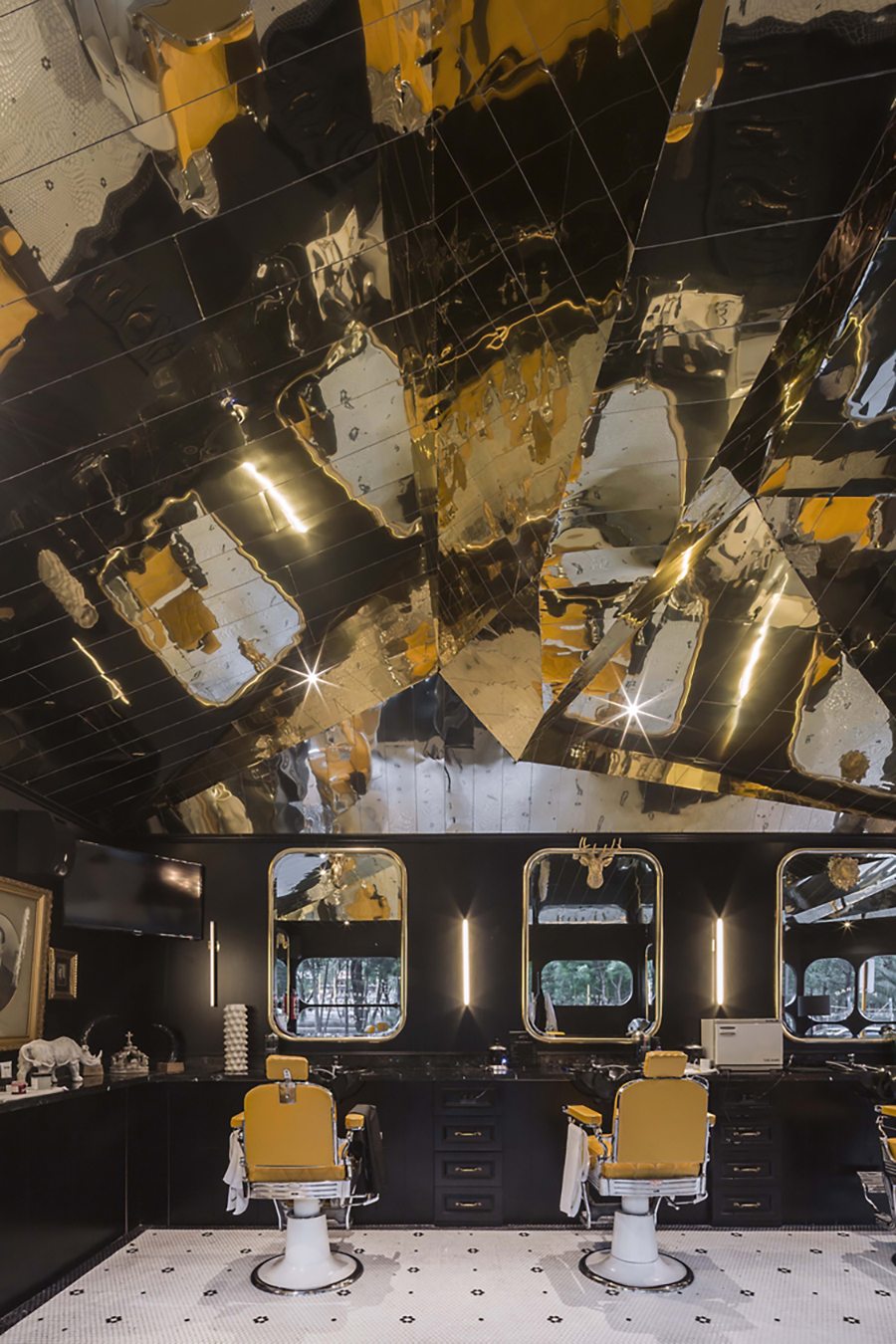 The space is divided elegantly into two areas: The barbershop proper – with all its traditional accoutrements including original chairs from the 1950s upholstered in mustard-yellow leather, each facing a large beveled mirror with golden heads of a lion, a wolf, a stag, a zebra, an elephant and a moose as decorative accents,- and the waiting area with its leather seating and fully stocked courtesy bar and display cases showing the best grooming products. 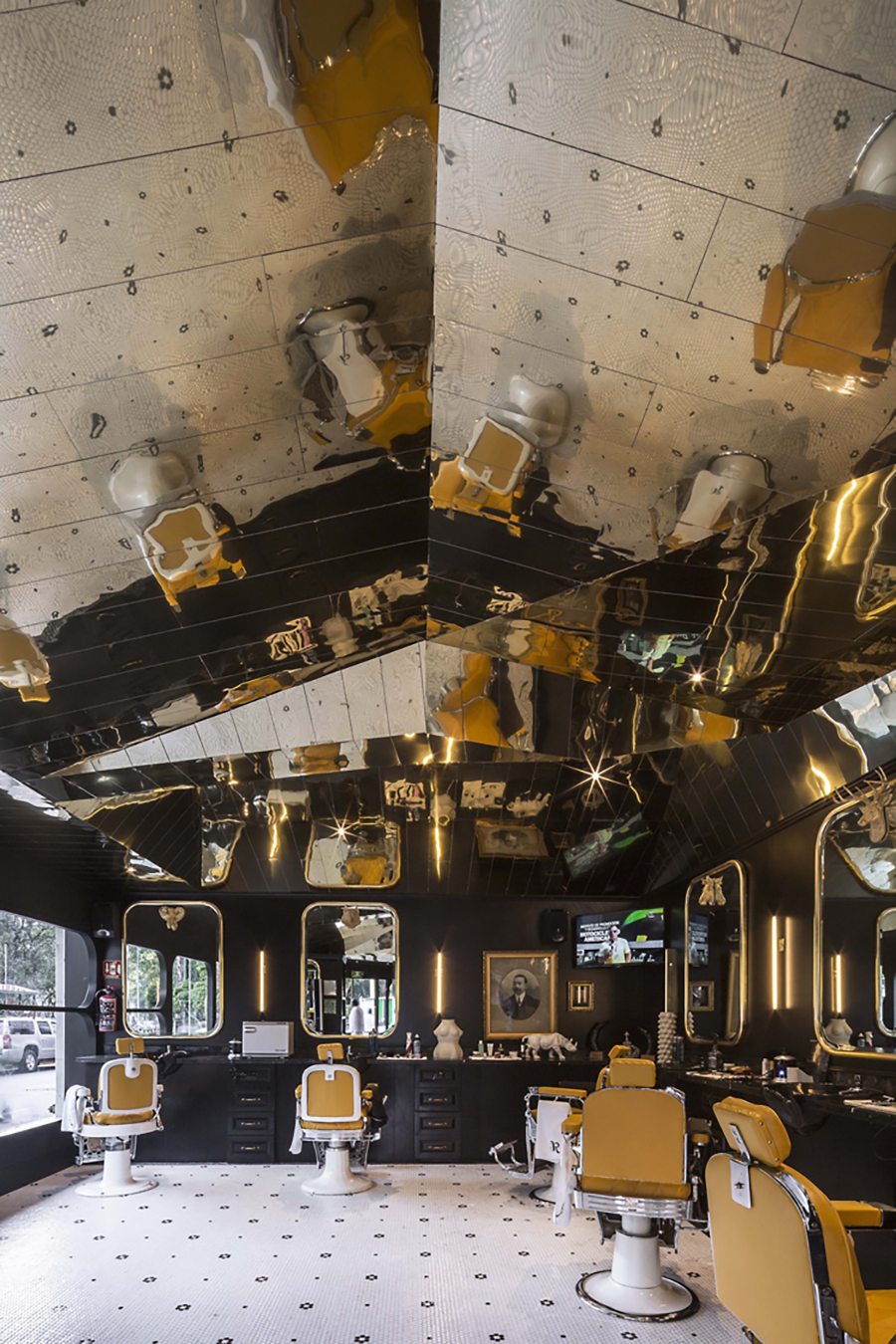 And yes, what indeed would a manly enclosure of contemplative grooming be without a vintage motorcycle (a restored Triumph) or real buffalo head? – Tuija Seipell.