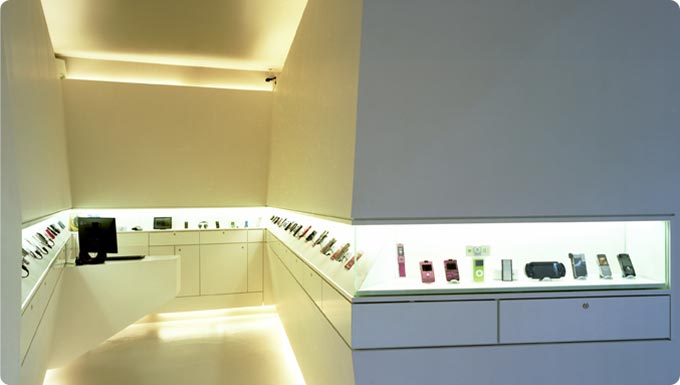 The stark XXS Shop for Mobile Gadgets opened earlier this year inHamburg’s Innenstadt, at Spitalen Hof 8. It is a minimalist showroom byHamburg-based Spine Architects for Etronixx-Trading GmbH. The store is void of practically everything else but white surfaces and the merchandise itself. Mobile gizmos appear almost suspended in air, as they rest in small slots within the white expanse of built-in cabinetry that encircles the entire space. It is an excellent example of forcing the customer – in a pleasant way -to focus on the products, not on the props.

Spine is a German-English partnership that started between Boris B’hre,J’orn Hadzik, Jan L’hrs and Neil Winstanley in 2001 when they won oneof the prizes awarded in the international design competition for RabinSquare in Tel-Aviv, Israel. They are known for their work in severalareas, from housing to public places to TV shows, private homes andshops. In September, Spine Architects opened an office in Menlo Park,San Francisco. By Tuija Seipell