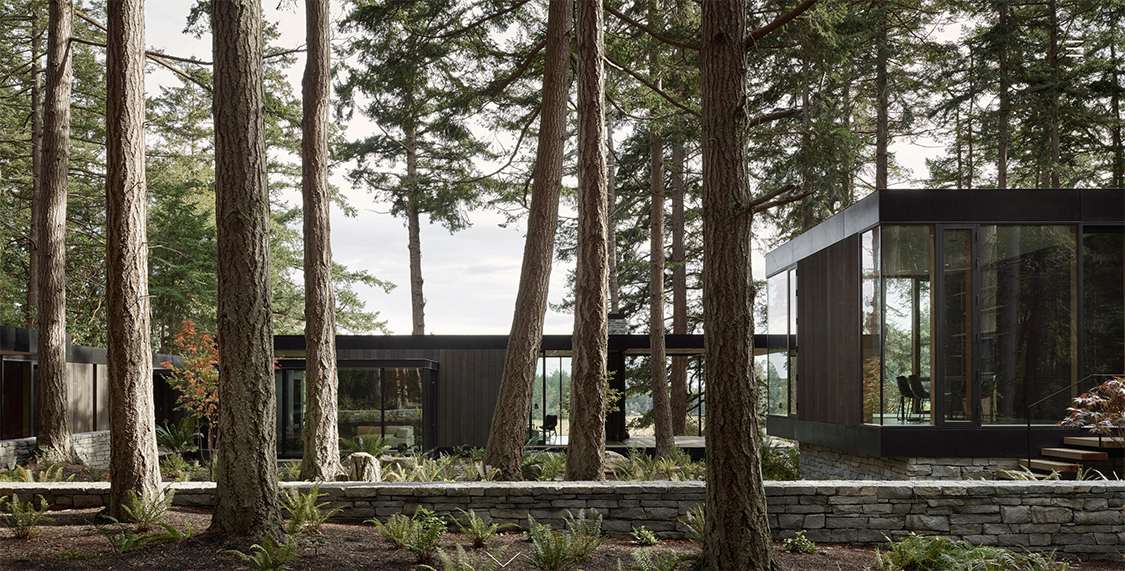 The Pacific Northwest in both Canada and the US is home to several idyllic islands that are known for being partly “old hippie” and partly more industrial or urban. Whidbey Island in the Puget Sound area of Washington State about 50 kilometers north of Seattle is one such island. The south end is known as a hippie stronghold with its artistic communities and small-scale organic farming of livestock, chickens, vegetables and herbs. The north is home to the Whidbey Island Naval Air Station and populated by “navy people.” The island’s total population is about 70,000 people. 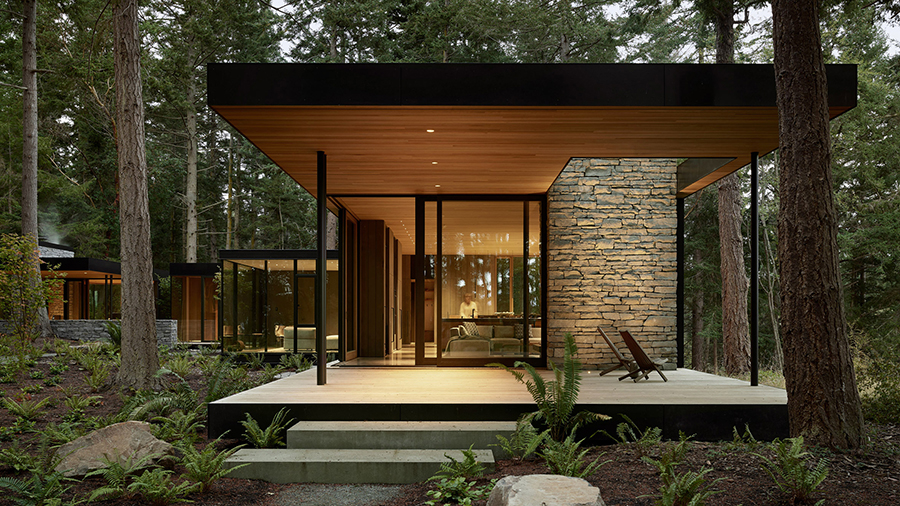 Recently, a family that has farmed cattle in the south end for several generations approached Seattle-based MW WORKS Architecture+Design to design a retreat that would fit the family’s still-working farm site, and become a home for the grandparents and a multi-generational vacation home for as many as 20 people. 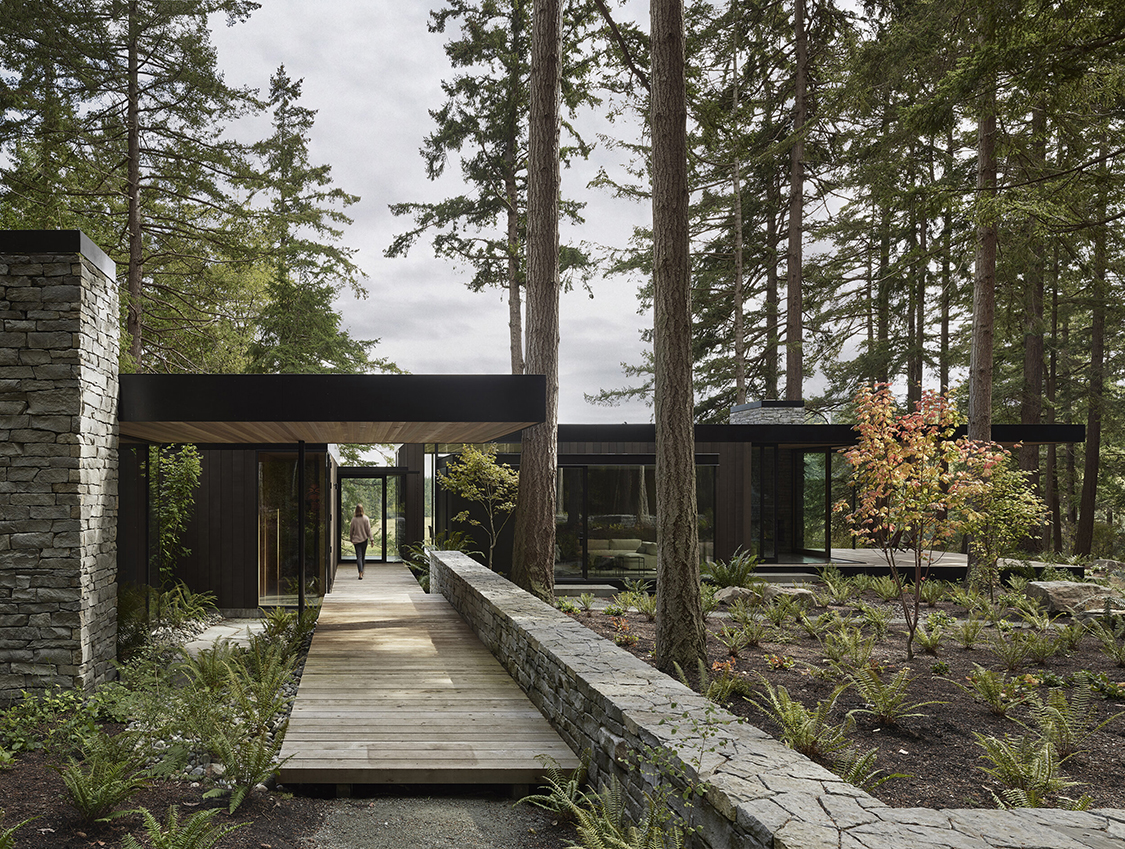 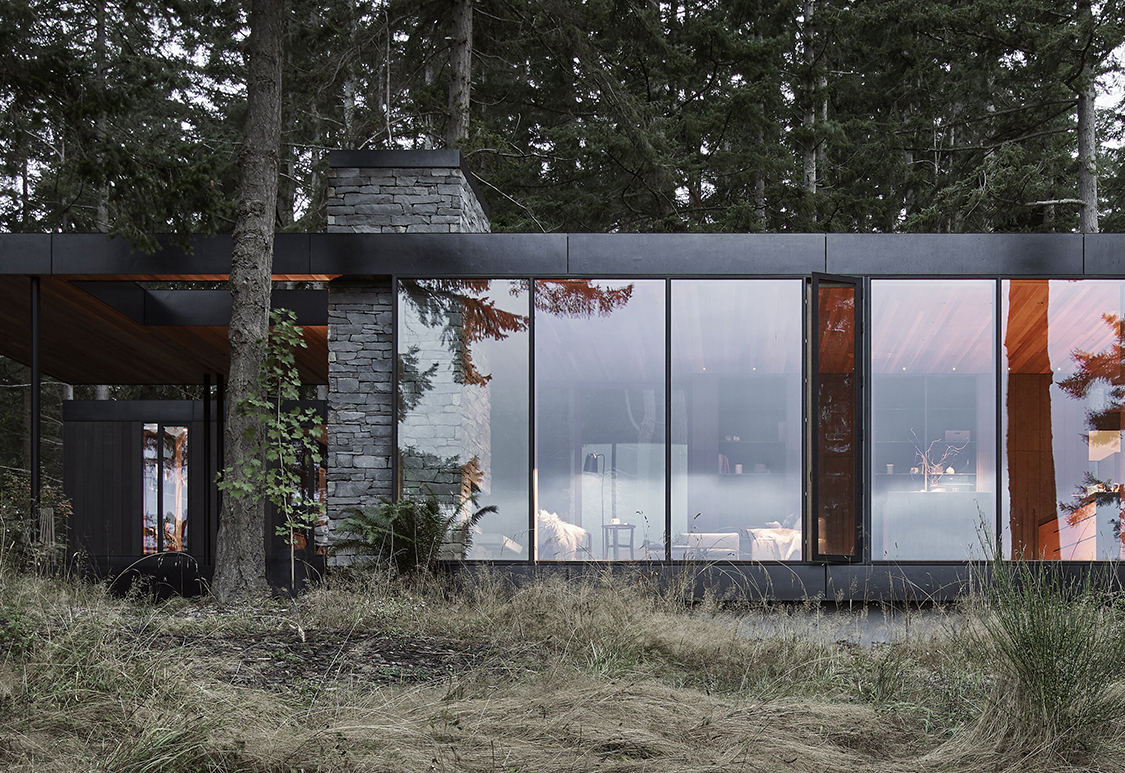 The site for the new house is on a low hill that overlooks the turn-of-the-century red barn, chicken sheds, cattle fields, fishing pond and forest. The site is about 50 acres in size with many mature trees. The architects took their cues from the surrounding nature and designed three unassuming glass-walled units that are grouped around a courtyard. The courtyard is bordered by a low wall made of local, grey basalt stones. 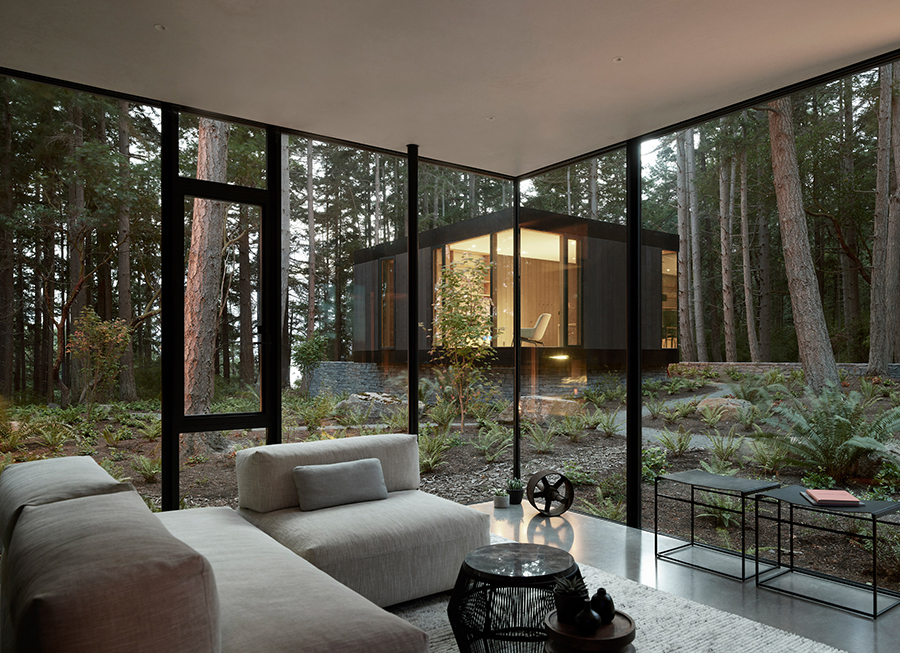 The exterior walls are made of local red cedar siding with large windows taking full advantage of the views. Everything is created to de-emphasize the existence of the house and to ensure that it seems to almost disappear into the scenery. 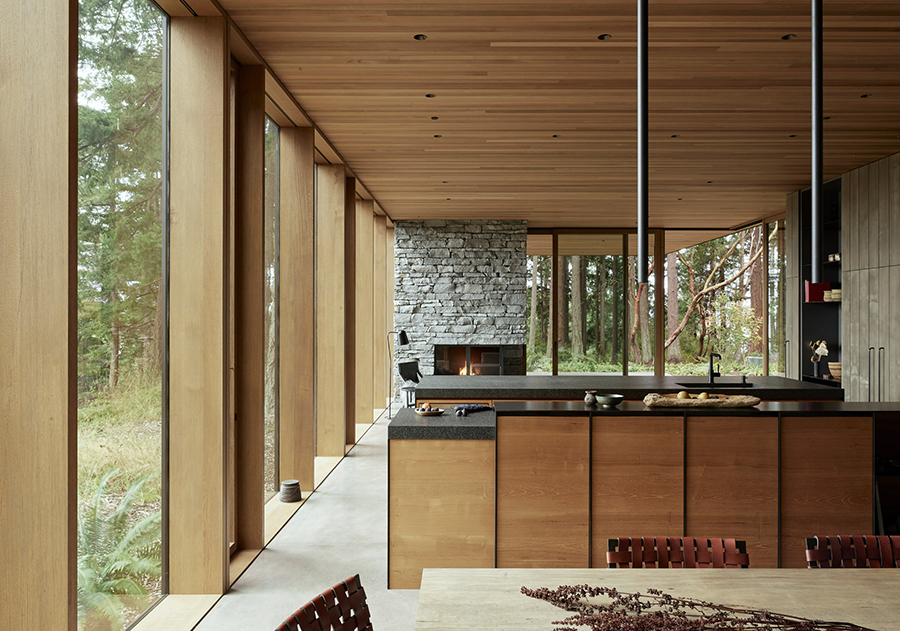 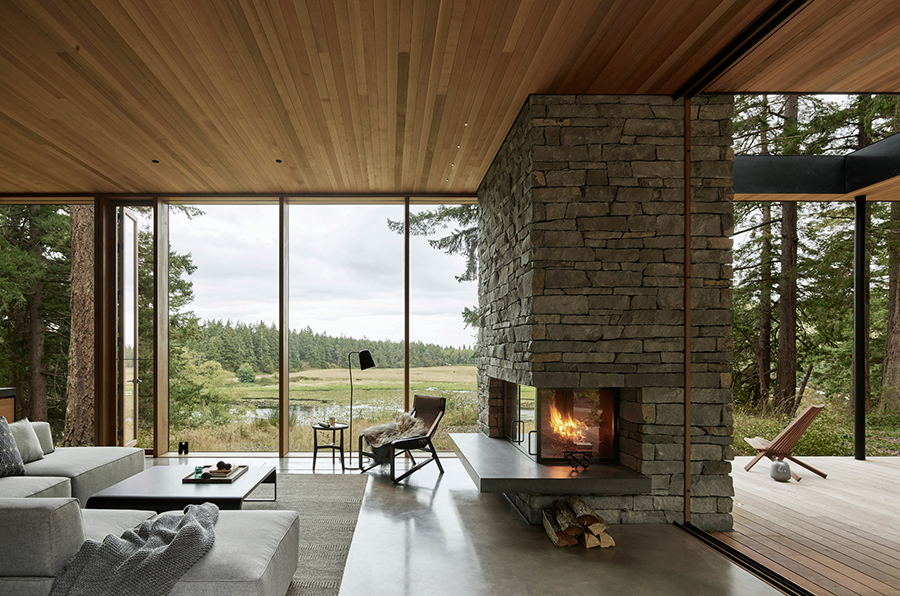 One of the units houses the kitchen, dining area and a living room that extends into a large terrace. The master-bedroom unit includes a basement with laundry facilities and a wine cellar. The third, bunkhouse unit, has a ground-level garage plus a lounge area in addition to the sleeping quarters. 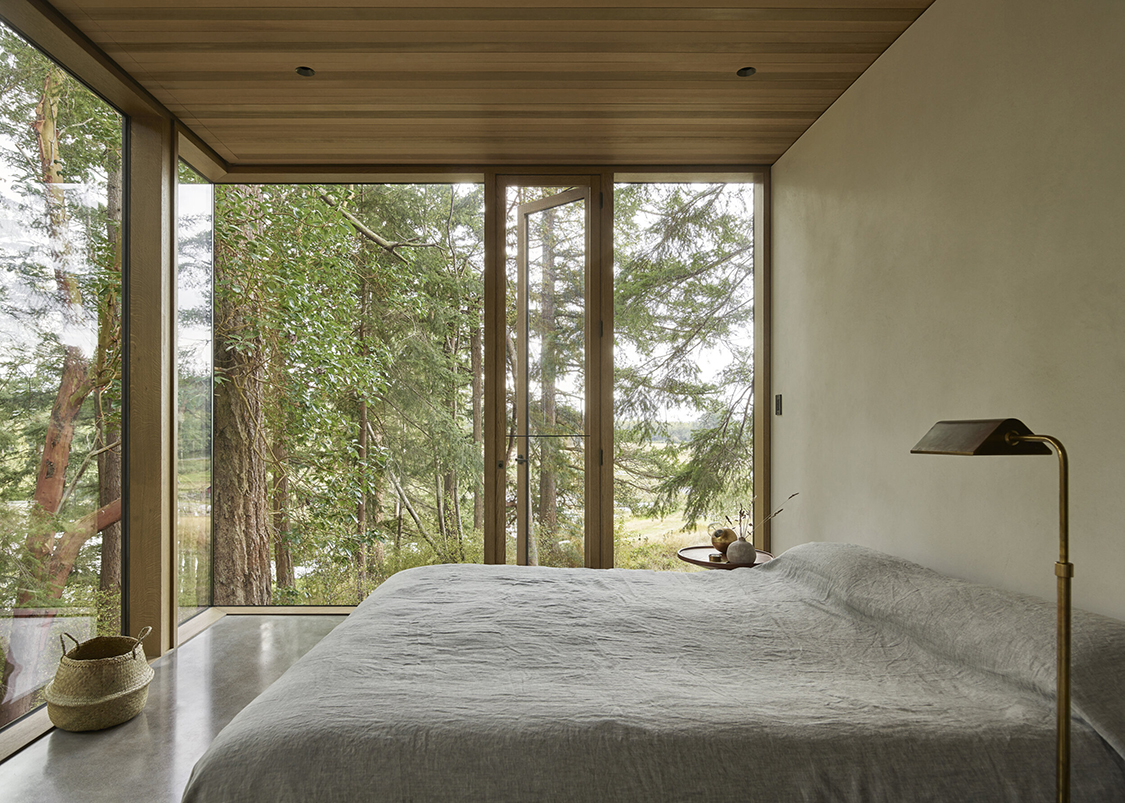 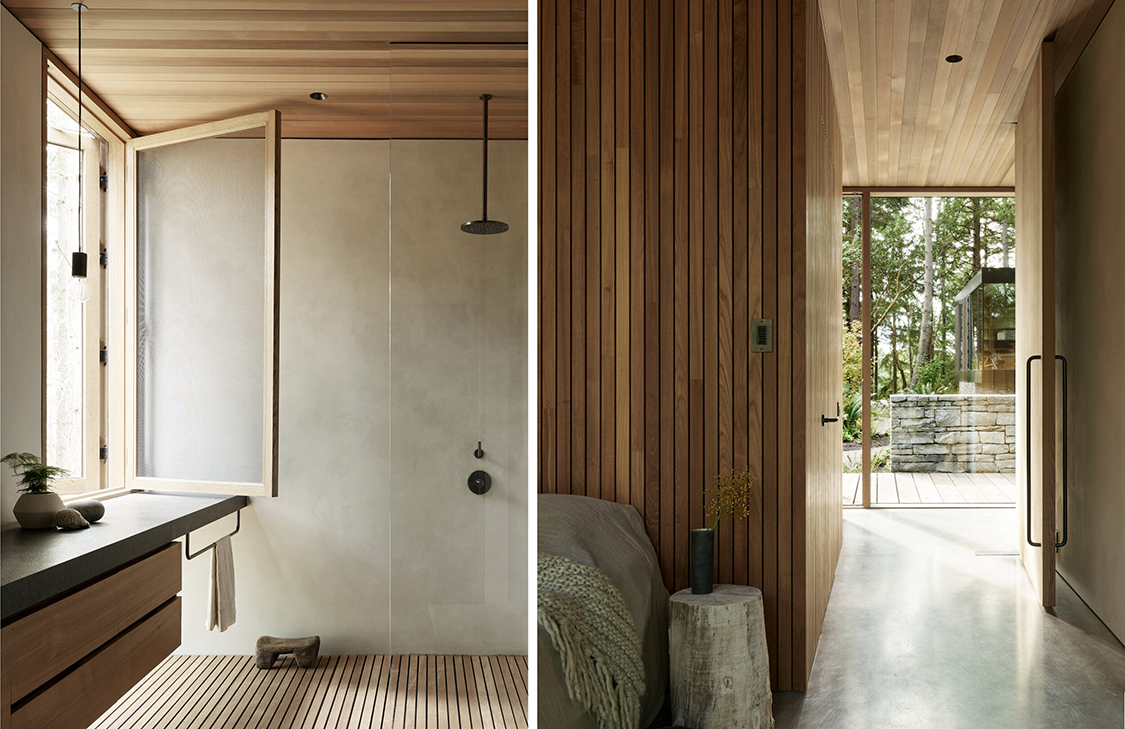 Several of the interior doors and wall art are carved solid cedar slabs crafted decades ago by the family patriarch as a young doctor filling his time between patients. In the new house, a solid plank cedar door in the master bedroom awaits as his next carving project for the possible free time he may have in between working the land, clearing brush and raising organic cattle. 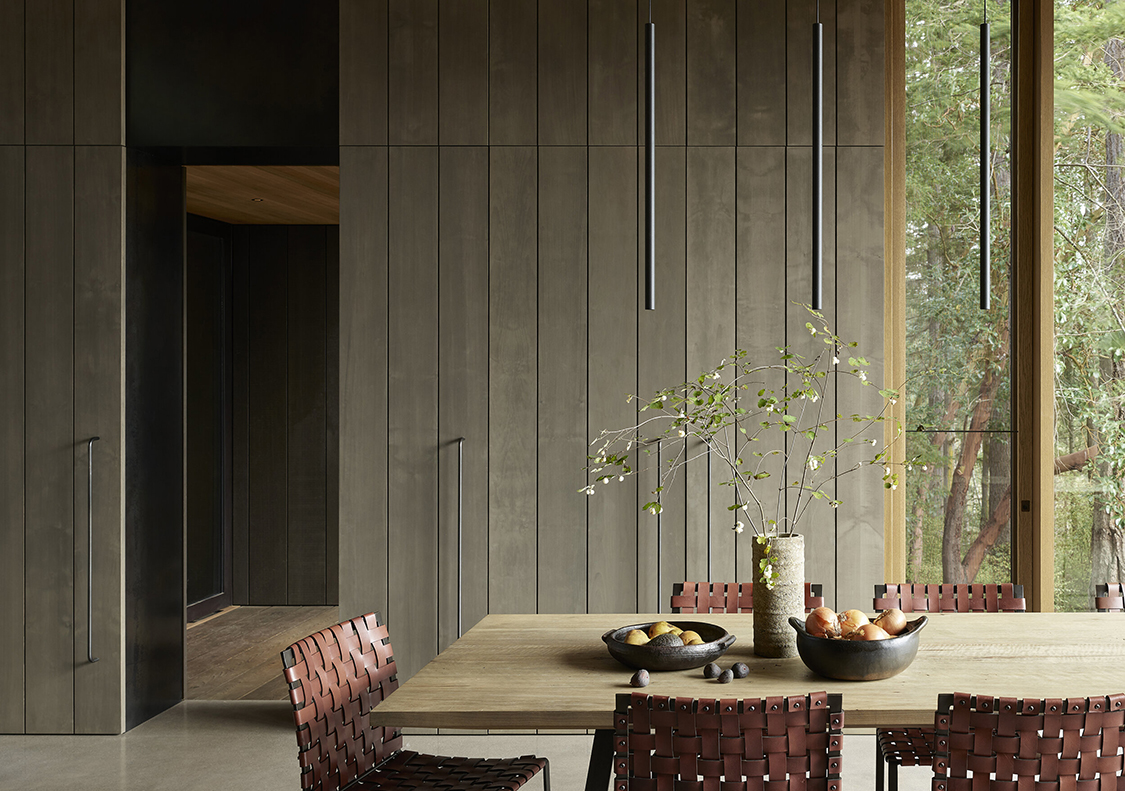 Briony Walker of MW Works tells The Cool Hunter that the project was special in many ways. “A value that persisted most clearly through the entire process was the respect for the history and integrity of the land, and for the people who have lived and worked on it,” she says. “The building footprint, as well as the construction process, took great care to preserve as many significant trees as possible so that the natural forest system would be preserved and allowed to thrive soon after construction was complete,” she adds. “The floor plan of the home meanders through and knits into the forest, embodying care and deference to this timeless landscape, serving as a visual record of an integrated way of building and living with nature. The level of appreciation for the craftspeople is shown in a custom bronze plaque that lists the name of every person, every craftsperson and carpenter, who significantly contributed to the house design and construction.” 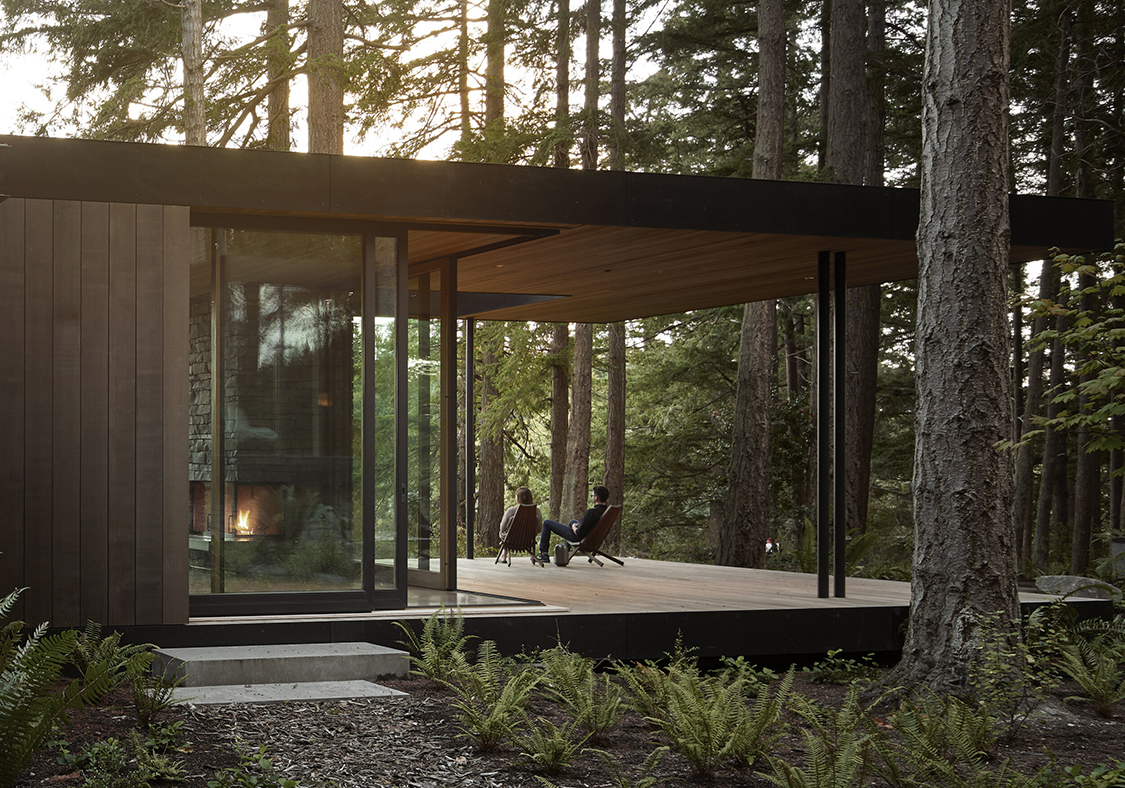 MW WORKS Architecture+Design was established in 2007 by Steve Mongillo and Eric Walter who met while working at the Seattle office of Bohlin Cywinski Jackson. Tuija Seipell. 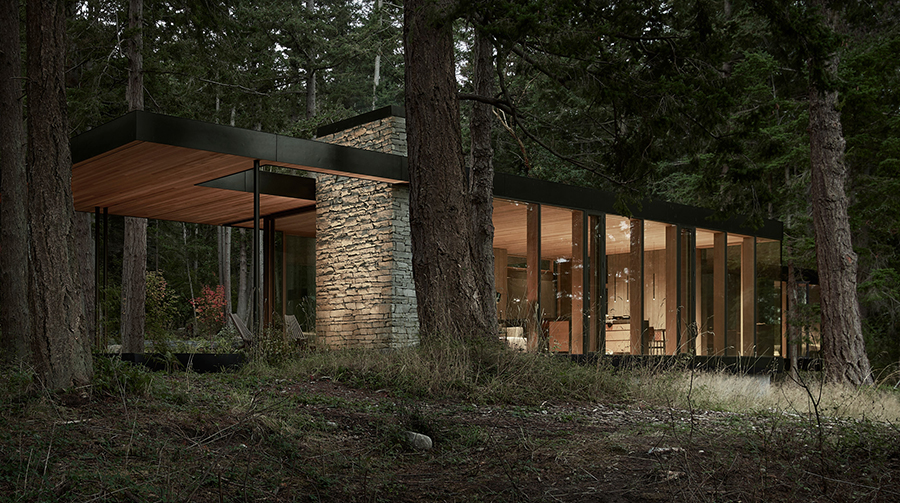