The ‘Chalet’ is by far the most famous product of Swiss architecture. The wooden dwellings with sloping roof and over hanging eaves, are as much a part of the Swiss landscape as theAlps themselves. The single storey bunkers traditionally served as seasonal farms for dairy cattle in the summer months, and haven’t changed much since these humble beginnings.
But high up on a mountain pass in the Bernese Oberland, a new type of seasonal home has emerged as a stark contrast to the timber heavy squats the country is so famed for. With its back turned to the harsh northerly winds, this contemporary take on the log cabin straddles the vistas to the south via a huge five meter glass pane that invites the landscape to fill its vast, open plan spaces. 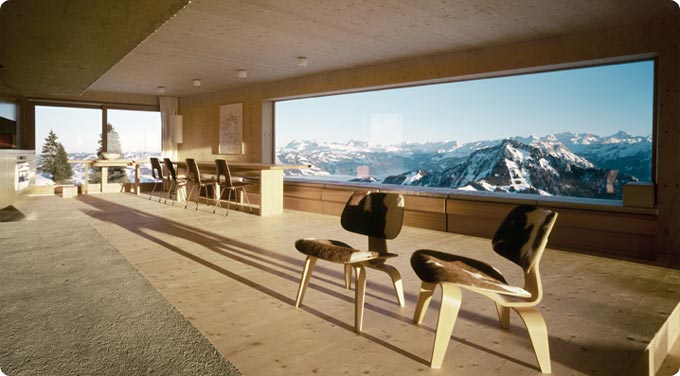 Swiss planning regulators favor lots of small, pokey windows, this house is anything but. Rather than shielding its inhabitants from the outdoors, the house embraces the mountainous terrain, with large glass doors opening out onto the wooden terrace that appears to float alongside the house.
With its elegant, concrete slab base, it juts out into the landscape like a beached vessel. The domineering fireplace runs through the core of the building, dragging its brutal lines from the basement to the roof three floors above.

Up the handsome open-tread staircase the bedrooms and bathrooms blend into a continuous passage that invites you to keep moving. The large, panoramic windows throughout keep the house light and airy,while the double insulated walls and thick wood decking keep the cool temperatures out. The sparse furnishings and sleek lines are a bold statement that matches the buildings unrelenting exterior. Rather than cluttering the house with gaudy ornaments and stuffy fixtures, it playso n the sparse landscape it so elegantly sits in.
Traditional chalets have a tendency to shy away from the landscape,sealing off its inhabitants to the beauty of the environment it inhabits. This building however, embraces the countryside with an unyielding arrogance and swagger. Perching precariously at thetip of a mountain, it stares boldly at its surroundings. The interior eschews its contemporary credentials with clean, simple lines and muted colors. But at the same time, it feels traditional,homely, and welcoming. A small homage to the portly abodes that continue to dominate the Swiss landscape. By Matthew Hussey