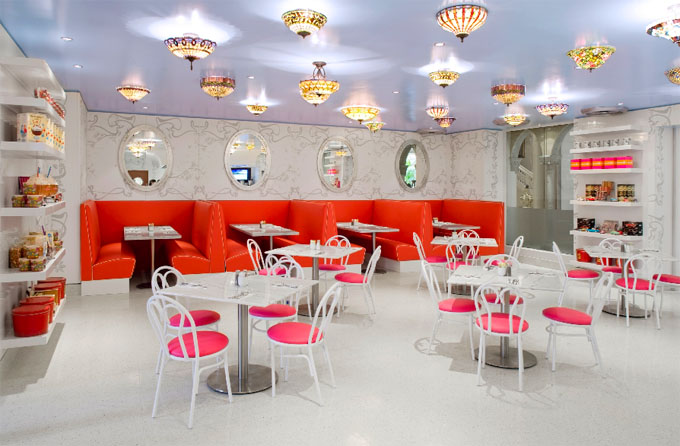 Posh is probably the best word to describe the venerable Boca Raton Resort & Club in Florida. Expecting only pastelly and fussy colonial style, we were happy to see the fun decor of Serendipity cafe, just opened at the luxury resort. But we really shouldn’t be surprised. This cafe is the second only outlet of New York’s super-famous Serendipity 3.

It is the cafe with the crazy Alice-in-Wonderland decor that was opened in 1954 in New York (on East 58th and later moved to East 60th) by three party-hosting young men, Patch Caradine, Calvin Holt and Stephen Bruce. In addition to serving mad dessert and ice cream treats, they also offered – and still do – an extensive family-friendly menu. Celebrities of all kinds are regulars. In 2001, a movie was named after the cafe and starred John Cusack and Kate Beckinsale.

The Boca Raton outlet is the first time the 54-year-old Serendipity has been lured outside New York, so we assume they have really thought this out. Certainly the new 1,200-square-foot space looks amazing with its ice-creamy colors and signature light fixtures. .We’ll drink an Apricot Smush for that. – Tuija Seipell