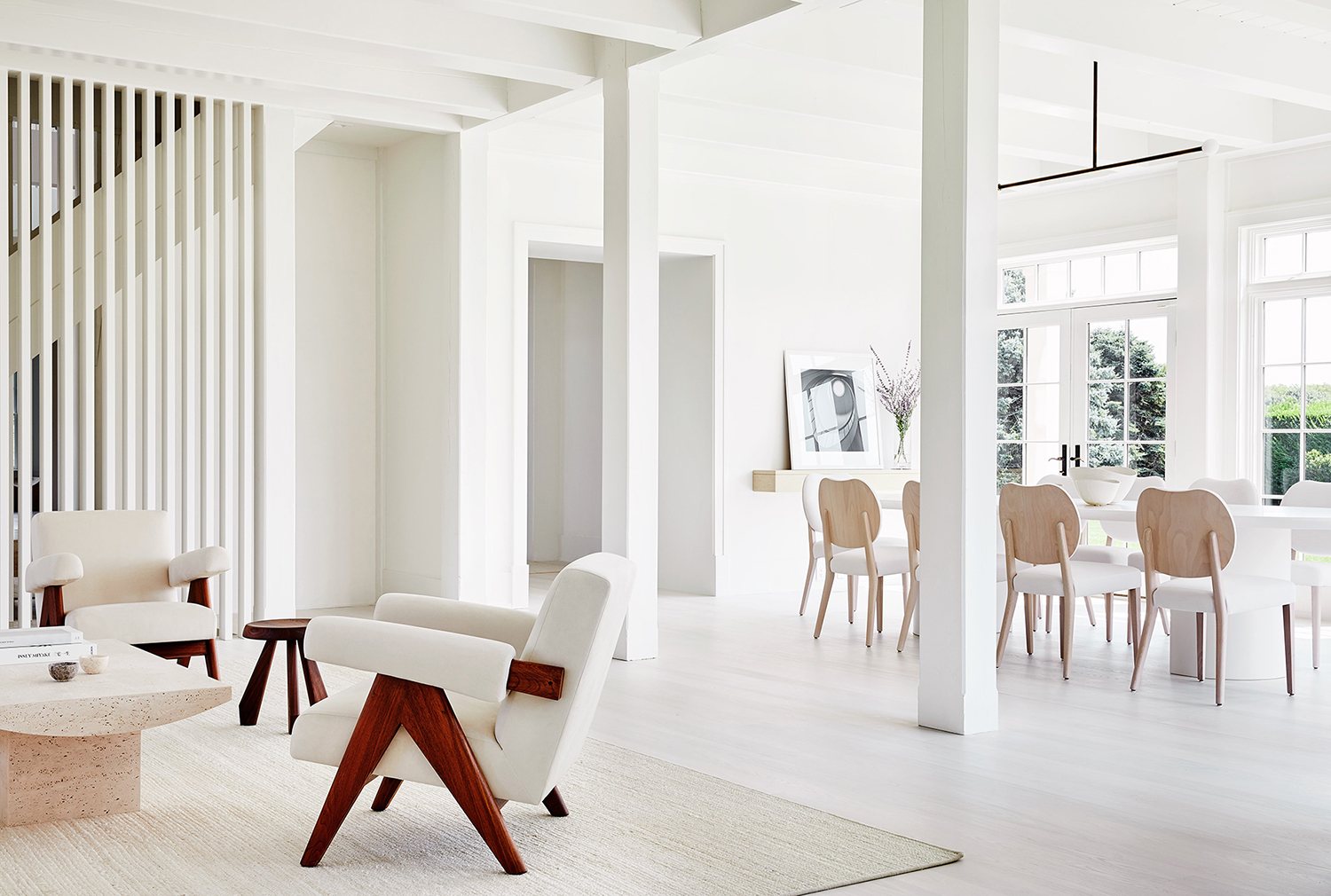 In this exclusive enclave, former fashion stylist Kay Olivia Keren and Ryan Jackson, principal of the real estate firm Stellar Management, located their future weekend home. With their two small sons the couple was looking to put down roots in the area where  they had spent countless happy weekends in the past decade. 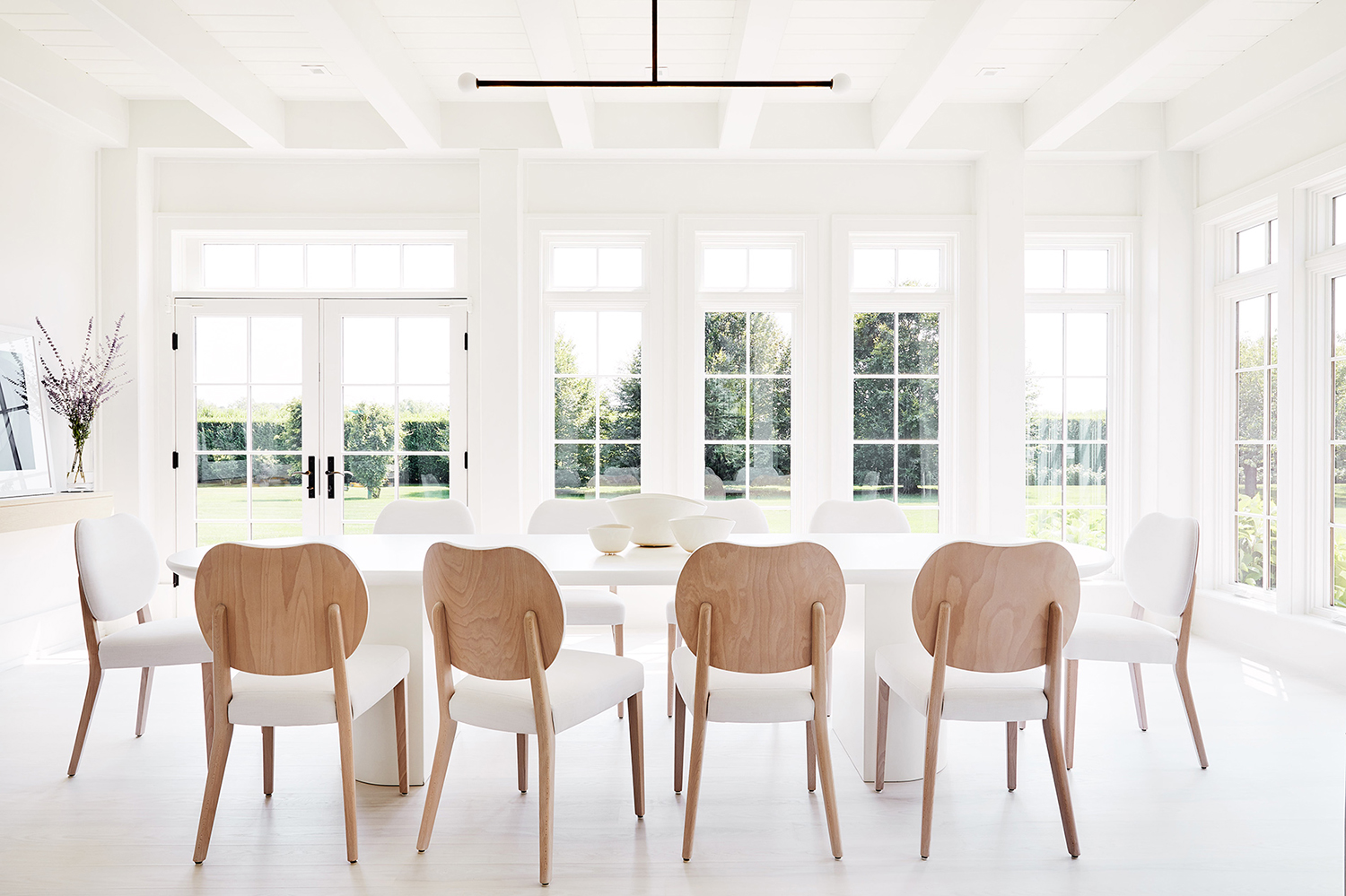 They found their dream weekend home in an unassuming shingle-clad house built in 2003 and set on three acres of former farmland. The 9,000-square-foot (836 sq. m.) house is located only a short bike-ride from the ocean. 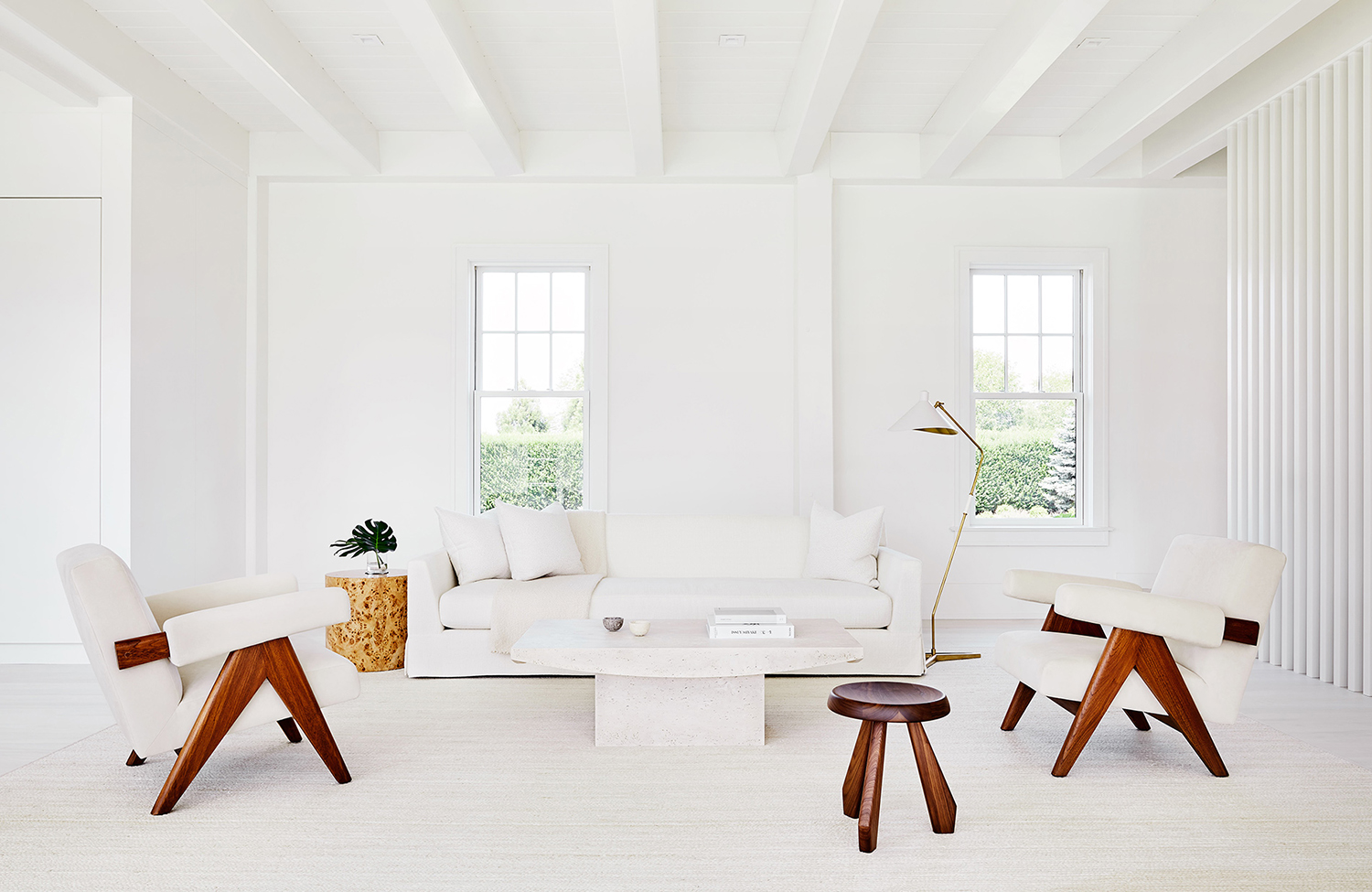 They felt the outside was perfect with its classic Hamptons-style post-and-beam frame, gabled roof, cedar-shingle cladding and stacked-stone chimneys. The outside would do, but the inside was going to experience a dramatic transformation in the hands of the New York-based Workshop/APD.

Led by founding principals Andrew Kotchen, Matt Berman and principal architect Thomas J. Zoli, the team at Workshop/APD is known for meticulous and demanding projects. For them, this was a welcome challenge and they were not intimidated by the extreme minimalism requirement the owners established right at the start. 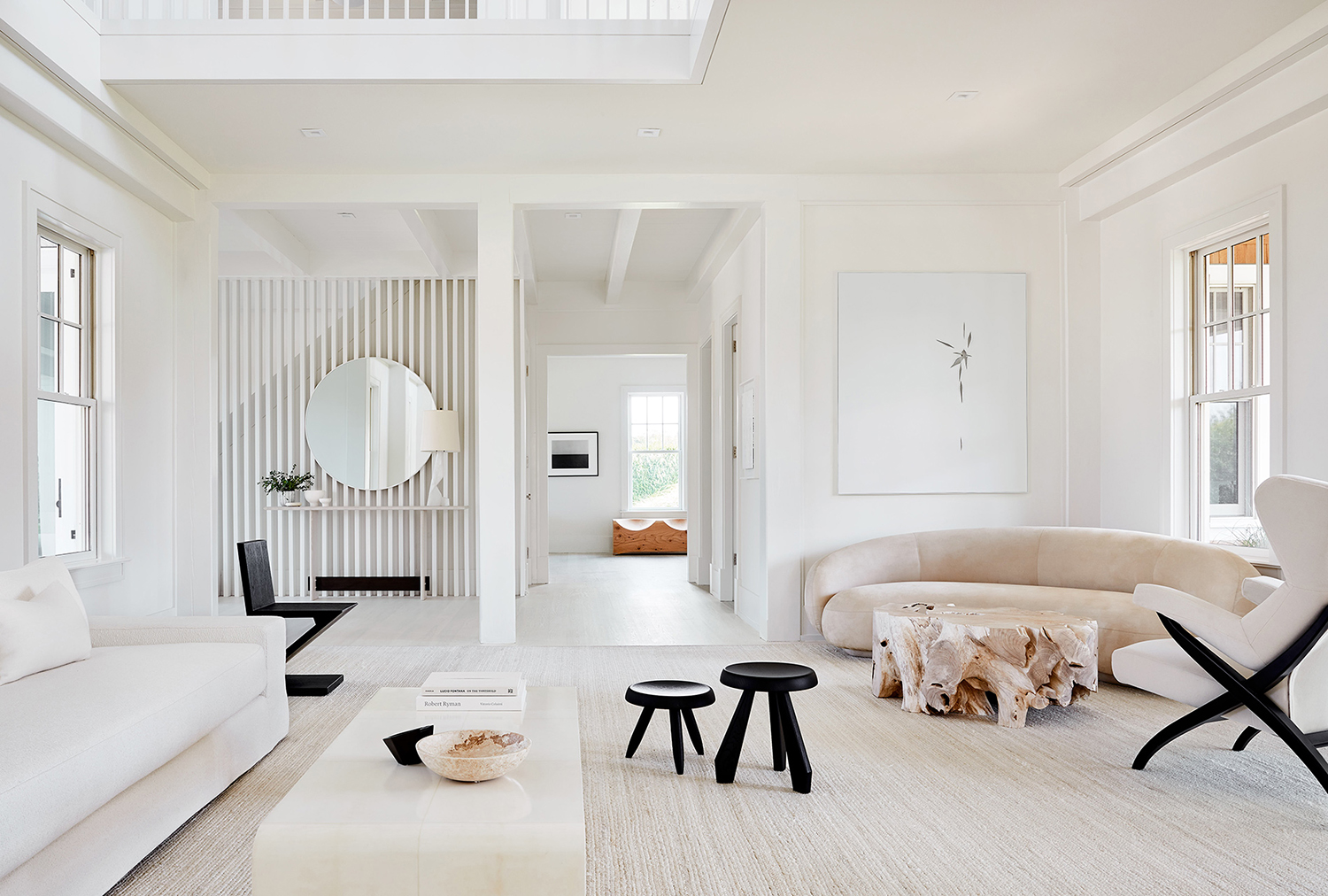 Originally, the interior was cramped and void of character but the new owners were going to make sure all that fuss and claustrophobia vanished before they moved in. No excess, only absolute simplicity.

The result is a stunning all-white house that exudes dreamy beach vibes and casts each piece of furniture and art in a starring role. Enveloped by white floors, walls and ceilings, the striking wood details, light fixtures and art bask in the natural light pouring in from the large windows. 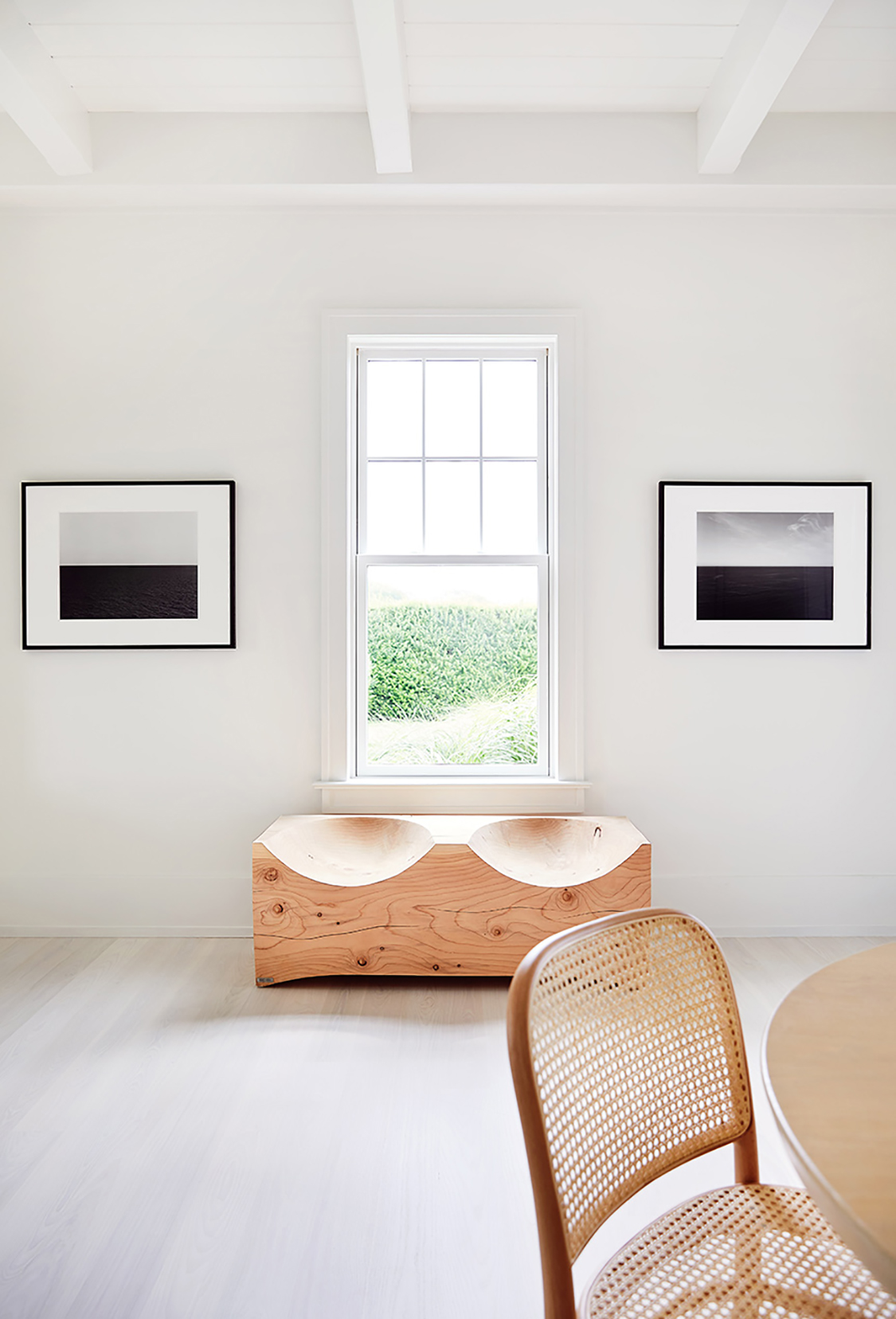 Describing the project, Workshop/APD director of interiors Michael Ellison has spoken about 50 shades of white and a handful of sand. Each grain of sand is of different colour but when you look at it all together, it is one unified colour of sand. This is what the designers aimed for and achieved at this summery residence. 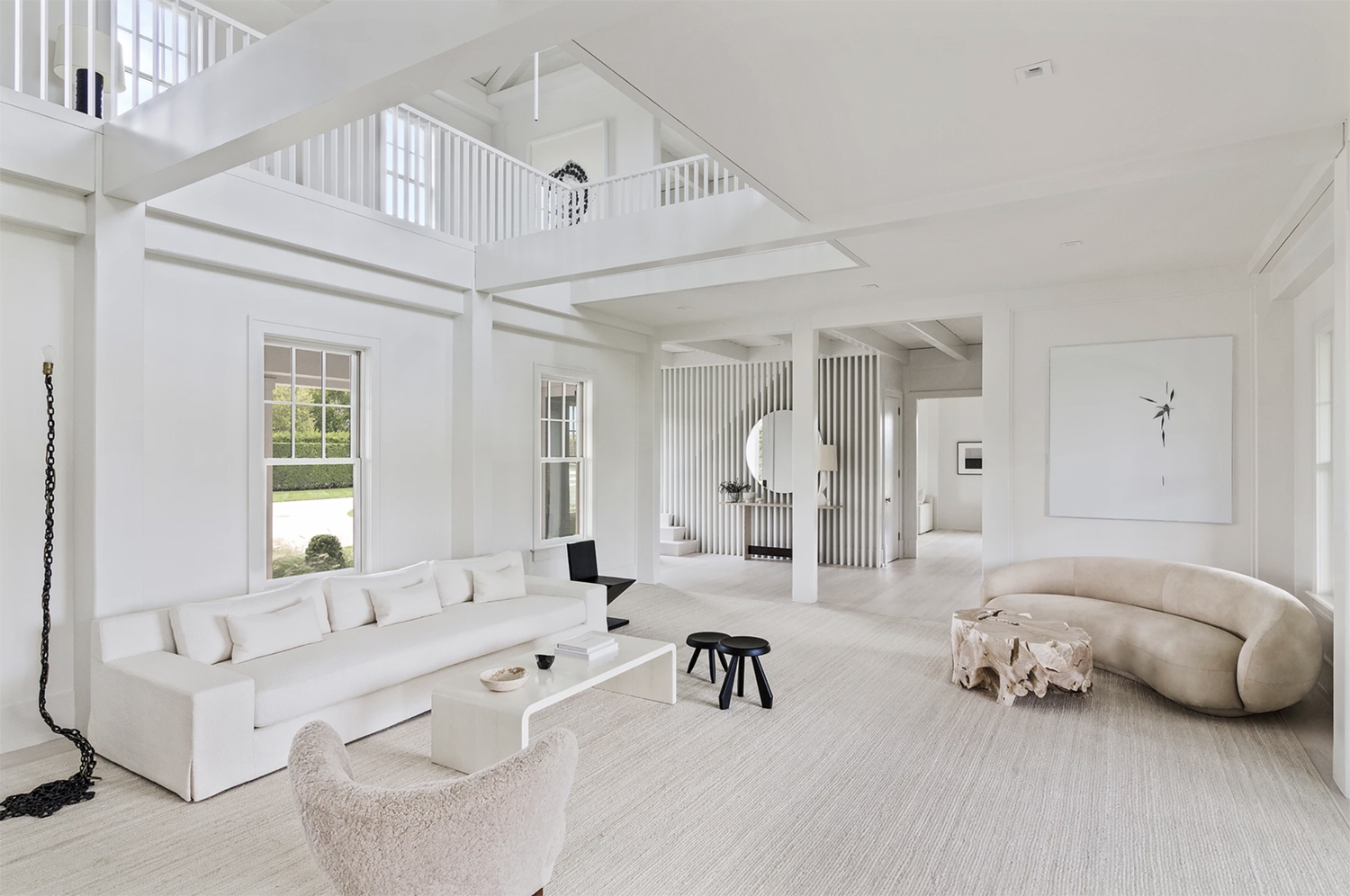 We love the driftwood-inspired pieces, the furry and fuzzy textures of some of the seating and the elegant colour variety of the wooden legs of the chairs and stools. The lighting adds a layer of modern touches while the windows dominate as the overall light sources. 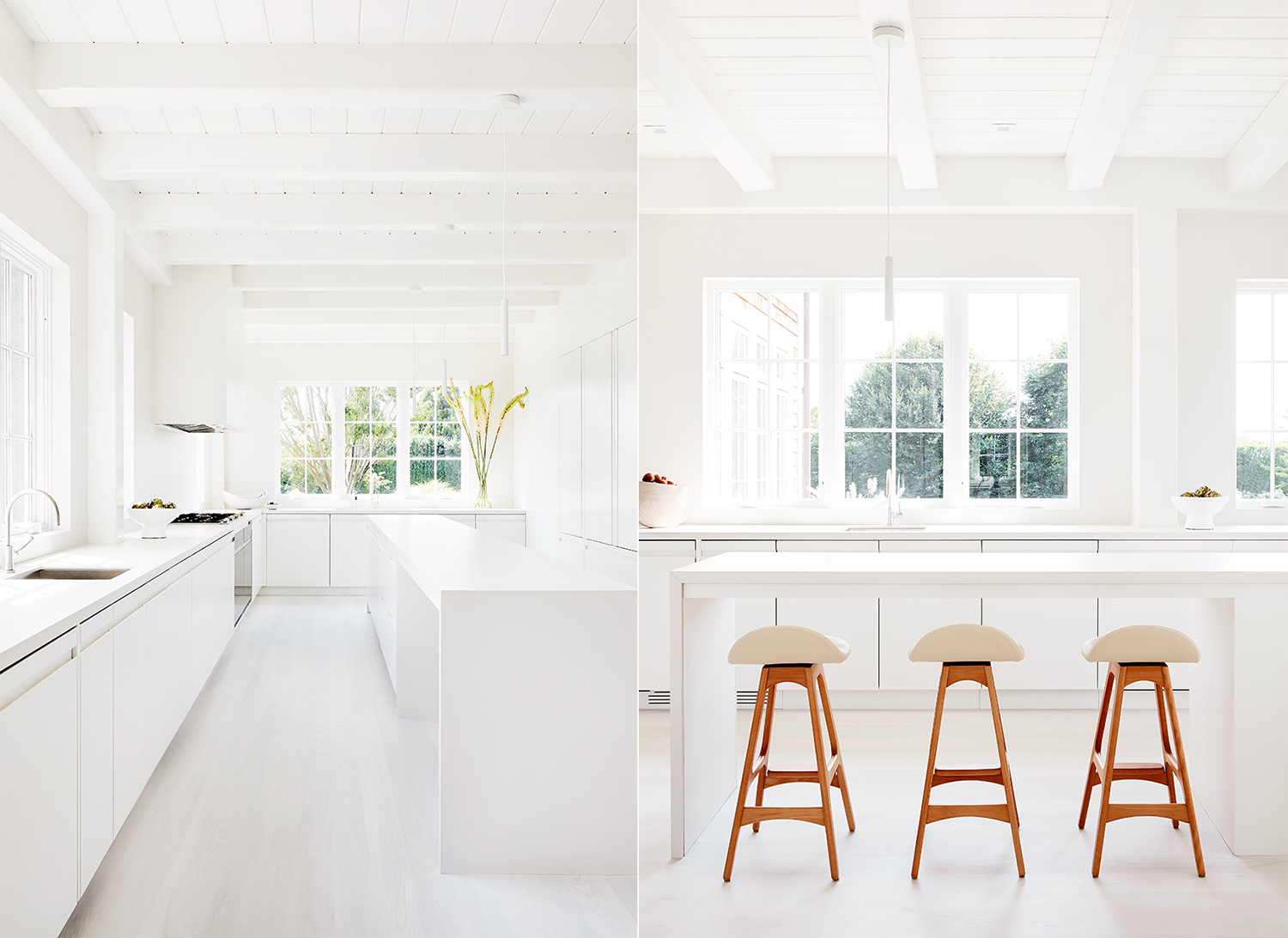 The designers knocked down the ceiling of the great room elevating its height to 28-feet (8,5 metres) and exposing the post-and-beam structure. They also re-built the existing masonry fireplace that now towers the full height of the space like a modernist pillar of white salt drawing the eye to the ceiling.

The custom-skirted sofa is upholstered with Castel’s Sabine fabric, the Fiorenza lounge chair is by the Italian architect Franco Albini and the Waterfall coffee table was made by Gal Shevach in New York. 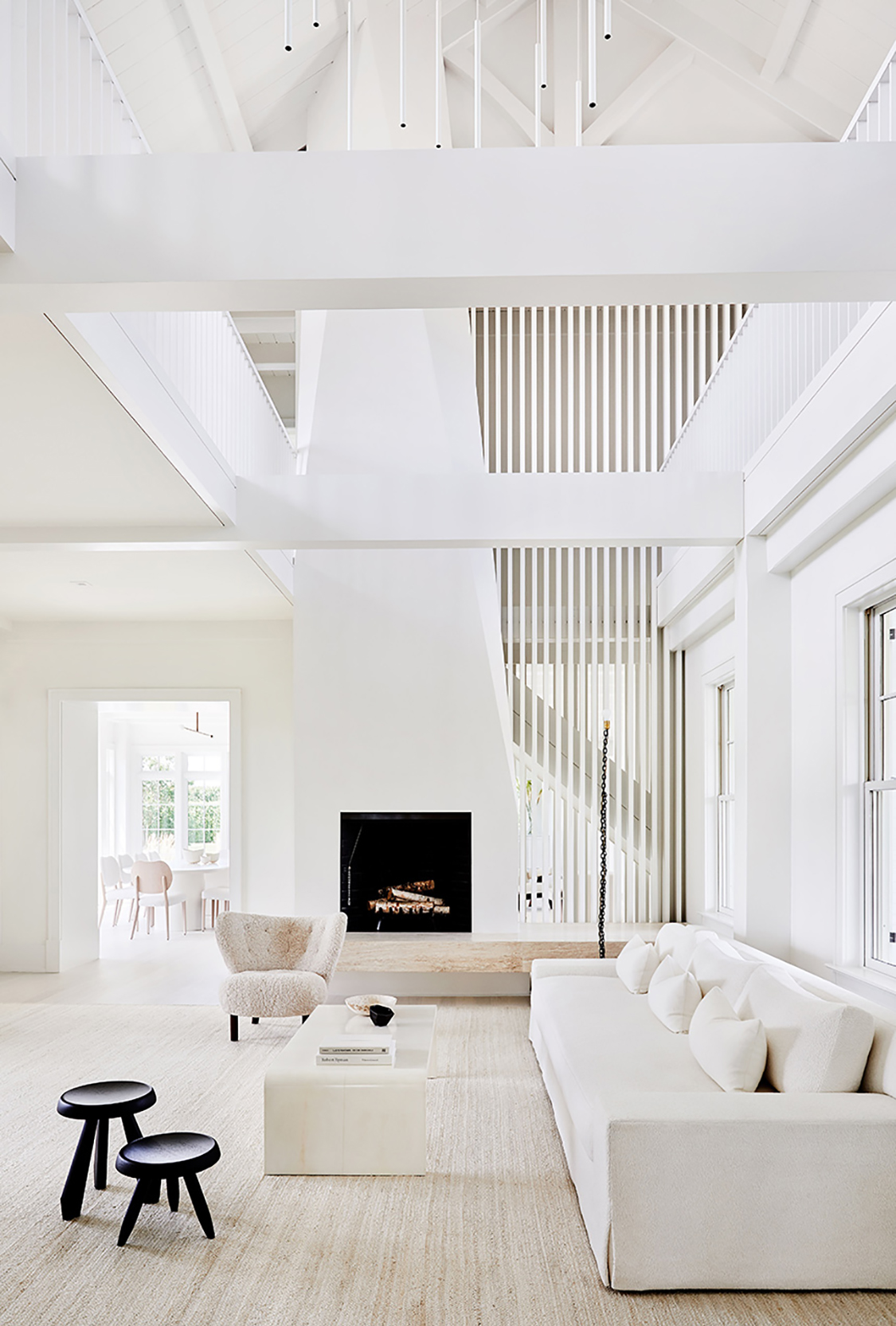 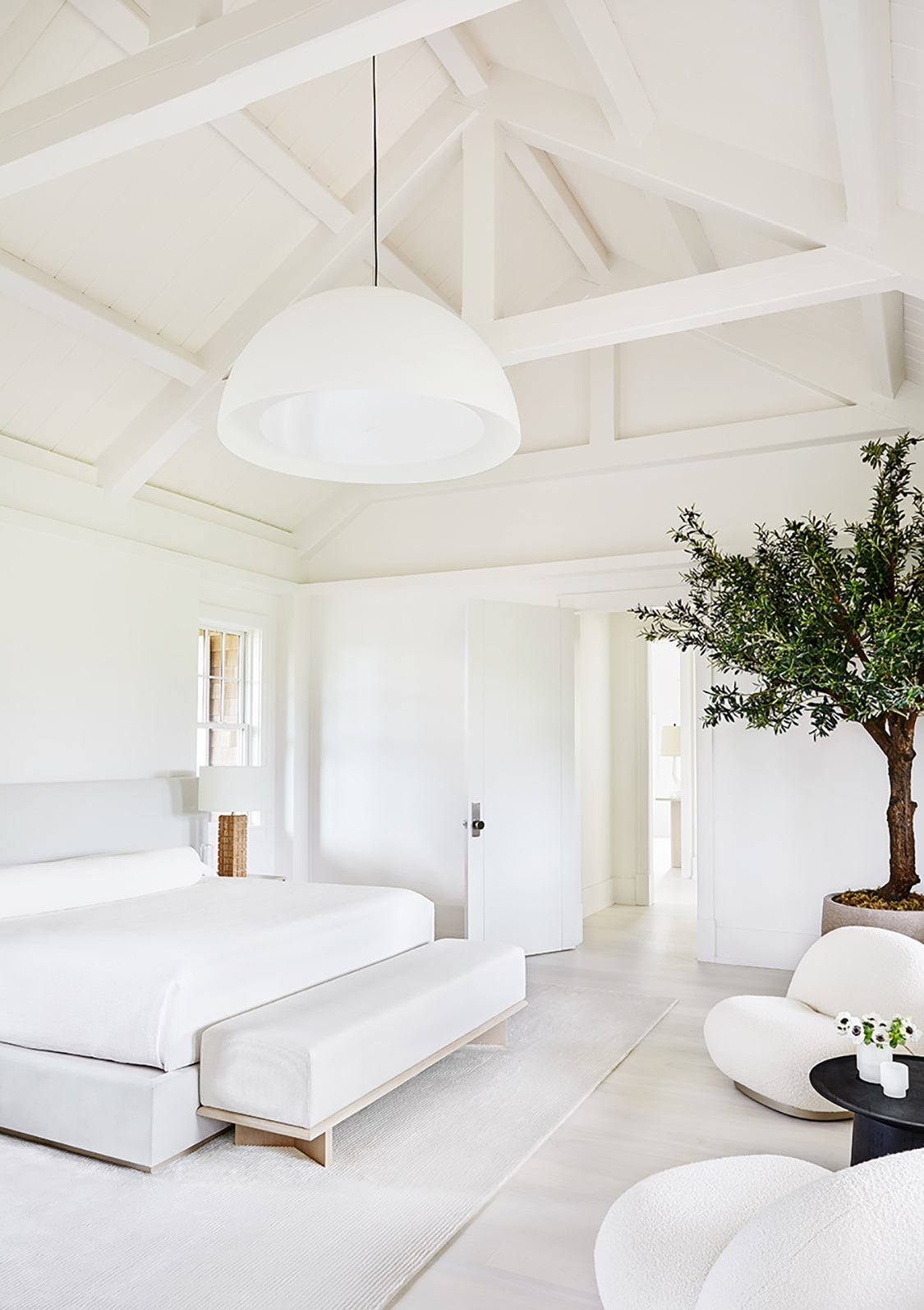 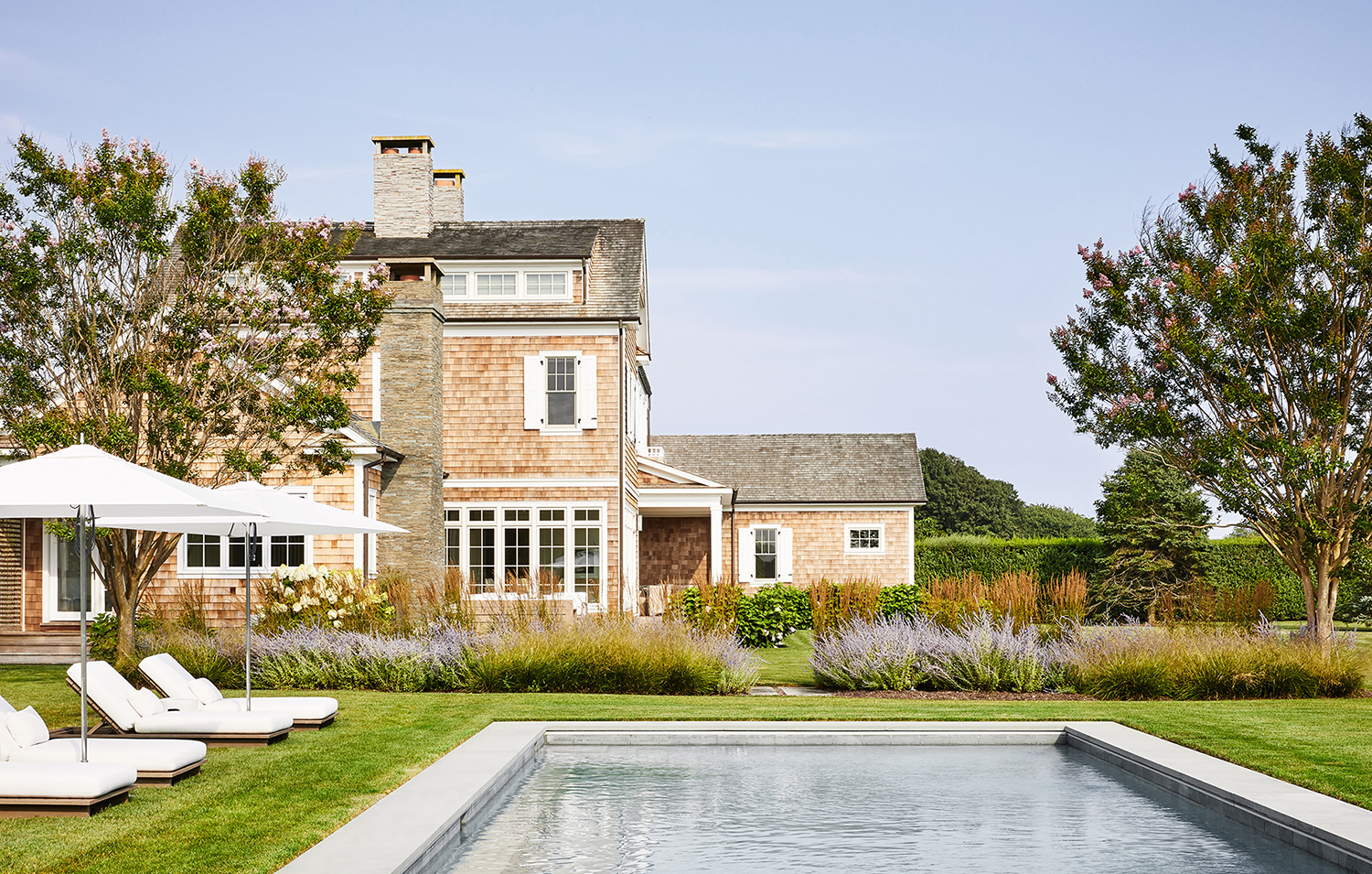 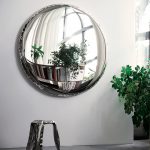 The Solid Donut Mirror is made of stainless steel polished to high gloss. The mirror is an object that, thanks to its reflecting nature, plays with human perception and creates an impression of being an actively watching entity. It is a light-weighted sculpture inspired by organic liquid-like forms and resembles a huge droplet of silvery mercury. Hanging on the wall, it looks like it was floating a few millimetres next to it, just like a water drop on the glass surface.