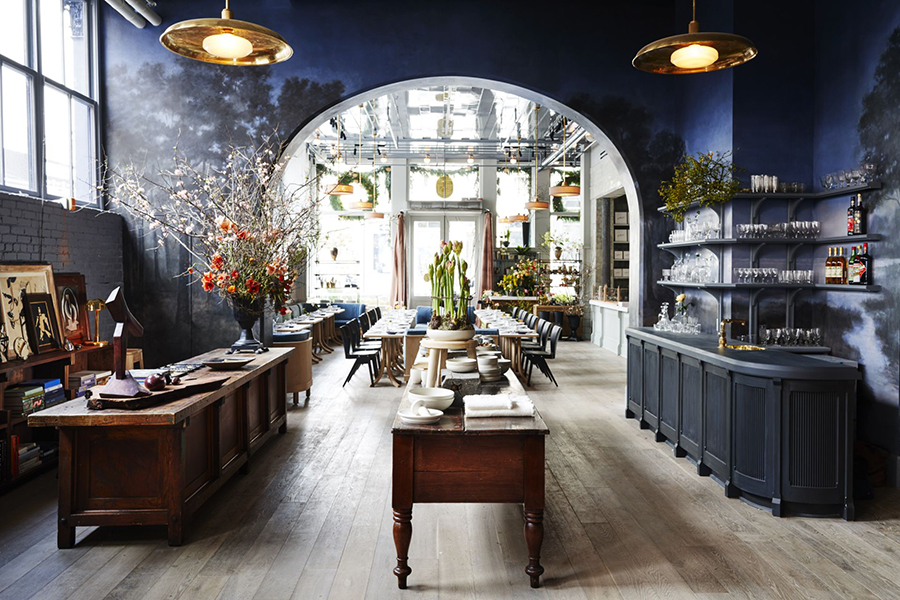 We are all getting tired of clinically sterile, copycat concept stores that seem lifeless and completely void of adventure, story or history. And the sameness seems to be getting worse.

In a mall or high street one cannot tell one brand from another. Stores display the same colors, the same styles, the same products, the same materials – probably all made in the same place, too, somewhere in Asia.

Nothing inherently wrong with any one aspect of it except that it all adds up to a mind-numbingly boring experience. No wonder, then, that the only thing that seems to excite customers is a sale. 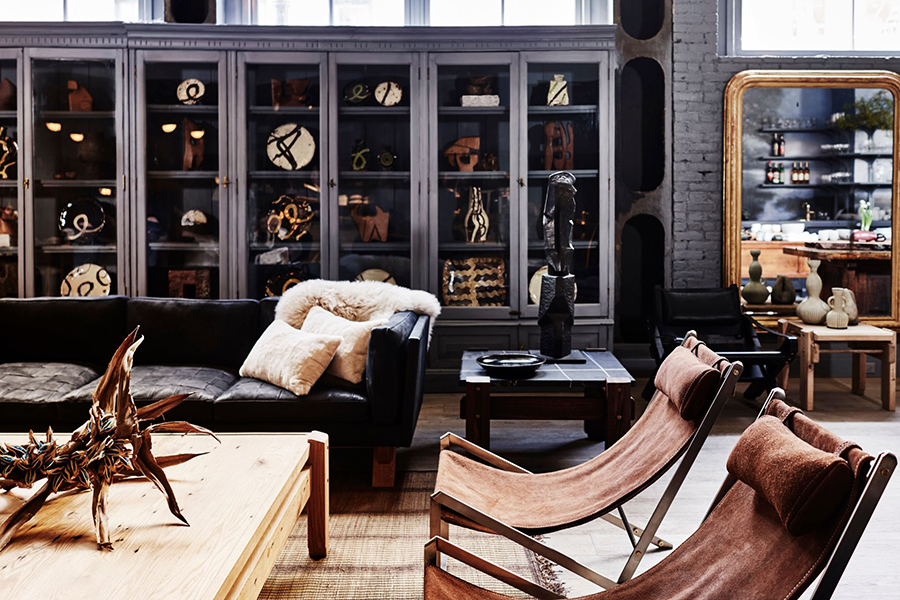 So, it is not surprising that we – and thousands of others – have already fallen in love with Roman and Williams Guild opened recently in a former Citibank space at the edge of Soho in NYC on the corner of Mercer and Howard Street.

It is a two-story, 7,000 square-foot (650 sq. metre) retail concept that is not just retail and not really a concept either, at least not in the tired, over-used meaning of the word. 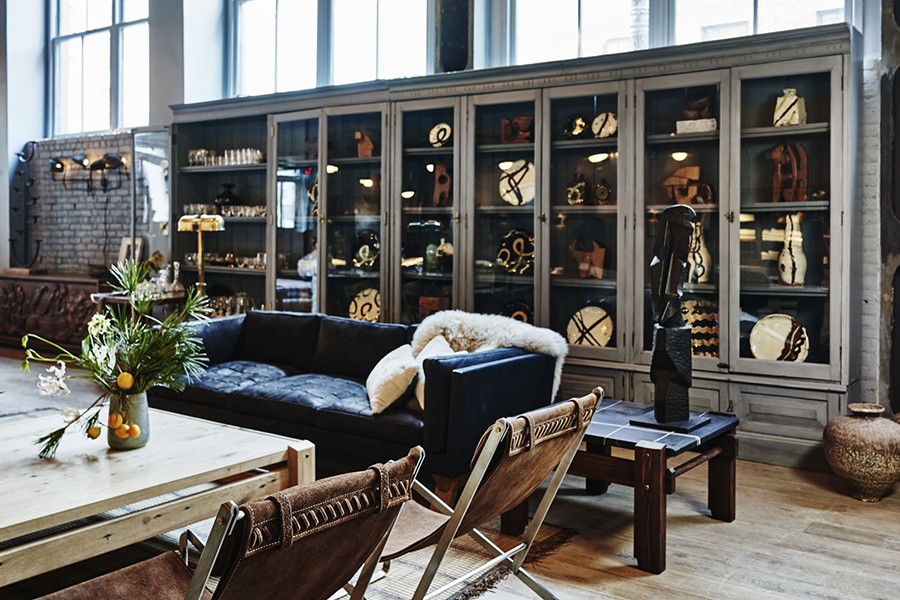 We are tempted to describe it with another cliché: emporium. But perhaps here that old term really does serve a good purpose as the Guild does remind us of well-loved indoor food markets and bustling halls, souks and bazaars, and old merchant warehouses full of tribute from distant and exotic lands. 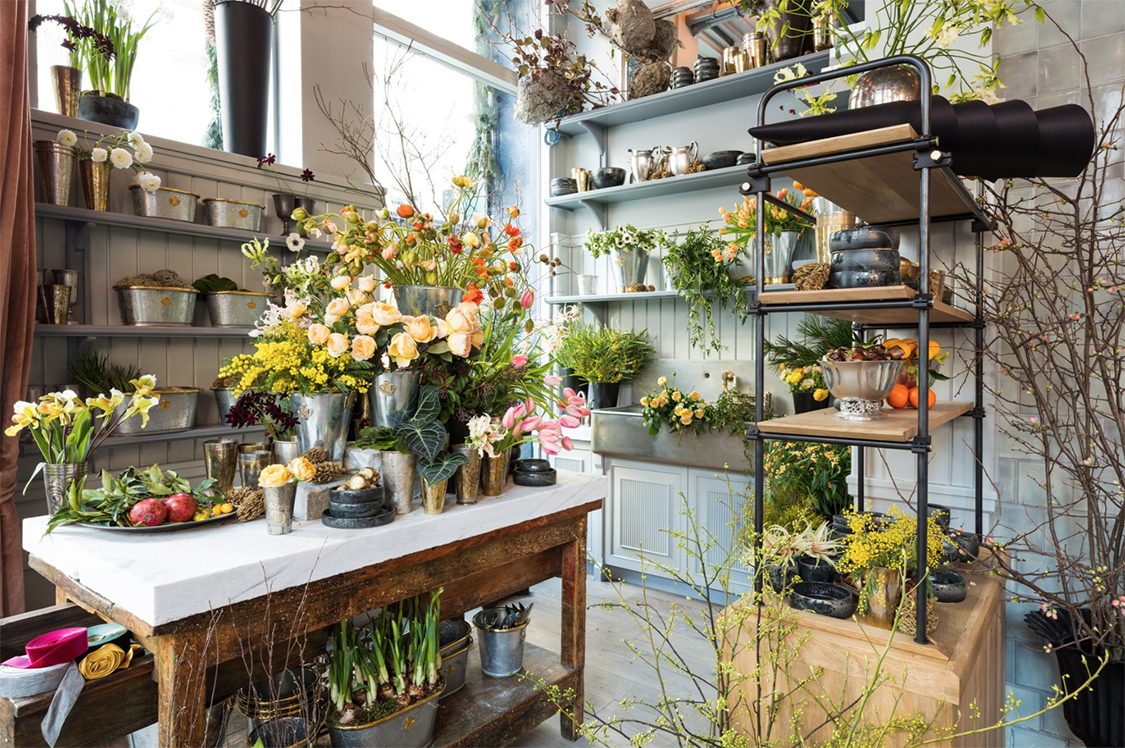 And yet, the Guild is completely modern and totally unlike any bazaar or souk or market. It is rich with worldly sophistication, cool finds, glassware and textiles, modern furniture and antique treasures, so yes, it is a furniture store. But it is also a restaurant, and an oasis with an Emily Thompson’s wild flower shop and a Phaidon creative arts library.

In the furniture showroom, the designers’ own The Founding Collection of furniture forms the basis. It consists of 40 pieces of furniture and 15 pieces of lighting, many originating from their interior design projects. 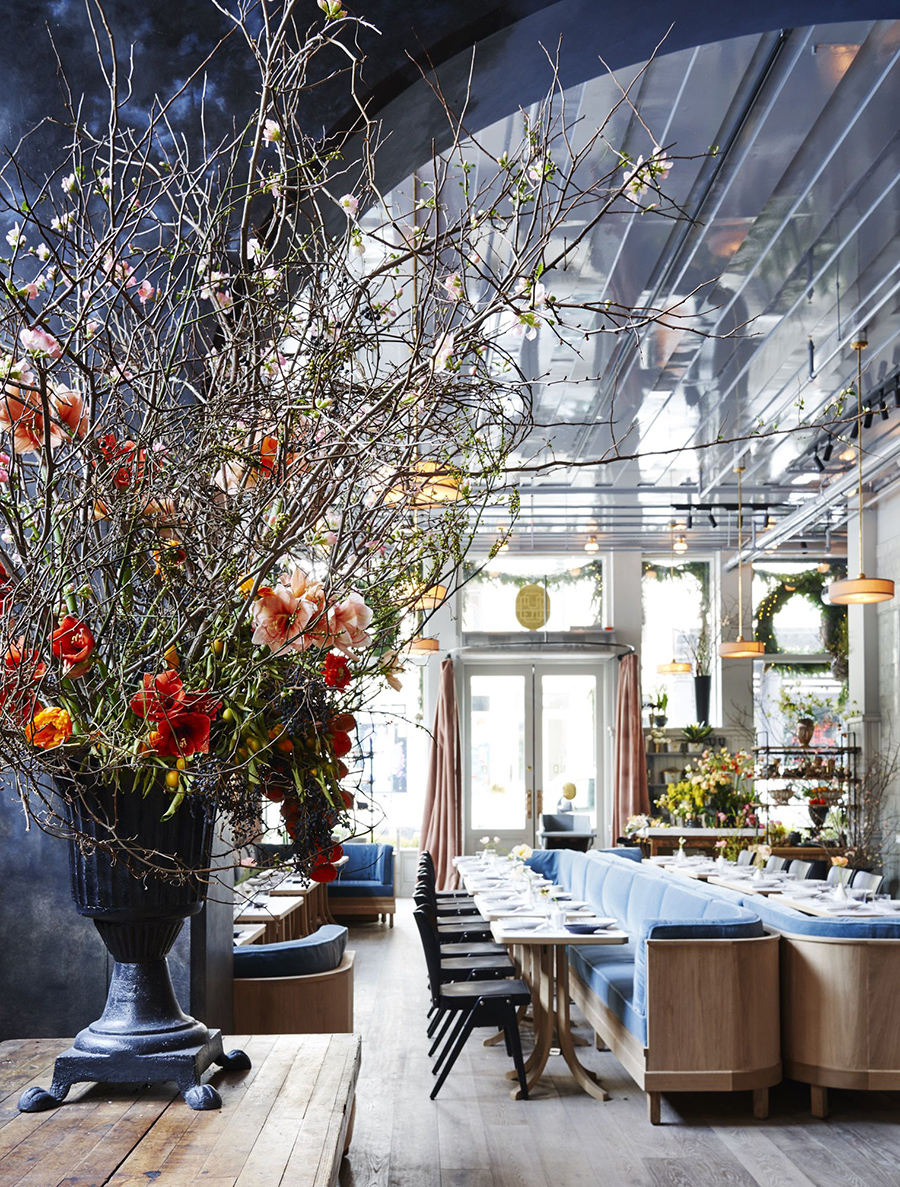 The restaurant is the French café La Mercerie, a partnership between Stephen Starr Restaurant Group and Roman and Williams. Chef Marie-Aude Rose, the former chef at Spring in Paris, will soon serve a full complement of French comfort food for breakfast, lunch and dinner. Only coffee and pastries were available during the first weeks.

The owners of the Roman and Williams Guild, Robin Standefer and Stephen Alesch are founders of the well known interior design firm Roman and Williams Buildings and Interiors in NYC. Their work for Hollywood stars and hospitality brands is eclectic, multidisciplinary, rich, flexible, innovative. 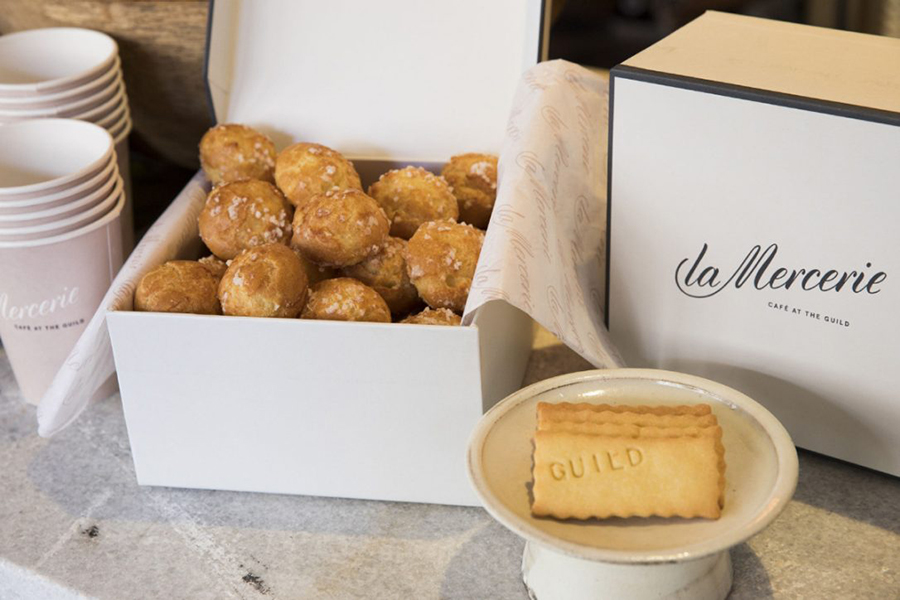 Their interior design is seen at the Standard Highline, The Ace Hotel New Orleans, the Chicago Athletic Association and Lafayette restaurant New York, for example.

We strongly believe that Roman and Williams Guild represents the type of ‘concept’ that has a bright future. It has a real, natural coherence – not a forced, fake grouping of services and products aimed at a target group. 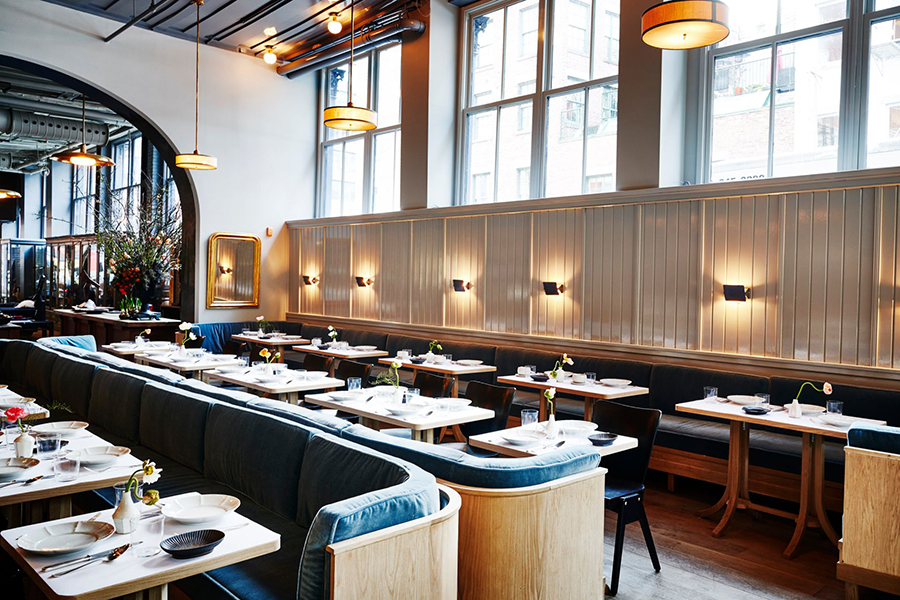 In this case, the natural coherence comes from Standefer and Alesch’s own loves and likes, their passions and creative ideas. What they create feels coherent and welcoming because it has been put together with their inner passion. Customers, guests and visitors sense that passion and feel compelled to participate in it.

In an article about the Guild, Standefer has been quoted as saying that there’s still a lot of creative energy in New York and that retail there is not dead, “it’s just a bit boring.” We agree and welcome Roman and Williams Guild to the new wave of un-dead, unboring retail. Tuija Seipell. 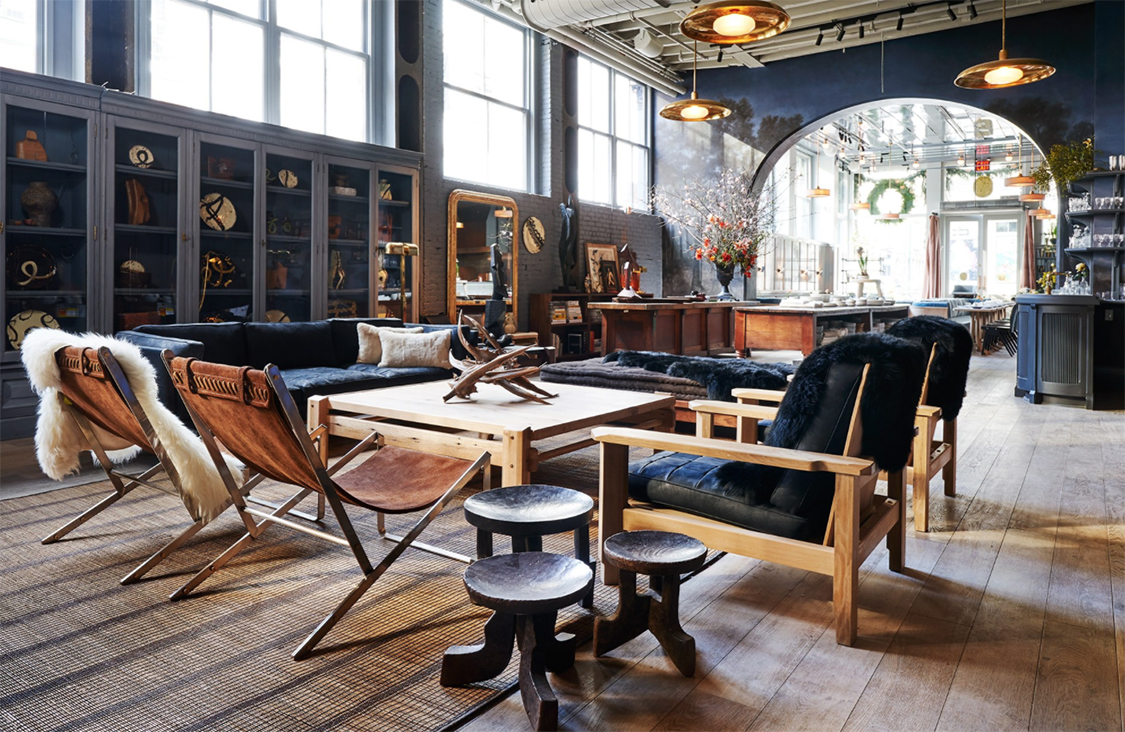