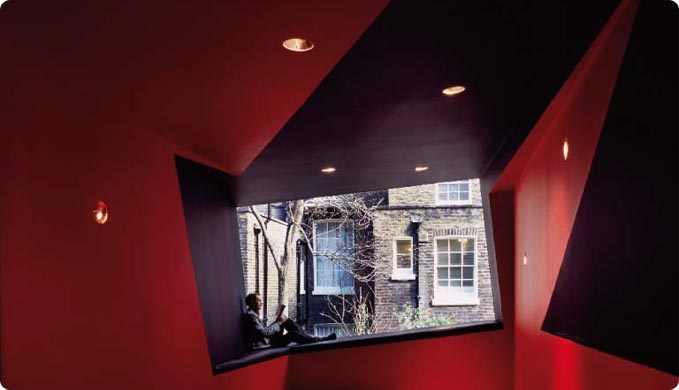 Let’s just all rewind the movie of our lives a bit and go back to school. We at Coolhunter are thinking of heading to University of London’s Birkbeck College and finding our way to the classes at its Film & Visual Media Research Centre.
You cannot tell from the outside that the odd set of buildings at London’s Gordon Square offers anything remarkable at all. The older building does have a pedigree – it is the former home of both Virginia Stephens (later Woolf) and economist John Maynard Keynes. The drab 1970s extension to the building does not even deserve another look. Except inside. 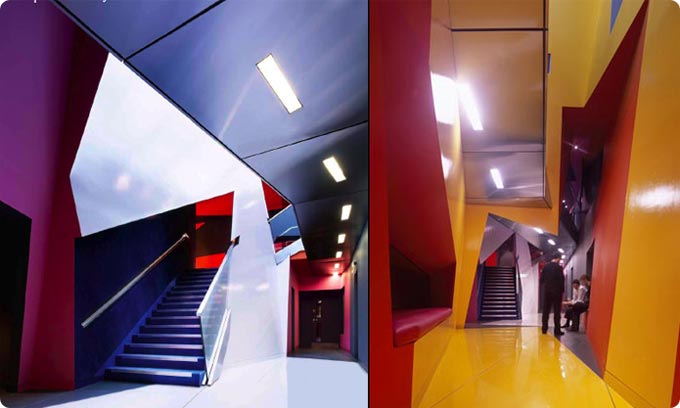 Award-winning London-based Surface Architects won the competition to create within the buildings the permanent home of the Film & Visual Media Research Centre. Surface transformed the basement, ground floor and the extension into a unique state-of-the-art 80-seat cinema auditorium, surrounded by a media study suite, seminar rooms and offices.
Ian Christie, Birkbeck’s Professor of Film and Media History, describes the exciting new building ‘…the new cinema auditorium – already being referred to as ‘The Screen on the Square’ is as soberly dedicated to ideal screening conditions as the surrounding break-out spaces and stairway are an exuberant display of pure form and colour. In fact, Surface’s extraordinary projection of intersecting cones has various filmic associations: the jagged angles recall the Expressionist set design of The Cabinet of Dr Caligari, an influential German film of 1921; and the lurid colours evoke Andy Warhol’s silkscreen portraits of film stars.’ 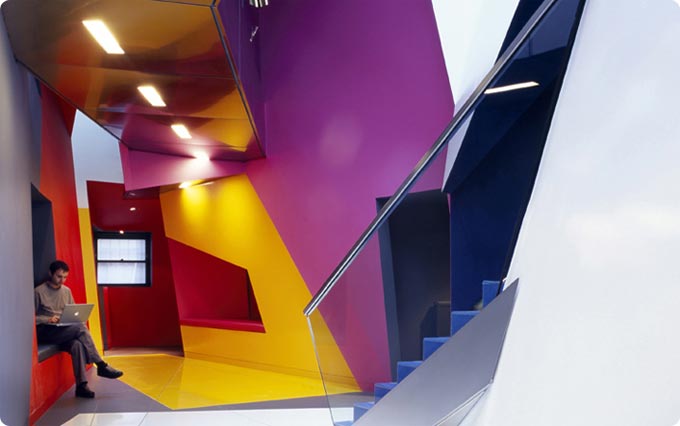 Key players at Surface are Richard Scott, who formed it in 1996, and Andy MacFee, who joined Surface in 2001 as director. Both have worked with Will Alsop and other notables. Surface is also one of 47 practices worldwide selected to work on the Athlete’s Village for the London 2012 Olympics. By Tuija Seipell