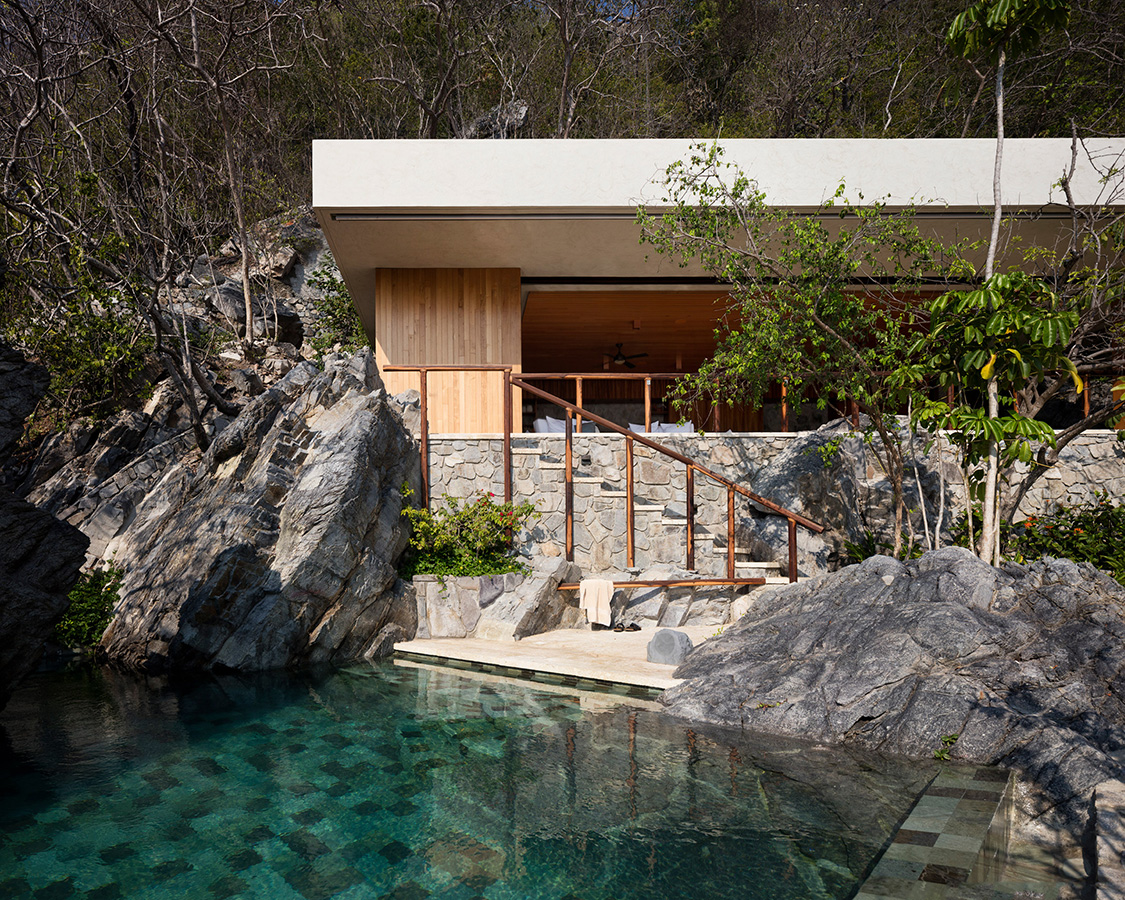 In the case of a holiday residence project named SAJ III in Mexico, many things went right, both by plan and serendipitously, and incredible beauty resulted.

In SAJ III, the time-tested cooperation between a young family with four kids and an architectural firm that took the time to really read the landscape has resulted in not just a lovely house built a few years ago, but also a spectacular pool and cabana, completed some 20 months ago.

We are in love with the incredibly beautiful, dramatic pool, set deep in the rock and perfect for the location. 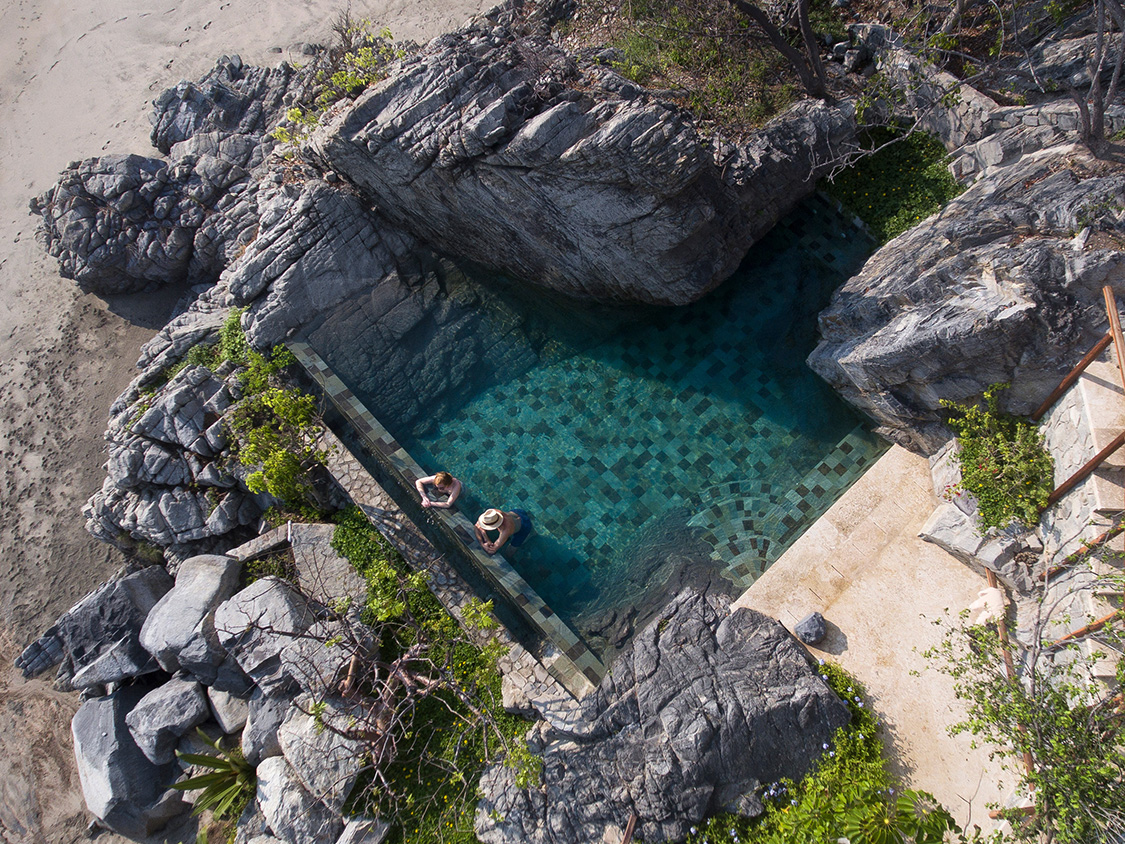 The house itself and its cabana and pool are situated on a rocky outcropping overlooking the Pacific Ocean on the west coast of Mexico in the town of San Juan de Alima.

Guadalajara, Mexico-based CDM worked with the family some years ago designing their beach house – a holiday retreat for family and friends. 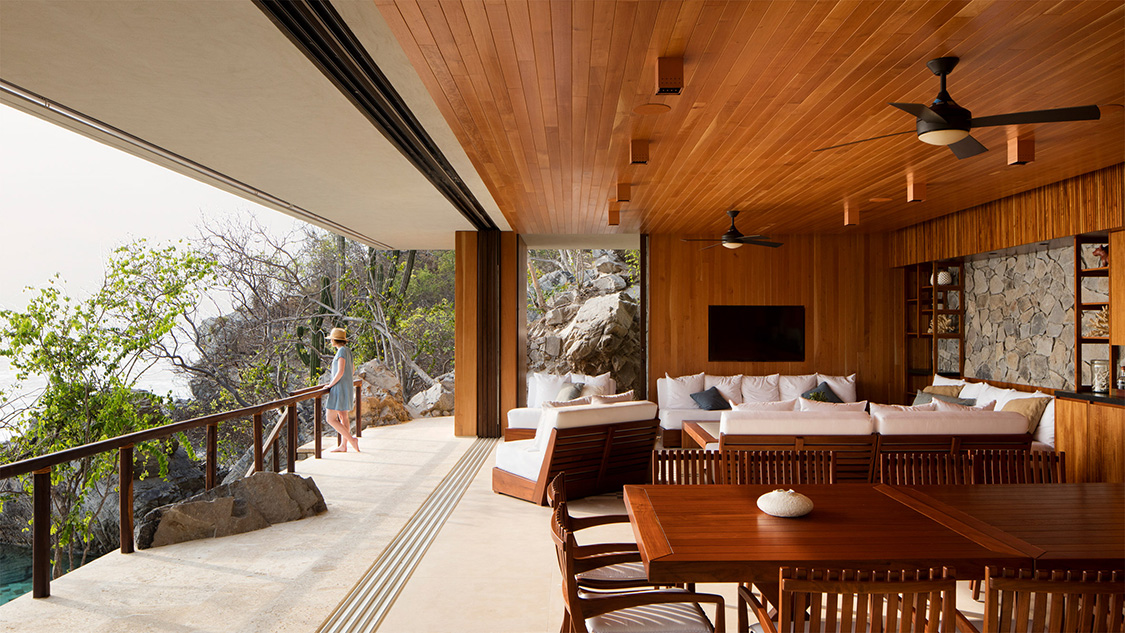 More recently, the clients had the opportunity to buy the lot adjacent to the beach house and they again commissioned CDM to design the terrace and pool.

Javier Dueñas, partner and creative Director of CDM tells The Cool Hunter that the new cabana is 137 square metres (1,474 sq. ft)  in size and consists of a single grand room. 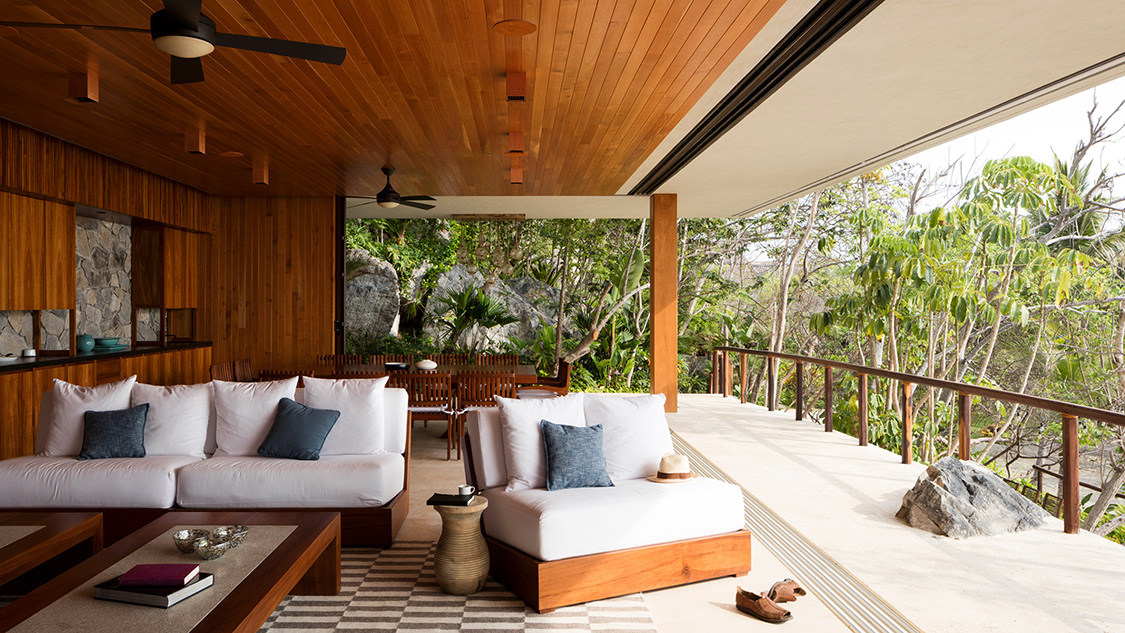 Within the open plan are a living space with a sitting area, a dining area and a powder room, with several terrace areas plus a viewpoint on the roof.

A kitchenette is integrated with a full-length piece of furniture that includes cabinetry and some display shelves.

In the millwork the designers used two different timbers. For the furniture, they used tzalam (also known as wild tamarind) which is a local wood. On walls and ceiling, red cedar was used. Both are dark in tone and the cedar adds a distinct scent as well. 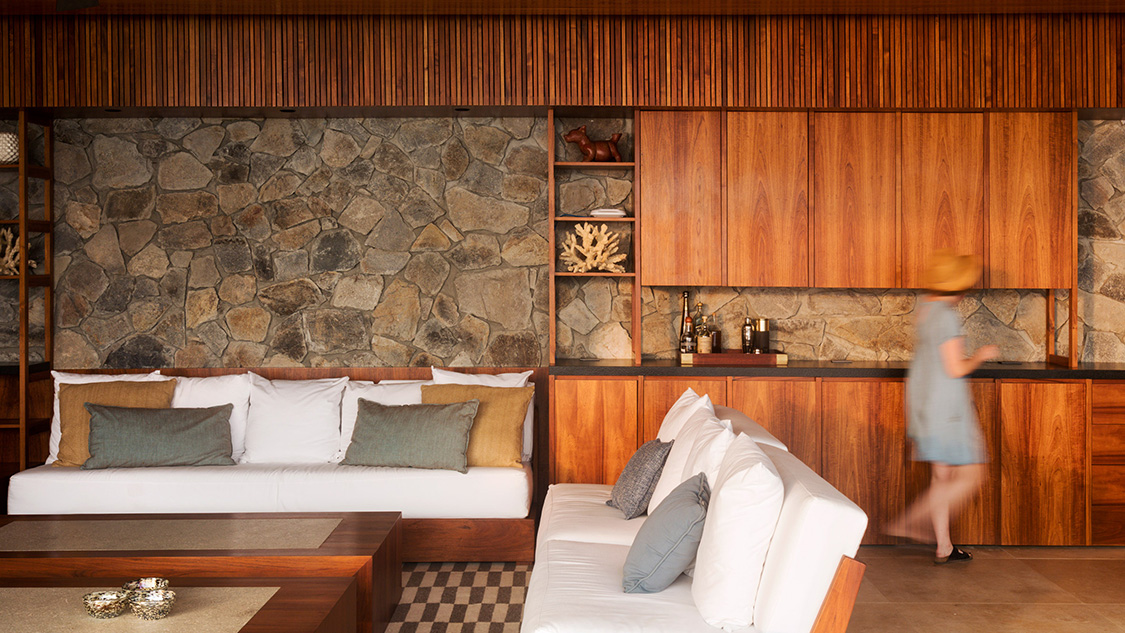 Everywhere where stone flooring is used it is made of a non-mineral coral stone that does not get hot in the sun, letting the residents walk everywhere barefoot all day.

“This project was basically designed on site due to the challenges that the site had including the slope, the rocks and the endemic trees,” Dueñas tells us.

“It was designed entirely by hand on site and then brought to our office for the production of the construction plans. It was constant back-and-forth communication and collaboration with the builders, Jorge Chavez and Juan Pablo Chavez.” 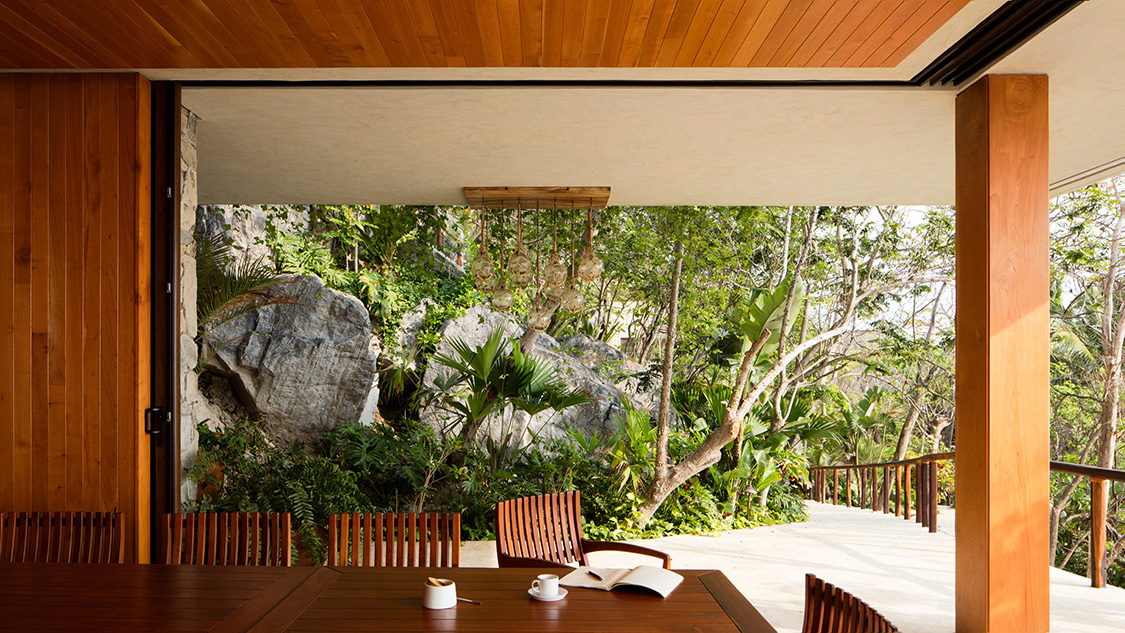 When the architects and builders decided on the location of the spectacular pool, they did not know if the rock basin was able to hold the water. “We decided to take the chance and it worked” says Dueñas.

Not only did it work, but the pool is truly the focal point and the finest feature of the project. It was designed to appear as if it were a natural tide pool filling and emptying as the tides ebb and flow, which is why it seems so right for the location. 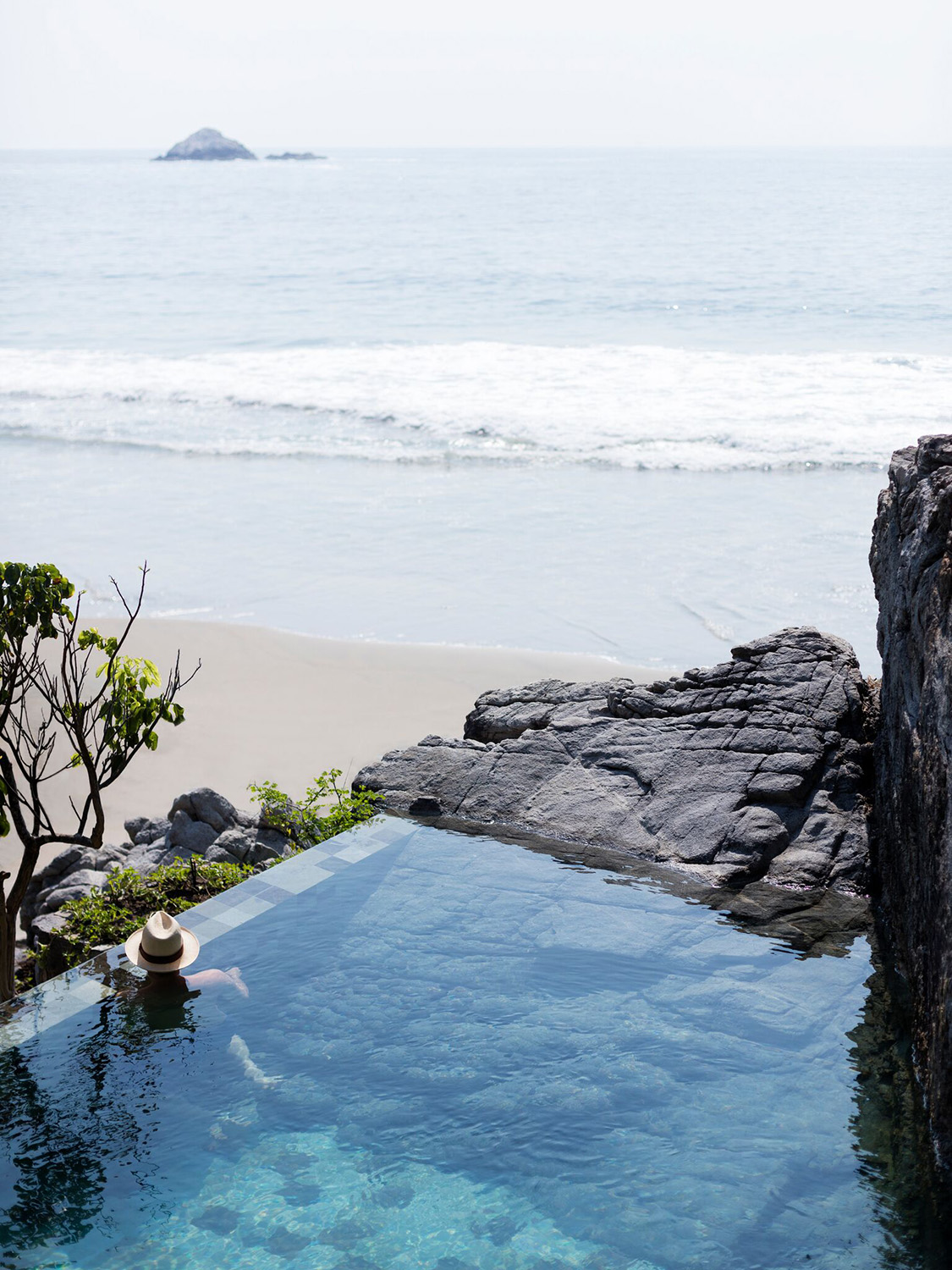 Another site challenge was that the clients wanted the entire site to be easily walkable with no steep steps. The architects mapped out the footsteps of local wildlife to trace the easiest paths so that people can move from the beach to the pool and the terrace along just a gentle slope. “This also makes it easier for the service staff to serve food and drinks to the different areas on the site,” says Dueñas. 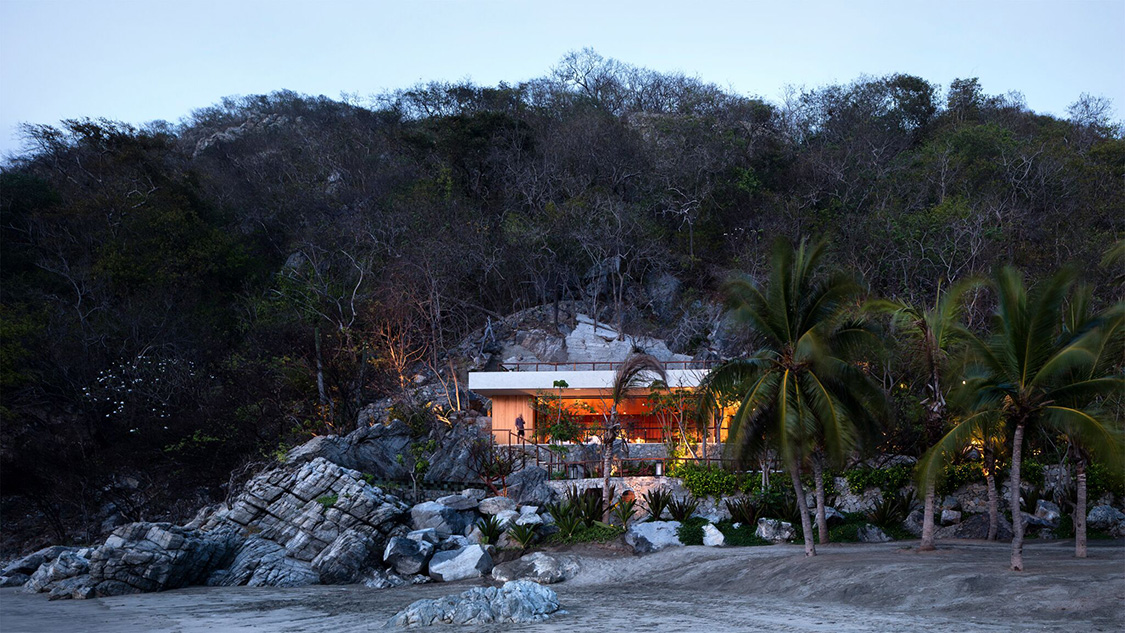 He also says that there was an “extra gift” they were able to realize beyond the project brief. Above the terrace they managed to create a flat viewing platform that is perfect for stargazing on the inky nights over the Pacific. Tuija Seipell. 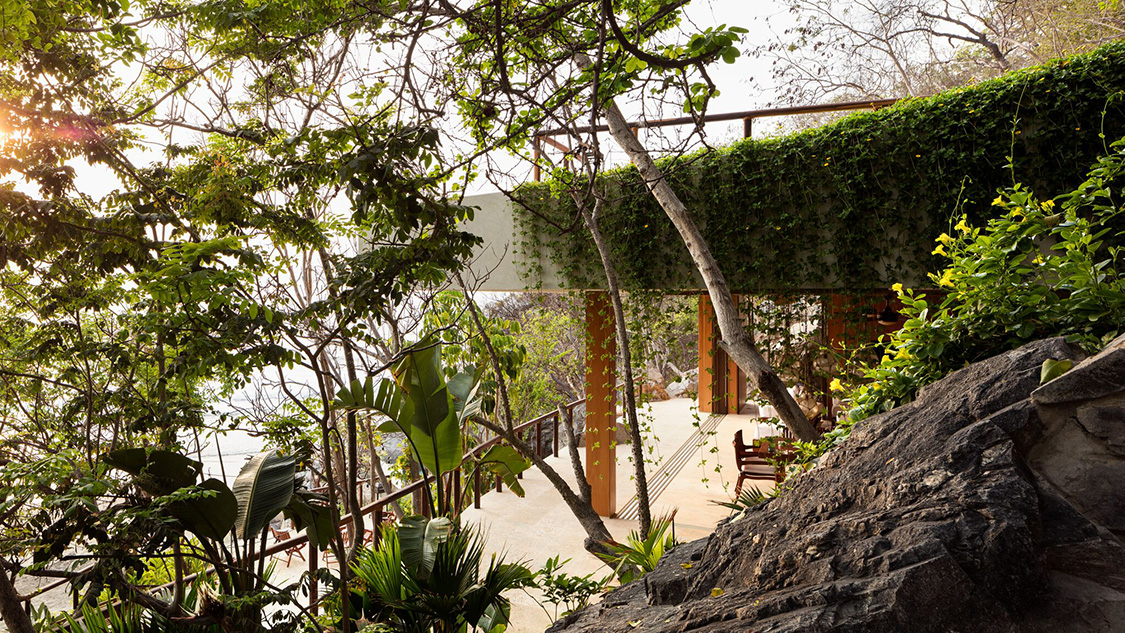