Athens, unlike some of the other capitals of Europe, is not a city we would describe as glamorous at first glance. It’s been described as ugly and congested, a stopover for the approximately 33 million visitors to Greece this year alone, while on their way to the ever so chic greek islands. Aside from the obligatory tour of the Acropolis, many travellers don’t pause long enough in this ancient city to really discover what some are calling the continent’s most vibrant cultural metropolis. So this year, we decided to explore Athens for ourselves. What we discovered is an exciting city bursting with life, cool bars, elegant restaurants, great hotels and, of course, countless espressos and frappe. Our conclusion is that Athens is a city that deserves several days of a seasoned traveler’s time. 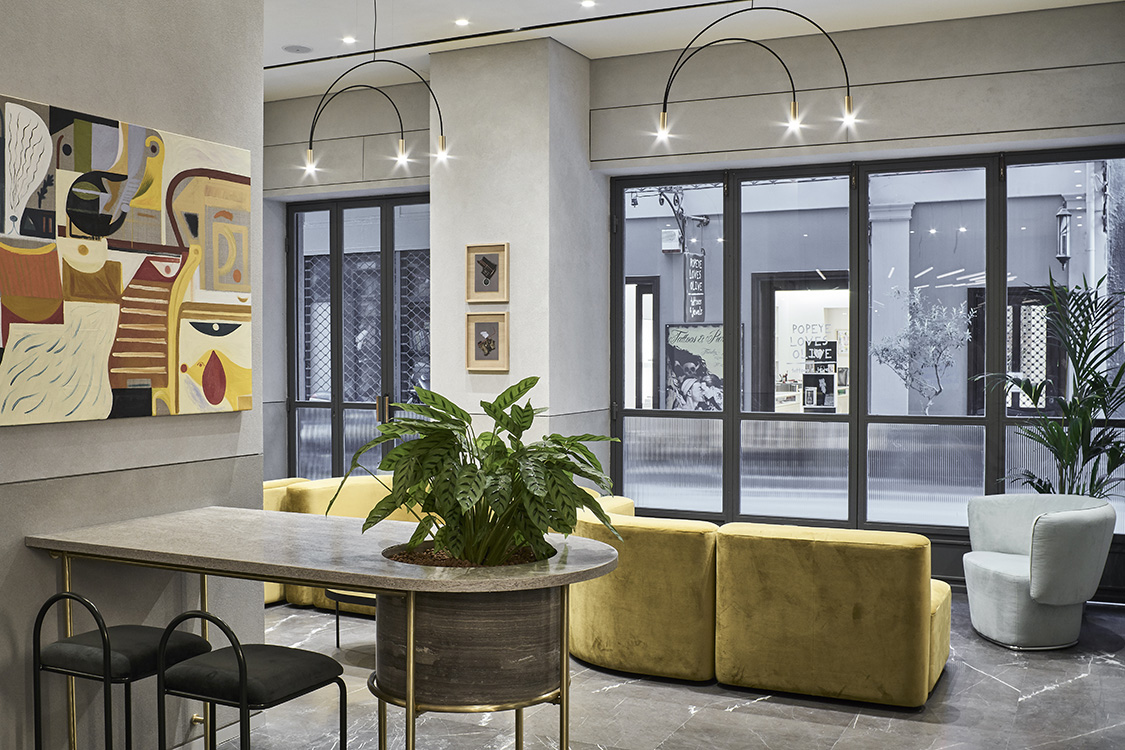 One of the highlights of – and initial reasons for – our Athens stay was an invitation from the family that owns and operates the newly opened, neo-modernist boutique Perianth Hotel that is part of the Design Hotels collection. 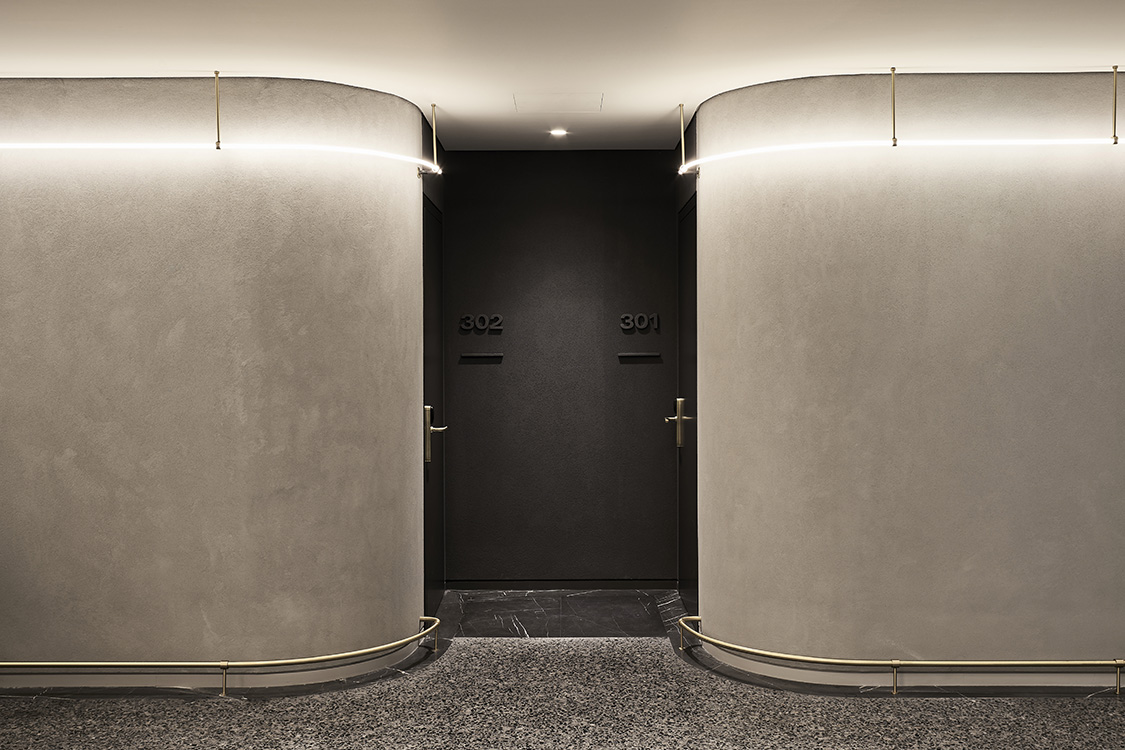 Perianth is located by the Byzantine-era Agia Eirini square in a neighbourhood resembling New York’s Soho. The hotel is perfectly positioned just far away enough from the crowded tourist traps, yet within convenient distance form some of the city’s main sites such as the Acropolis and the National Archeological Museum. The neighbourhood is bustling with fashionable people hanging out at cool cafes sipping their freddo cappuccinos and enjoying themselves at one of the area’s many great eateries, cafe’s, bars and nightlife hotspots.

We sampled and liked, for example the Third Place, the local favourite Kosta’s Souvlaki, great bars like “6 dogs” and the incredible ice-cream bar Kokkion. 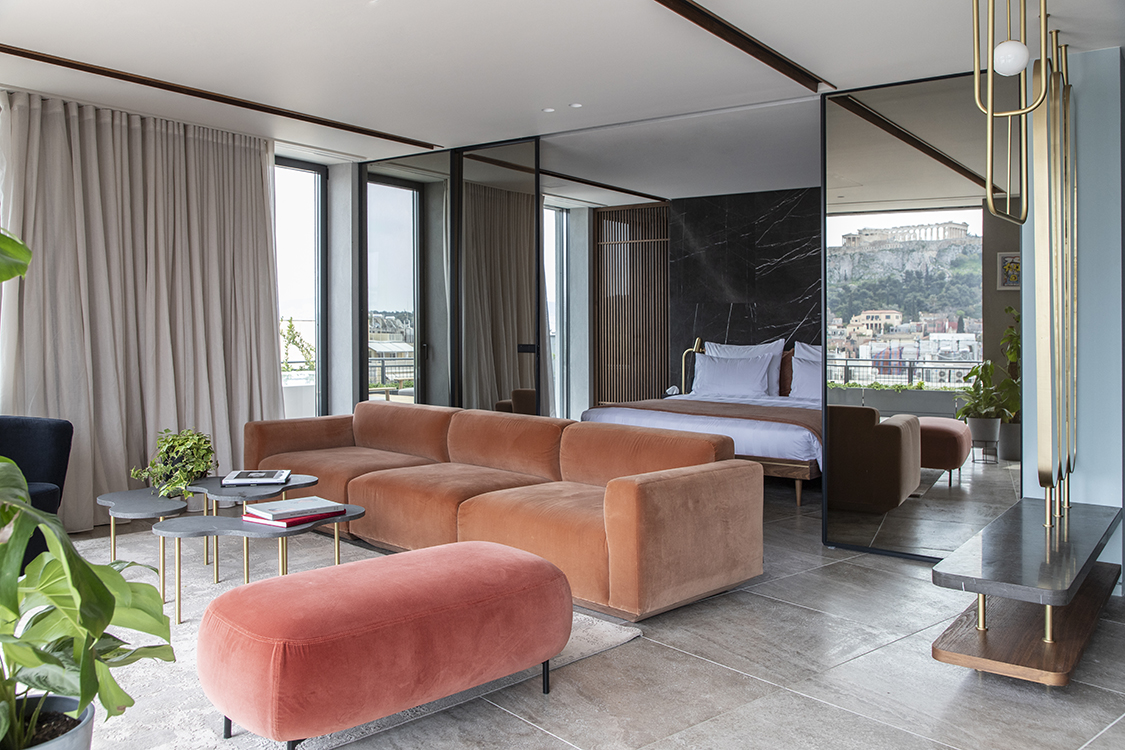 In fact, our biggest problem during our four-night stay at the Perianth Hotel was deciding if we should just stay at our Perianth Penthouse Suite all day and night, or go out. It was not an easy choice as our expansive 116-square-metre Perianth Penthouse Suite on the top floor of the five-story hotel had 360-degree views of the Acropolis and the Lycabetus hill, two bedrooms, a living room, dining area, bar, and a rooftop terrace with a pool and Jacuzzi. 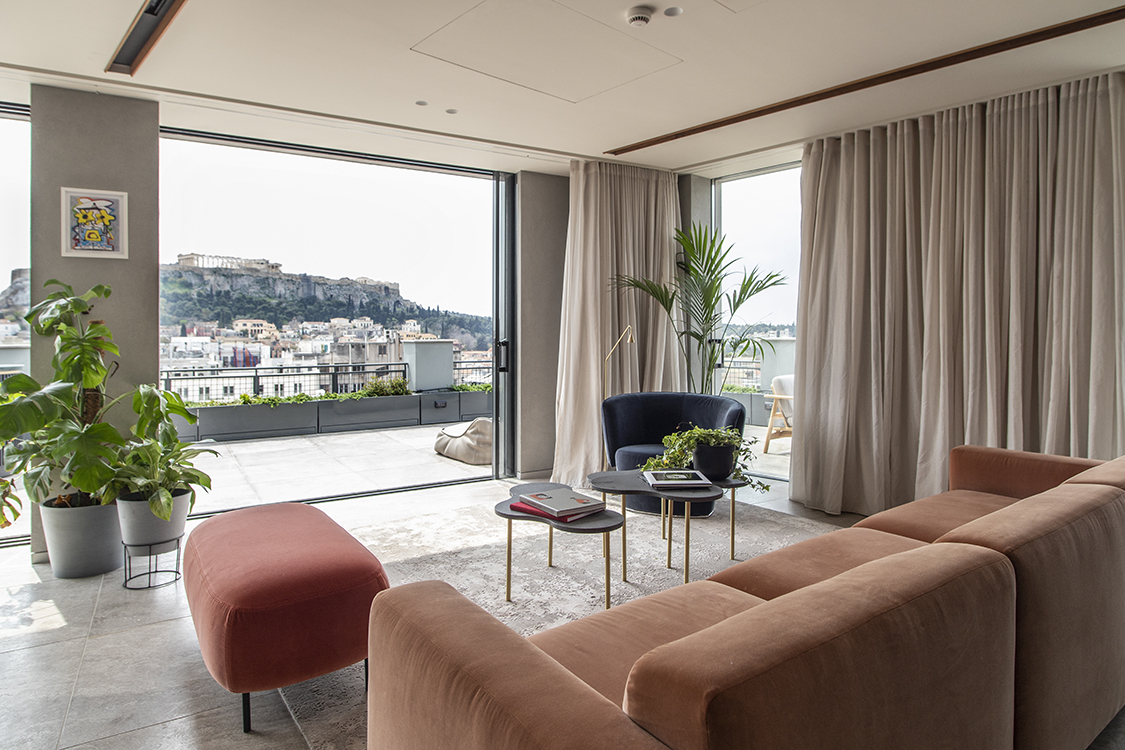 We have enjoyed great views from many hotel rooms all over the globe, but this was just magical. The view from the Suite was indescribably mesmerizing, the absolute star of our entire experience in Athens. The Penthouse is orientated perfectly to maximize the view of the Acropolis. The floor-to-ceiling glass doors open up to a vast terrace with its bar, pool and Jacuzzi. Even in the main bedroom, you fall asleep and wake up to the spectacular views. We spent hours watching the sunset changing the light over the monument from golden hues to delicate pinks. 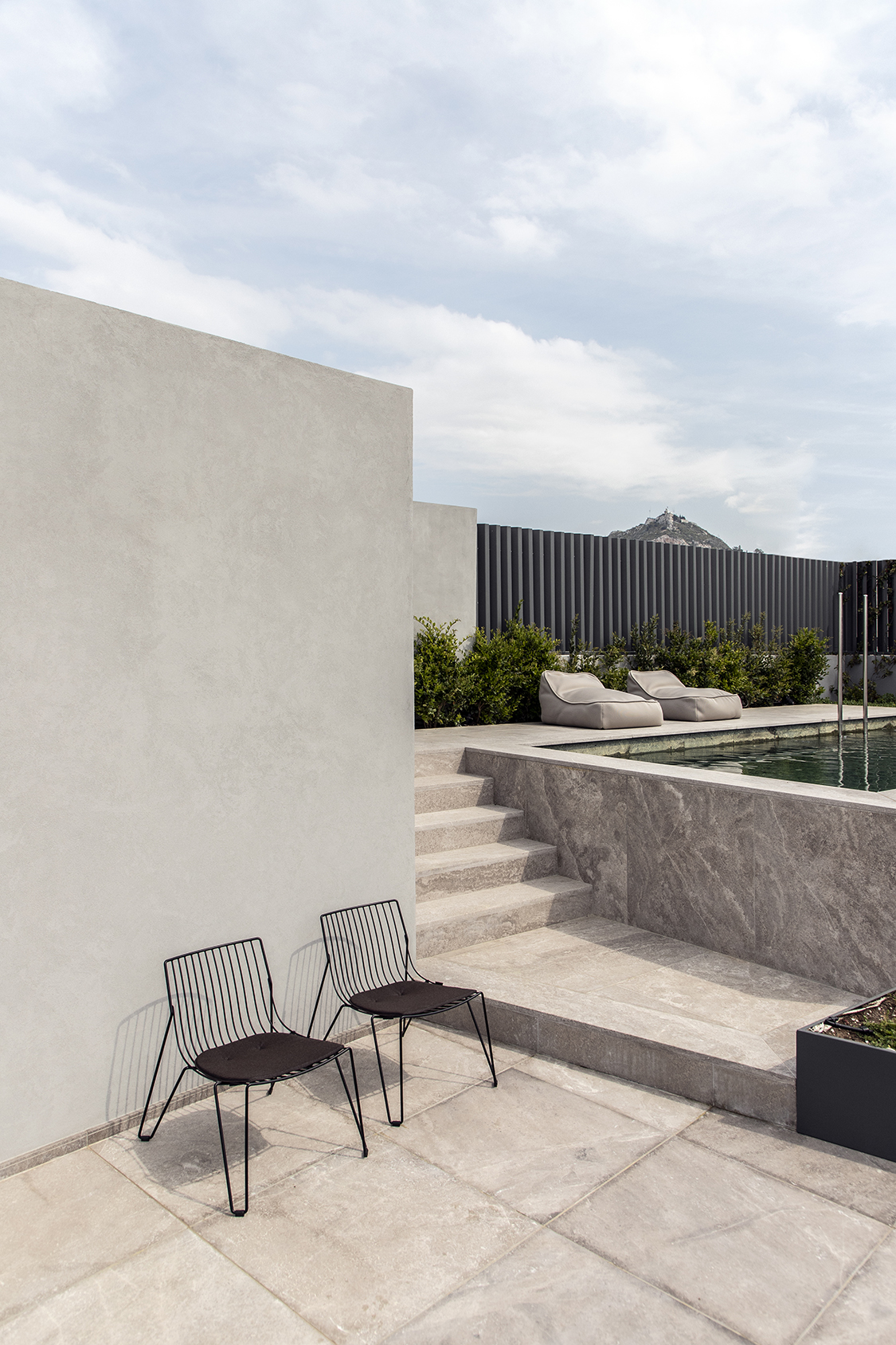 The 1930’s five-story hotel has only 38 rooms which is one of the features that make this such a gem. No crowds, always personal service and no noise. Perianth was designed by Greece’s hottest design firm K-Studio that seems to have designed everything that is cool in Greece right now from Vora in Santorini and Casa Cook in Crete to the new Mykonos airport. 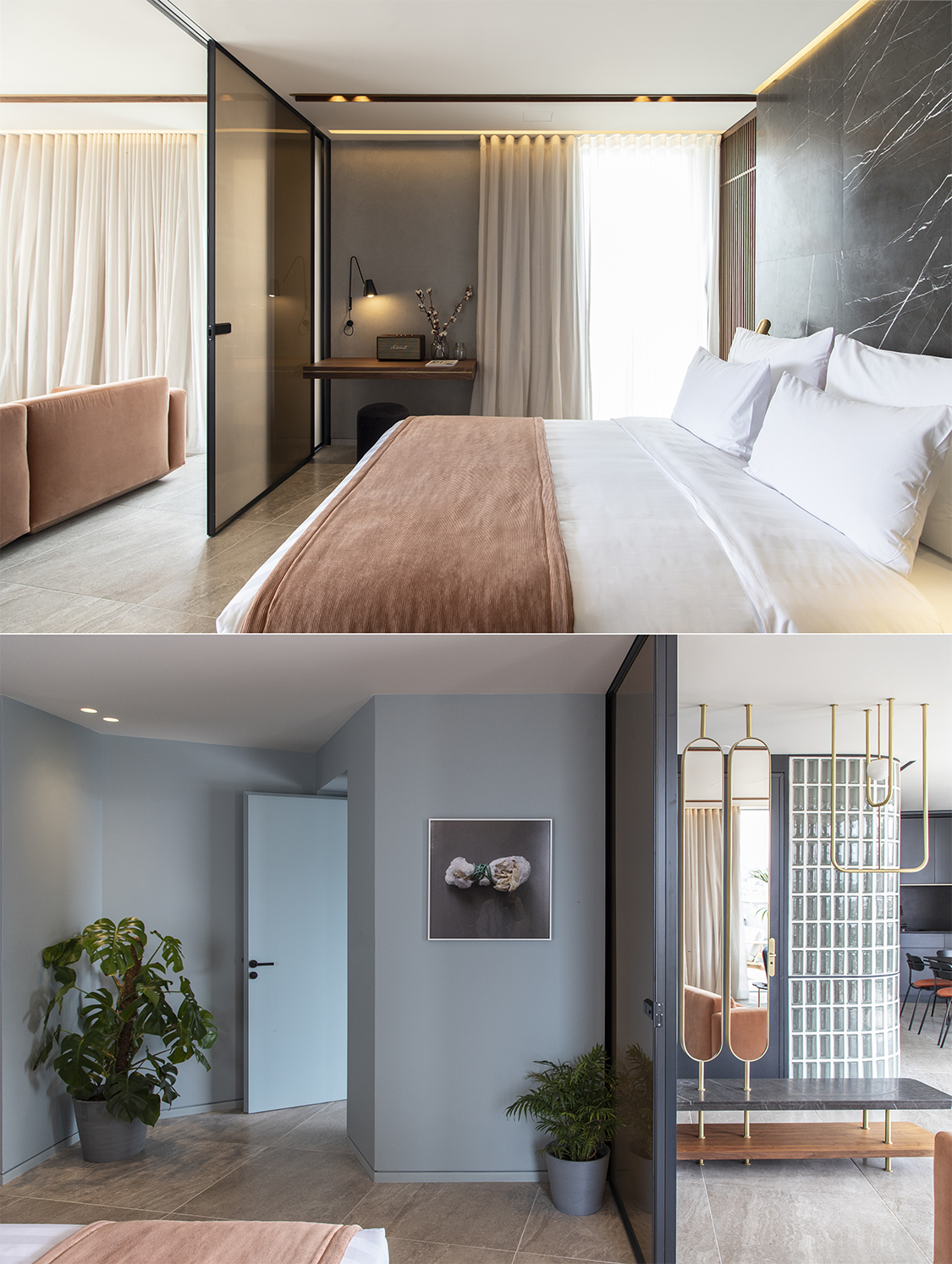 But, as always, the true test and the real heart of a hotel is its service. We loved the attention to detail and the team’s eagerness to serve. Perianth’s owners had had the building for several years but they were not sure what to do with it. Siblings Alexandra, Anastasia and Konstantinos Sgoumpopolous finally settled on opening a hotel. Konstantinos is a Zen monk and his Zen Center also operates in the same building. Anastasia brings the love of art and fashion to the table and Alexandra is the born hostess. 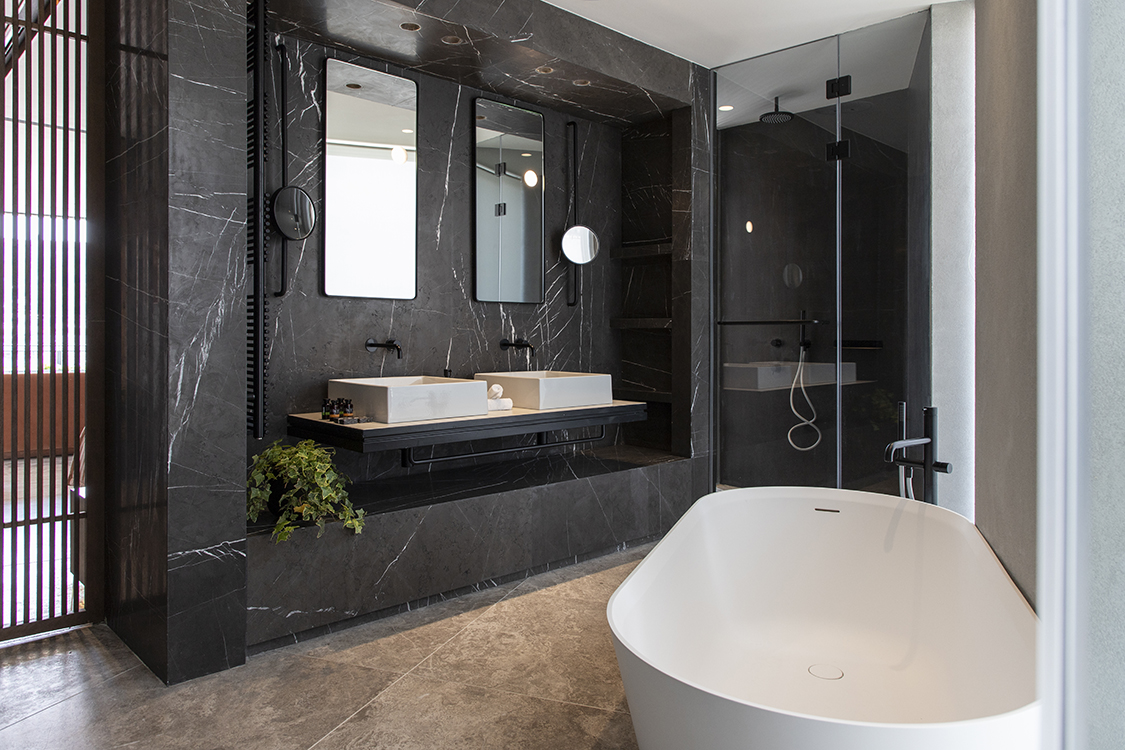 We were impressed by the entire staff as everyone spoke perfect English, seemed genuinely excited to work there, were super helpful with booking restaurants and recommend the cool things to see and do in Athens. On their advice we dined at Nolan where chef Sotiris Kontizas, drawing on his Japanese and Greek heritage, has fused together the two distinct and disparate culinary traditions of east and west into one of Athens’ most extraordinary and unique culinary experiences. 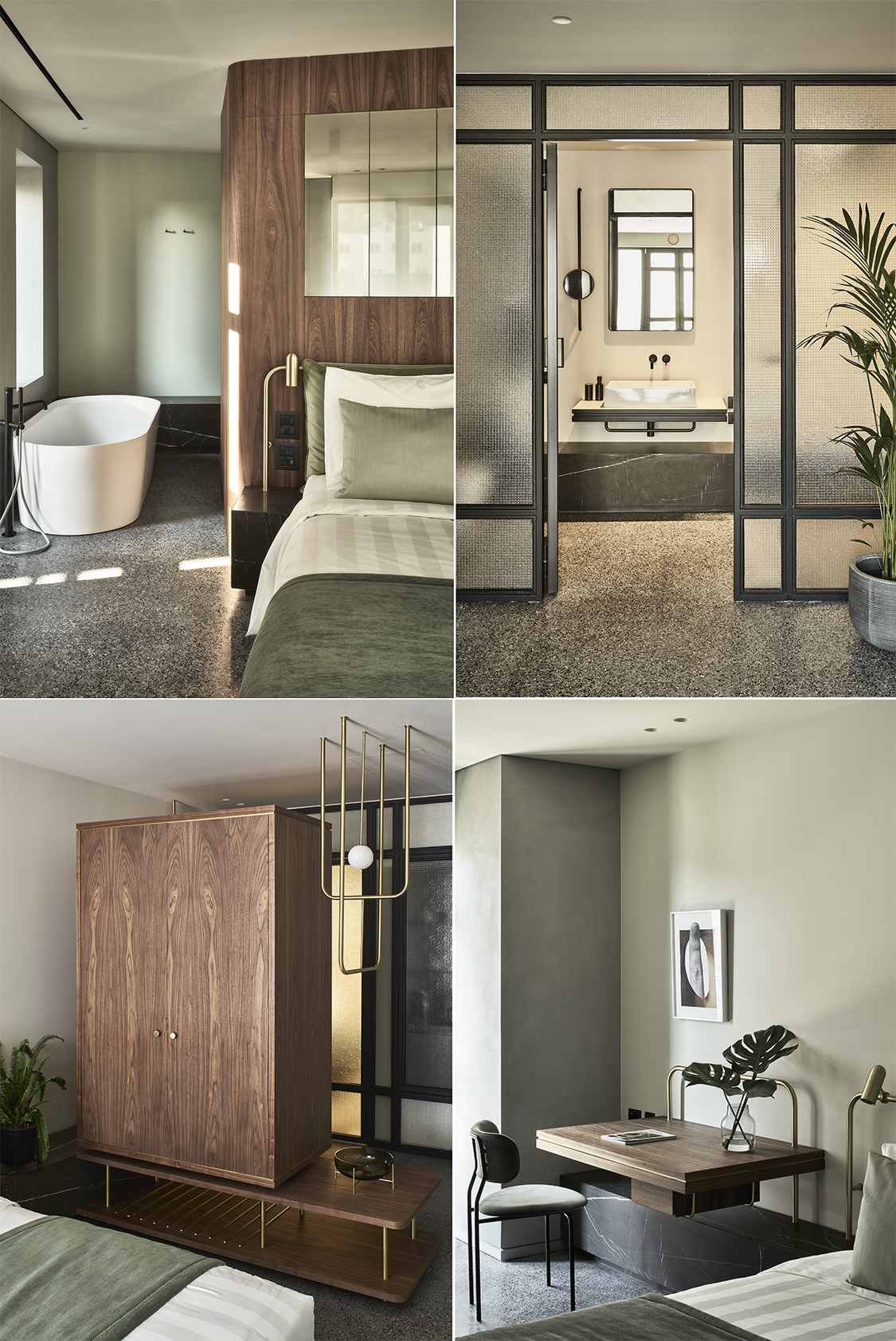 Another restaurant we recommend is Island Club, about 45-minute taxi ride from the centre of Athens. The restaurant transforms into a dance and bar venue at night but it is truly chilled.  Don’t be surprised if you bump into Greek celebrities such as Anna Vissi, who is apparently a regular. You easily lose track of time at Island Club, and the next thing you know it is just before sunrise and you are not yet back at your hotel. For Perianth Hotel, we envision a bright future. In spite of their lack of previous hotel experience the owners of Perianth Hotel have created a new standard in luxury on the Athenian accommodation scene. The family has created an elegant sanctuary away from the surrounding busy street life and at the same time, the hotel has become a destination in its own right adding to the fabric and the cool vibe of the area.

We feel they are onto a good thing with this venture and we have already humbly suggested they expand their boutique hotel concept to the Greek Islands. Let’s hope there will be a ‘Perianth Villas’ opening in the not so distant future… 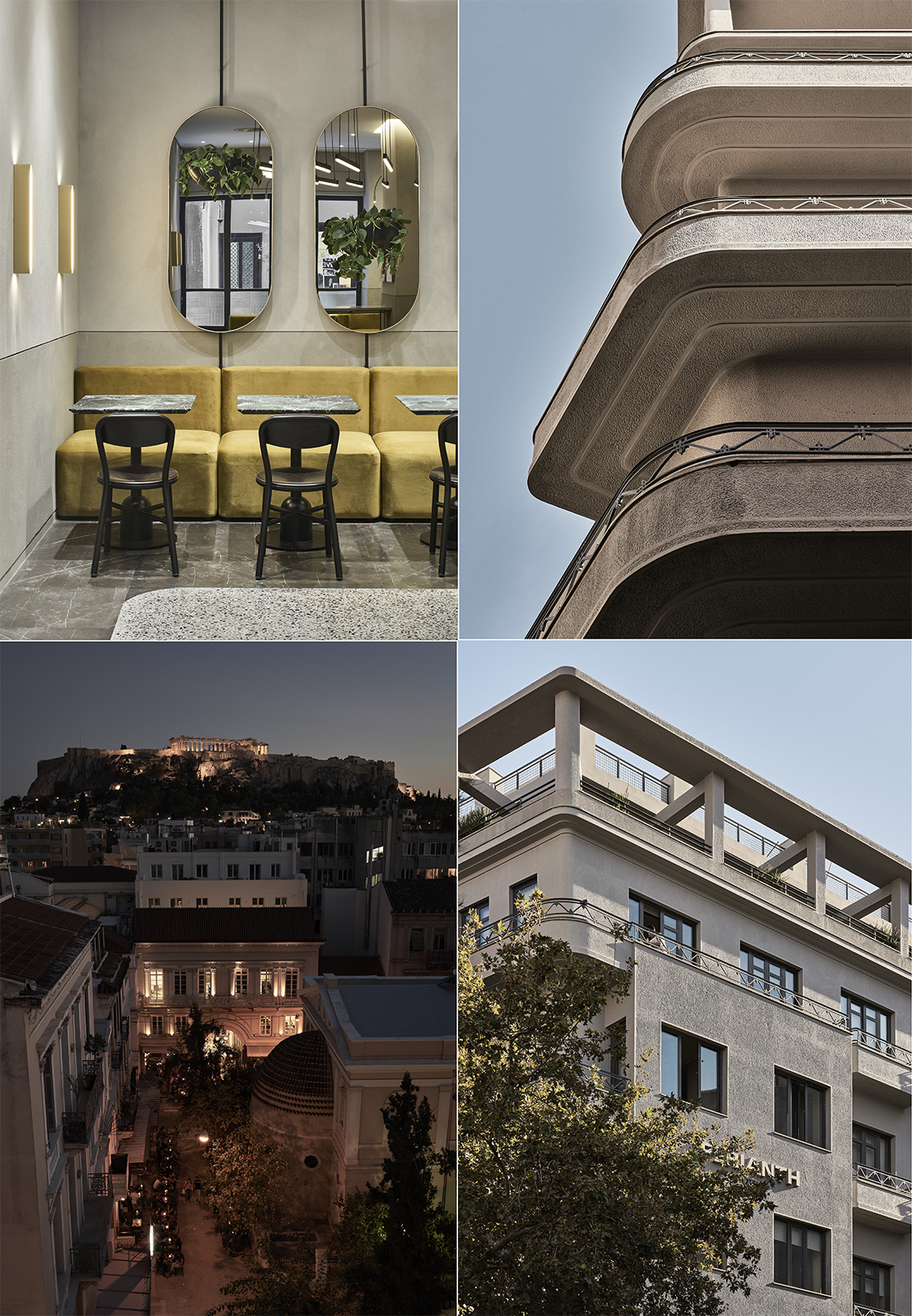