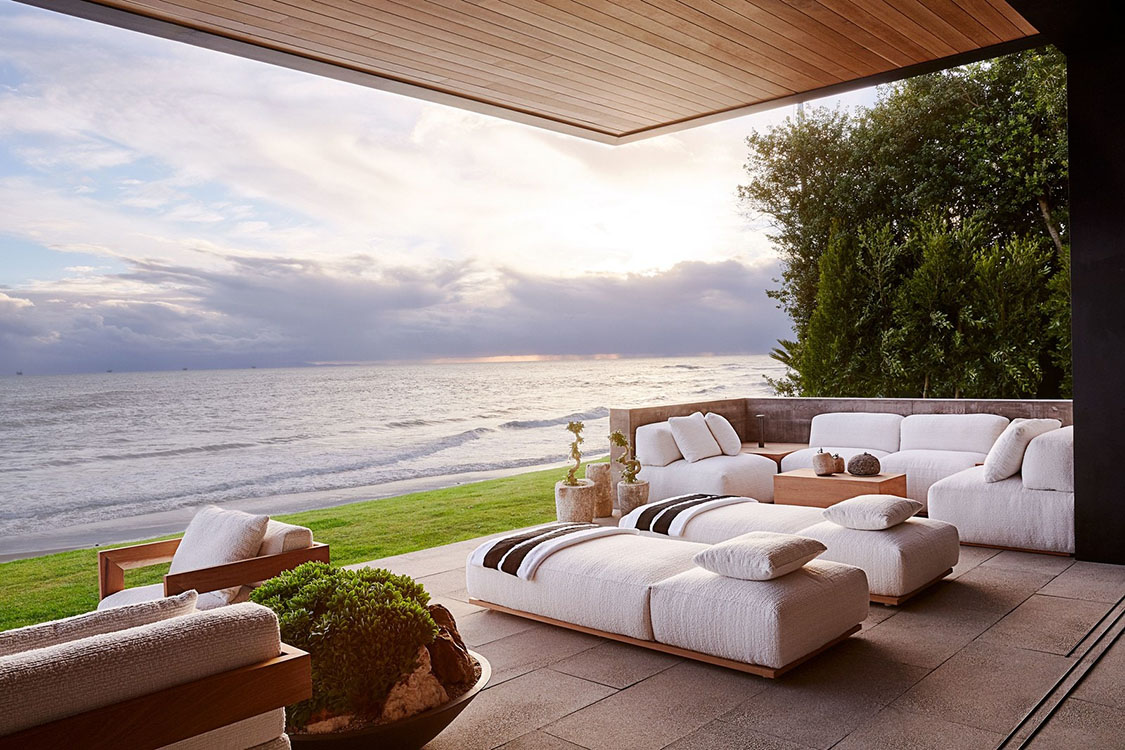 Barry and Sheryl Schwartz’s retreat by the Pacific Ocean in Santa Barbara would be stunning even if it were completely unfurnished. The spectacular openness of the structure and the tangible presence of the ocean would suffice.

But the luxurious touches added by Barry, the 77-year-old renowned luminary of thoroughbred racing and co-founder of Calvin Klein (in 1968), and Sheryl, his wife of more than 50 years, take this tranquil getaway to the level of magnificence. 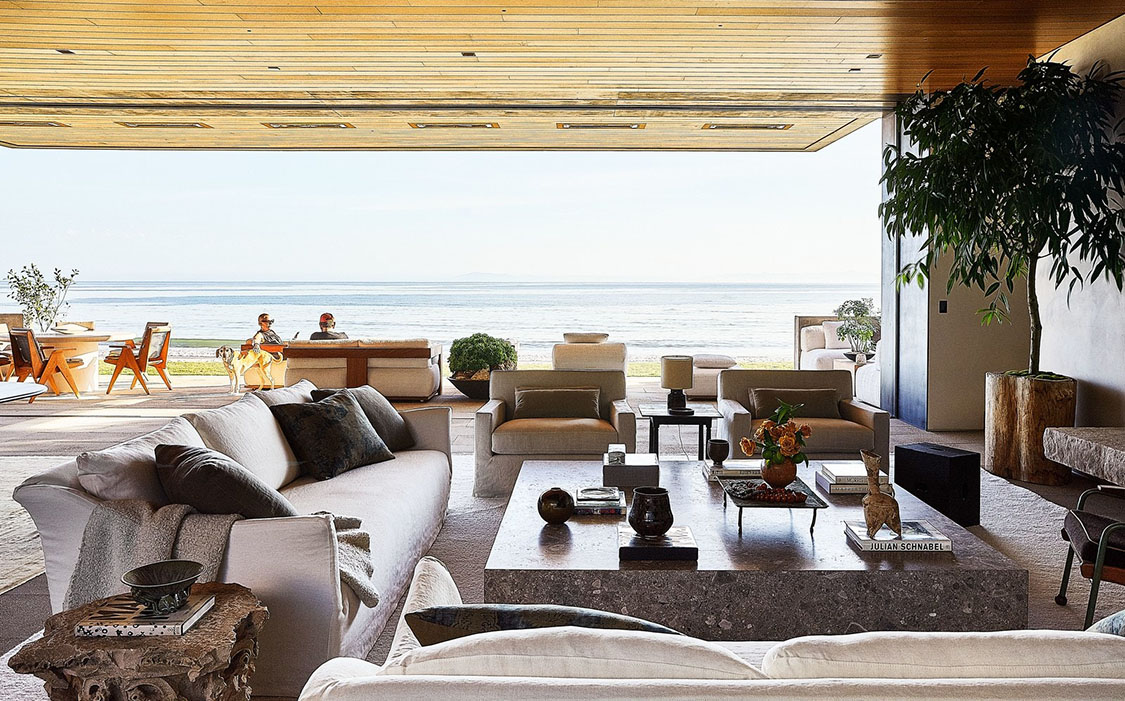 All we can do is sigh and imagine how our lungs will fill up with the fresh Pacific Ocean air, and how our senses heighten with the ever-changing views, the scent of salt and wood, and the calling of seagulls.

Loving all of this, the Schwartzes had rented a house at the beach for about a decade but when the neighbouring plot became available, they decided to create their own version of a surfside haven. 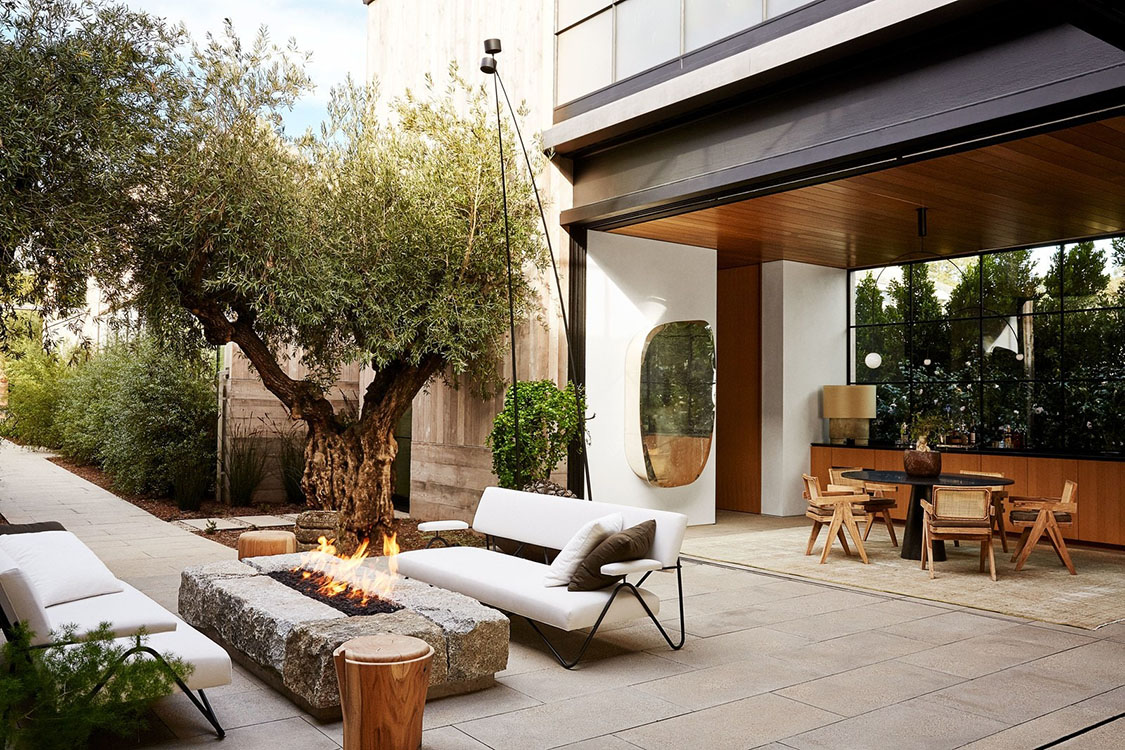 In charge of interior design were mother and son interior designers, Kathleen and Tommy Clements of Clements Design whose client list includes Ellen DeGeneres, Jennifer Aniston and other Hollywood celebrities.

Landscape architect Mark Rios of RCH Studios handled the landscaping of the courtyard and gardens.

The exterior and gardens are understated and inconspicuous. The landscapers brought in fully grown ficus and olive trees and selected only plants that belong in the local landscape. 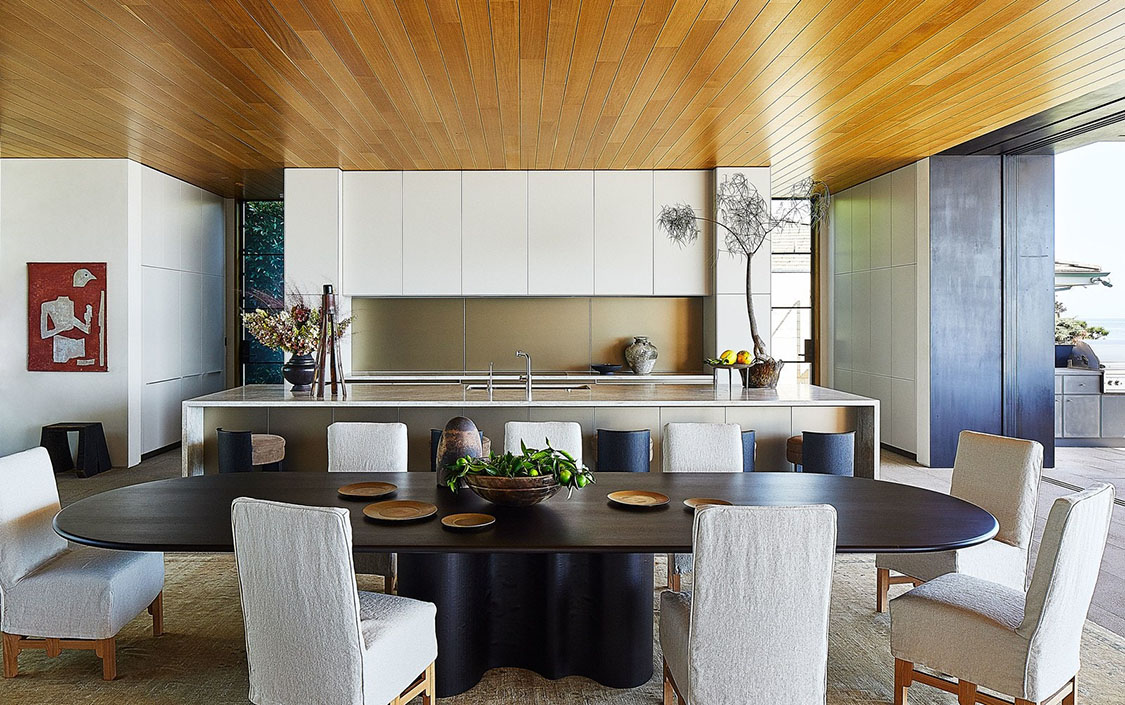 The architects used unassuming materials such as reclaimed teak on the walls and titanium on the roof. Everything aims to help the structure seem a long-time part of the spectacular site and its landscape.

The conspicuous drama intensifies at the enigmatic entry gate designed by France-based French-Swedish sculptor and furniture designer Ingrid Donat. This was her first commission of this kind but it echoes her previous dramatic wood and bronze creations inspired by African tribal art, Art Deco, Art Nuveau, Gustav Klimt and Gustave Eiffel. The grand gate, clad in bronze panels was the Schwartzes’ 50th wedding anniversary gift to themselves. The handle is subtly inscribed with “50 years.” 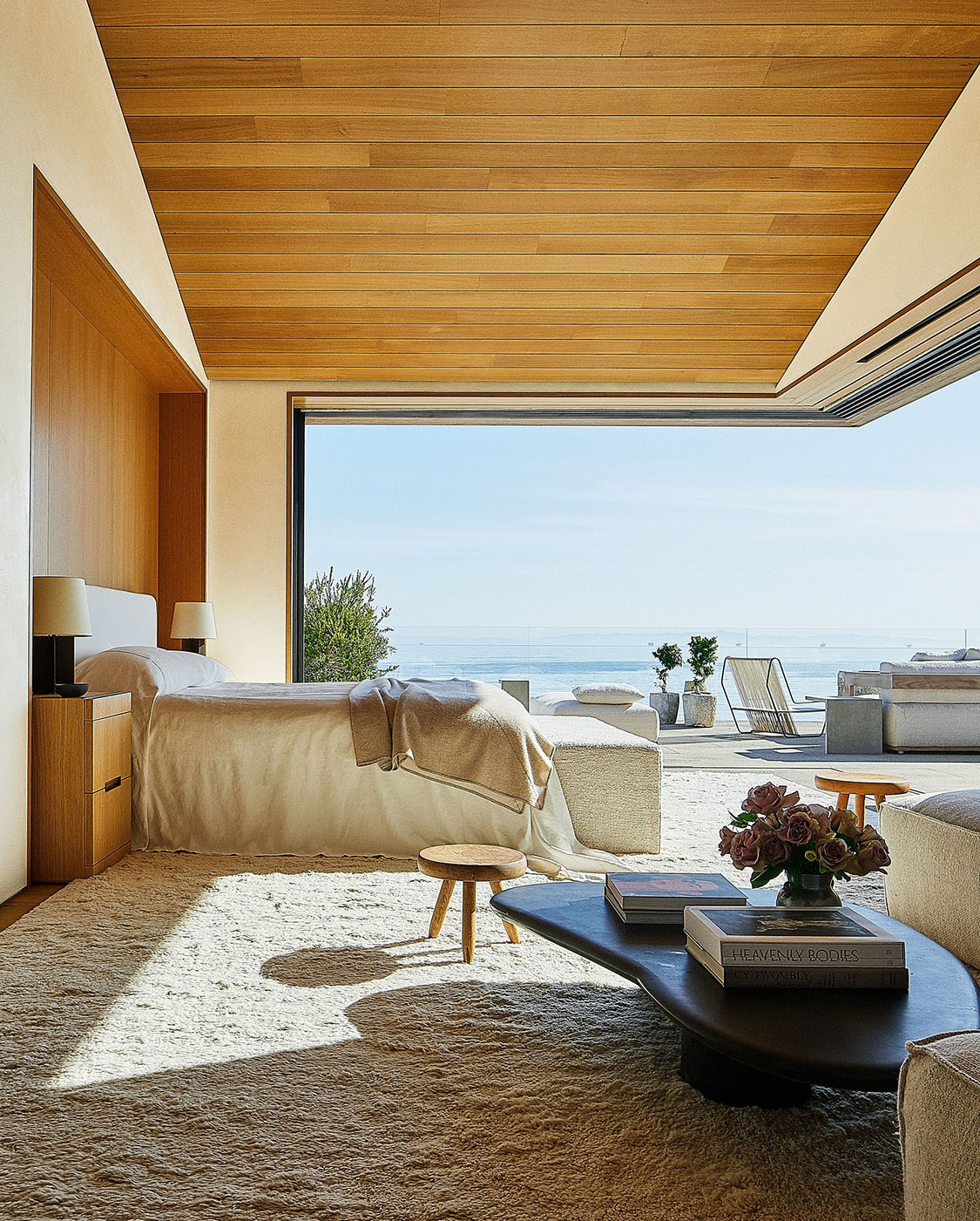 Inside, the drama of the magnificent Pacific Ocean truly unfolds through an open and grand 40-foot-wide, column-free common space. And although the ocean is the main attraction in nearly every room and the overall tone is minimalist, each space includes remarkable examples of vintage, midcentury modernist and contemporary furniture, and both ancient and modern pieces of art. 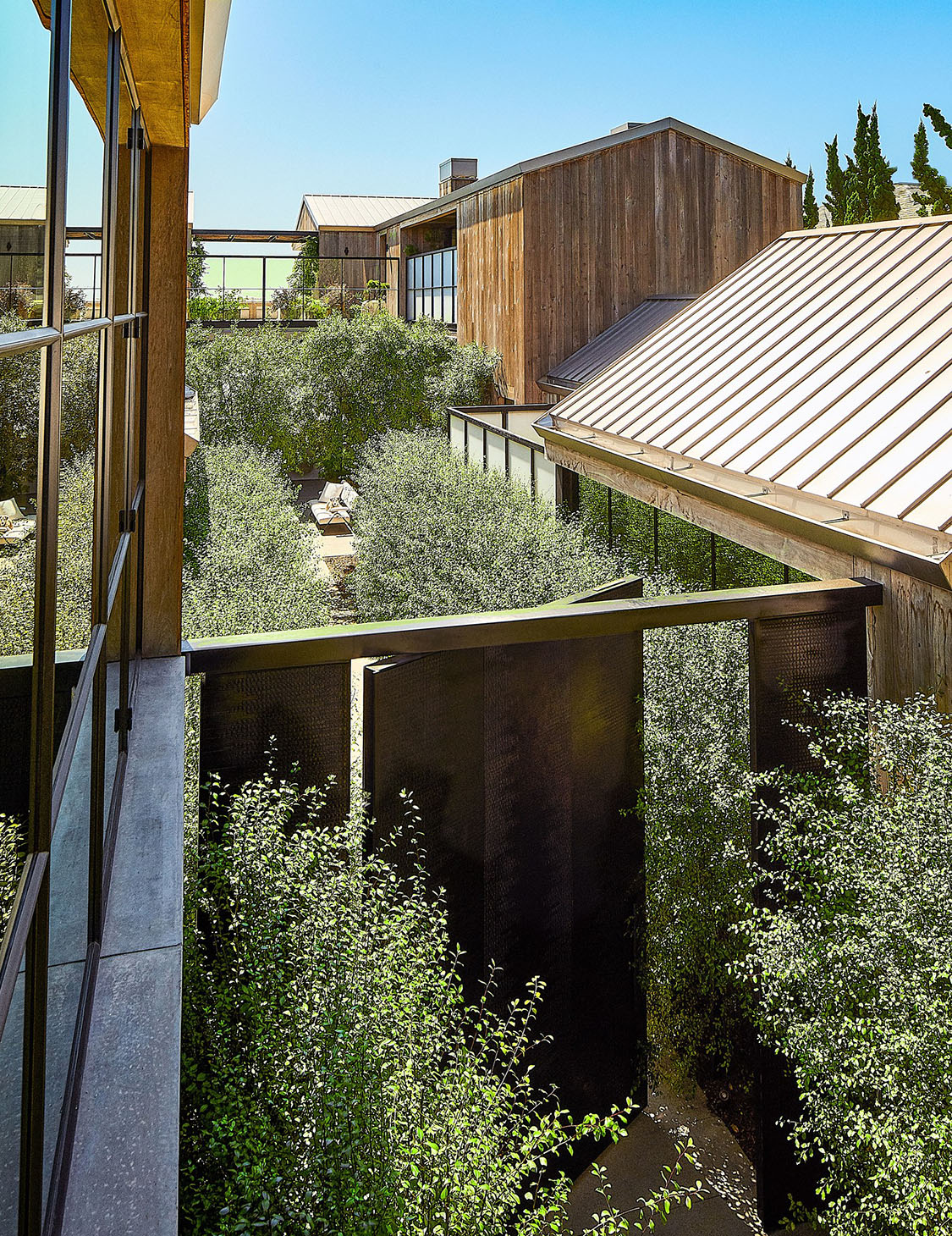 The most unusual and openly glamorous piece, a mirrored bar cabinet of silver-plated brass and glass by Milan-based master of dramatic furniture Vincenzo De Cotiis, is located in the smaller dining room. The limited-edition cabinet is available through the Carpenters Workshop Gallery where Donat’s work is also sold and exhibited. Tuija Seipell. 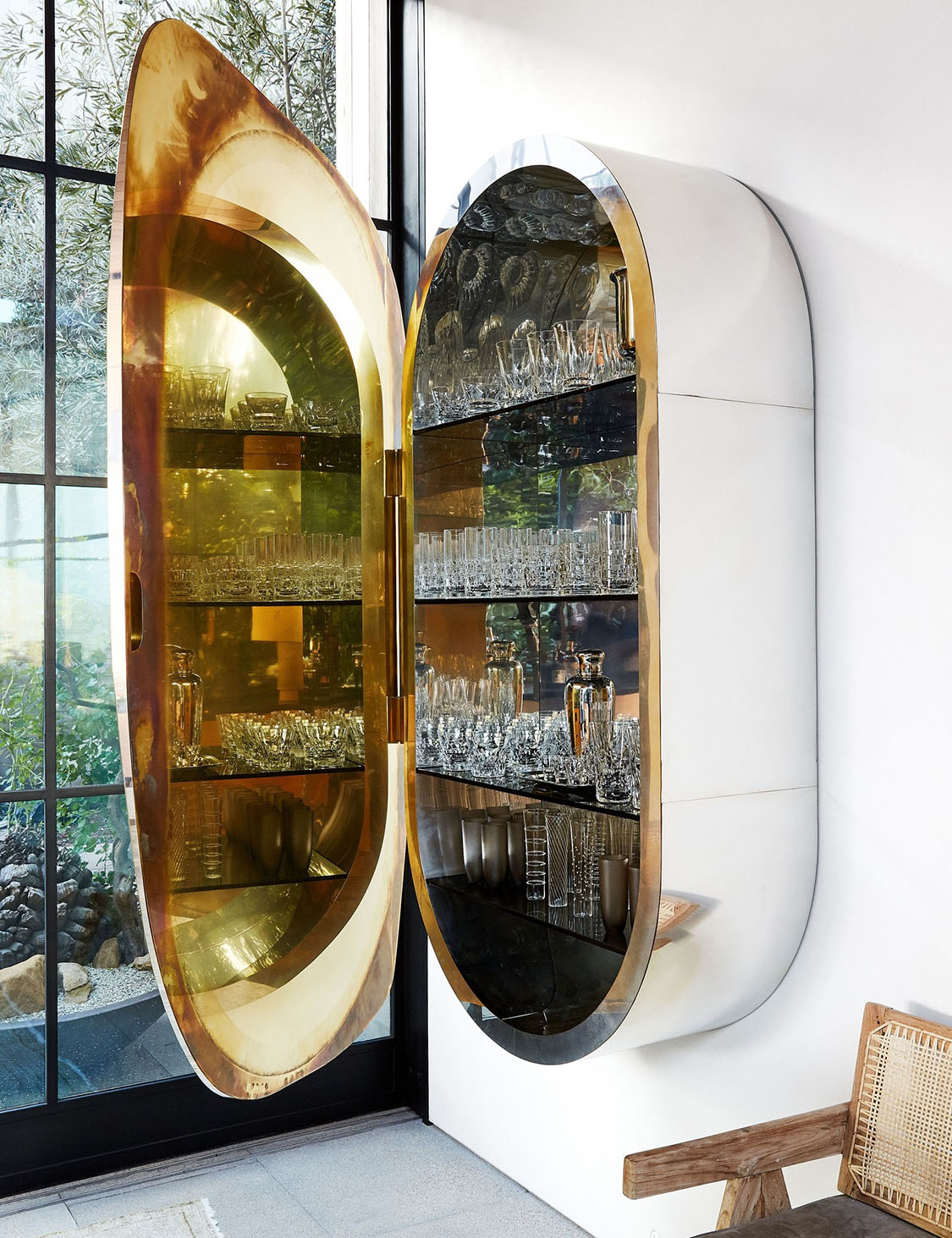