Progressive design — cutting-edge art — political undertones — socially significant statements on the state of humanity — not exactly what comes to mind in a city like Beijing, but about 45 minutes from the centre of town (ie Tiananmen Square), the Bauhaus-inspired, Soviet-funded former electronics factory complex is transforming into the 798 / Dashanzi Art District. And it is no wonder Nike recently chose the 798 District to open its own gallery: Nike 100 — a retrospective of sorts showcasing 100 Nike innovations from the past fifty years.
A billboard-sized shuffling wall rotates athletic silhouette images across the fa’ade of the building. Upon entry, 100 Apple iTouches welcome visitors, while swooshes and familiar colours pierce through from the gallery space. The dynamic fa’ade feature shuffles across the ceiling of the gallery, and iconic orange shoebox forms are highly stacked along the length before opening up to a massive demonstration space. 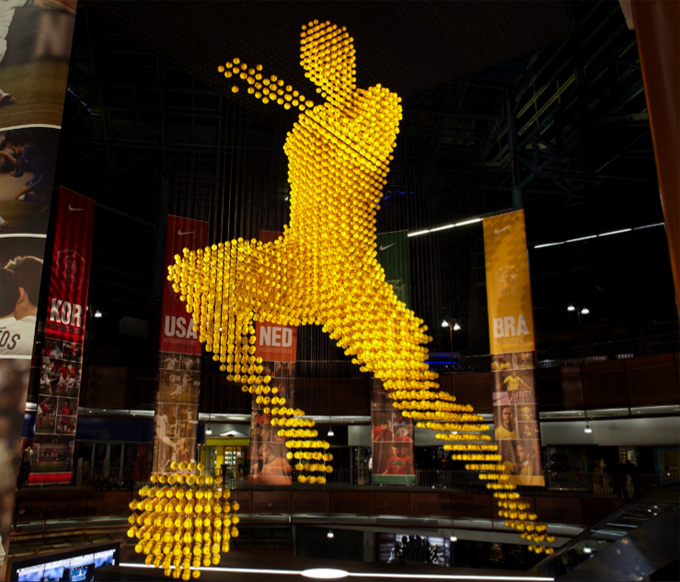 Pulling out from the orange boxes as well as in small alcoves along the sides, Nike has chosen ‘100 artifacts from the Battle Against Drag’ — items inspired by Nike’s co-founder and legendary athletics coach Bill Bowerman’s desire to accomplish more with less. Case-in-point — Number 006: sample pieces of 1967 track surfaces with the consistency of gravel evolving to Number 008: the surface of Bowerman’s waffle iron that inspire changing the surface of the sole of running shoes to provide traction on new urethane track surfaces; resulting in Number 009: Tiger track shoe with Waffle Outsole, which helped produce 44 All Americans, 19 Olympians and 12 American record holders under Bowerman’s watch as a coach.

And where would Nike be without its world-class athletes? Various artifacts pay homage to basketball player, Michael Jordan and his Air Jordan shoes. Each component of sprinter Michael Johnson’s ‘Gold Shoe 1’ has been dissected and analysed, and footage of Johnson in motion blaze across display walls.
Anyone planning on being in Beijing this August, or ever, don’t leave without spending at least a half a day wandering around 798 — and once there, learn a little more about Nike and how it’s earned its place in our world at the Nike 100 Gallery. Just do it. – Andrew J Wiener