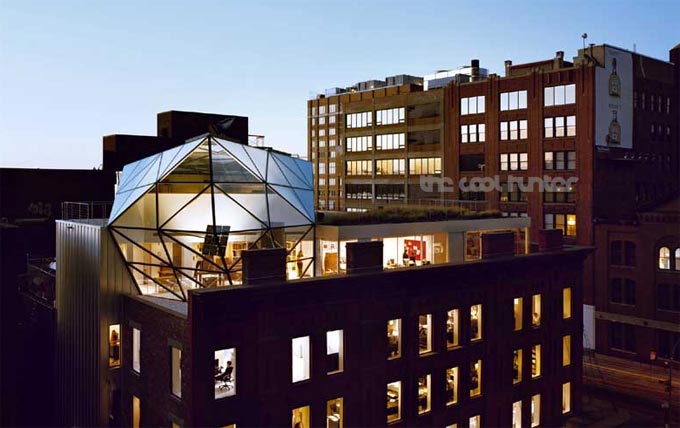 Diane von Furstenberg Studio’s new headquarters fits perfectly in New York City’s fashionable Meatpacking District, also known as the Gansevoort Market Historic District. The new, six-story building is wedged between two historical, landmarked facades that resemble the wall props in Cirque du Soleil’s La Nouba. One corner of the structure is topped by a Olot, Spain-made faceted glass sphere that is part of the penthouse suite and seems like a gigantic diamond fallen from the sky.
In the design, New York-based WORK Architecture managed to combine old and new, light and dark, openness and enclosure, artistry and practicality. The building houses DVF’s flagship store, a 5,000-square-foot showroom and event space, offices and studios for a 120 people, an executive suite, and a penthouse apartment. 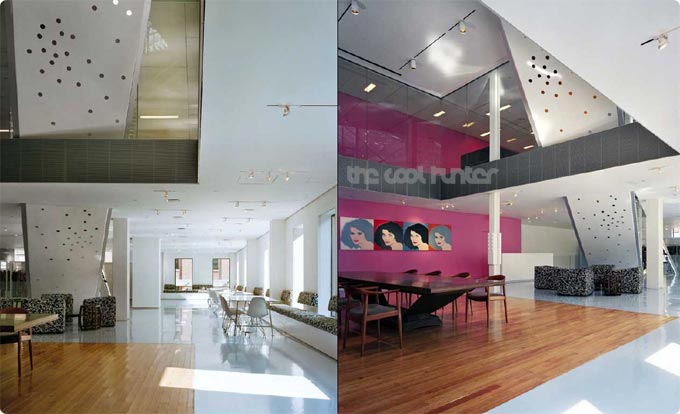 Inside the building, the chief feature is the ‘stairdelier,’ a wide stairway that connects the floors and distributes light throughout the building. Flexibility characterizes all of the public areas. Pivoting walls and built-in unfolding ‘steamer-trunk’ structures allow for a wide use of the space for fashion shows, photo shoots, events and parties.
WORK was founded in 2002 by Beirut, Lebanon-born Amale Andraos and Rhode Island native Dan Wood. Many of their projects are in New York, but their work includes everything from a master plan of an Icelandic town to a theatre stage set, from low-income housing towers in New York to a luxury residence in Panama, plus retail, office and residential projects around the world. WORK is also designing 14 DVF stores in 11 countries.
Diane von Furstenberg was born in Brussels, Belgium, 61 years ago. She started her fashion designer career in 1970. Famous for her wrap dresses, which she started creating in 1973, she has become a veritable fashion icon. She is also the current president of the Council of Fashion Designers of America, the non-profit association of America’s fashion heavy-weights. By Tuija Seipell