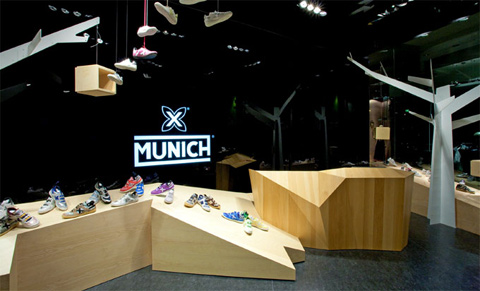 Established by the Berneda family in 1939, Barcelona’s own sports shoe house Munich continues to stay on top of things. In the 1970s, Munich made tracks with the Made in Barcelona footwear line and the X logo.
Now, Munich has just opened its new sports shoe concept store in Barcelona’s weird and massive superblock of a mall, L’illa Diagonal.
The Munich flagship store was designed by Ignasi Llaurad’ and Eric Dufourd of dear design, a design and architectural firm the two established in Barcelona in 2005.
Dark-glass surfaces, mirrors, metal trees and cage-like boxes hanging from the ceiling (from which the shoes have ‘escaped’), all carry a carefree, experimental and impermanent air. The angular and clunky space with its hard edges and seemingly moving parts is clearly an attempt to say that the septuagenarian brand is nowhere near slowing down. – Tuija Seipell