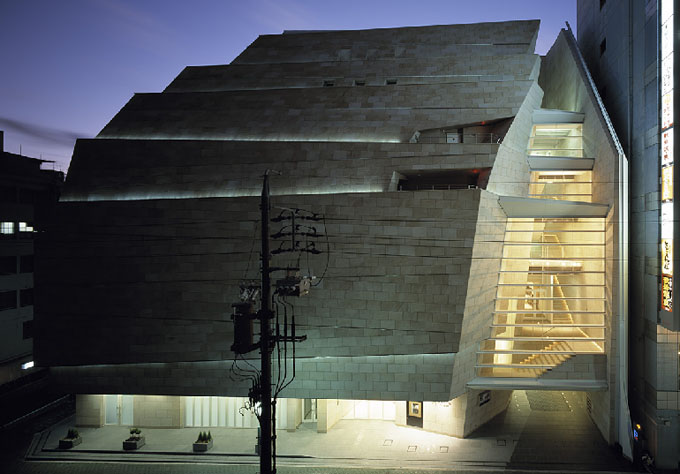 Norihiko Dan – born in 1956 in the Kanagawa Prefecture in Japan – is the designer of the beautiful Munetsugu Hall, completed in 2007 in Naka Ward, Nagoya, Japan. It is a privately-funded concert hall that continues the age-old but almost-dead tradition of wealthy arts patrons initiating and financing the creation of art spaces. Fluid, white wall shapes are the distinctive feature of Munetsugu Hall’s main performance space. The walls bring to mind artistic sweep marks left by a gigantic builder who in his boredom doodled in his mortar tray with a massive trowel and then let the shapes solidify.
Norihiko Dan has won several architecture awards in Japan and Taiwan including the Distinguished Architect Award of the Japanese Institute of Architecture and the ARCADIA Award Gold Medal in 2007. His work has been part of exhibitions in Japan, Taiwan, USA, Canada, Germany, Austria, Italy and the UK. In addition to being a respected architect and educator, Norihiko Dan is also an architecture historian and writes novels and screenplays.
Munetsugu Hall’s generous benefactor is Tokuji Munetsugu who with his wife Naomi made a fortune in the restaurants business. Their company Ichibanya Co. Ltd. (based in Aichi, Japan) operates more than 1,000 curry and pasta restaurants under the names Curry House CoCo Ichibanya and Pasta de Coco. Munetsugu spent two billion yen to build the 310-seat concert hall. He has also set up a nonprofit organization to support welfare, sports and arts activities. – Tuija Seipell