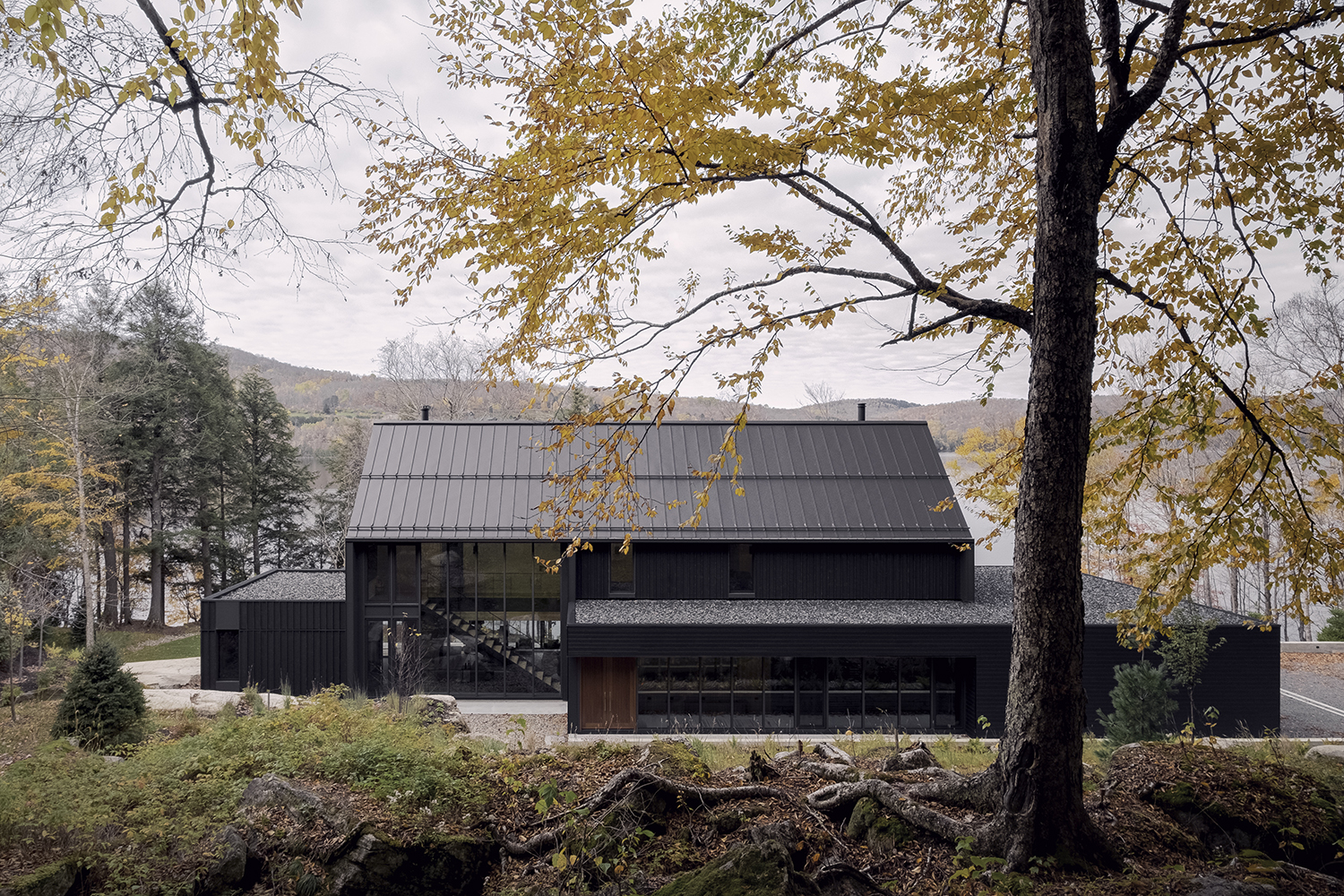 Once in a while, we encounter a space or structure that we end up describing with one version or another of “this is a place where one can breathe.” It may seem an elusive depiction, but it will have to do, once again. 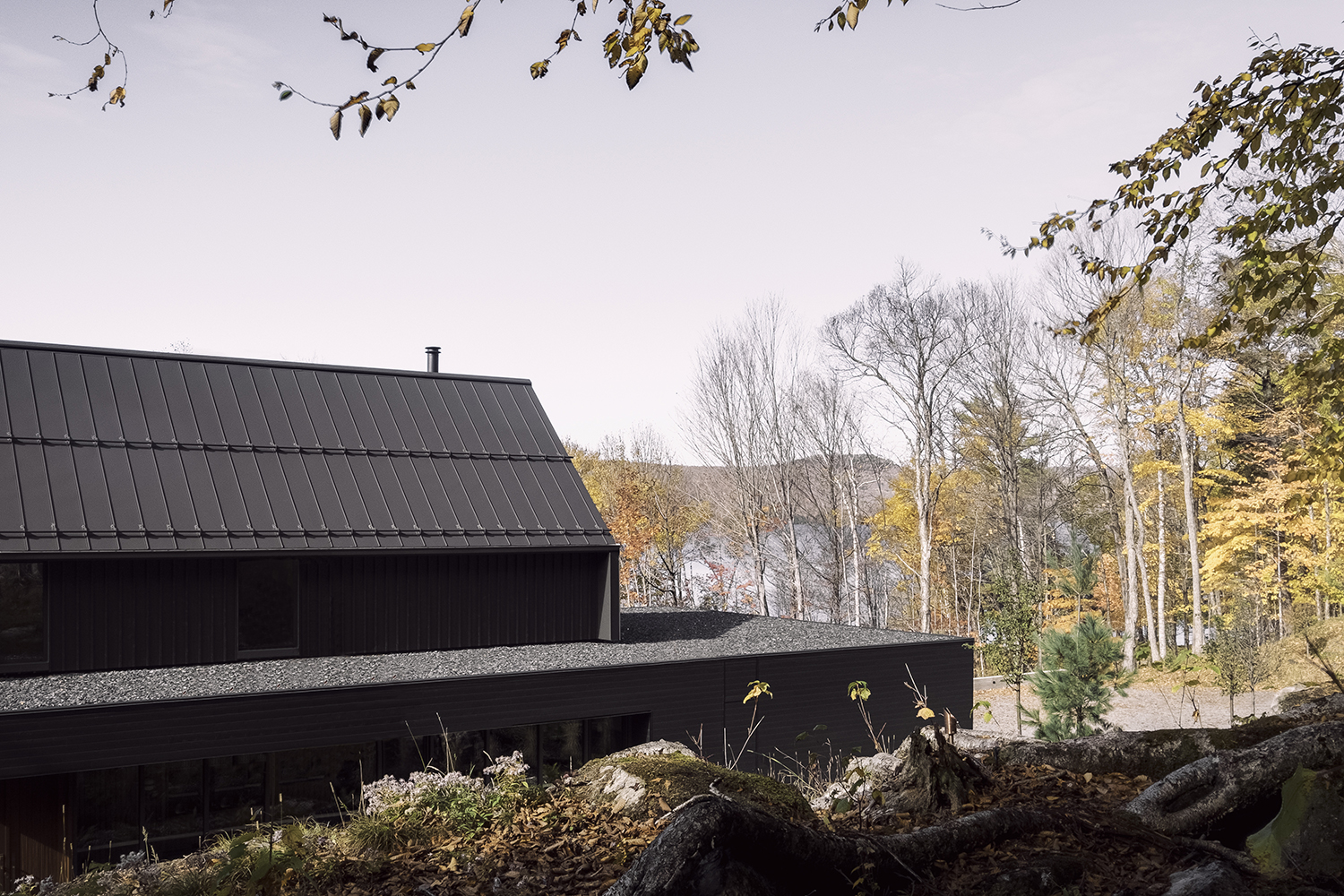 The massive, black barnlike structure, created byAlain Carle, radiates this breathing-space factor in numerous ways. The airy, roomy spaciousness is created through the rough and rocky cliffside setting, the bulky simplicity of the building itself, the stark black exterior, the large windows, the surprisingly light hues of the interior, and the streamlined layout of the rooms. 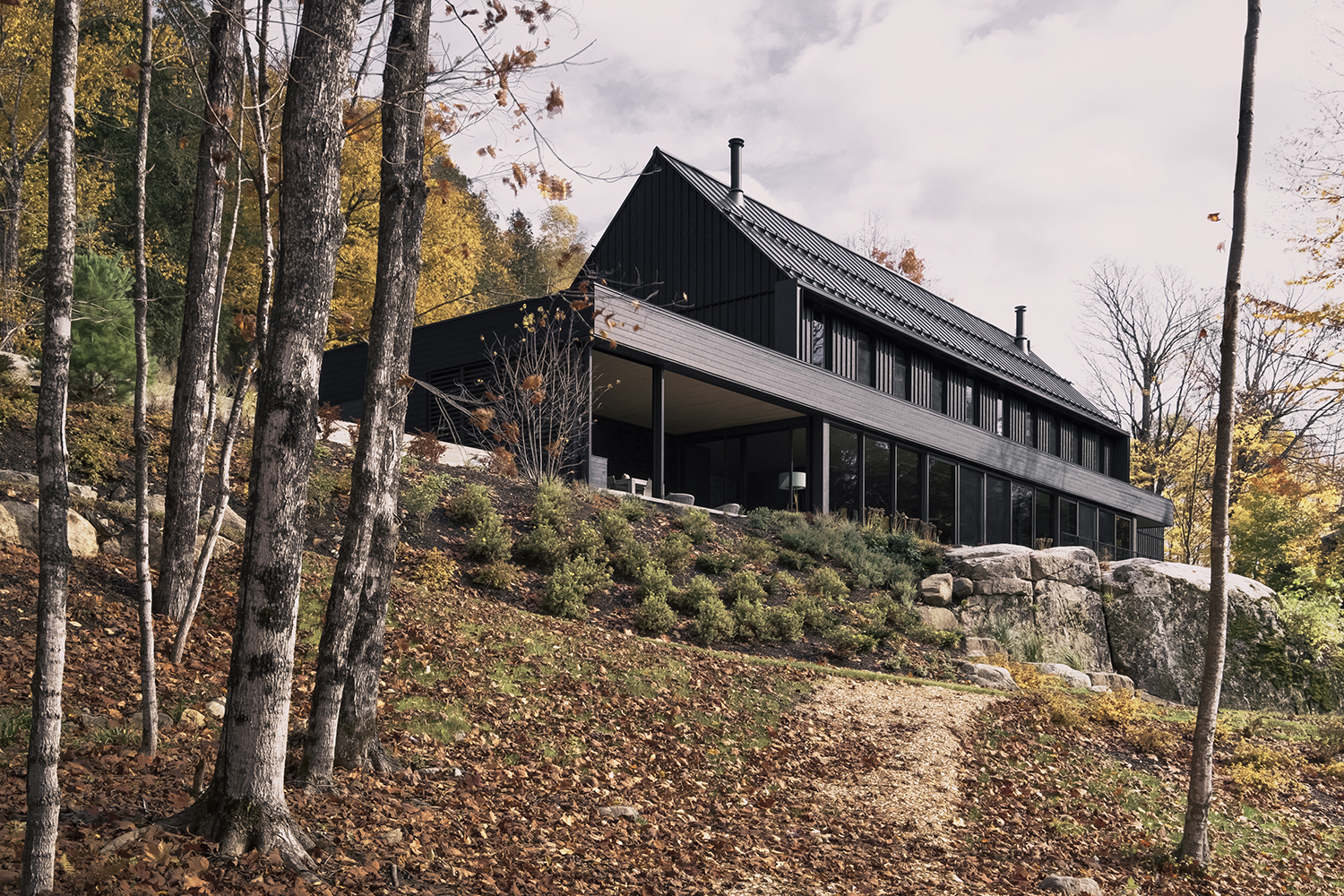 Mont-Tremblant is a city in the Laurentian Mountains in Quebec, Canada, about 130 kilometres (80 miles) northwest of Montreal. It is known for its boreal forests, ski resorts, national park and luxurious vacation homes. Alain Carle’s client, a young family, wanted a secondary home, distinctly different from their primary home in Montreal. 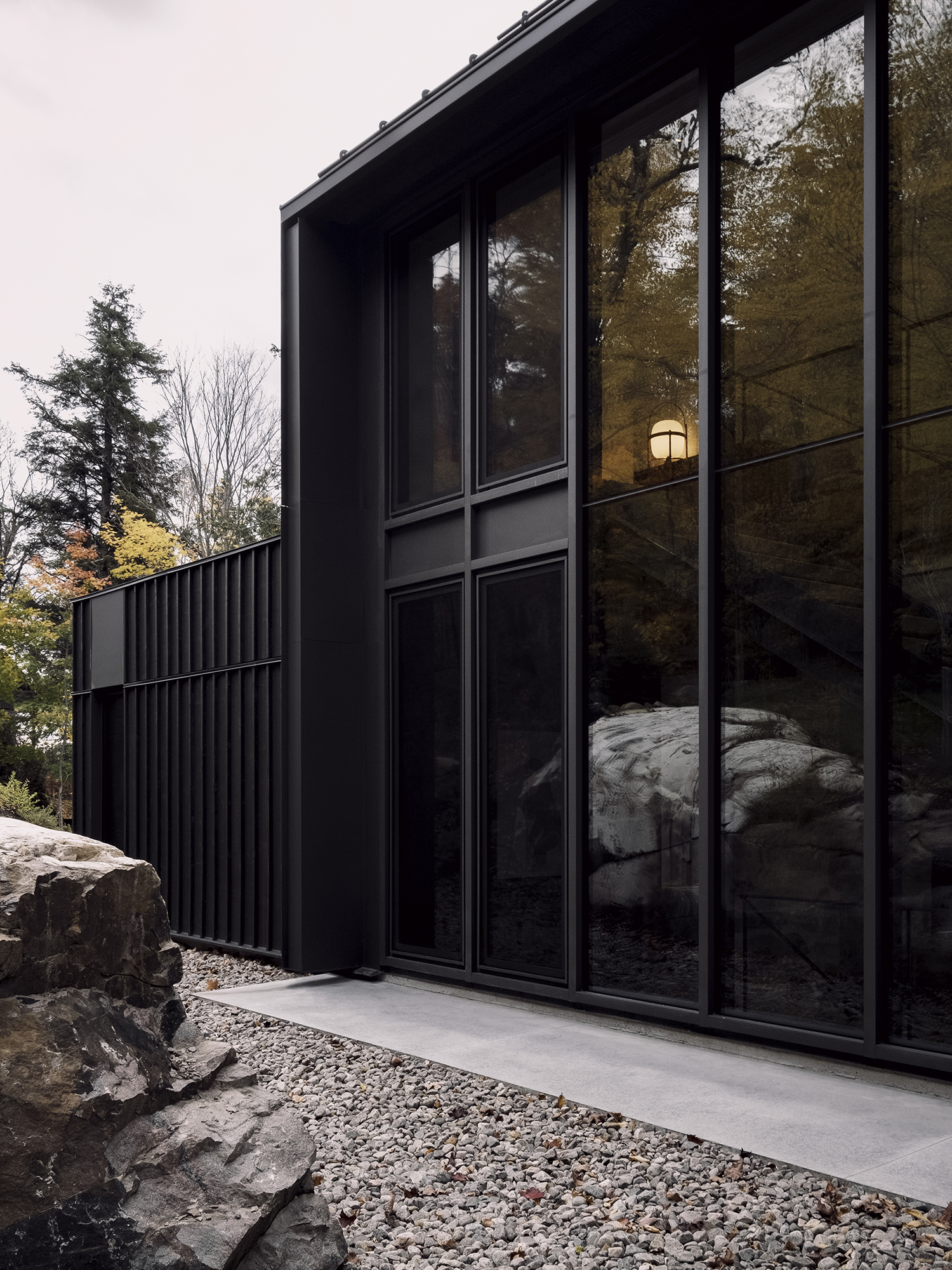 The firm’s lead architect Alain Carle and the project’s lead architect Gabriel Ostiguy took a daring approach to a challenging monumentality of terrain. The steep cliffs rising from Lake Tremblant provided one natural flat ‘shelf’ that was selected as the ground level for the three-level structure. 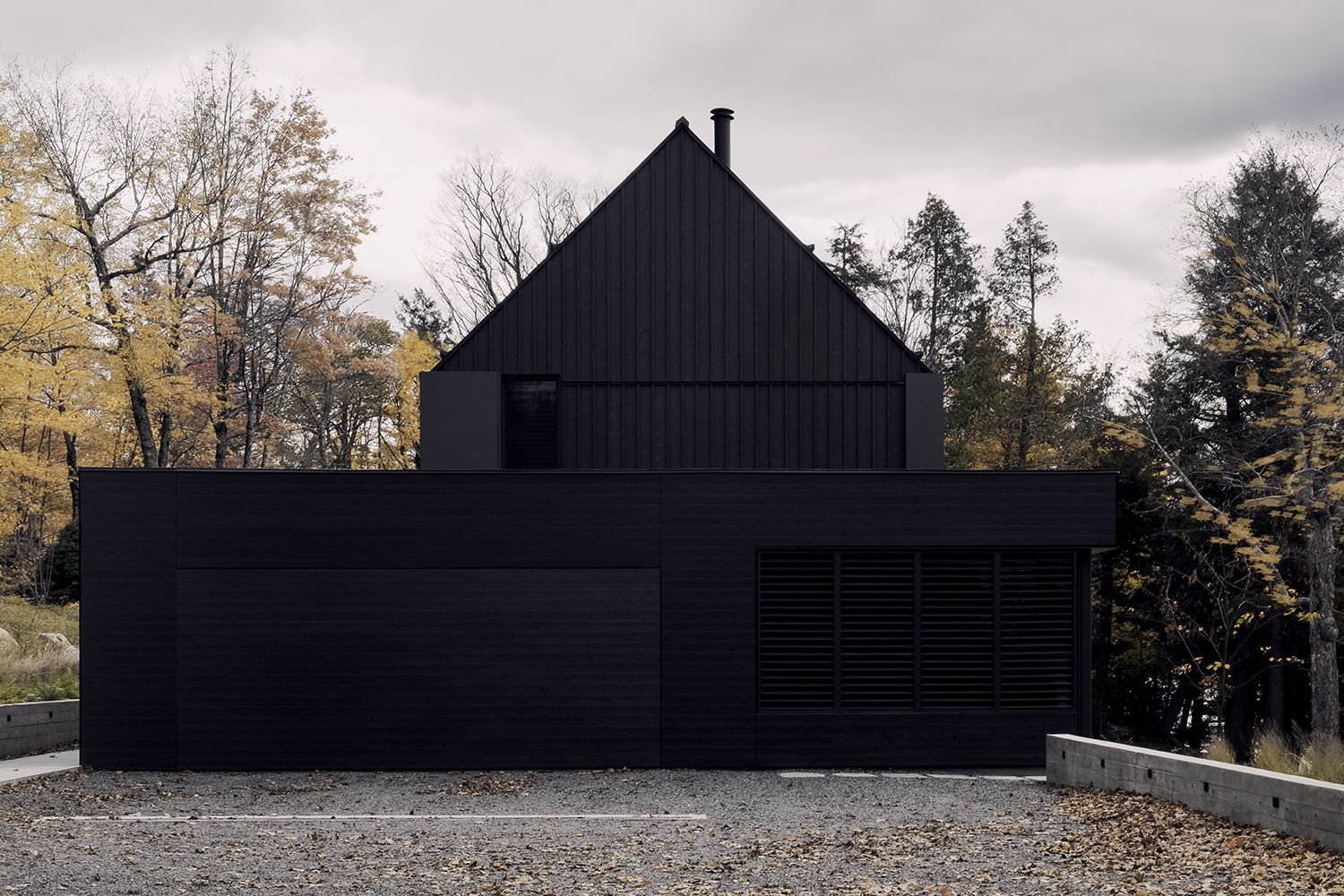 Architect Isaniel Lévesque of Alain Carle Architects describes the dramatic project’s terrain for The Cool Hunter. “This is a 11 944-square-metre plot overlooking Tremblant’s Lake. Natural rock and forest all around the house,” he says. “It is a quiet neighbourhood but you can see the houses on neighbouring lots. This house is far from the road.” 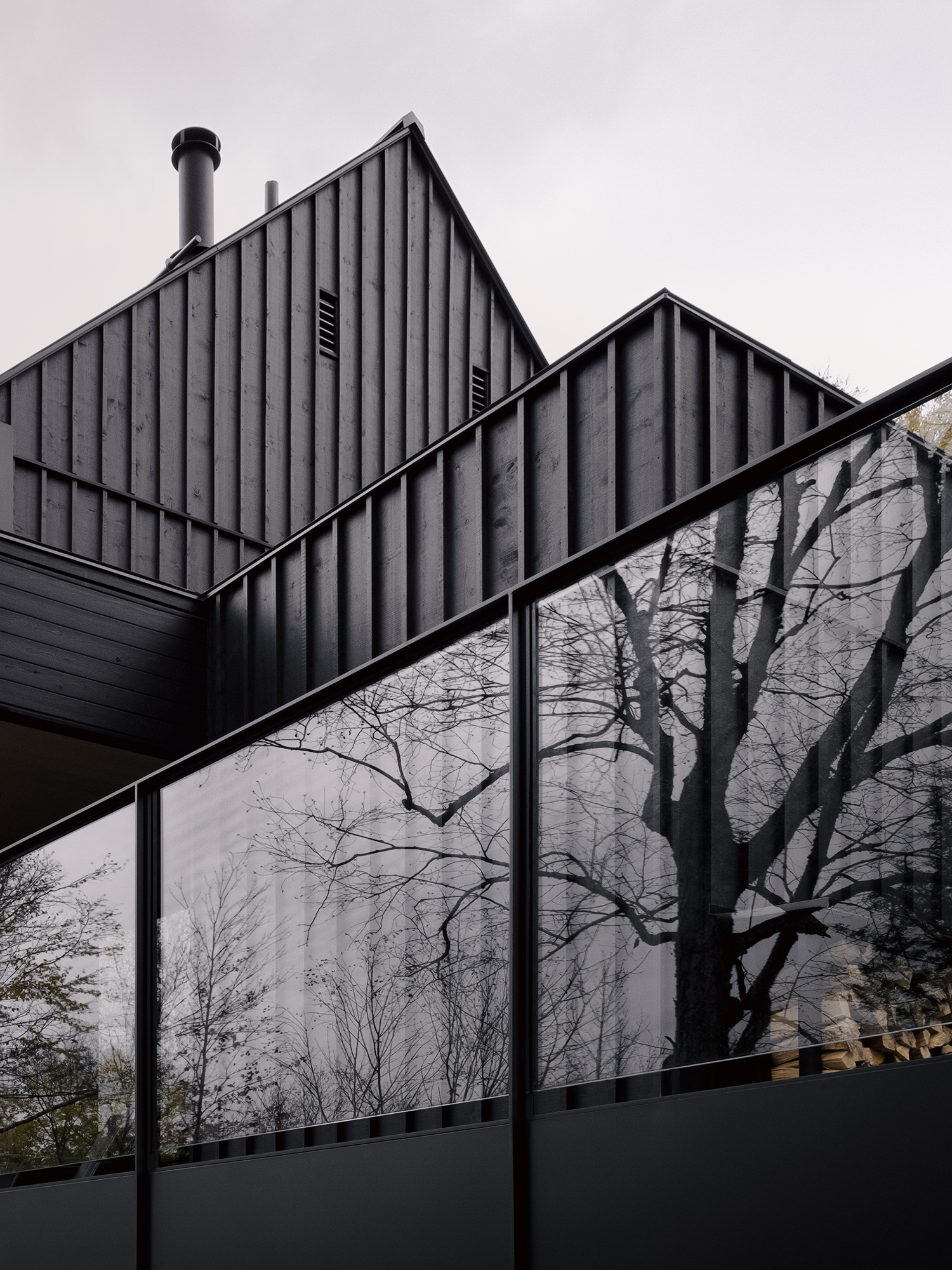 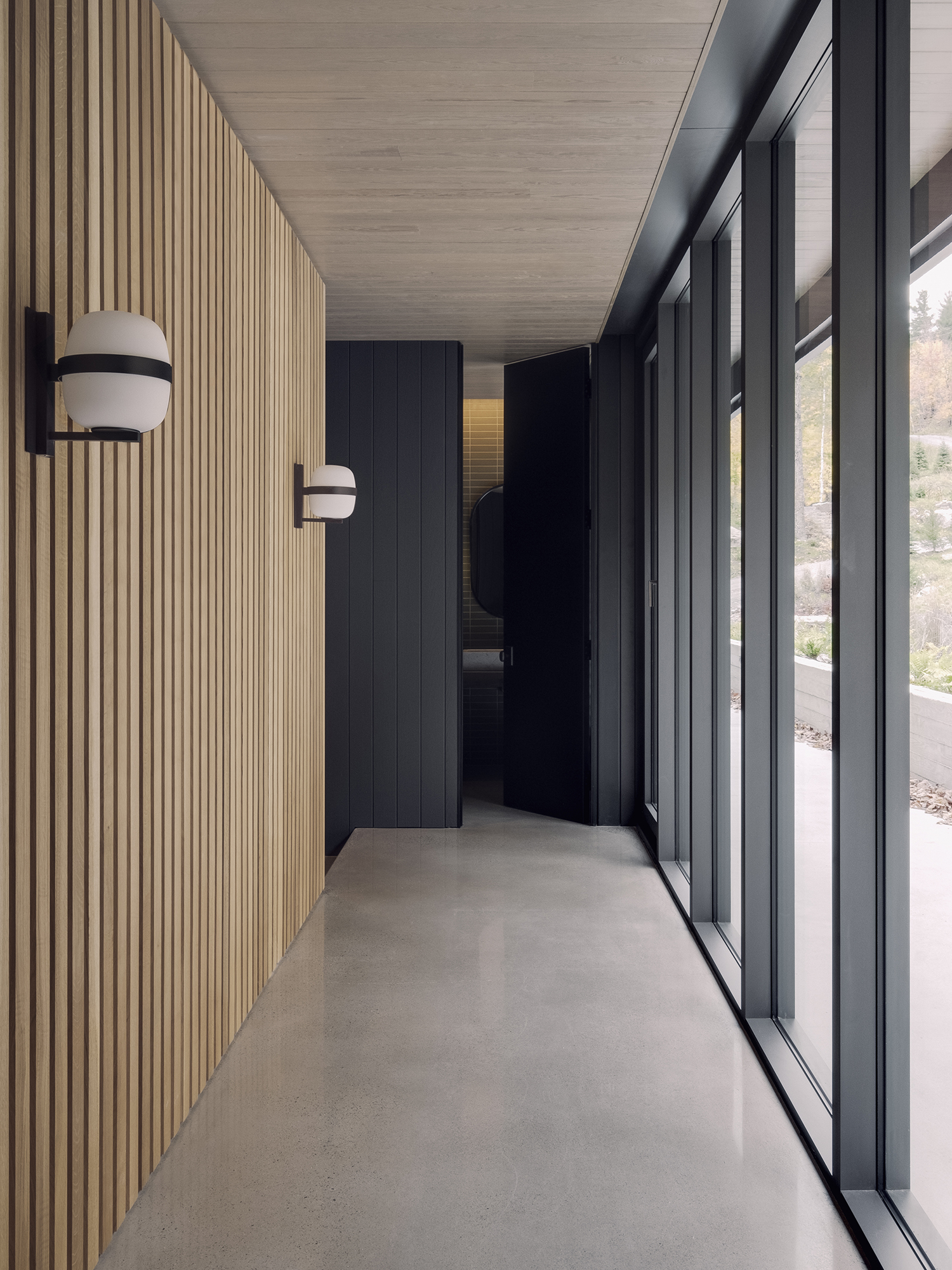 The idea of a black, barnlike building most likely did not come as a total surprise to the clients as Alain Carle has created structures before that have similar basic characteristics: Terrain-hugging profile, black wood-clad exterior, streamlined interior plan. However, the scale of this project was much bigger than the earlier houses. This house is 605 square metres (6,512 sq.ft) in total in size and includes 22 rooms (including bathrooms). 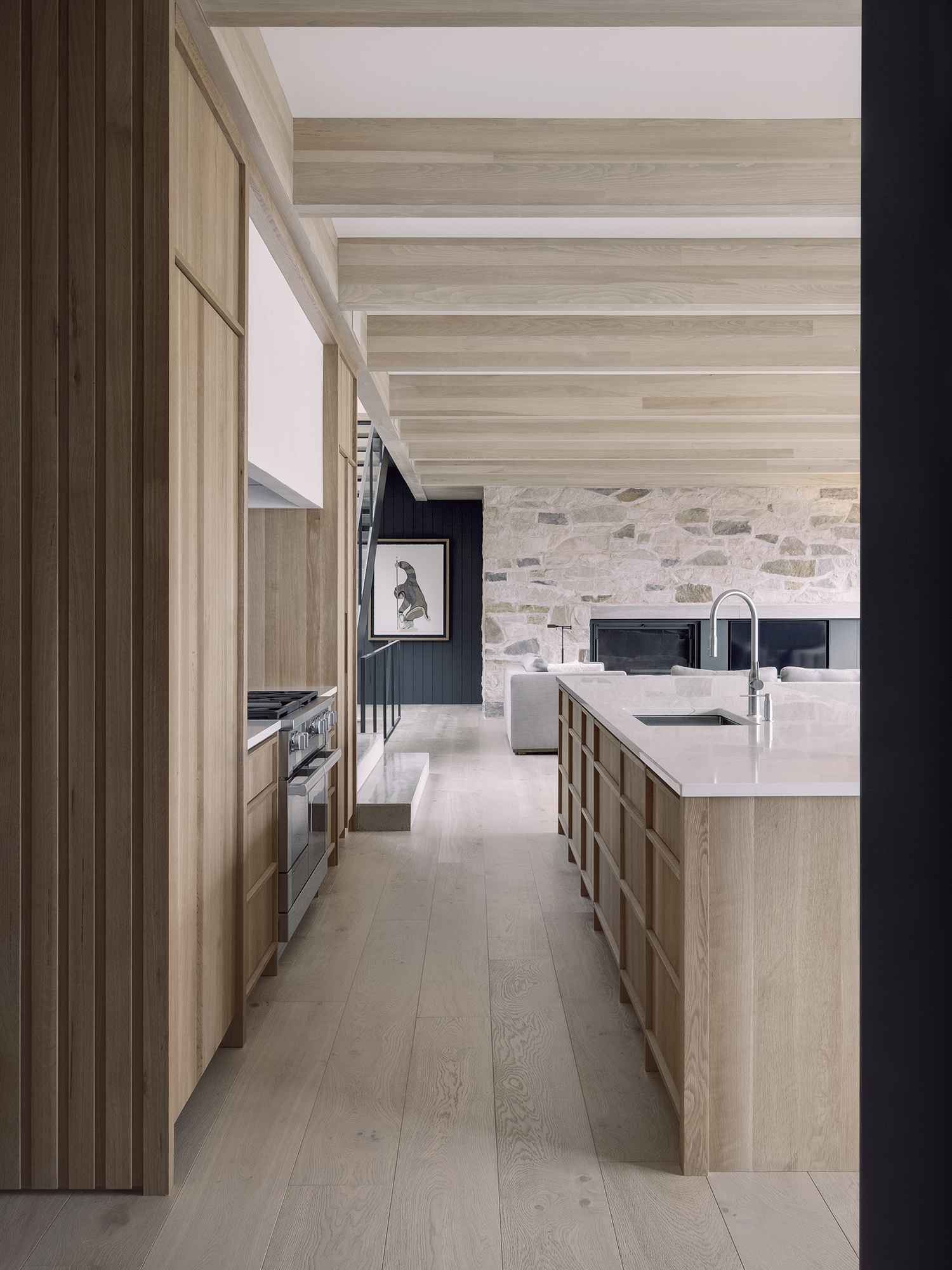 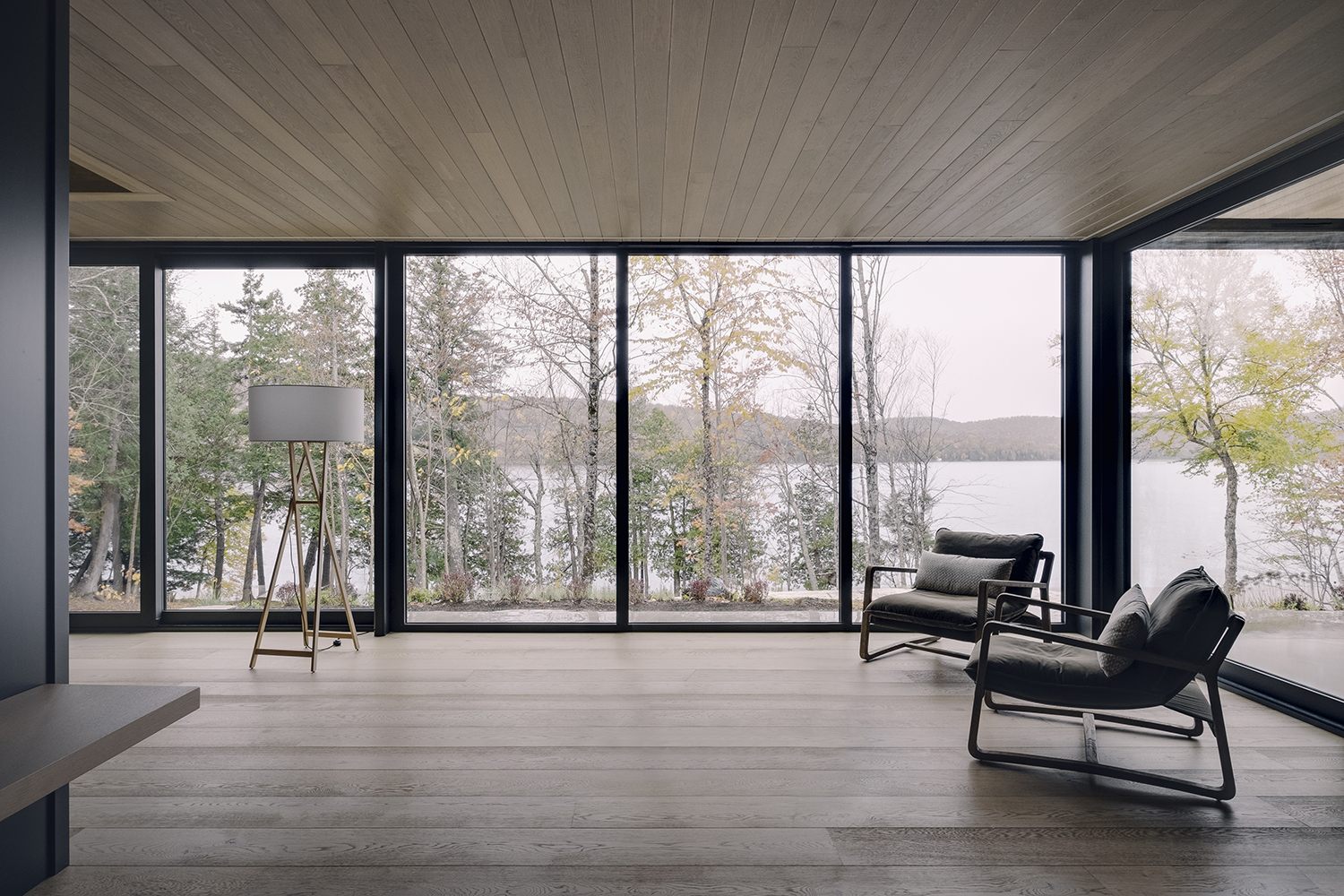 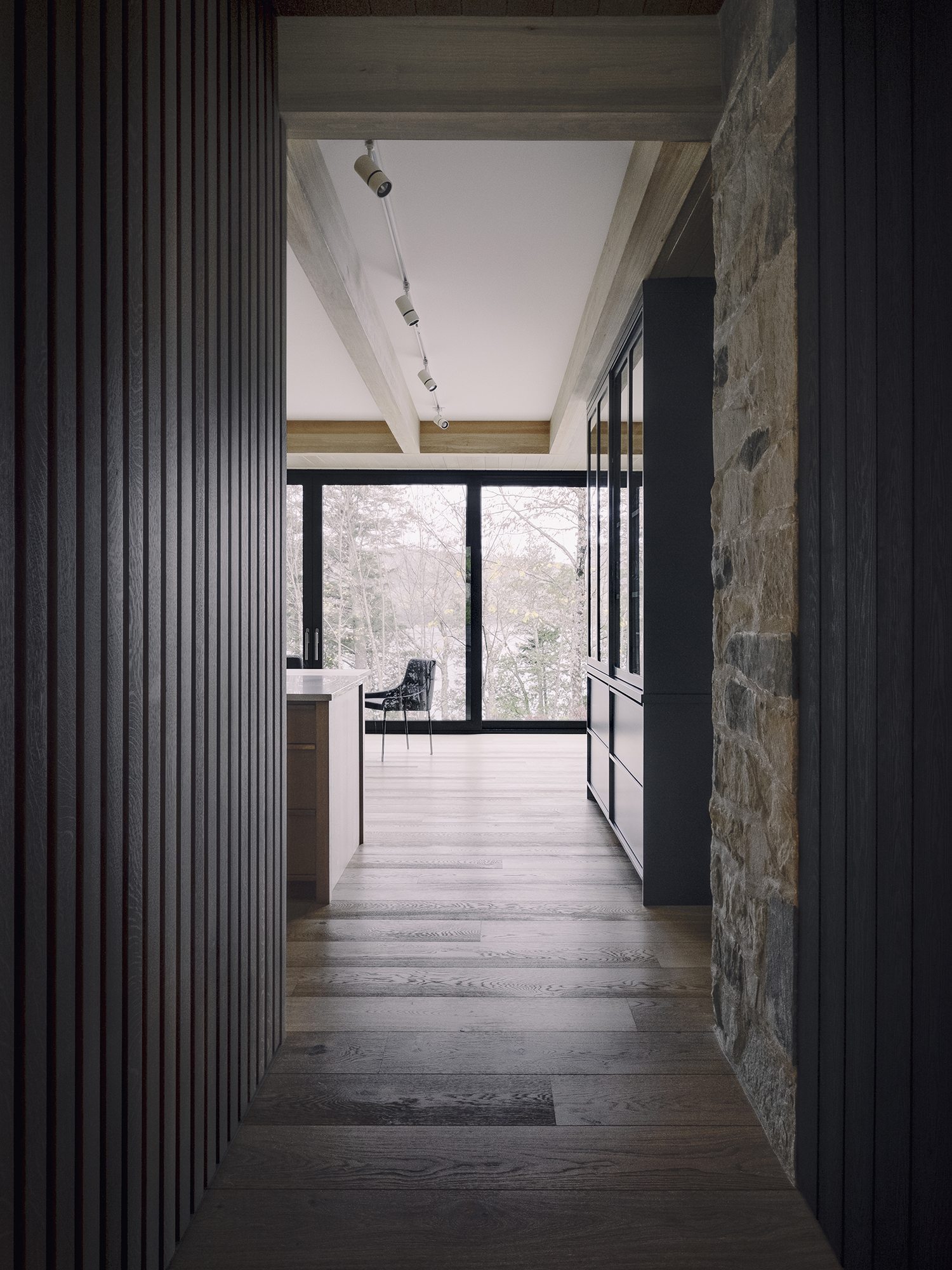 The monumentality of the location is elegantly reflected in the bulkiness of the structure. But it is also incorporated into the interior. Vast window walls bring the lake, forest and rocky cliffs into every room, and natural stone, black panelling and a muted colour palette ensure that the stark language of nature continues throughout. The spaces flow into each other with sightlines carefully considered. We especially love the surprise of the soft-hued kitchen with its light wood floors, ceilings and cabinetry. We are expecting to see images of this house in the winter. The drama of the black exterior will be further heightened by the white surroundings. Breathing space. Tuija Seipell 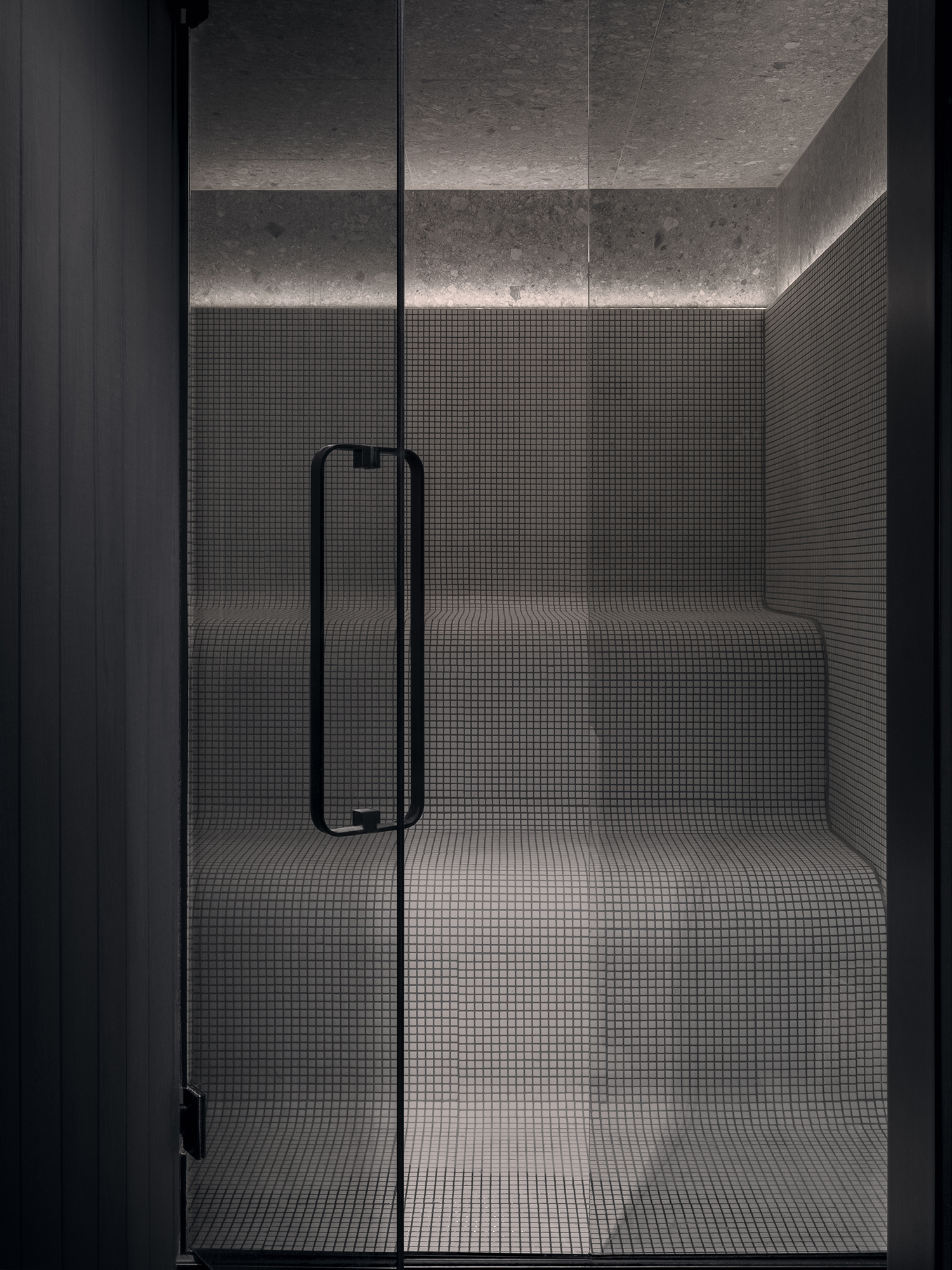 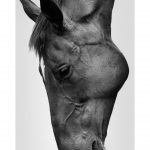