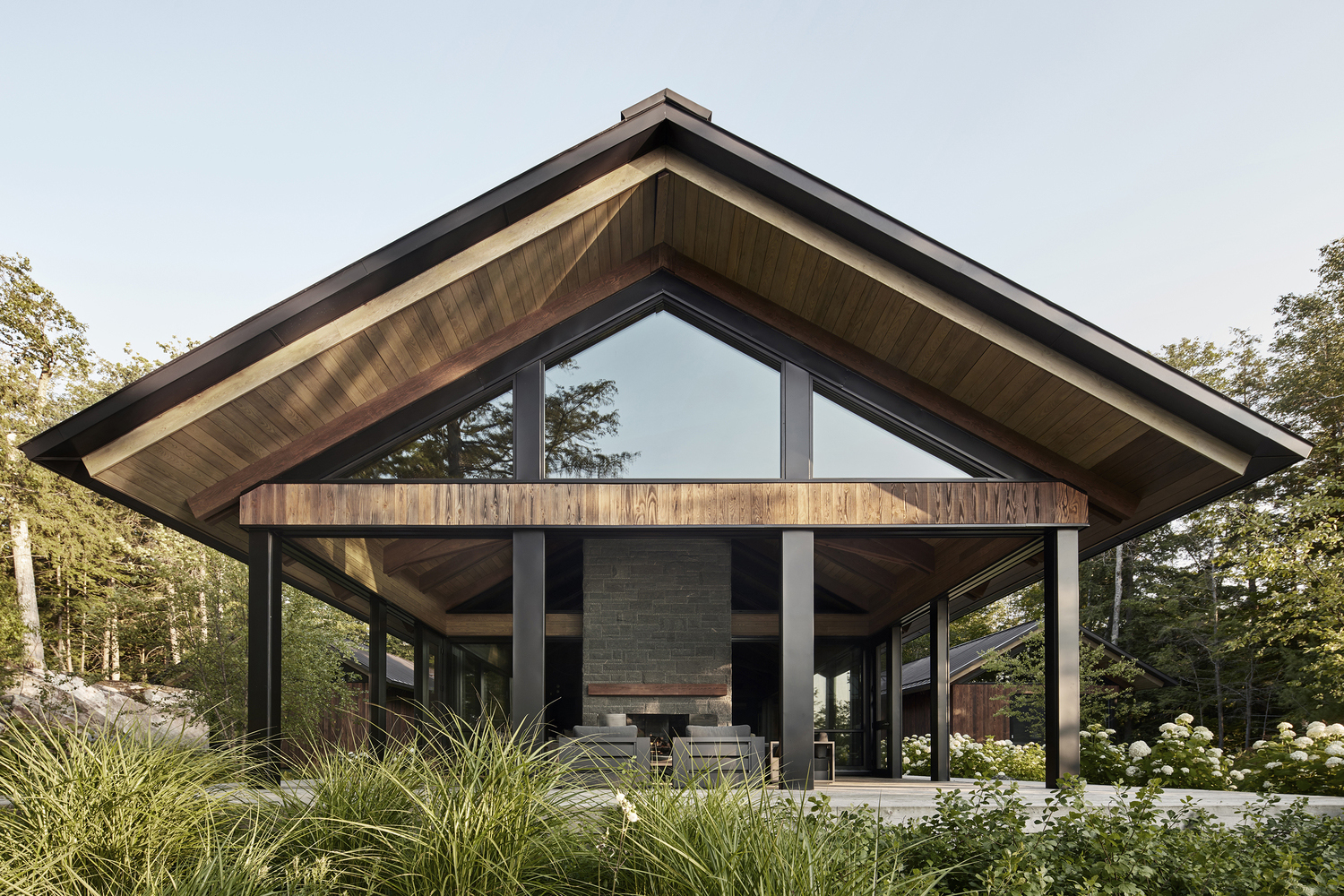 A transformation from devout urbanites to resolute cottage-dwellers was unlikely for Torontonians Renee and Ken Metrick, their sons Andrew and Jamie and their families. They are the third- and fourth-generation owners of the Elte home décor retail brand and its extensions Elte Mkt and bath retailer Ginger’s. 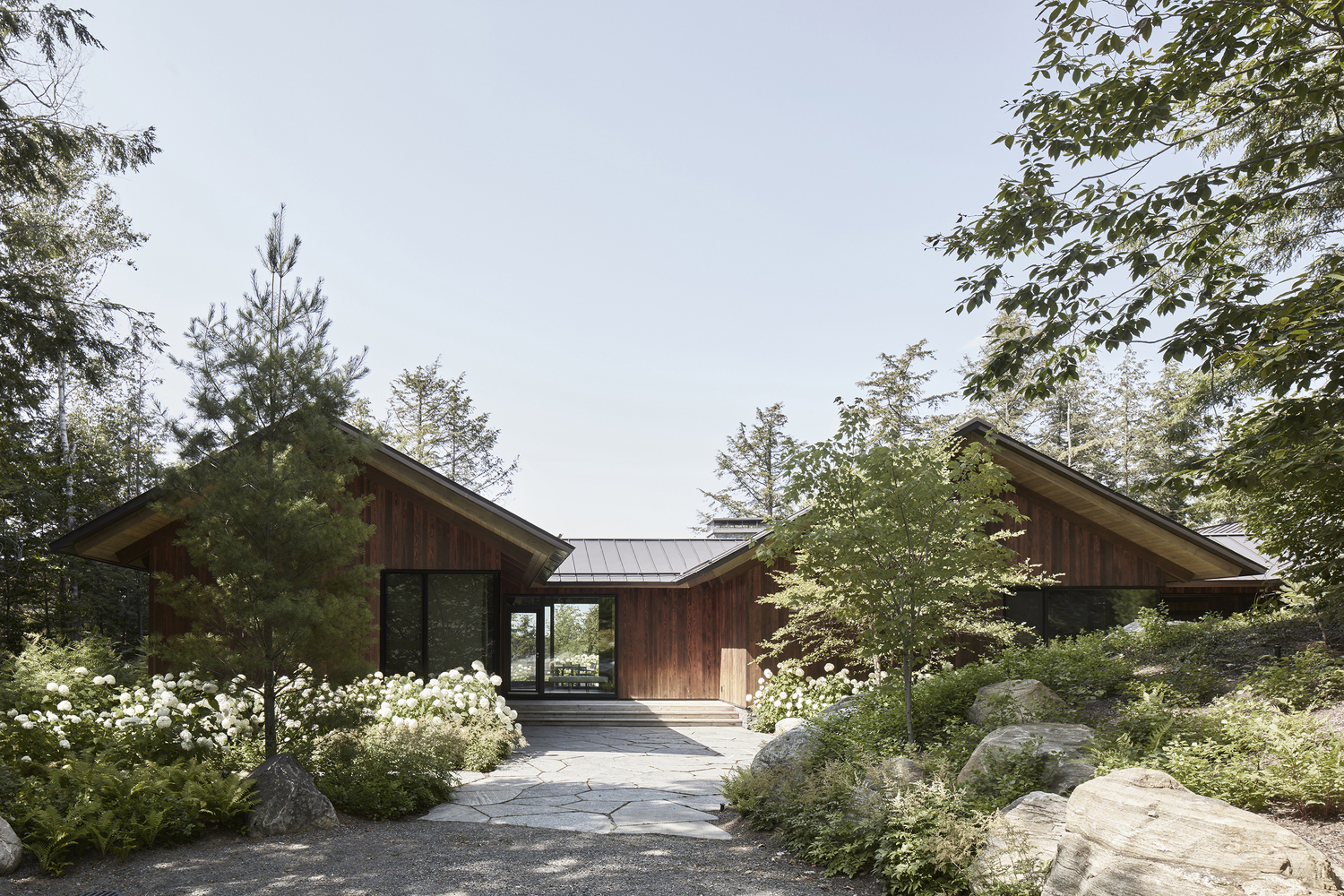 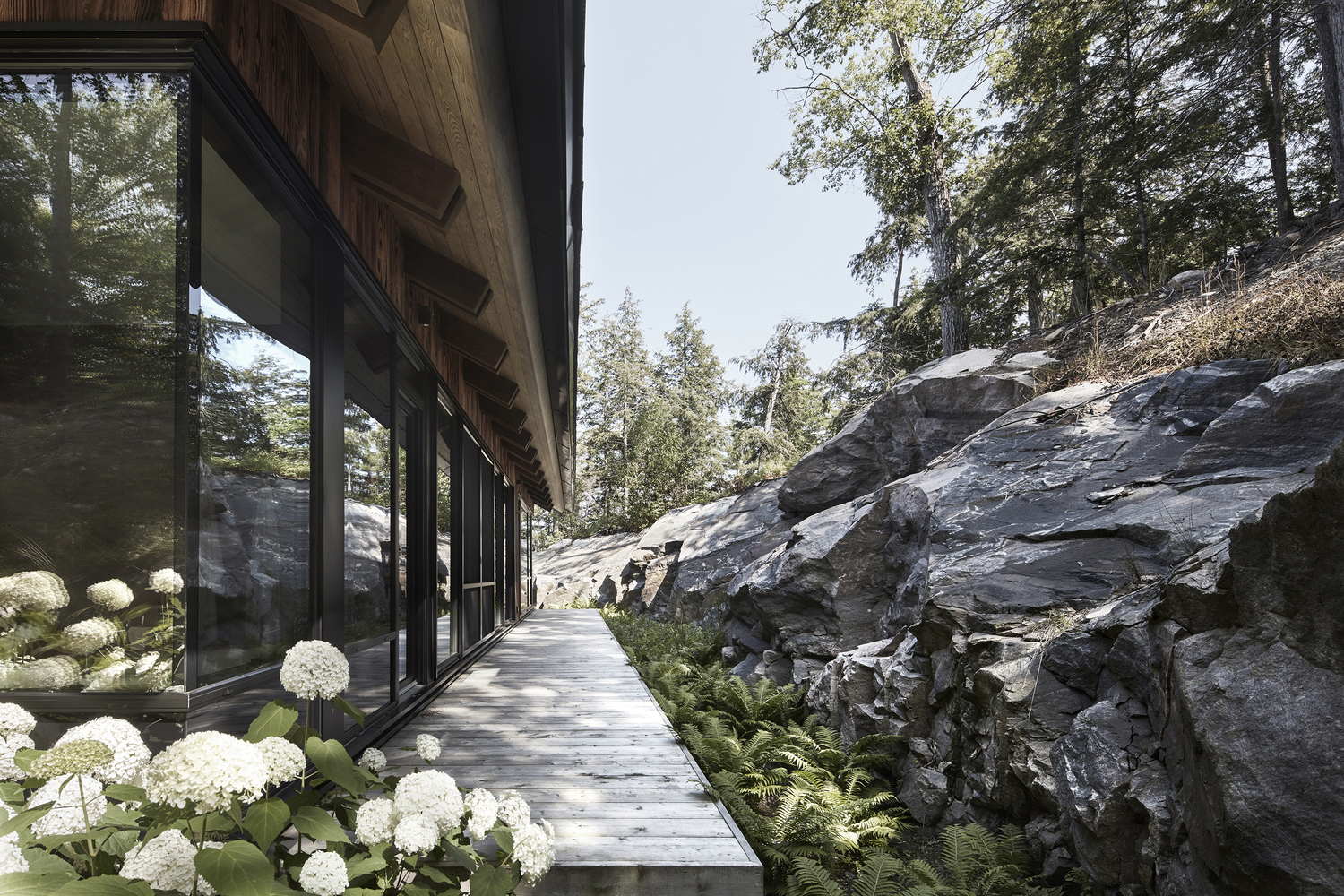 As a family they had proven they are capable of working together during the busy business week. But to want to spend also weekends and holidays with the family? Highly unusual but that is what they wanted. Wishing to establish a place to wind down and relax as a family eventually lead to cooperation with Akb Architects, a Toronto-based residential architecture firm founded in 2004 by Robert Kastelic and Kelly Buffey. 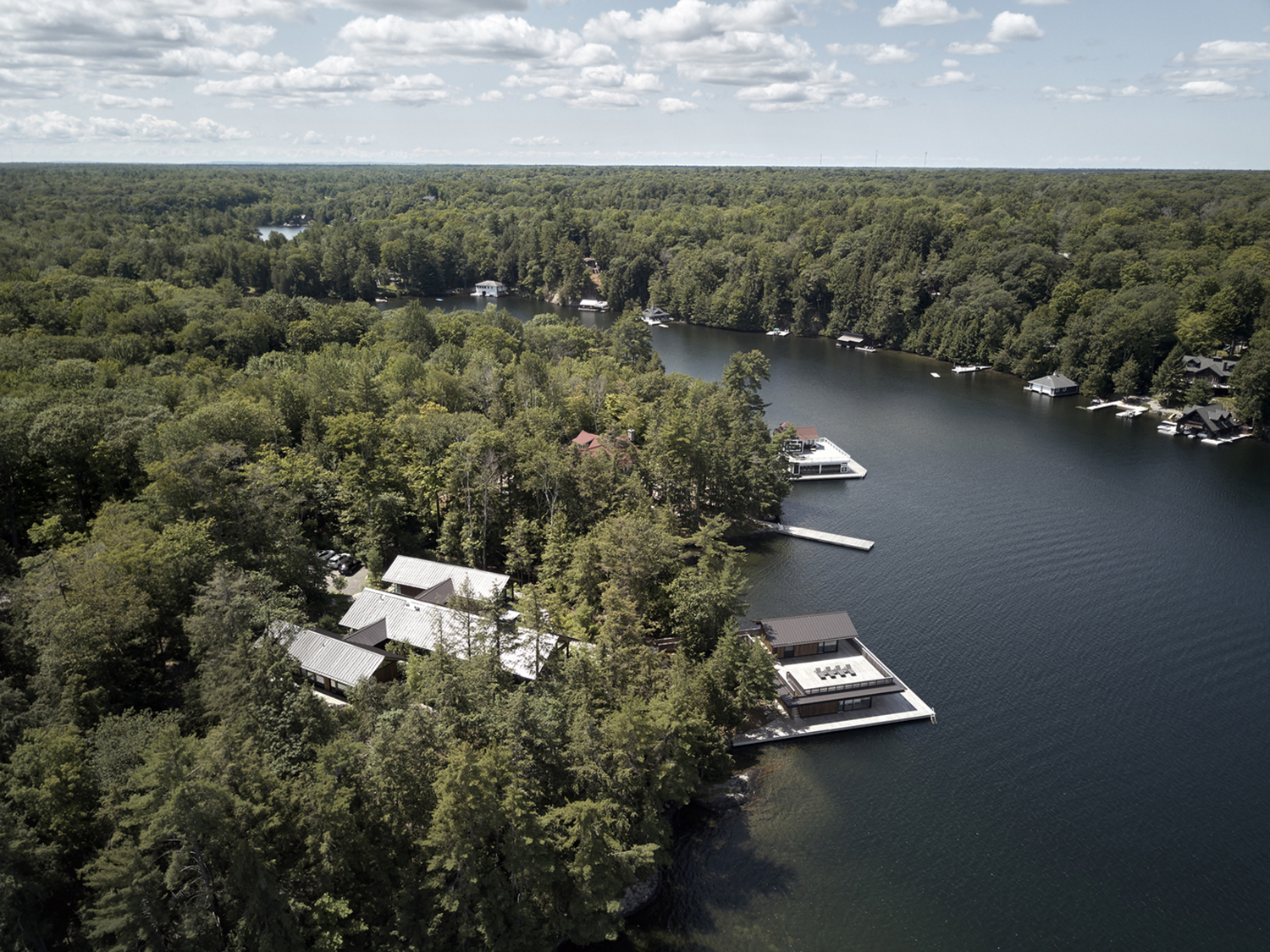 Fast-forward a few years from the initial cottage idea, and the family’s retreat by Lake Joseph in the Muskoka-area of Ontario’s cottage-country two hours’ drive from Toronto, has now become a favourite place for three generations of Metricks. 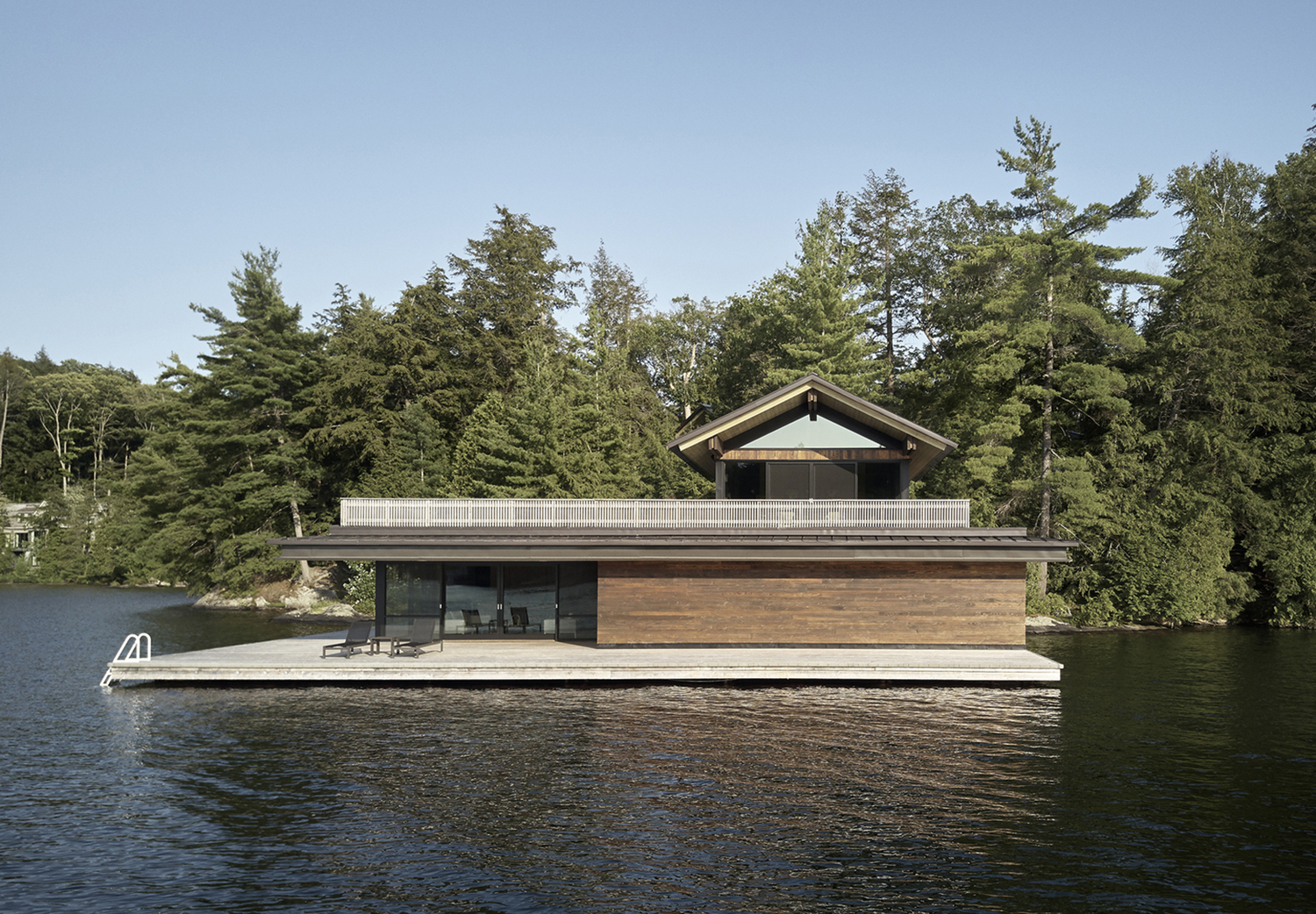 The elegant, wood-clad 5,400 square-foot (501 sq.m.), three-unit retreat has settled into its rocky lake-side site just like old Muskoka cottages should. Dividing the house into three separate but connected units has created a sense of casual lightness. It is not a monolithic, imposing building. It rather resembles a solution that often happens by default in casual secondary residences as the initial cottage grows through additions and attachments to accommodate new generations. 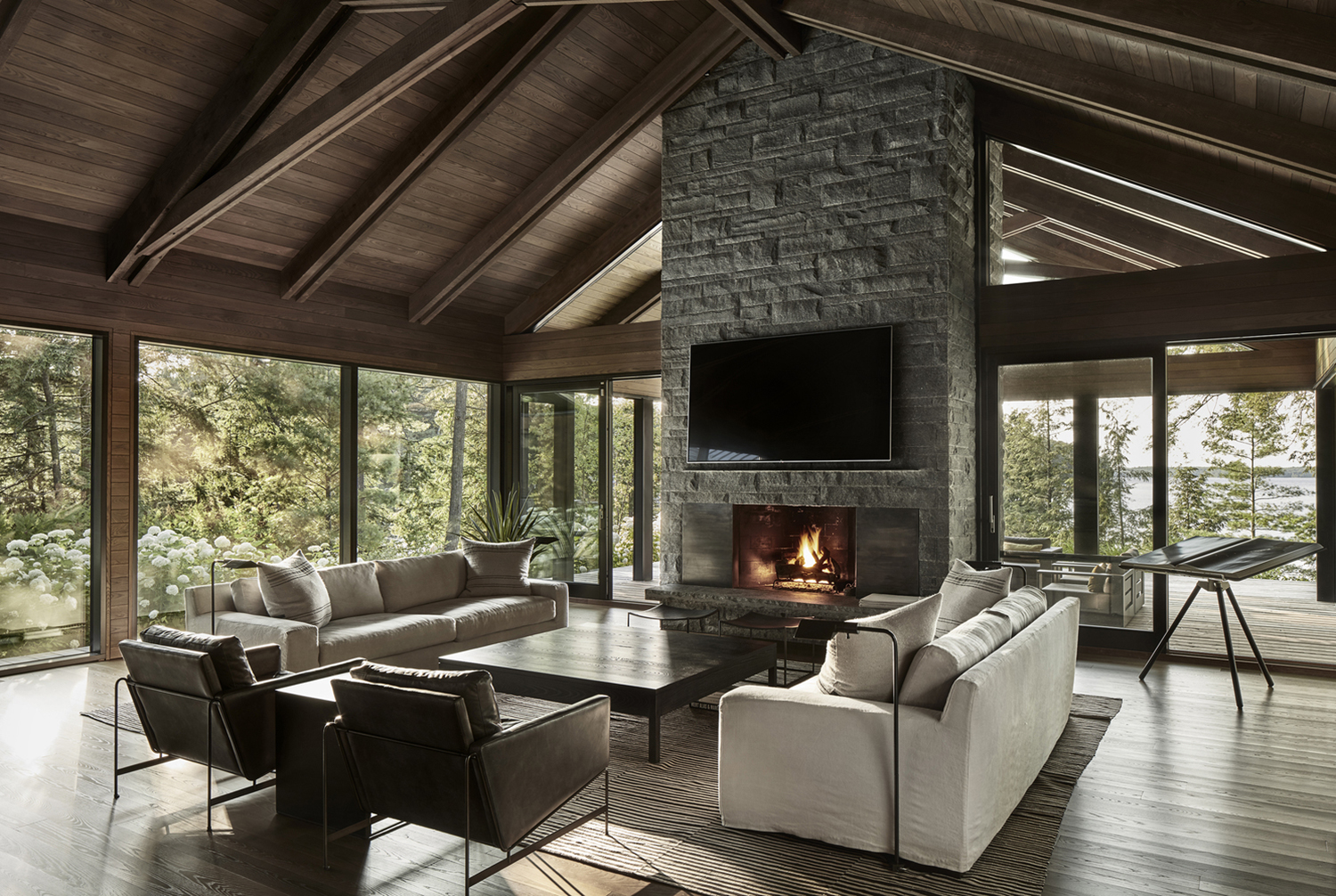 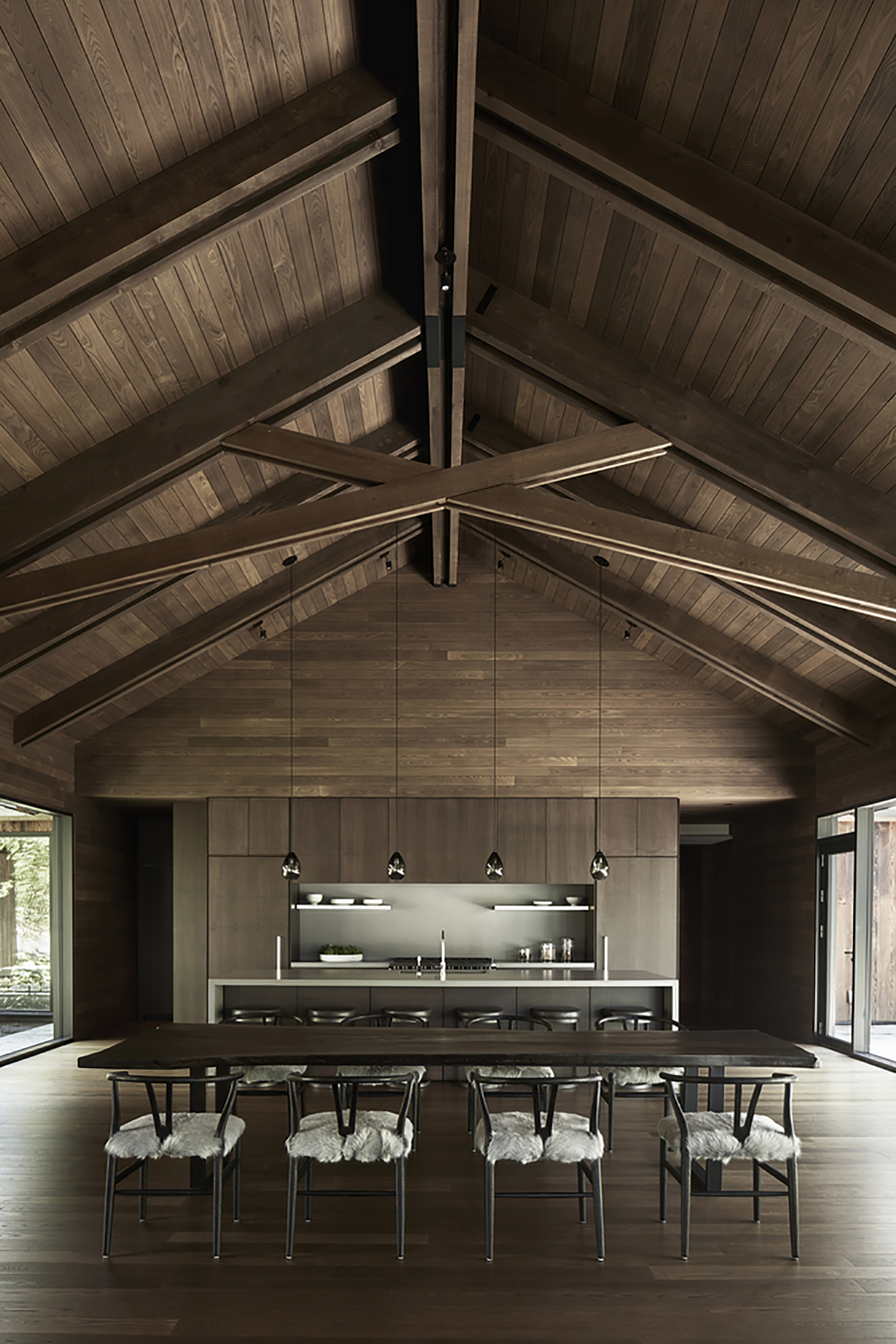 The sparse material and colour palette connects the units into a single whole, yet the separateness gives everyone a sense of privacy as well. The main (middle) unit includes the public areas including kitchen, dining and living spaces. The other two offer private spaces. One was designed for Renee and Ken with a bedroom, bathroom and an office. The other unit has two bedrooms, two bathrooms and a lounge. The boathouse adds yet more space on two levels: the water level with two boat slips and lounge areas, and the upper level with a small living room, two bedrooms and a bathroom. 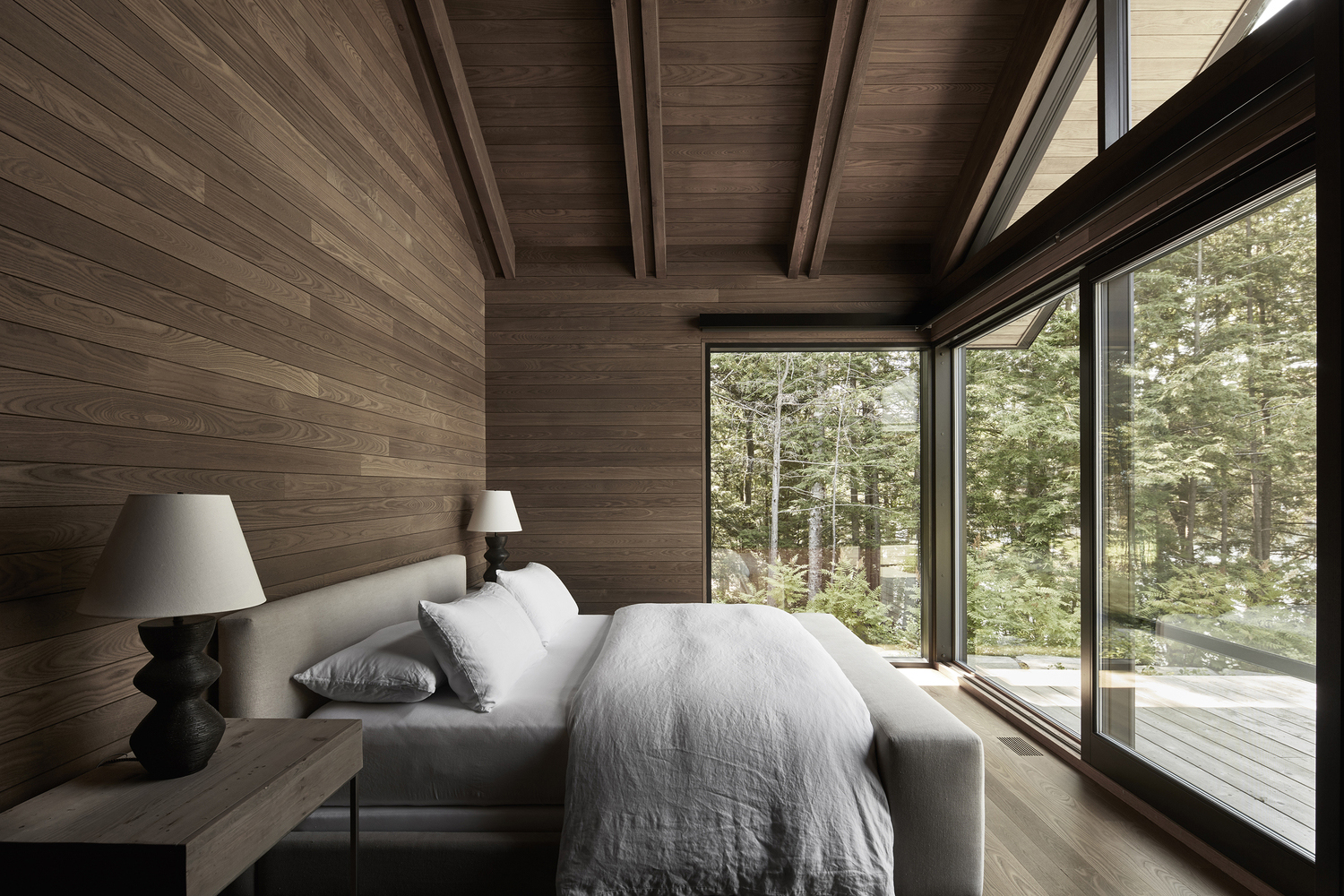 The units are anchored into the stone ridge and clad in semi-charred cedar. The corridors between the units have basalt stone floors with walls covered in torrefied ash, wood baked to achieve the deep brown colour. 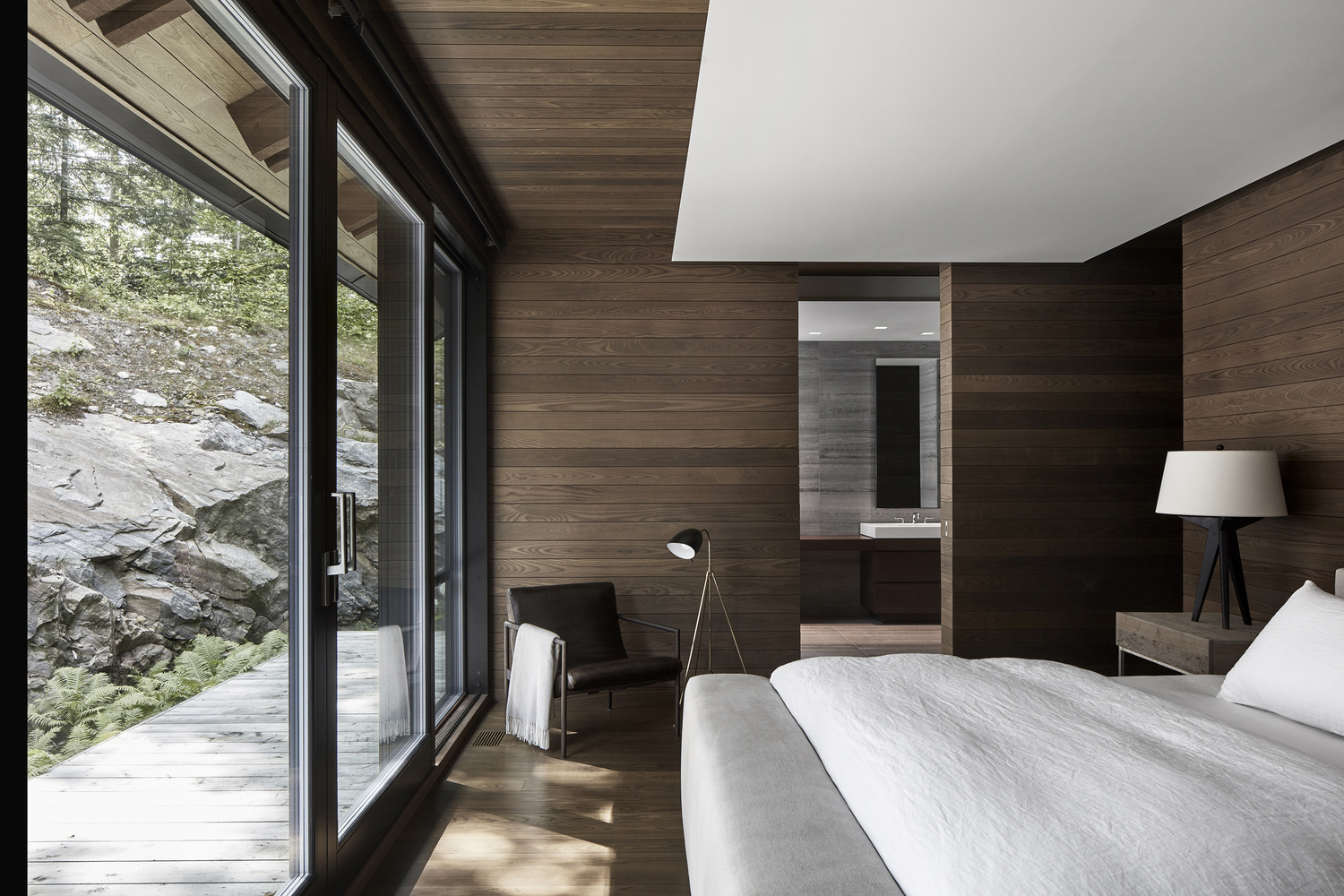 The cottage has become a year-round retreat and some of the family members only go to the city when they must. The tranquil boathouse, floating on the water, has become a beloved favourite for the entire family. 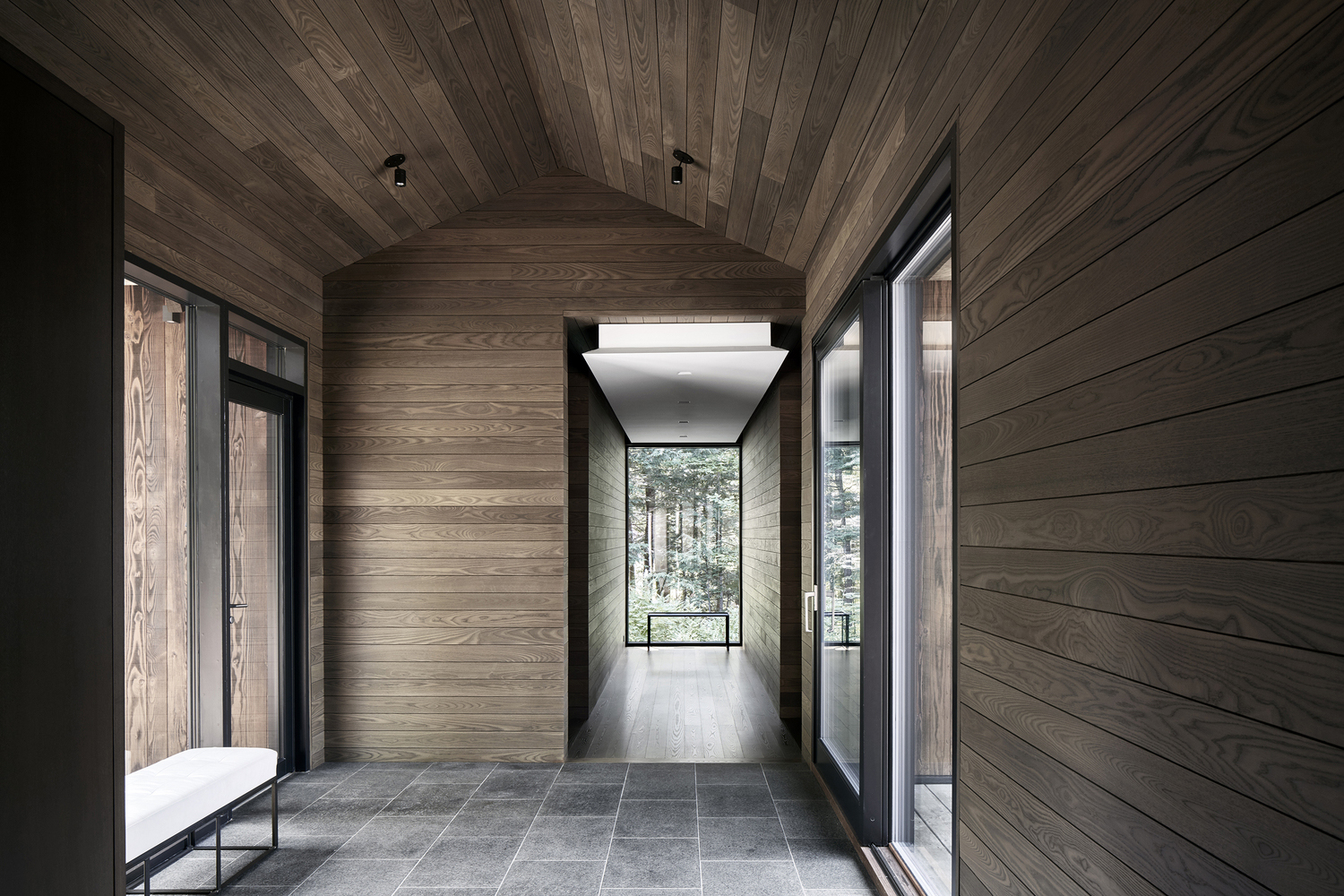 Lake Joseph is one of the three lakes in the Muskoka cottage-country, where expensive properties are mostly found. The other two are Lake Muskoka and Lake Rosseau. Celebrities from Steven Spielberg, Cindy Crawford and Tom Hanks to Mike Weir and Goldie Hahn have built retreats in the area. Tuija Seipell 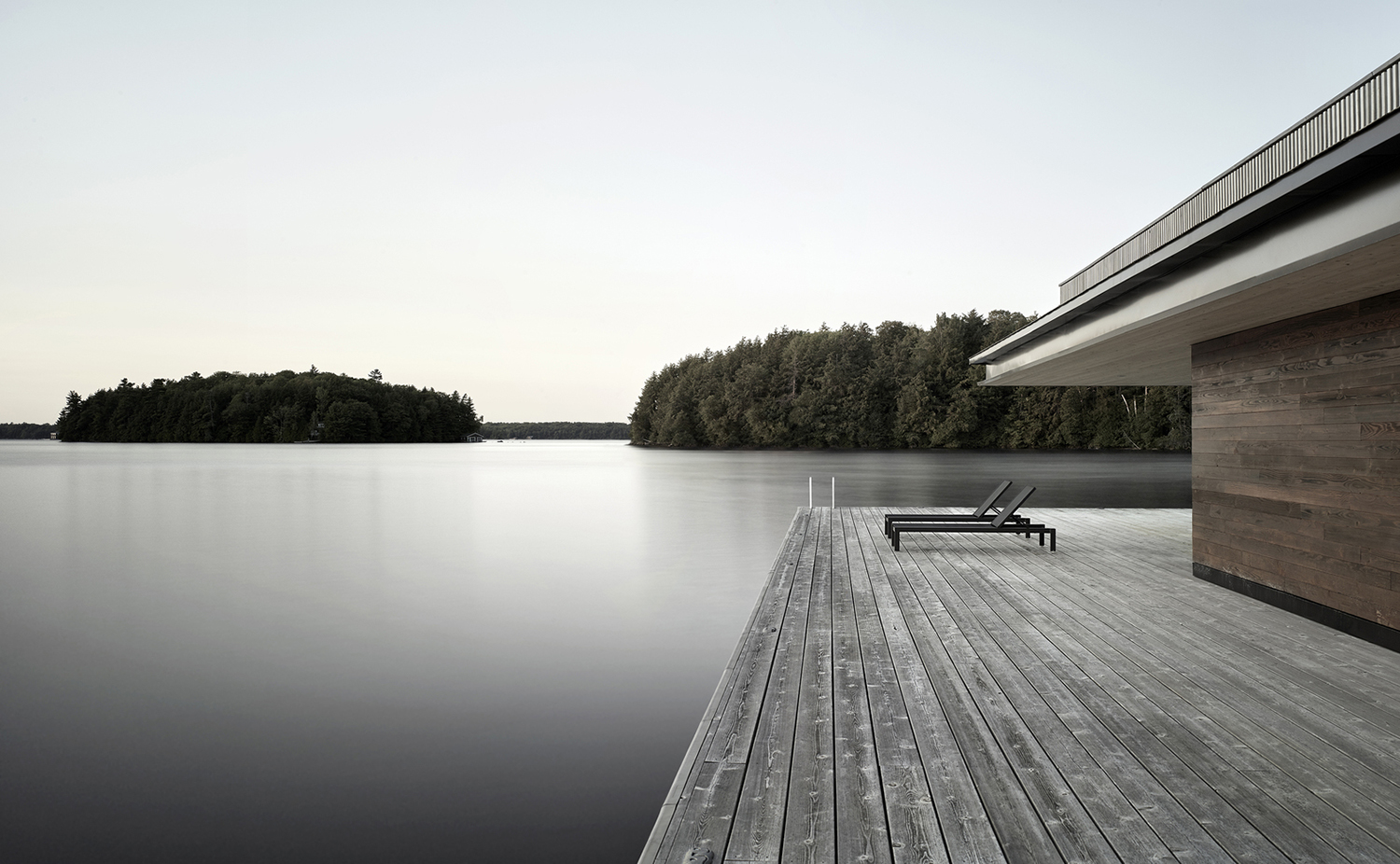