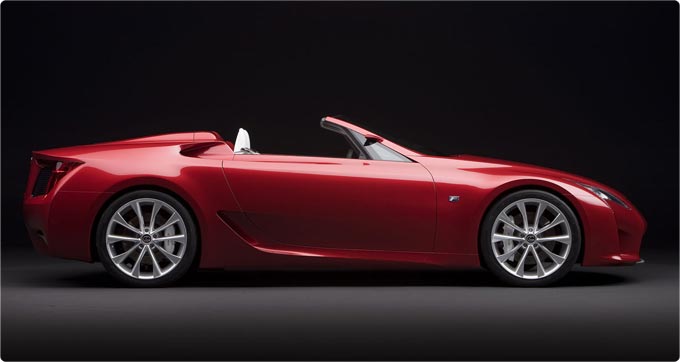 Many of the world’s automobile manufacturers use the North AmericanInternational Auto Show as a platform from which to unveil new designand new concepts in car design. This year’s exhibition just came toan end in Detroit, Michigan and we are happy to report there were atleast a few new designs that caught our eyes.
A series of concept cars comprise the Lexus LF, or ‘L-finesse’ line —and this year the Toyota Motor Corporation introduced the LF-A Roadster— a topless version of the previously revealed LF-A coupe. The LFseries represents a new direction in design for Lexus — centred aroundthe philosophy of intriguing elegance, incisive simplicity and seamlessanticipation.

The high performance topless roadster will be set to compete with someof the most desired vehicles on the roads today. At a glace, thelow-profile aerodynamic form is built from lightweight carbon fibre andaluminium, and a rear wing ascends automatically as a trigger speed isreached. While there is no official word yet about which type of topthe LF-A roadster will be fitted with, we’re expecting to see a fullyautomatic retractable hardtop as Lexus will want to keep itscompetitive edge. By Andrew J Wiener