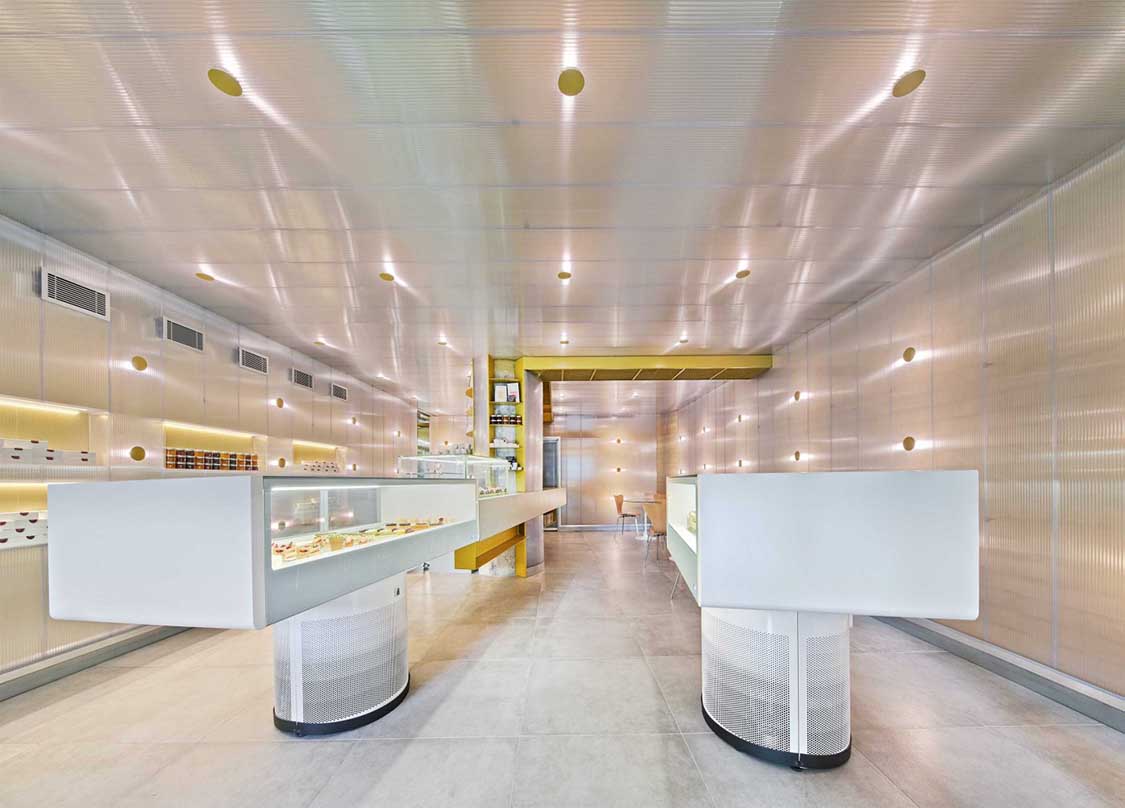 L’atelier is a new ‘pastry atelier’ in Barcelona. The initial premise of the founders, pastry veterans Ximena Pastor and Eric Ortuño, was to create a completely new pastry destination concept.

They envisioned an open and transparent space that would house a workshop/studio, a school, a bakery and a showcase/shop for their pastries. 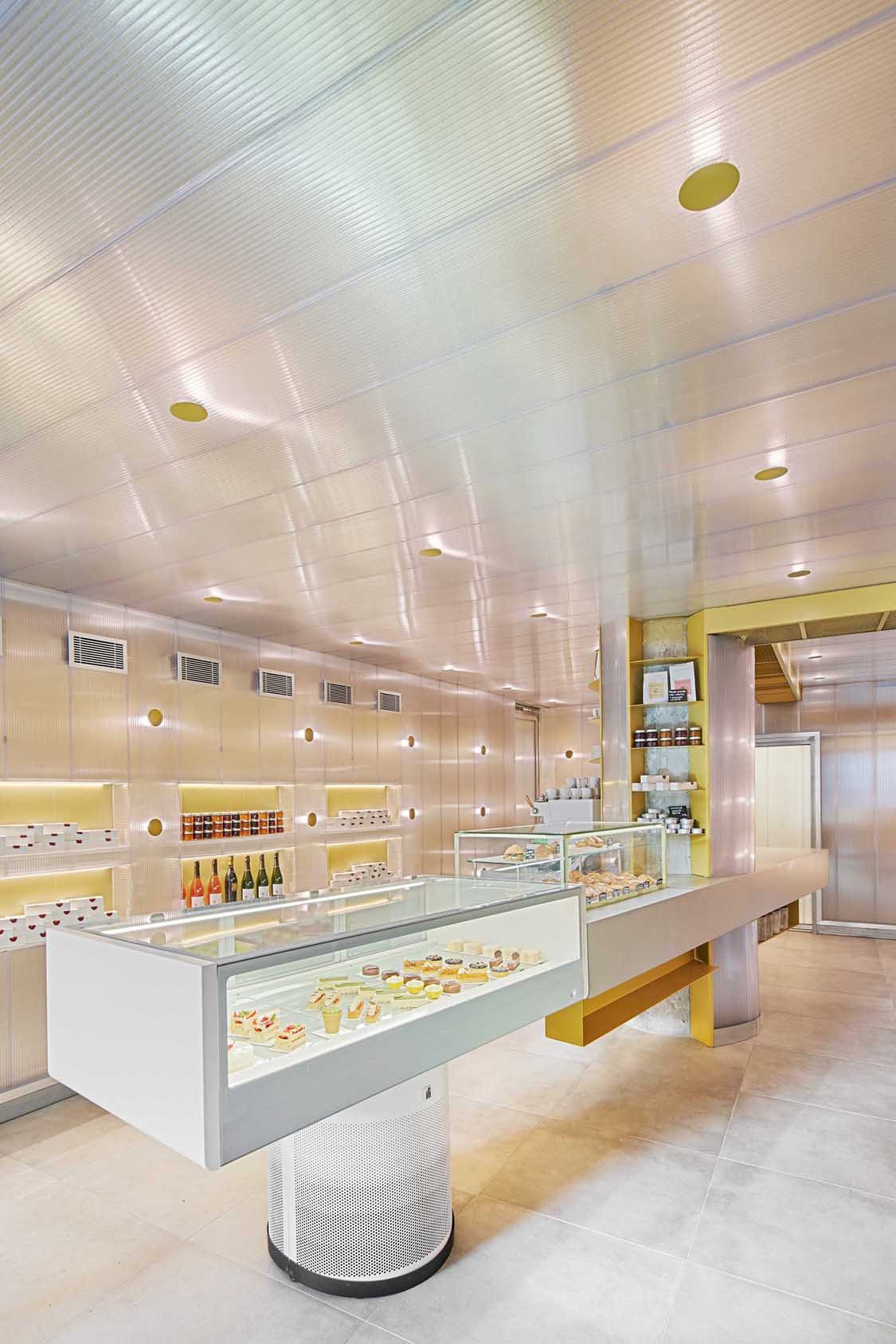 They engaged Barcelona-based Ideo Arcquitectura to transform a raw and empty 500 square-metre (5,381 sq.t) space in Barcelona’s Eixample neighbourhood into an “avant-garde, groundbreaking and unique” home for their new endeavour. 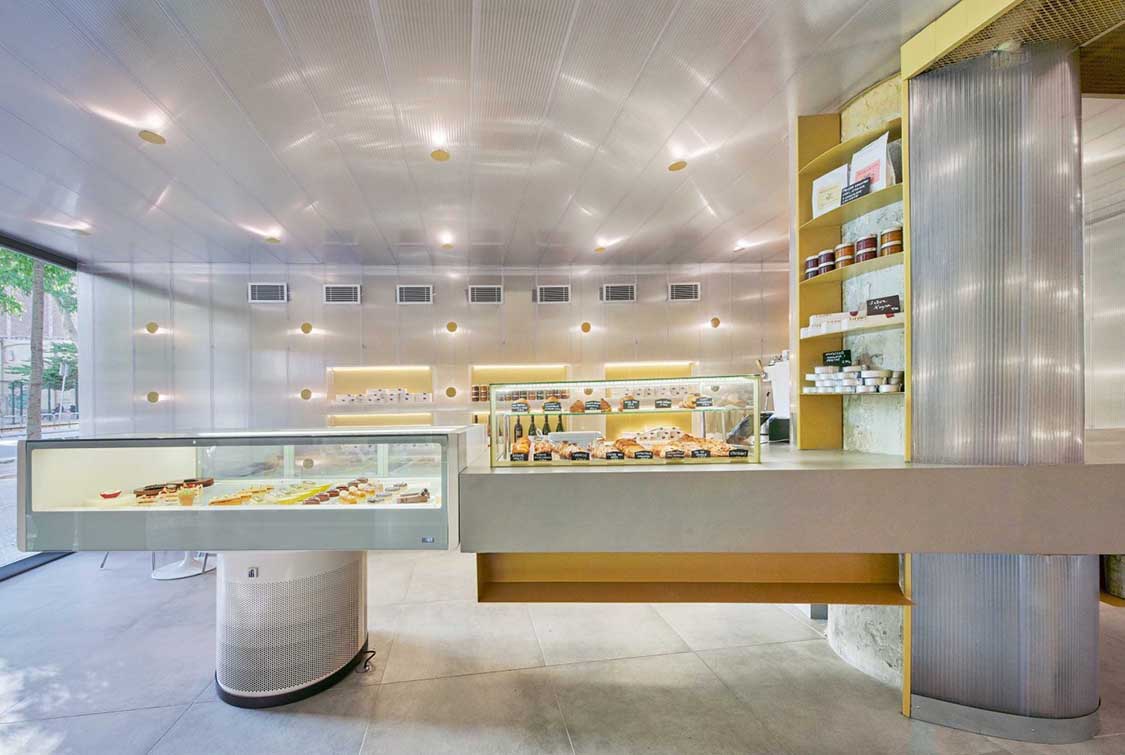 Combining these with a teaching area and the actual retail shop required stepping back from the detailed requirements and considering the fact that the shell, the actual premises, are indeed a backdrop to all of this creation and activity. 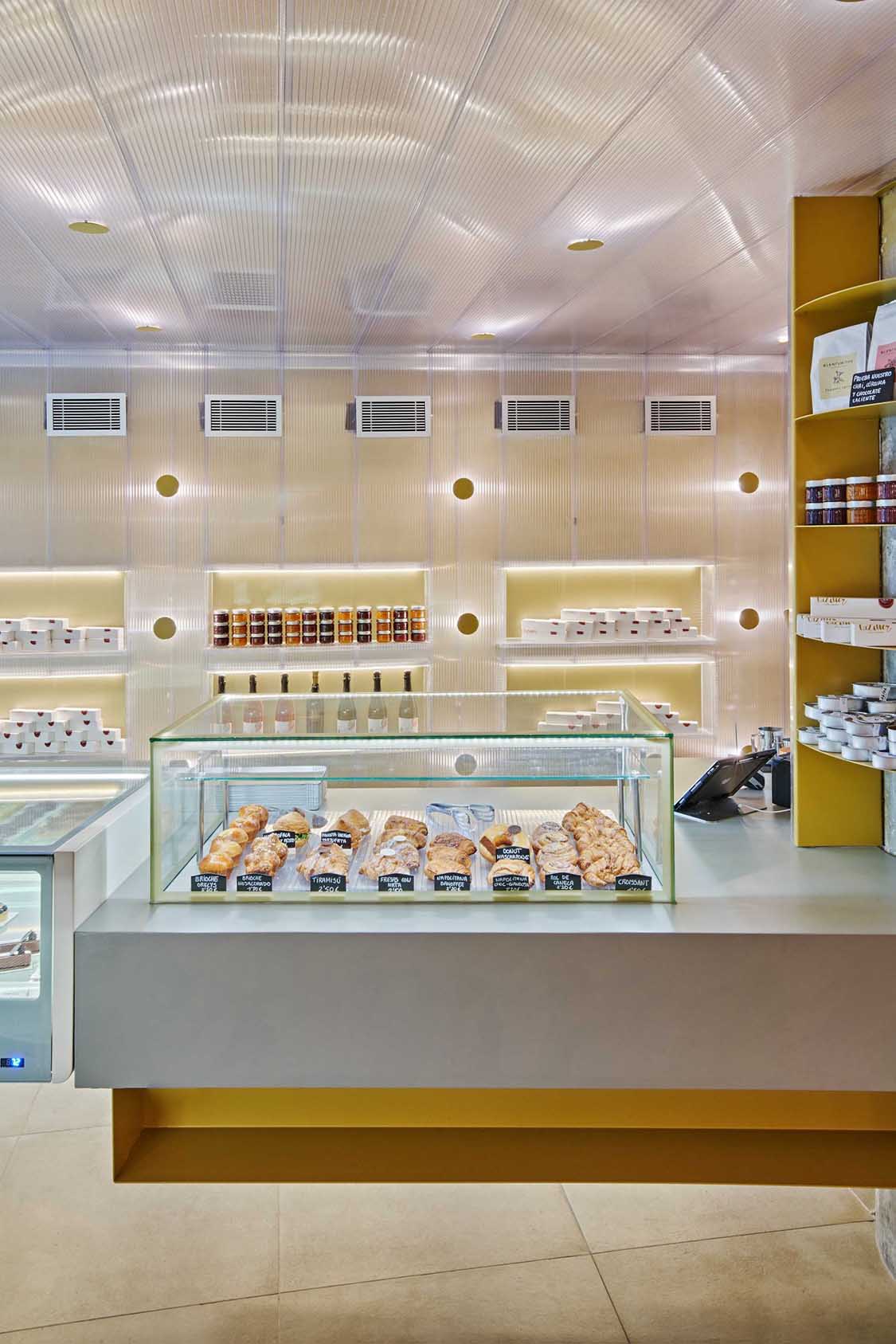 Del Barco’s team solved the dilemma in a smart and bold way by doing less, not more – something we will always value more than excess.

They left the raw concrete space with its air conditioning, wiring and other technical installations visible giving the atelier its modern and industrial workshop feel. 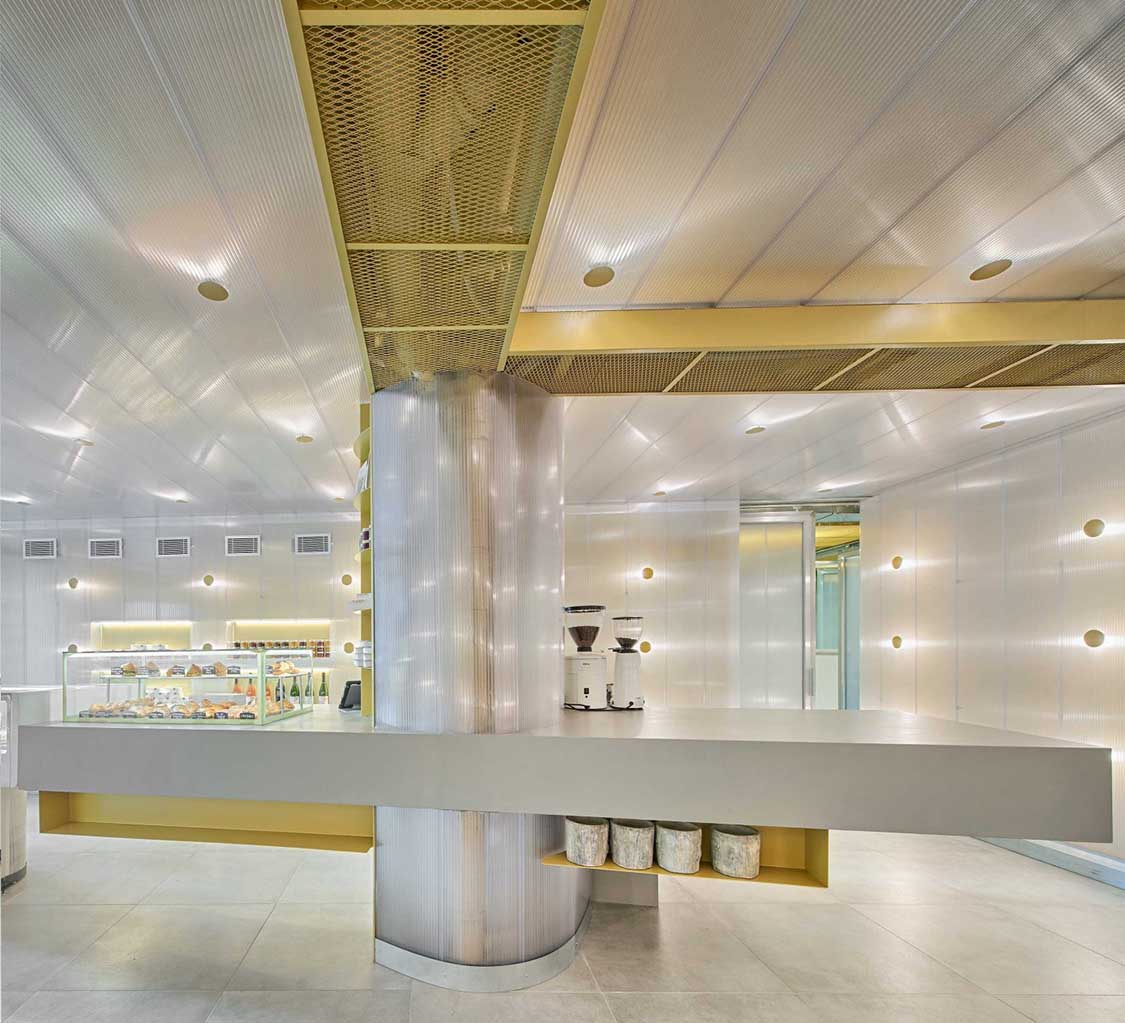 But they lined it all with a contrasting delicate inner layer of glass-like semi-transparent polycarbonate panels, set 20 centimetres from the walls, creating a fragile jewellery-case ambiance. The same material functions as partitions and dividers in the pastry school area.

The space is almost void of colour, except for a range of golds and Pantone 118 ochre with golden tints. Despite of the hard surfaces, and grey walls and metal grids in specific areas, the golden hue and the well-placed lighting evoke a sense of subdued, warm shimmer. 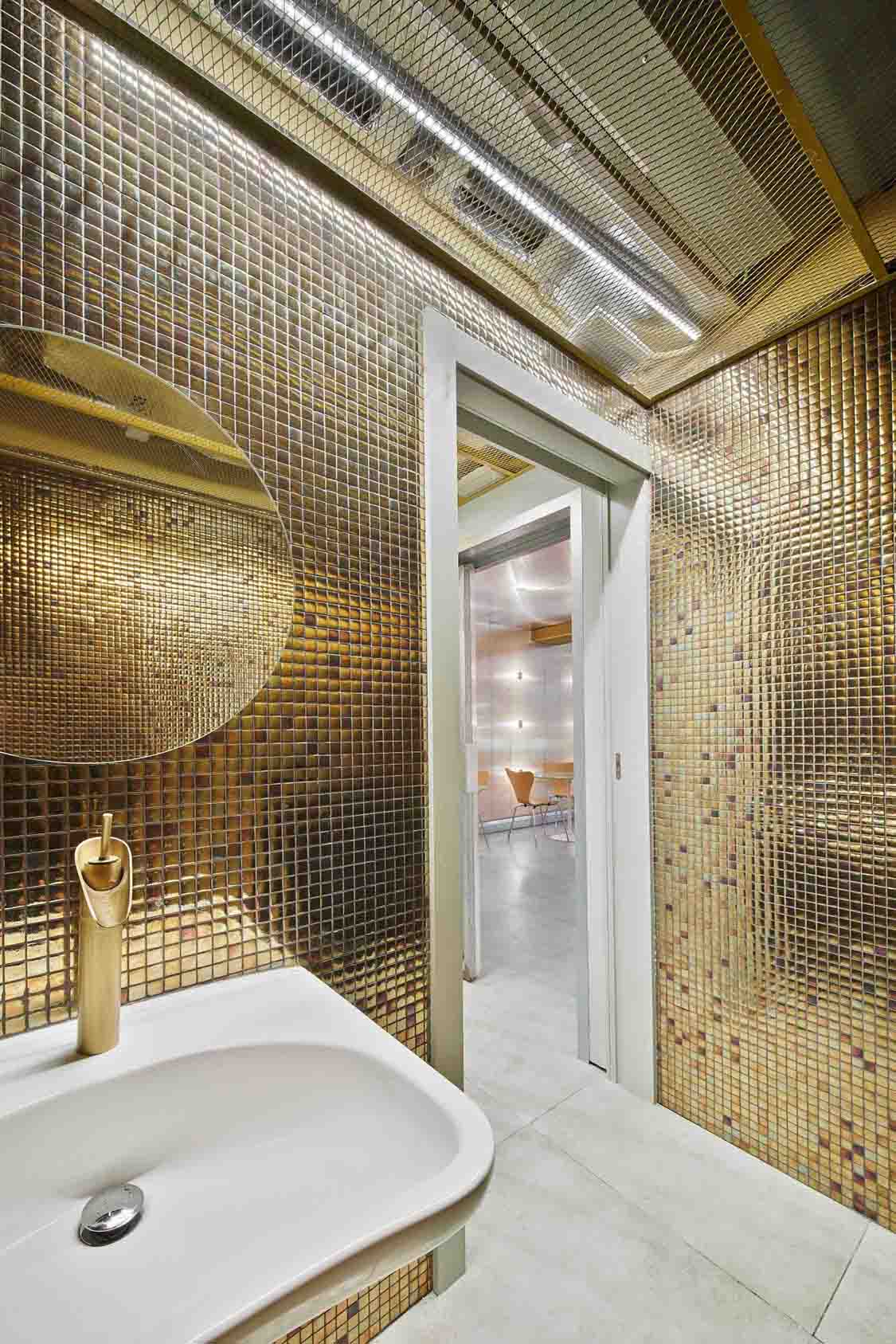 L’atelier Barcelona’s founding partner and director of activities Ximena Pastor started in the pastry field in 2007 in her native Costa Rica. She arrived in Spain in 2011 and has studied and worked in Michelin-starred restaurants and with several celebrity chefs, including Albert Adriᾴ.

L’atelier Barcelona’s second founding partner and director of training Eric Ortuño began his pastry career in 1986 studying under Jean François Arnaud and Yves Thuriès and working in several respected hotels and restaurants. From 2000 to 2018 he was the head of pastry studies at HOSTELERÍA Hofmann School of Barcelona.

Architect Virginia del Barco graduated at the Polytechnic University of Madrid in 2001 and founded IDEO architectura the following year.

Barcelona’s Eixample is an iconic residential district known for its distinctive strict grid layout, its several examples of Antoni Gaudi’s architecture – including the Sagrada Familia – and its great shopping and nighlife. Tuija Seipell.

The address of  L’atelier Barcelona: Calle Villadomat 140 b, Barcelona, Spain. 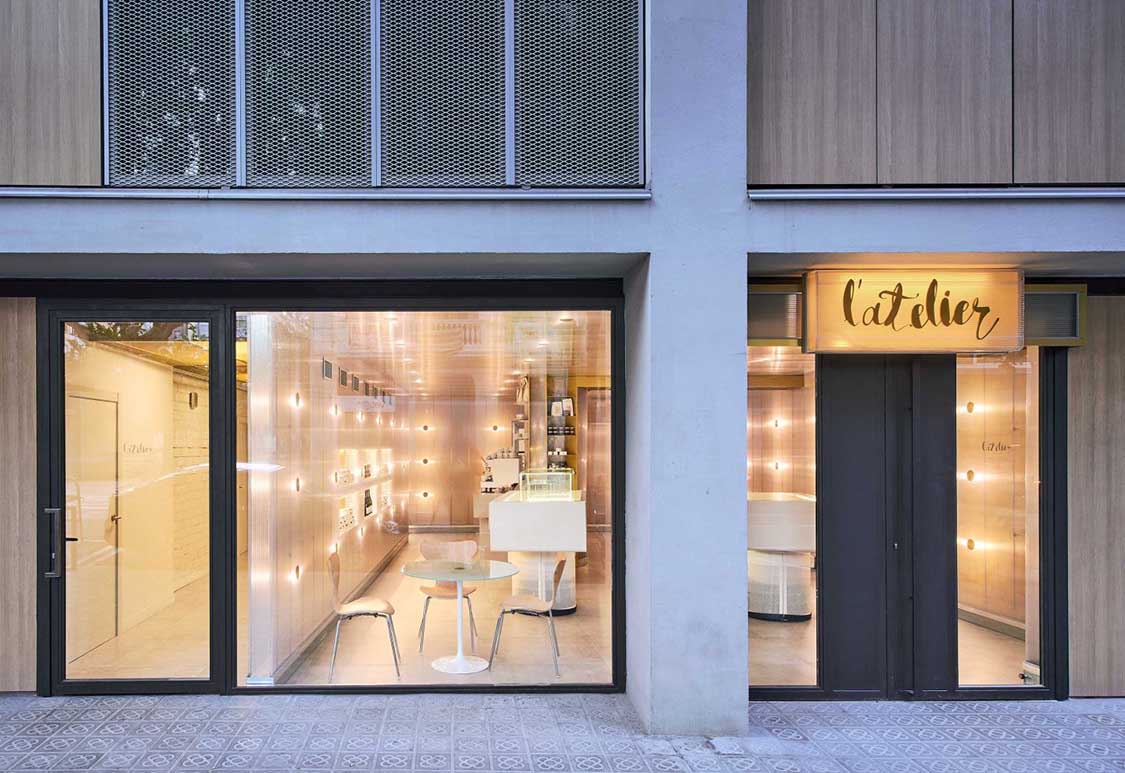 See also: The Rise of the designer bakery