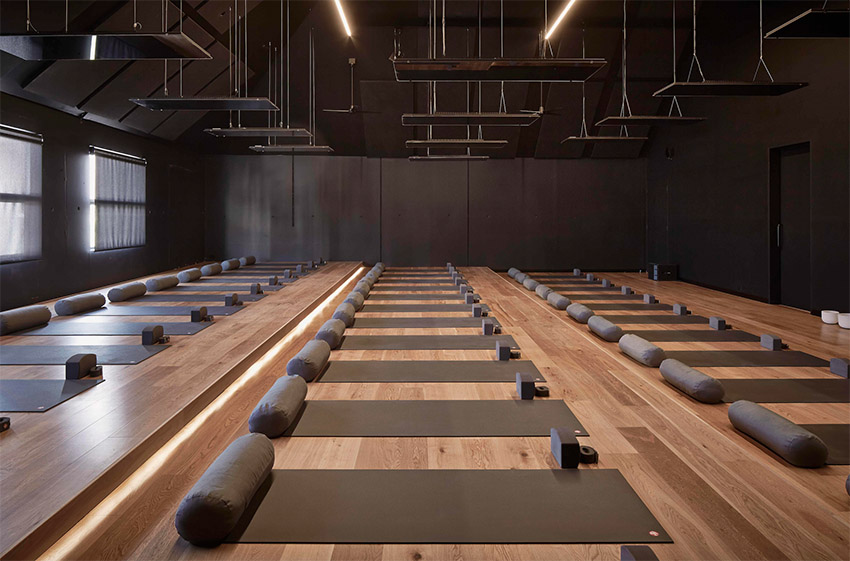 Humming puppy? That’s quite a kooky name for a luxe Melbourne yoga studio – the humming is a nod to the Arup audio engineer designed sound system that delivers an exquisite hum soundtrack around the yoga studio; the puppy is a nod to the ubiquitous downward dog yoga pose.
Clients leave a nondescript inner-city Prahran side street, climb a set of industrial stairs into the studio (known here as a shala) and enter a cocooned space where every detail of the design – custom lighting, soundtrack and interiors is geared towards preparing yogis physically and mentally for their practice. 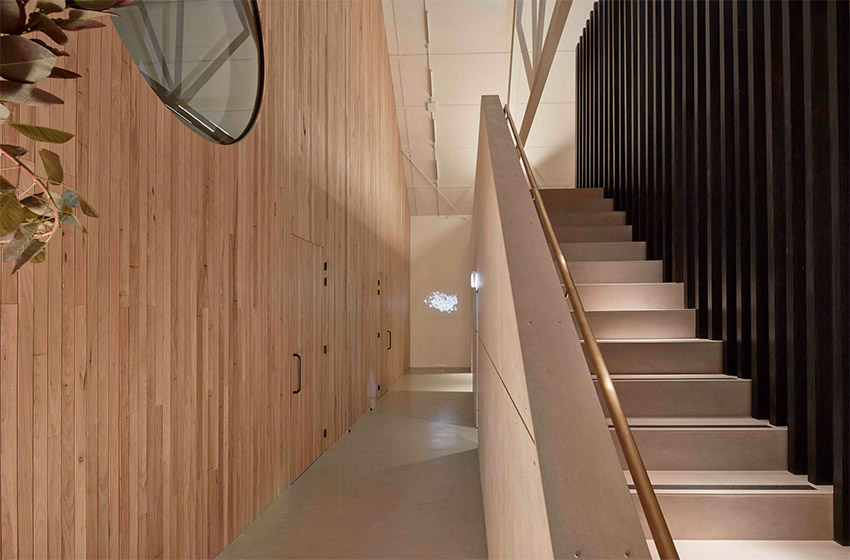 Co-founders Jackie Alexander and Chris Koch wanted to create a different yoga studio experience – part day spa pampering, part ‘get on that mat’ yoga practice and worked with architects (and yoga practitioners) Louisa Macleod and Karen Abernethy and ARUP to create a new kind of studio.
The studio space features Silvertop Ash shiplap interior cladding that gives it a minimalist barn feel. Walls have extra layers of soundproofing to genuinely cocoon clients from the outside world. The 380 square metres yoga studio (known as a shala) features three tiers of mats, accommodating up to 39 students per class, soaring 10-metre high ceilings and engineered oak floorboards. Clients can book specific sanitized mats online before classes. 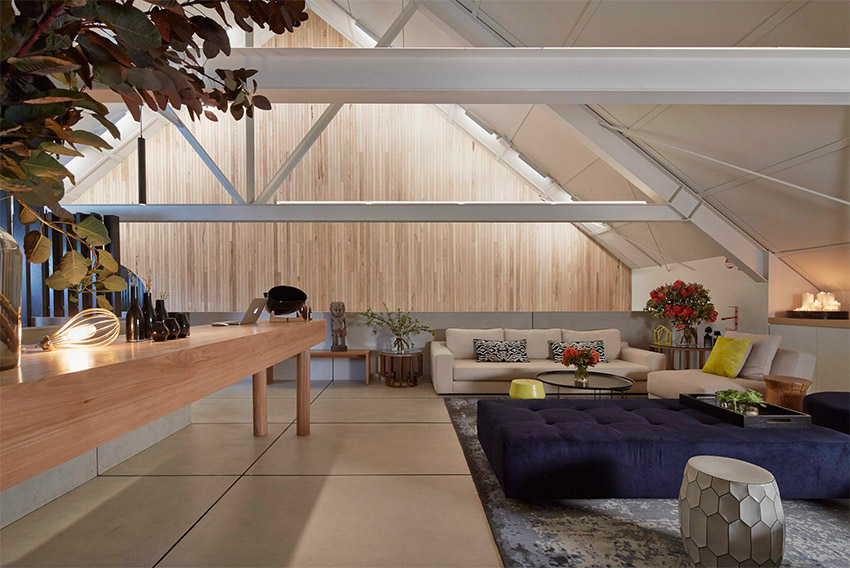 ‘Conceptually the preparation area (front of house) is intended as a ‘refuge’ – pure, simple and white with touches of timber,’ says Louisa. ‘Whereas the yoga practice space is intended as a ‘sublime’ space, a universe of its own complete with pure black walls and linings.’ The entire studio is sound proofed (well there is a pole dancing studio next door) and a Sonos system pipes in a specially commissioned soundtrack of soundwaves at 40hz – a frequency associated with ‘gamma’ brain wave activity and states of peak performance; it is meant to help people tune into the practice and not get distracted. Another layer of sound comes in the form of a 7.83hz, otherwise known as the Schumann Resonance that helps to ‘ground’ yogis during practice. Together they create an unmistakable hum that resonates throughout the classes. The shala is heated to exactly 27 degrees by a series of radiant heat panels too so it is all rather idyllic for yoga practitioners. 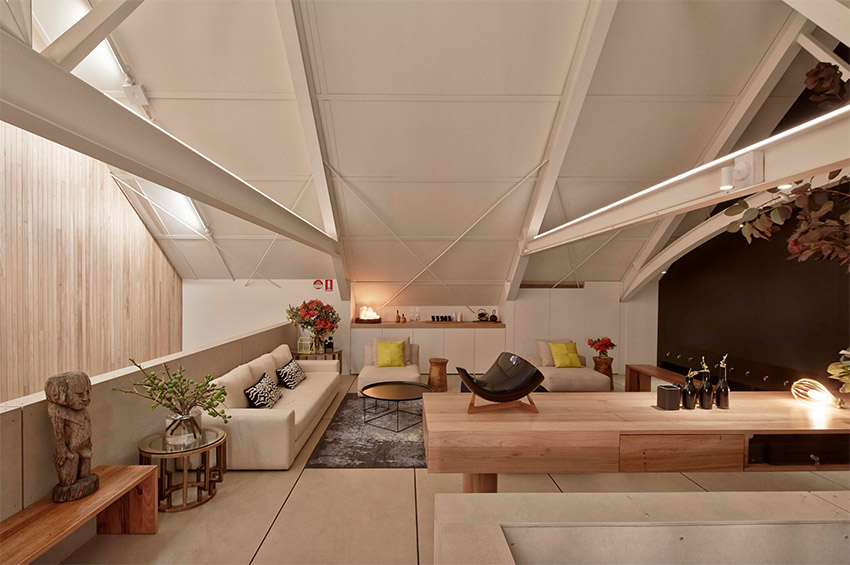 Clients can just turn up in their yoga gear – all props such as mat, belts, blocks, shower/workout towels and meditation cushions are supplied. Bathrooms offer five-star standards – fresh towels, toiletries, hair straighteners, driers even lockers with phone charging capability.
Amenities aside, real innovation here is the ingenious soundtrack. Co-founder Koch (an IT entrepreneur who created successful startup 1Form) had a ‘lightbulb moment’ to add the gamma soundtrack to classes to stop people getting too distracted during their poses and tune into their practice. Humming Puppy also does the ‘afterclass’; offering chilled coconut water and warm green tea. Humming Puppy seems to have found a happy balance between luxury and simplicity. Says Louisa: ‘Luxury can be attributed to the generosity of space. This balance is maintained by a simple and raw material selection combined with fine detailing in the construction and the touches of more fine materials (brass etc.) in some of the fittings.’ 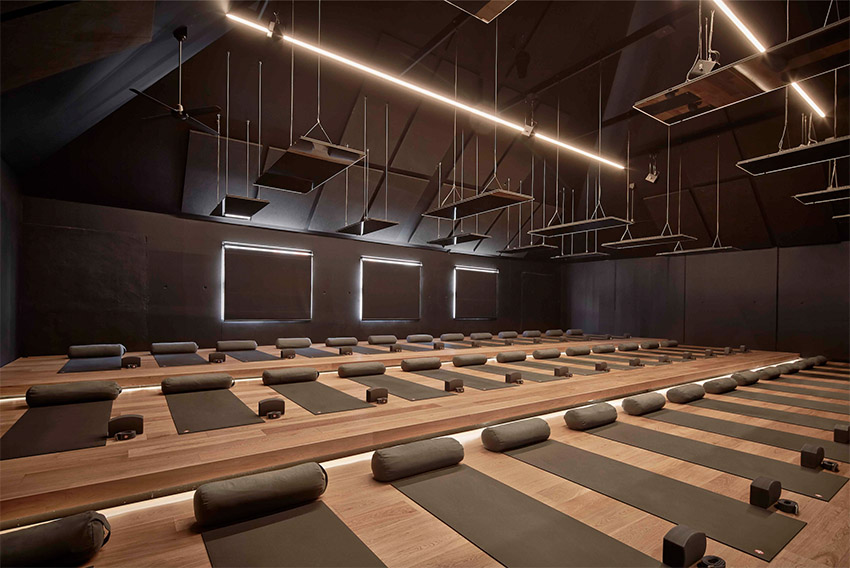 For co-owner Jackie, the afterclass experience is key. ‘We wanted a place where people could hang out,’ says Jackie. ‘We felt what was lacking in a lot of yoga studios.’ There is a clear advantage in the architects genuinely understanding the end-users’ needs. Says Louisa: ‘The fact that we both practice yoga and have done so in many places all over the world definitely informed the design process as we know how a good yoga studio should function. We are aware of the rituals and how the spaces should flow.’ – Emily Ross. 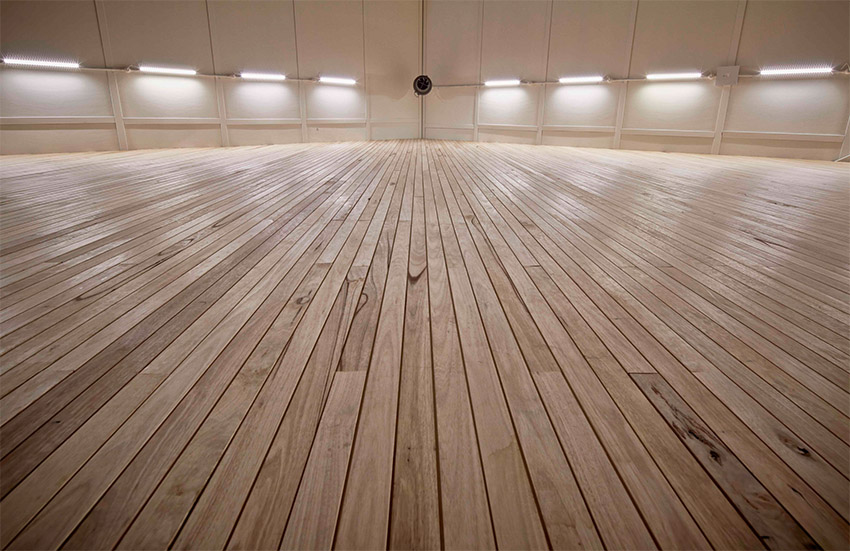