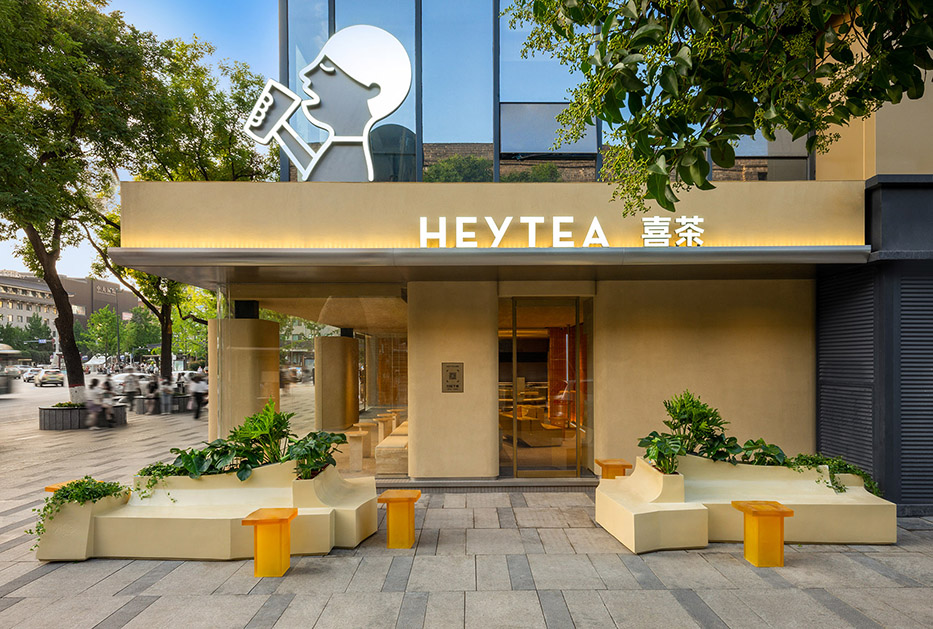 Located near the ancient Xi’an City Wall’s Yongning (South) Gate in Xi’an, the new HEYTEA café is aiming to connect the past with the present. This is nothing new as pretty much every café project coming out of China right now reveals similar aspirations. Designers trip over themselves talking about emerging lifestyles and historical metaphors, experiential spaces and digital highlights. 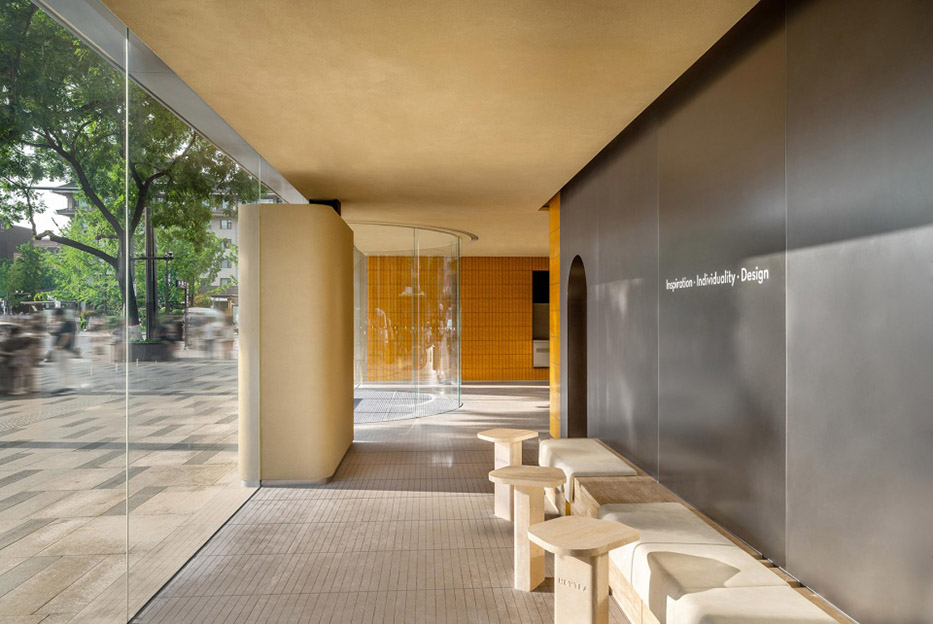 But straddling both the respected, ancient history of the Chinese cities and the demands of the young urban consumer culture is not an easy task. Separate from the cacophony of hype and the lifestyle-aware customers’ need to be seen in the right paces with the right people, customers are there to enjoy the drinks and the company of their friends. 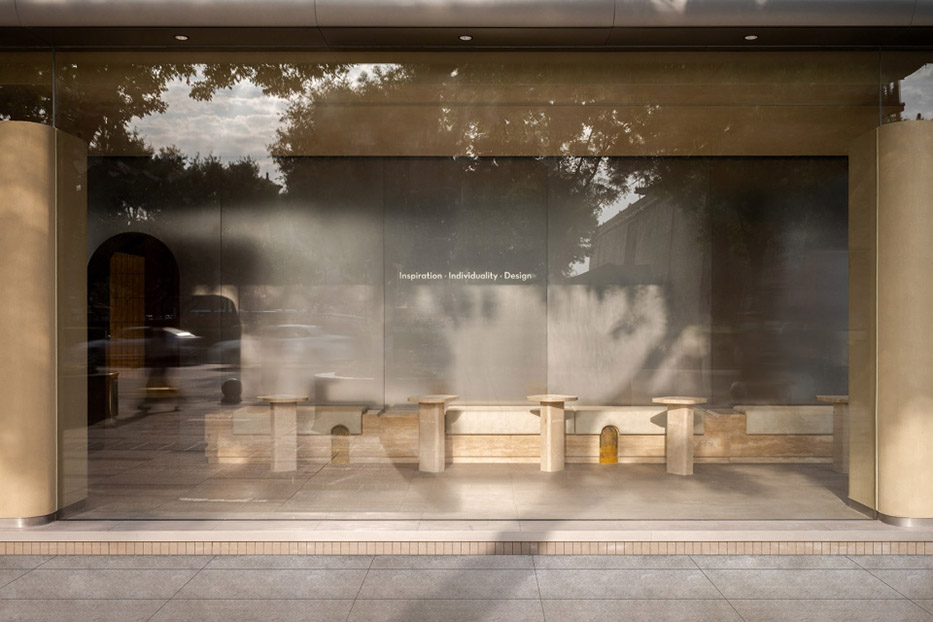 Taking into account all of these demands and objectives, the designers of this tea store, Leaping Creative, have created an elegantly modern milieu in a challenging location where a contemporary shop could easily become dwarfed by the presence of the massive, ancient wall and gate just across the street. 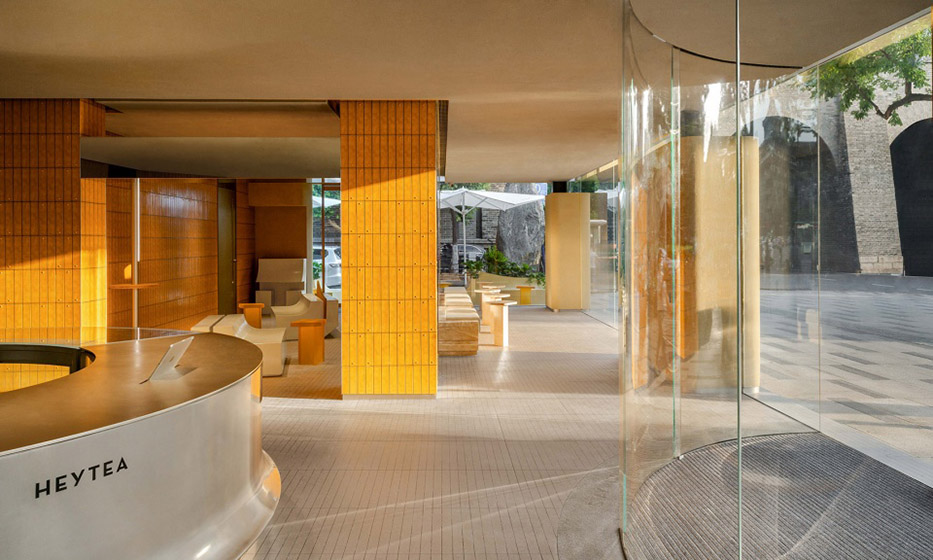 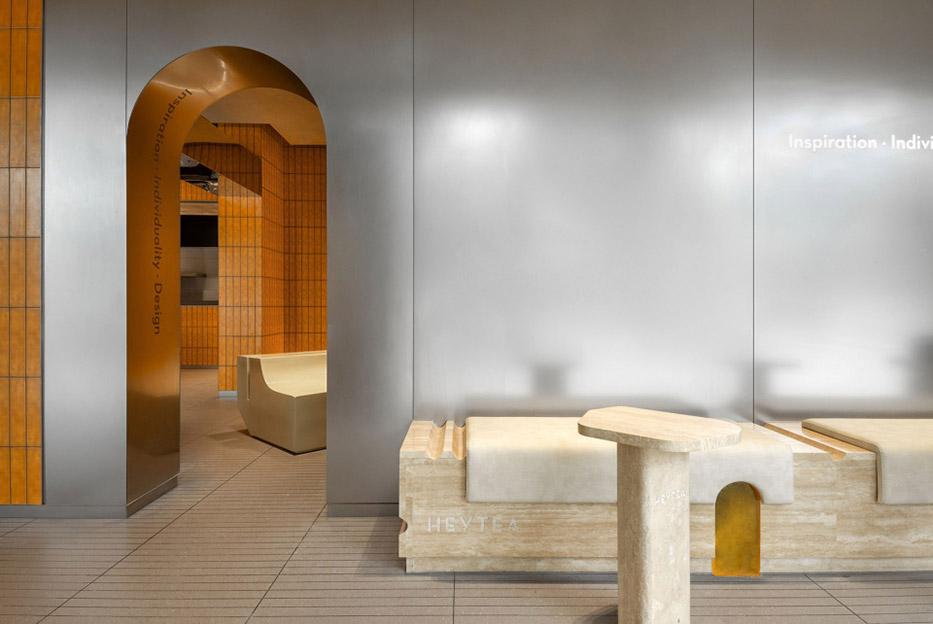 The use of the locally typical yellowish sandstone hue in the décor and embellishing it with bright yellow and silver tones is a smart combination. Glass, steel and tile dominate as wall and partition materials, while yellow resin and weathered cave stone were used to create the irregular-shaped, customized furnishings. The arched doorways echo the ancient wall and gates, but the glass front of the store creates an inviting openness that connects rather than separates. 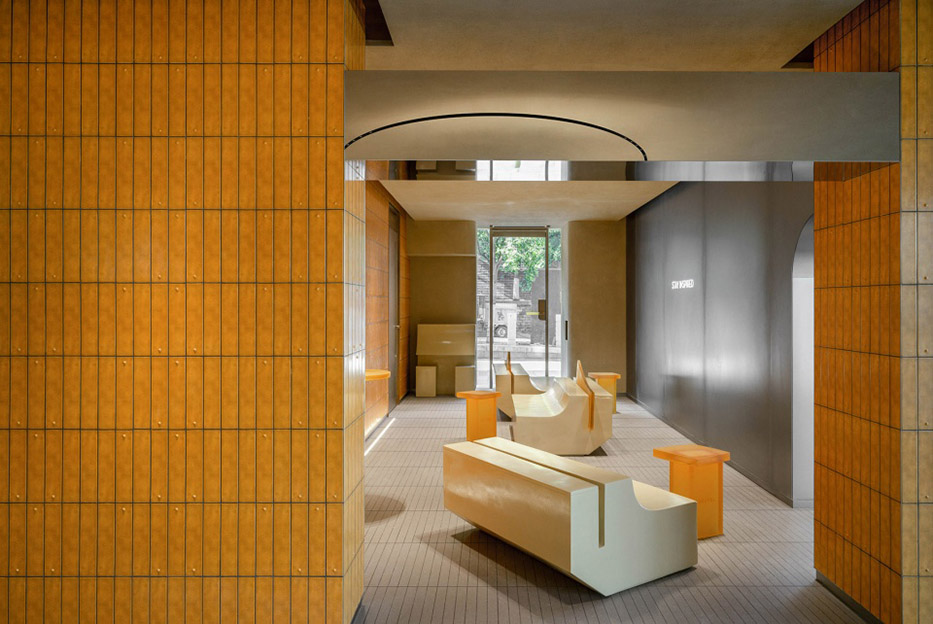 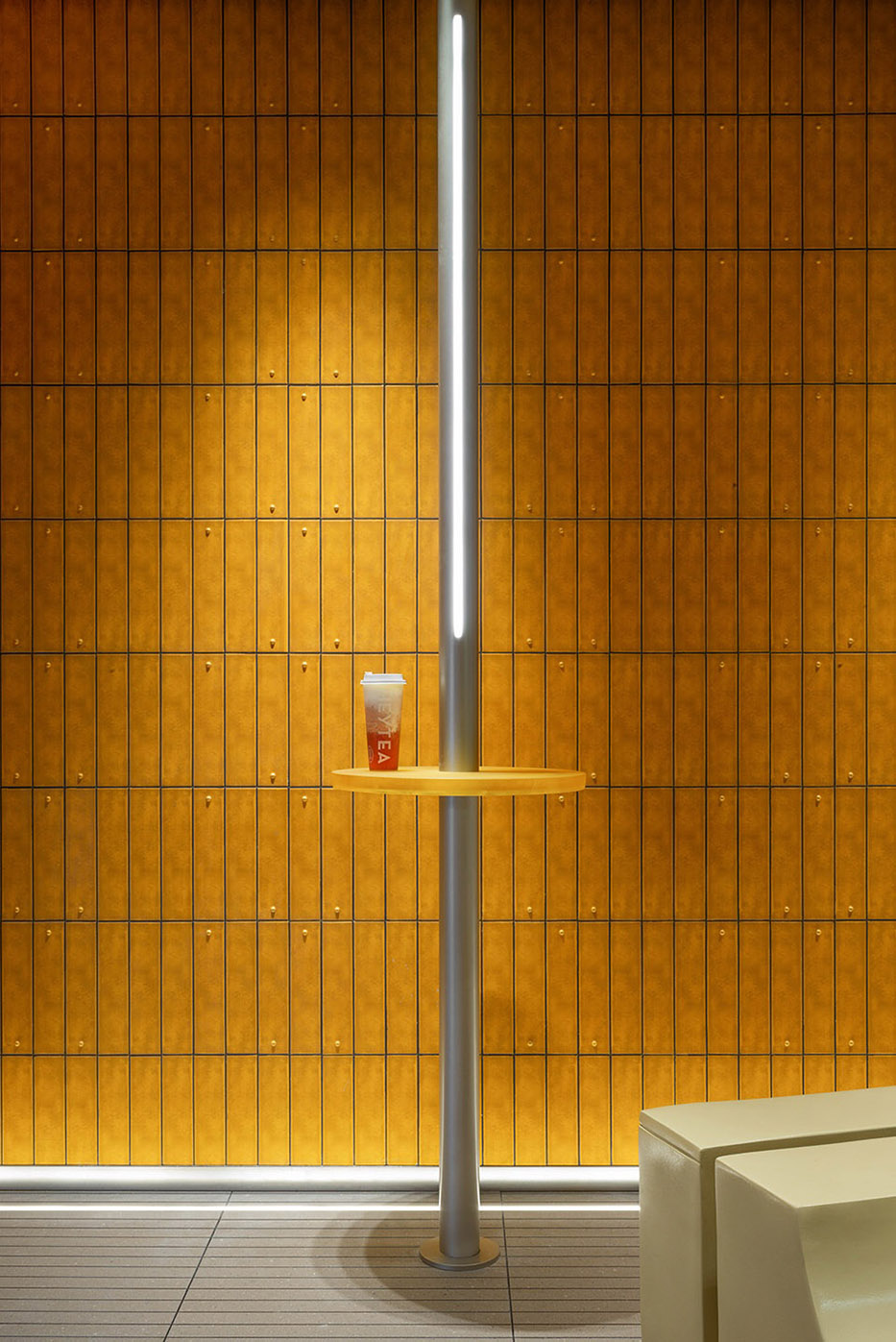 HEYTEA’s first store was a tiny café in Jiangmen, Guagngdong province. The company, initially named Royal Tea, was established in 2012 by the then-20-year-old Yunchen Nie. His idea of creating a Starbucks-style, upscale tea phenomenon really took off in 2017 when the newly named HAYTEA became a hot social media brand. His initial tea invention, the cheese tea, is still a core product in the brand’s more than 250 stores all across China. 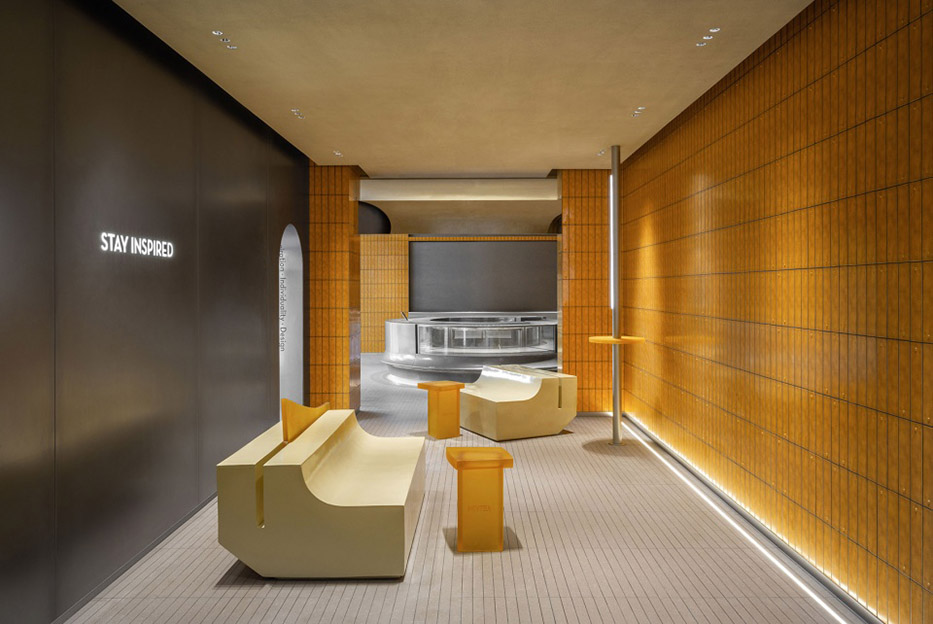 Since 2018, HAYTEA has become known also as a brand that pushes the store design category by using different designers for its stores allowing them to create a distinctively different image for each. Tuija Seipell 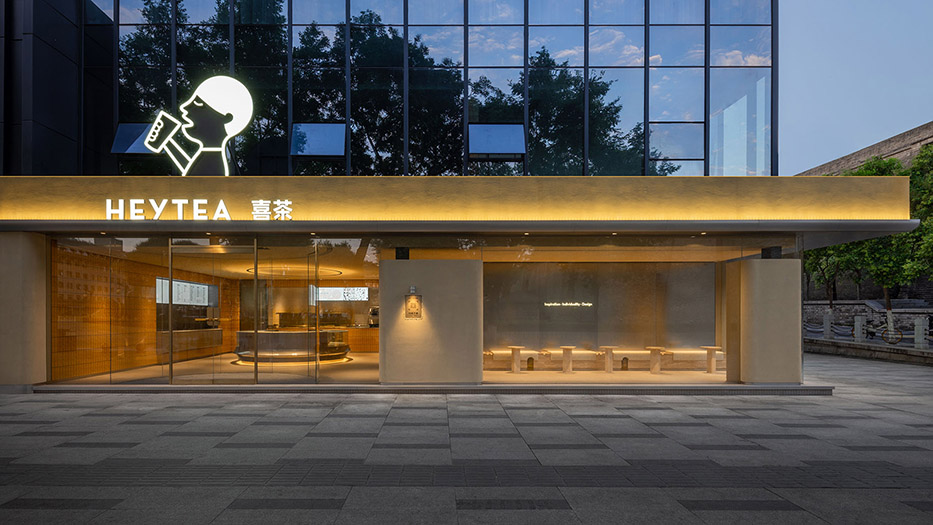