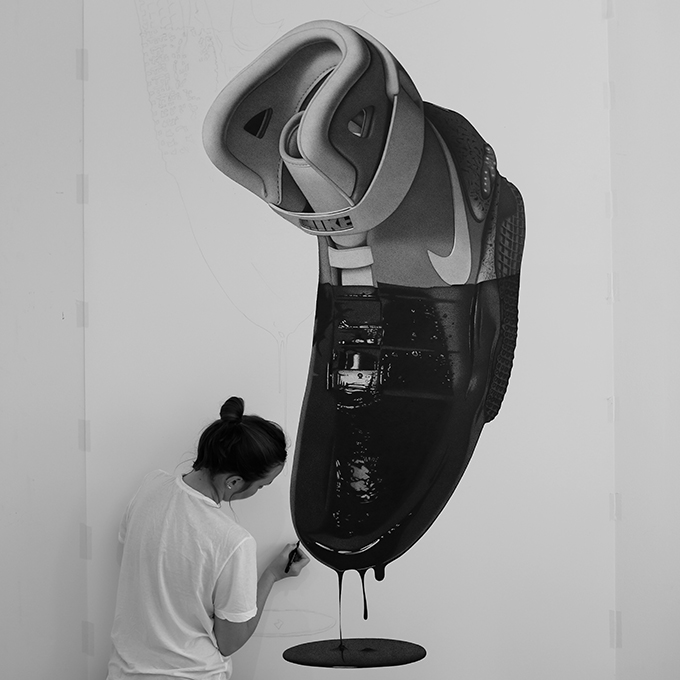 To take people on a completely new journey while doing what you have come to be admired for is a creative’s dream. The latest piece by New York-based artist CJ Hendry is an epic example of just that.

She’s bought a pair of Nike AirMags for $9,000, dipped them in black paint, photographed them and then hand-drawn a massive nine-foot black-and white piece of it. She’ll auction it off in Miami at Scope Art Fair and with 100% of the profits she and The Cool Hunter are purchasing shoes for children in New York.
Yes it’s still thousands of scribbles on a page, yes it’s a hand-drawn enlargement of a high-end fashion item, and yes it’s the same flawless attention to detail that we’d associate with CJ’s work. Yet within this piece there are many cool firsts we haven’t seen before.
For instance, CJ has never produced a piece that illustrates movement like this. As the paint drips off the shoes and pools at the bottom of the image, it evokes images of much greater issues. In many ways it mimics an oil spill tarnishing an irreplaceable commodity. 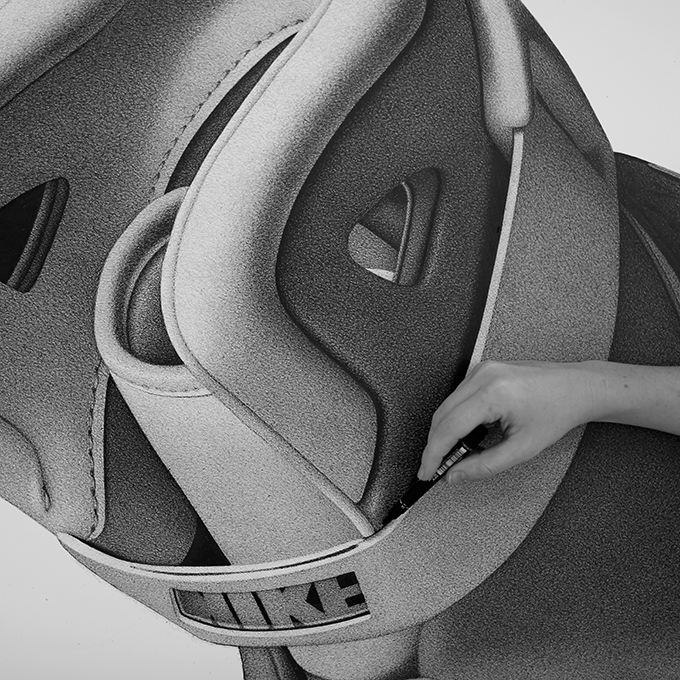 Also worth reflection was the outrage of some sneaker fanatics when rumors of CJ dipping the Nike AirMags in a bucket of black paint surfaced on social media.

Such a reaction is true to the time we live in, when sneaker culture and being a sneakerhead is no longer a hobby but a near-religion. To sneakerheads their collection of shoes is their holy book and each piece is like a part of scripture. When you consider CJ’s bold statement in this light, it was essentially the ultimate act of blasphemy. Sneakerheads, movie fanatics and fashionistas alike have dreamt for thirty years of owning these shoes, ever since 1985 when Michael J. Fox took us back to a future that we now live in.

Not everybody can own a pair of AirMags though, even if you did have a lazy $9,000 laying around. With only 1500 pairs ever made, finding your size and a seller is a near-impossible task. This makes destroying them seem even more like the ultimate act of insanity.

But as controversial as this piece may be, there is an equal amount of generosity attached to it. CJ and The Cool Hunter will be donating 100% of the profits to charity in the form of sneakers to those less fortunate than ourselves. Instantly, this work goes from being far more than just an outrageous conversation piece.

Instead, it inspires discussion on important and socially challenging questions and at the time, attempts to do something that helps. Would you have dipped the shoes in paint? How much do material items really mean to you? At what price would you destroy something so rare and cherished? And most importantly, would you destroy that item if it meant you could be helping many people far less fortunate than yourself? 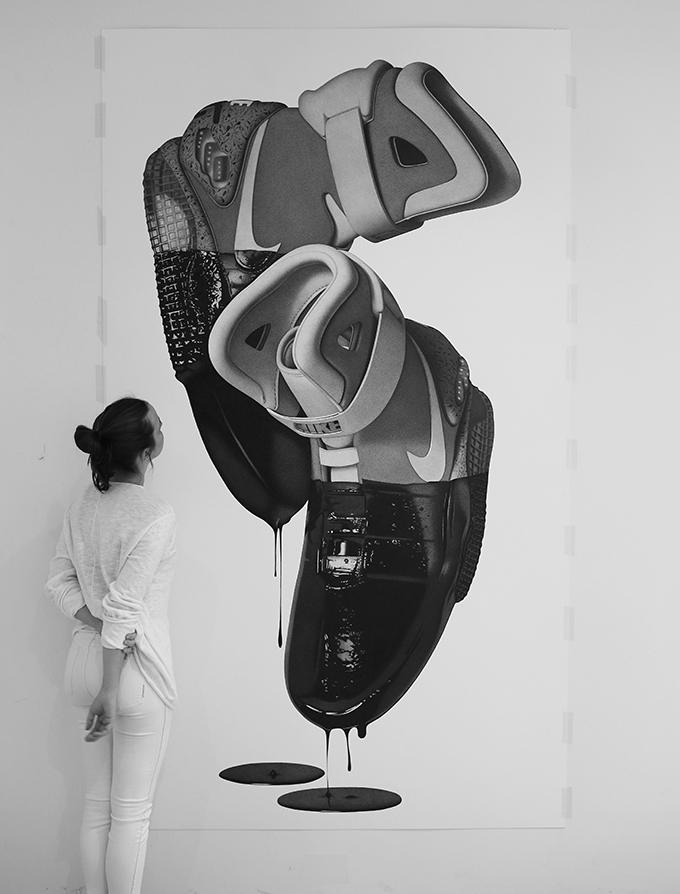 In essence CJ has taken an expensive, highly valued and sought-after item, devalued it and then transformed it into a valuable commodity – much-needed footwear – to help those who are less fortunate.

There’s no affiliation with Nike, the shoes are very real and the possibilities as to how many people can be helped rely squarely on how much someone is willing to pay for this career-defining piece when it goes up for auction at her upcoming Miami show.
They say you can’t understand a person’s journey until you’ve walked a thousand miles in their shoes. This transformation of Nike AirMags is an attempt to help in that understanding.

CJ Hendry’s show in Miami was extremely successful with the Half-dipped Nike Air Mags selling for US$130,000. She is now busy turning the funds into thousands of pairs of sneakers for needy kids in New York. 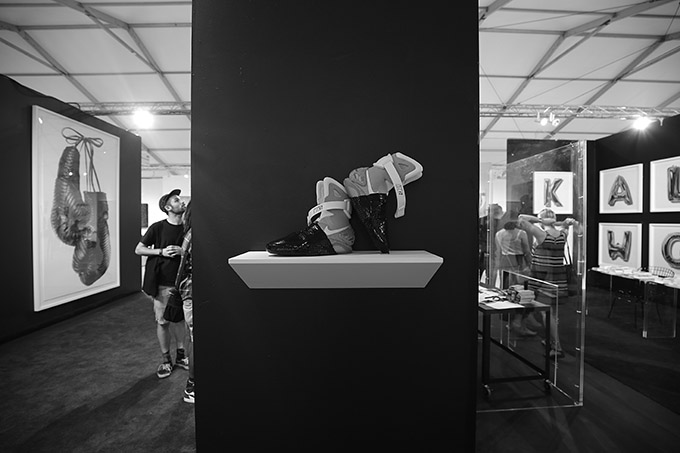 The rest of the show was a huge success as well with CJ drawing her distinctive art in a transparent booth. This drew enormous crowds as most people thought the pieces were black-and-white photographs, not hand-drawn one-of-a kind works. 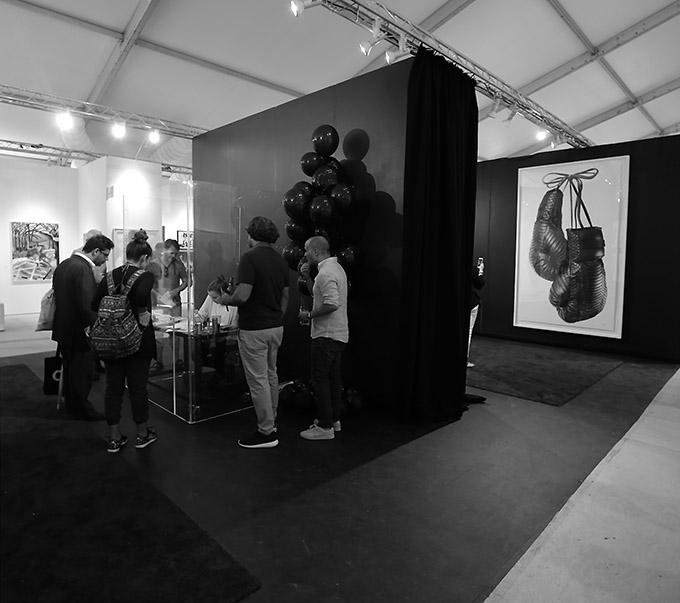 Several private commissions were ordered with more orders coming in after the show. 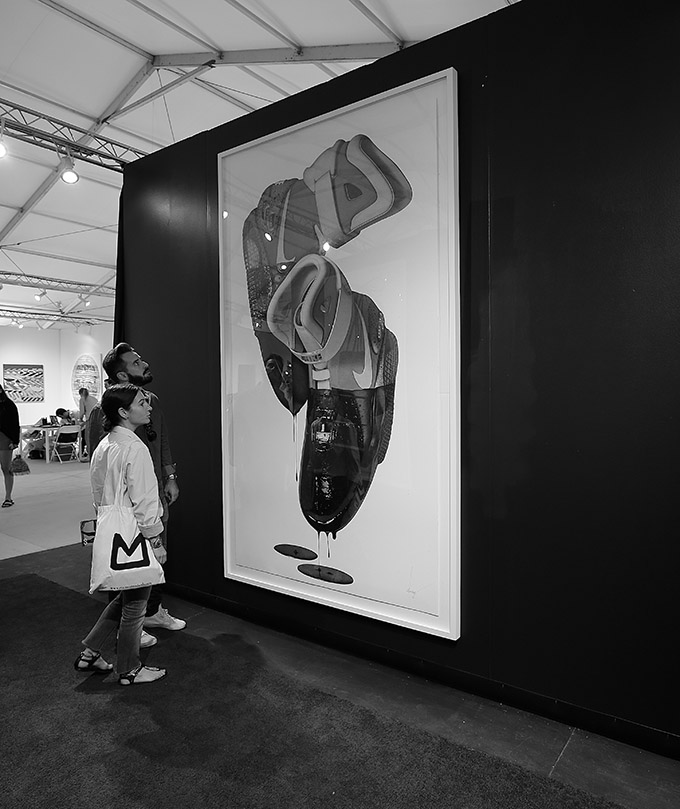 Countless celebrities came by, including Alicia Keys’s husband Swizz Beats who shared some of CJ’s work on Instagram @therealswizz. 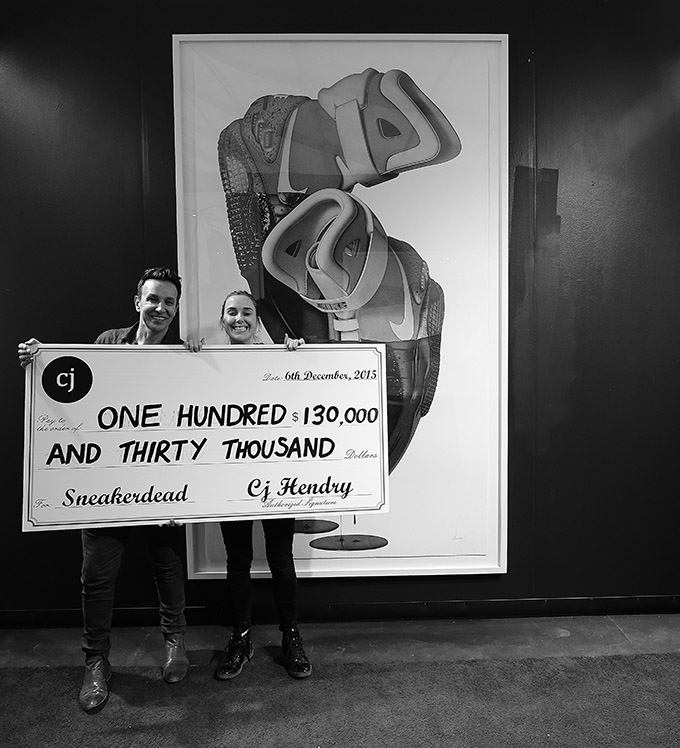