GHOST SHIP – THE FUTURE OF TRANSPORT COMES TO SHORE

The boat you see here is a 30-foot concept from designer David Borman. He has designed and developed it to be the efficient future of transport. ‘That Wally powerboat, which I think is $20 million for the50 footer, it sucks down something like 2,000 gallons of fuel an hour and it only does 70mph. I’ll be using less than a tenth of that amount of fuel going twice as fast.’
‘My tag line is: helicopter speed at a powerboat price. It’s the ultimate status symbol, but it’s got a practical side too. I love theBahamas, love the Tortugas, but they’re between 130 and 200 miles from here in Miami. If I were to have a conventional yacht that could only do 25mph and I’ve got a 3-day weekend with the kids, I might as well forget it. By the time I got there it’d be time to turn around and comeback home. Scale up to a 64 footer Sea Phantom and you’d literally be able to cross the Gulf of Mexico with impunity. It would cruise at150mph, you’d have room for several staterooms, and you could walk around in the wings. It would be fast enough to run from Key West toCuba in 20 minutes, when Cuba opens up. It would literally take you longer to get out of the harbor at Key West and back into Havana than it would to make the actual passage.’
Like a chimera between a stealth bomber and a submarine, the design is sculpted around the central body airfoil. ‘I was able to draw on NASA research, free over the Internet, from the ’60s to integrate into my philosophy’, David acknowledges. ‘I had to put a backbone on it to support the tail, and it just so happened that I had just seen a photograph of a children’s model of the late 1920s Bugatti Atlantique,so I lifted it almost directly from there.’
Borman has invested some serious time and effort in his dream projectt housands of man hours and $1.3 million in the project. But the rewards are potentially massive. 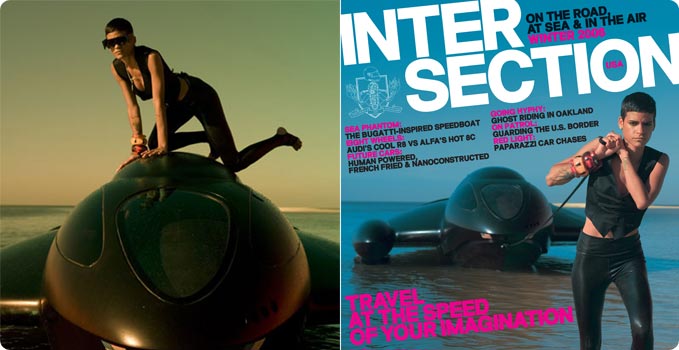 ‘The ultimate objective is passenger transport. For $2.5 million I’ll have maritime transport capabilities similar to a $10-12 million aircraft. Not only at a fraction of the purchase price, but also at a fraction of the operating expense and I’m not encumbered by the FAA’s rules. Airports are getting backed up; they’ve run out of expansio nroom. Aircraft can hardly get any bigger because the airports can’t get any larger. 60% of the world’s population live within 300 miles of a coastline; I could envision dozens of these just running up and down
the Florida coast alone. It could scale up to 90 feet if someone wanted to carry 100 passengers at high speed. It’s a whole new world of transport.’
The first customer Sea Phantoms will be 50 feet long, cost $2.5 million and be capable of cruising at 140mph with 24 people on board. By WesSiler. Exclusive online extract from Intersection Magazine.