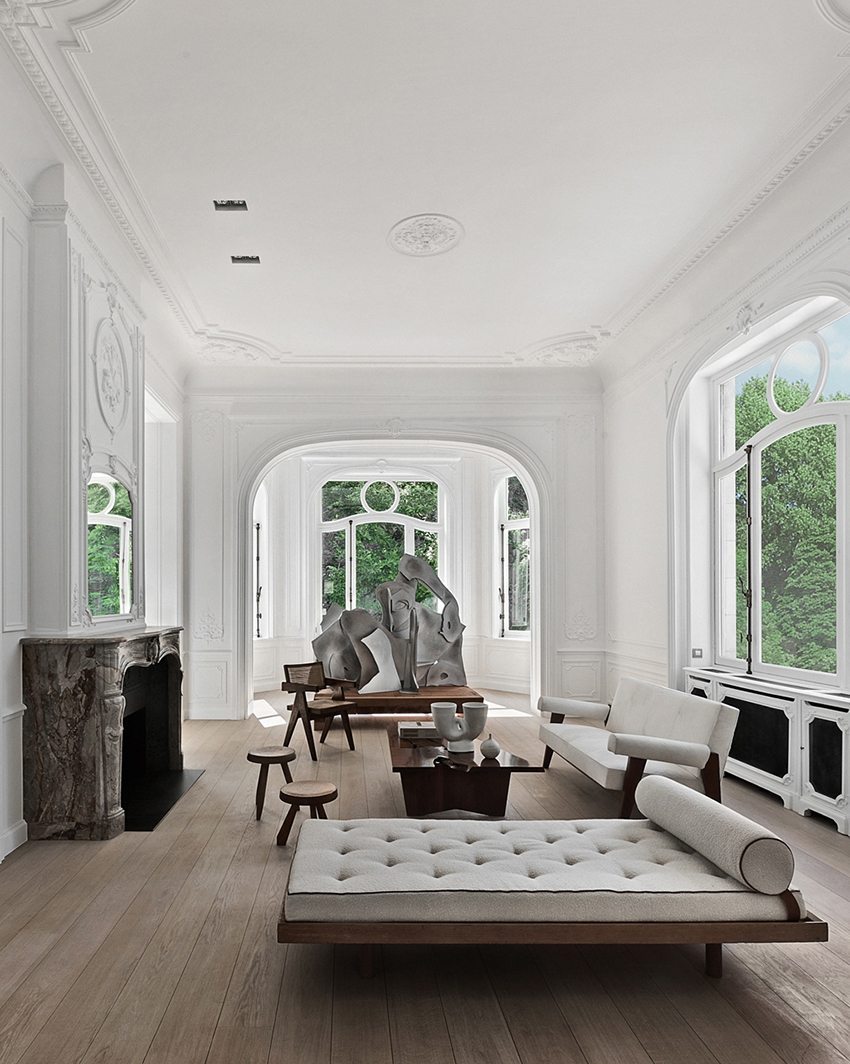 These images of the G House in Brussels, Belgium, have charmed us for some time. The impressive three-storey townhouse was designed in 1907 by the architects François Kielbaey and J. L’Anvre.

The building’s French limestone façade was restored by the Brussels-based architect Olivier Dwek as part of an extensive re-configuration. 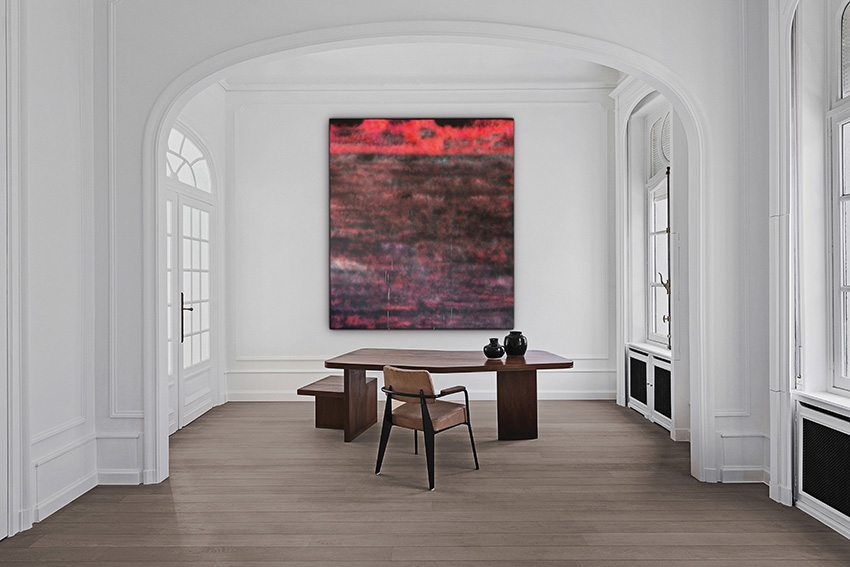 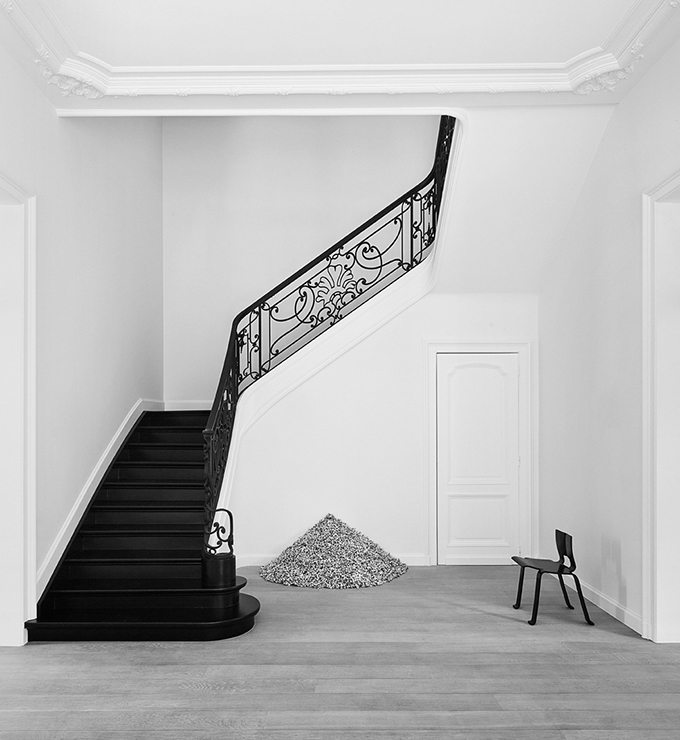 We wrote about Dwek’s work last year – the T House on the Greek Island of Zakynthos – and noted the clarity and confidence with which the residence speaks the languages of both the past and the present; of local traditions and modern minimalism. 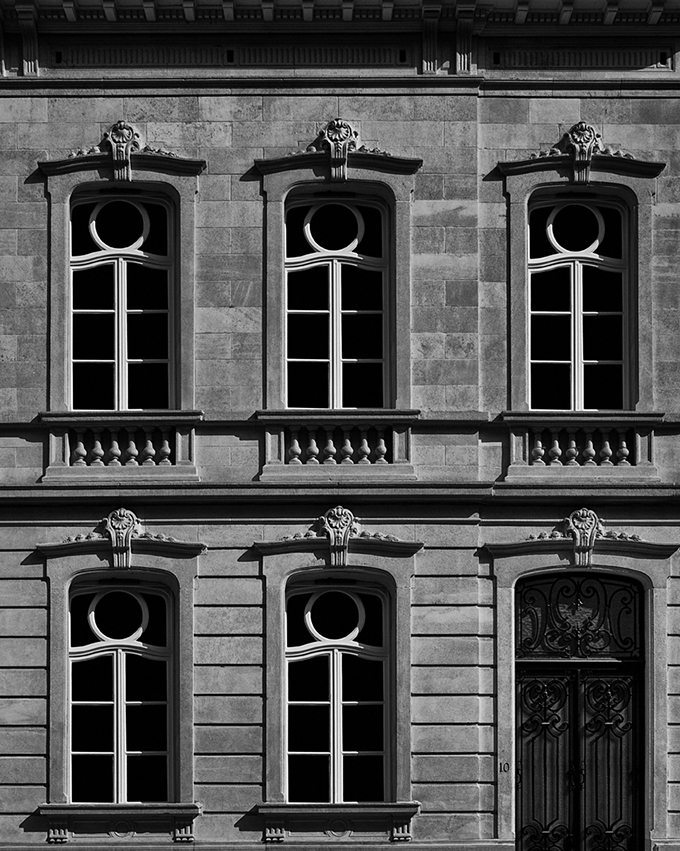 The same can be said of the Brussels residence. Although the building is traditional and exudes old-world charm, the renovation has also added an edge of current cool. Yet, the result is a timeless elegance that carries no specific label. 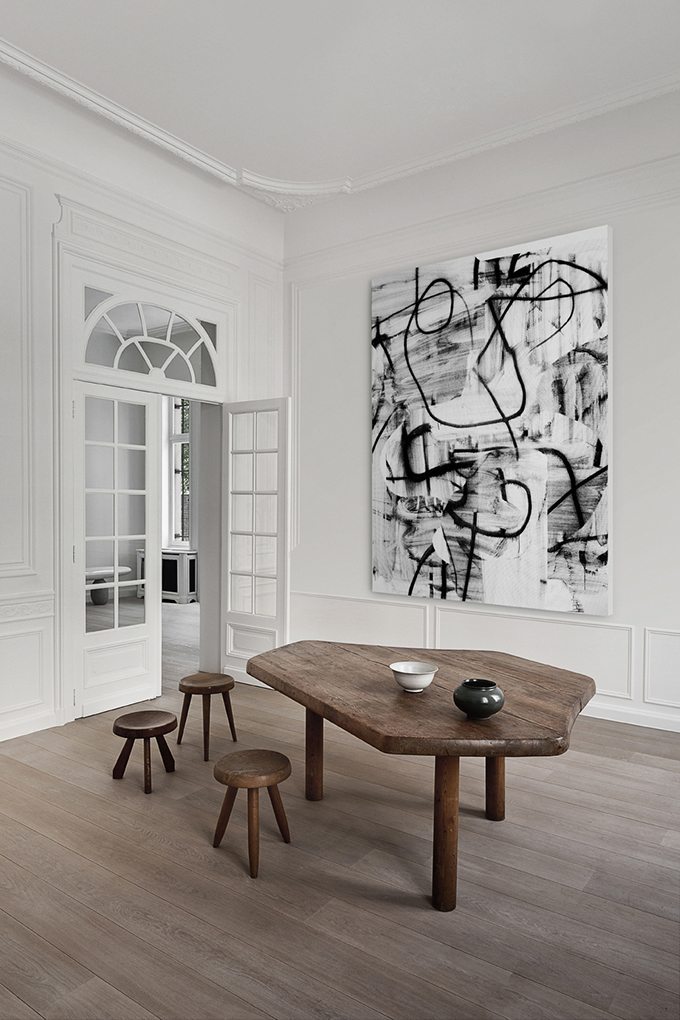 Original windows were restored where possible and some were replaced with exact replicas of the original. Light flows beautifully throughout the building, letting the garden in to add its green colour to the otherwise white interior.

One of our favourite elements is the central staircase that was extended up n additional floor. The imposing black wrought-iron balustrade of the new section is an identical reproduction of the original one below. 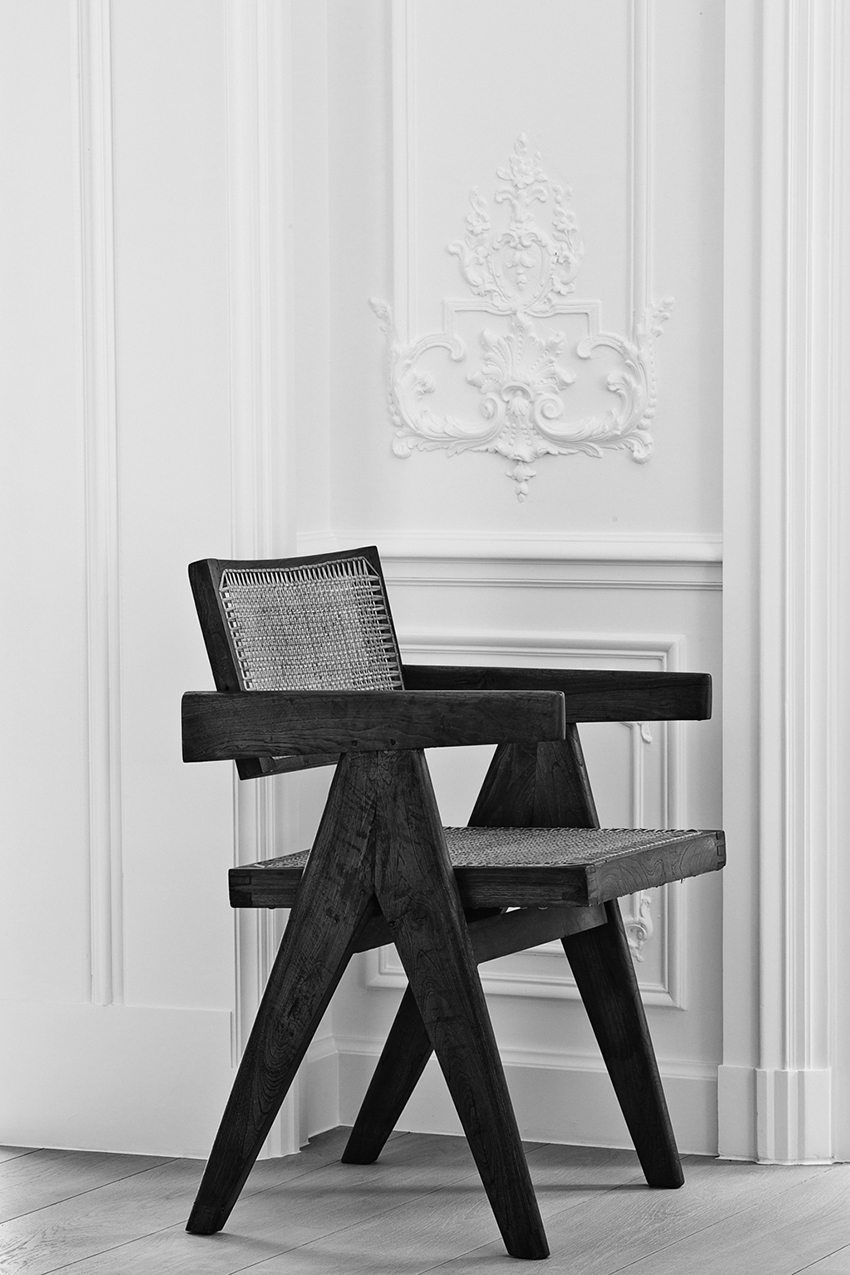 Olivier Dwek has designed some of the furniture for this residence, but the most distinctive pieces in these images come from two of his favourites Pierre Jeanneret and Charlotte Perriand. The soft forms of the mouldings, doorways and windows contrast beautifully with the more angular, contemporary-yet-classic, visually imposing forms of their furniture. 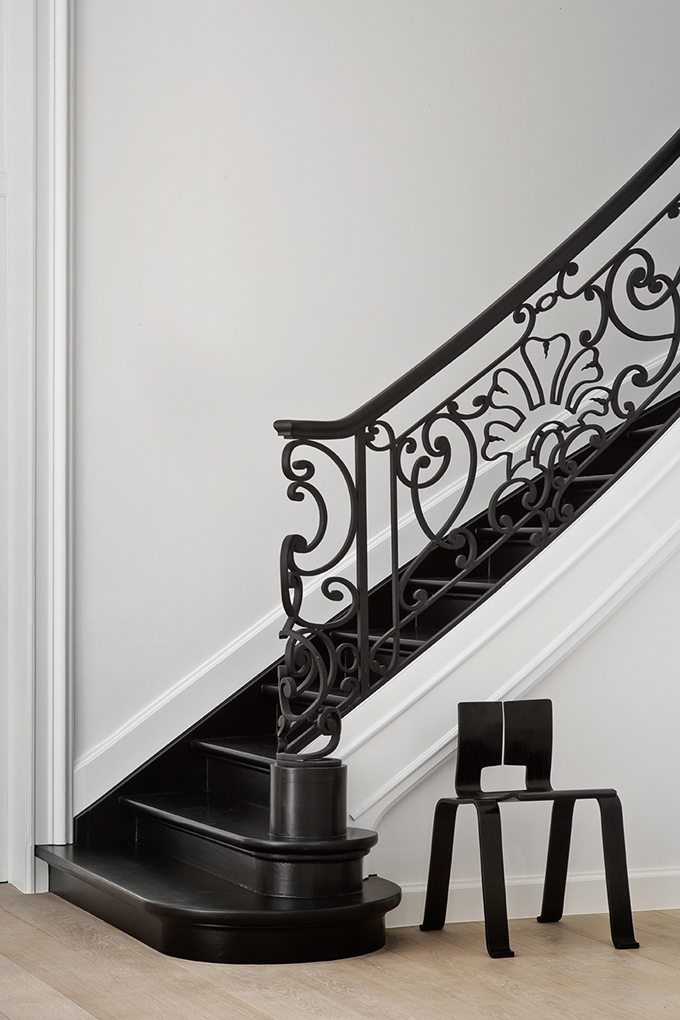 Jeanneret was a Swiss architect who for more than 20 years worked with his more famous cousin Charles Edouard Jeanneret – better known by his pseudonym, Le Corbusier.

In the Brussels residence, Jeanneret’s High Court Down sofa from about 1955 with its solid teak frame and white foalskin upholstery is positioned right next to French architect and designer Charlotte Perriand’s daybed (from 1956-59) with its elegant neck roll in white leather. 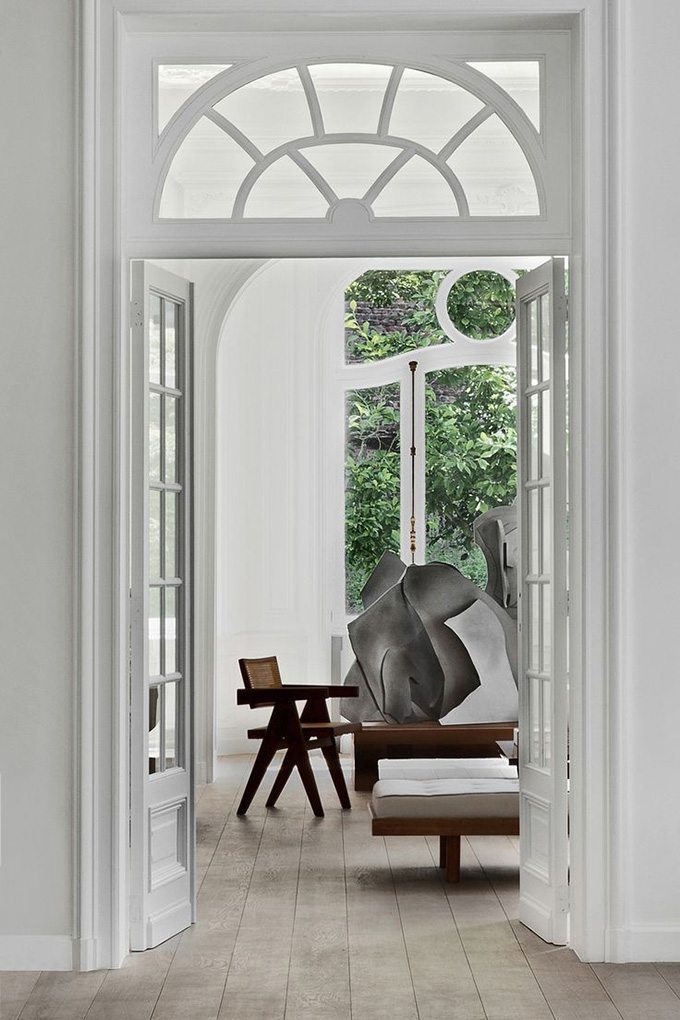 Under the staircase, Perriand’s Ombre chair of black bent plywood (1958) creates an stark connection with the black iron baluster. 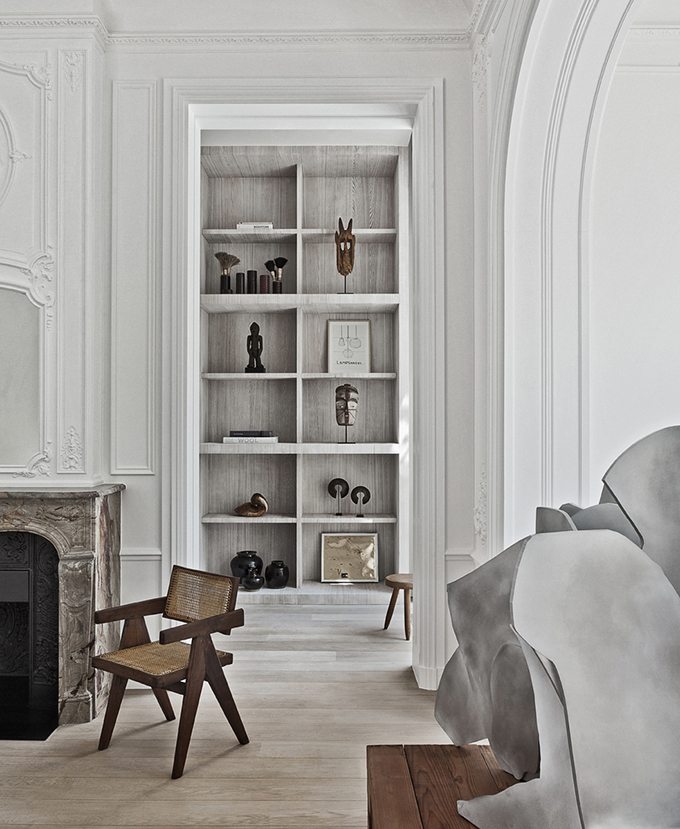 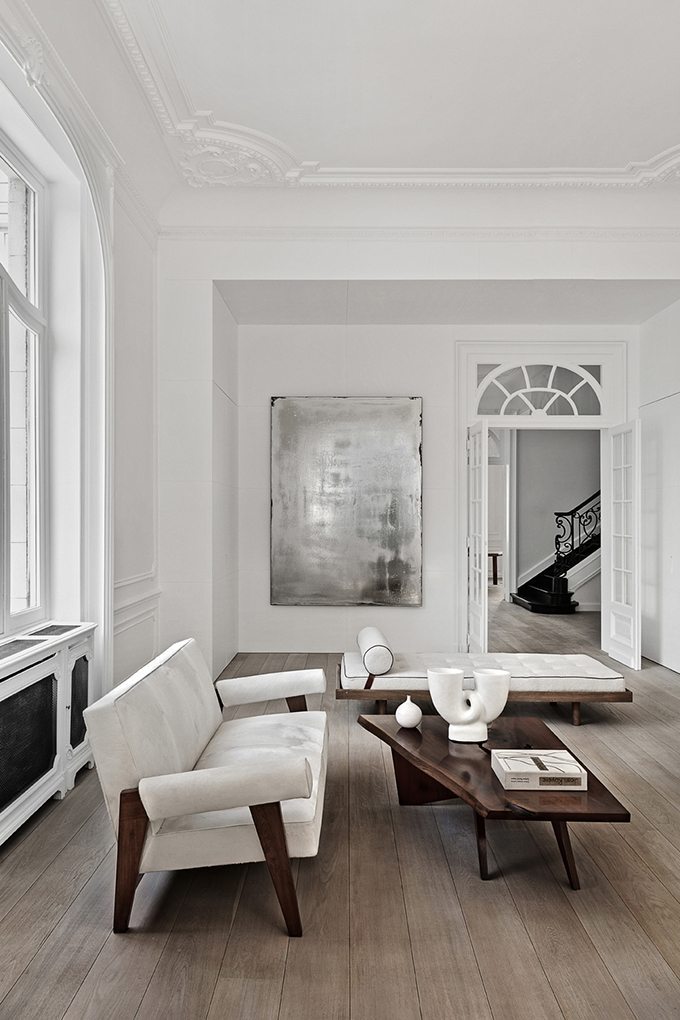 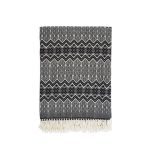 Patterned European rug, handmade in ‘Sleipner’ pattern to create a stylish yet cosy home setting. Will add a unique a contemporary look to soft furnishing including living room and bedroom spaces.