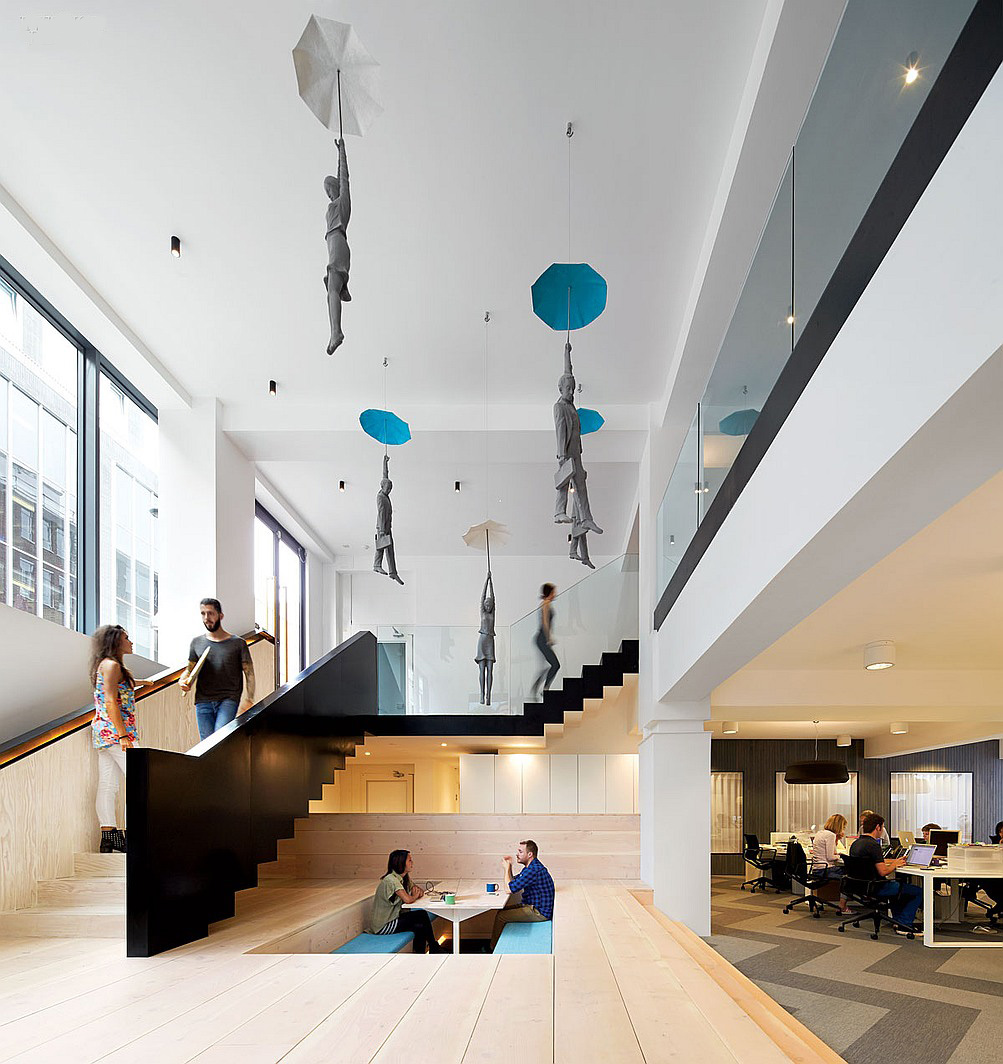 We cannot take our eyes off the eerie umbrella-holding human figures that dangle seemingly in mid-air in the 7,000 square-foot (650 square metre) office of ad agency Fold7 Farringdon (Clerkenwell, London). 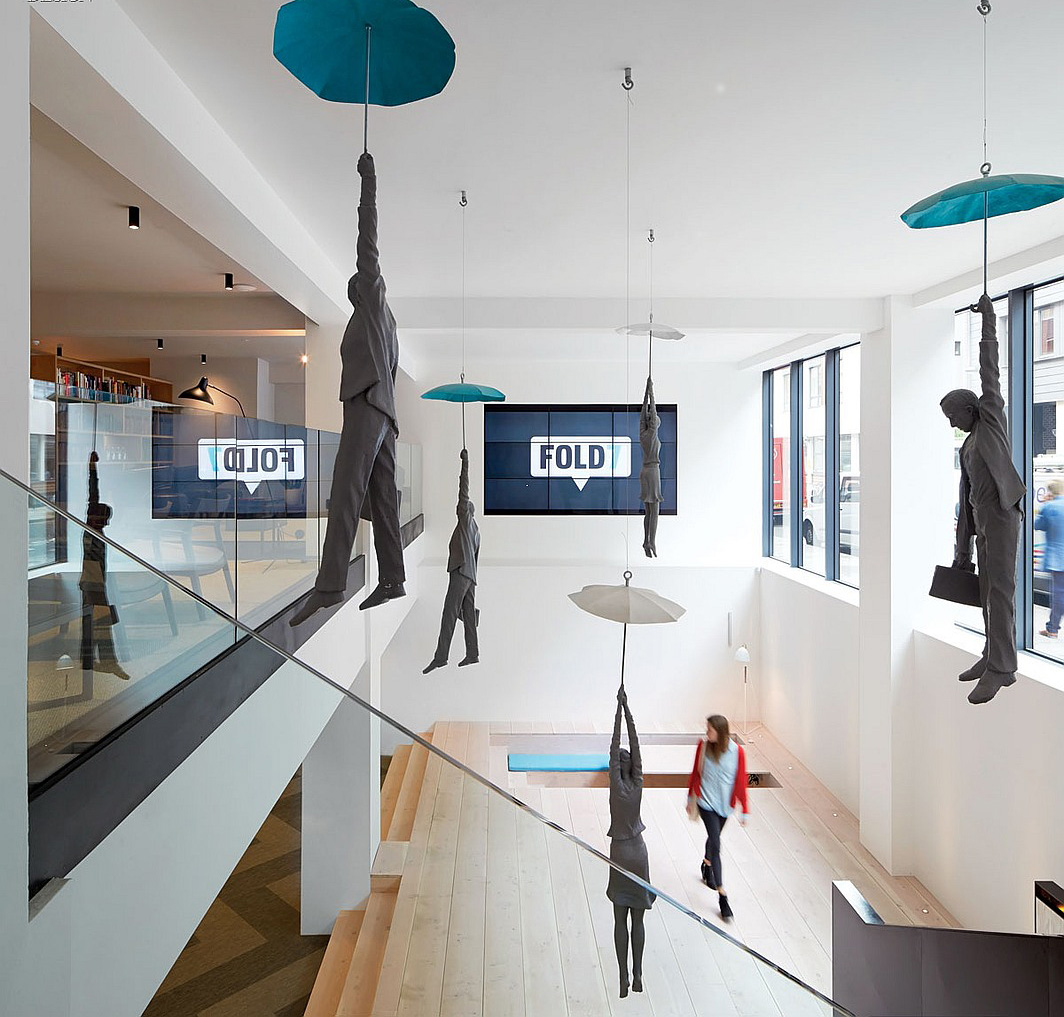 The figures were created by Czech artist Michal Trpák who has used similar humans-with-umbrellas themes, most notably in his large-scale work, Slight Uncertainty, installed in an office complex in Prague in 2012. 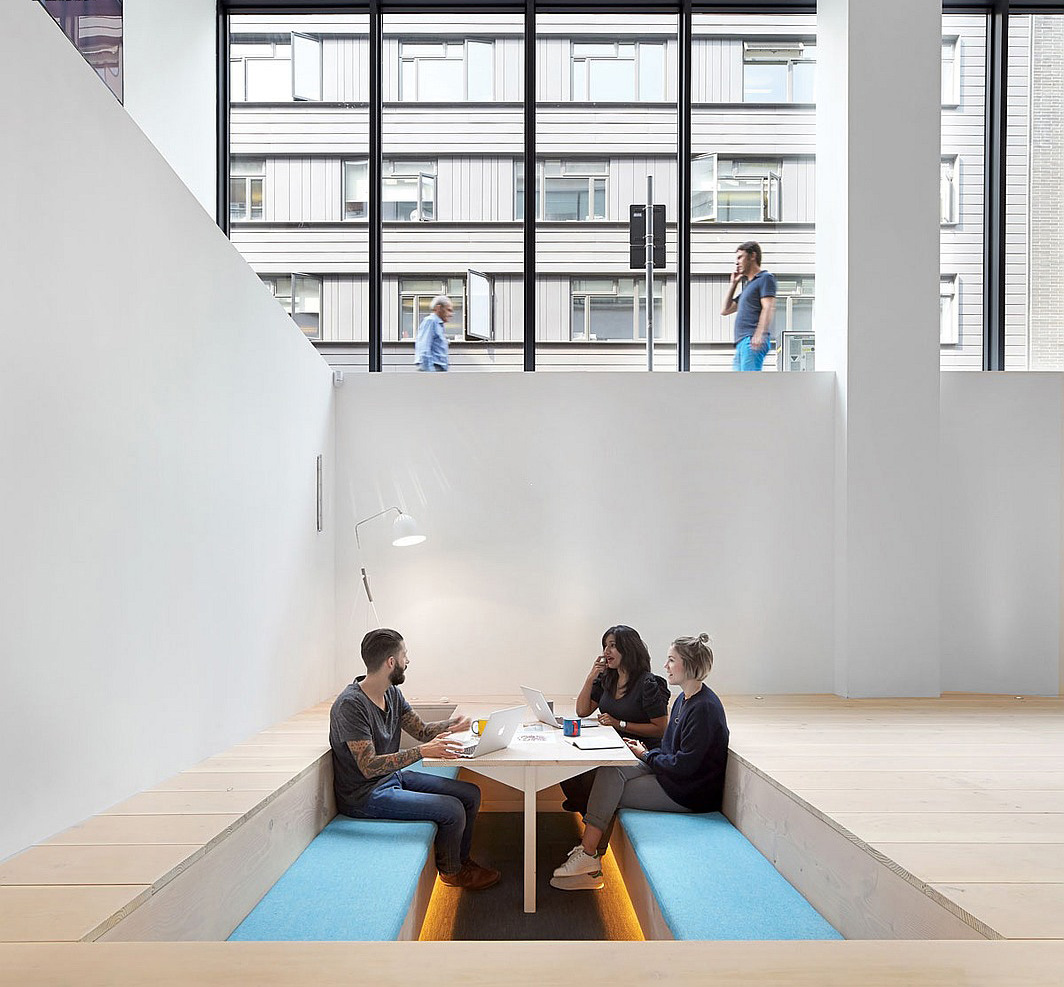 In Fold7’s office, the humans float in the entrance area of the ad agency’s premises located in a refurbished 1980s office building. The sheer volume of the space gives the artwork the visual open air it requires in order to appear fun and inviting, as intended, rather than spooky and menacing. 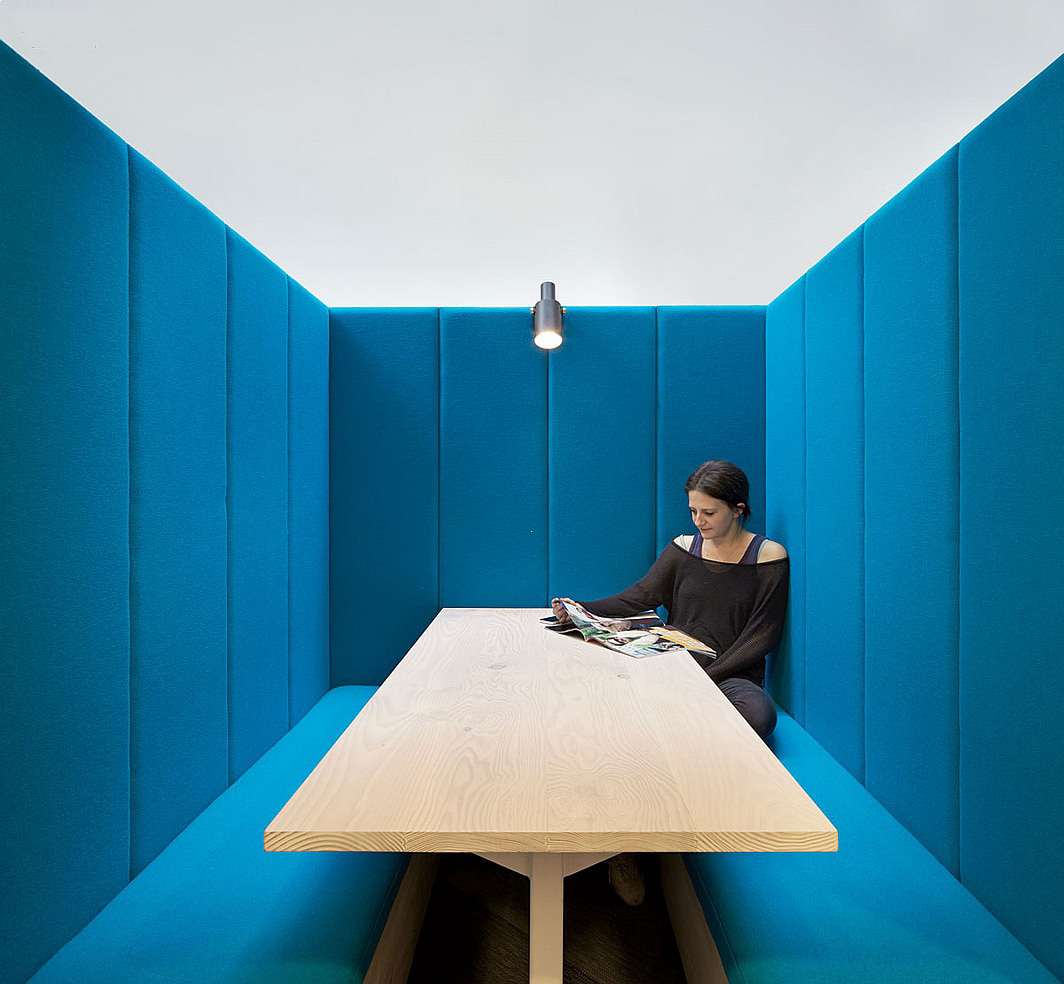 Fold7’s founder Ryan Newey and Paul Crofts Studio acquired the art as part of the design of the swanky digs for the 45 Fold7 employees. A large part of the space is unassigned and functions as an open plan with various options for employees, clients and projects to move around as needed.
Fold7’s slogan, ‘Welcome to the Fold,’ greets visitors in the form of a massive sign by Voodoo Design. 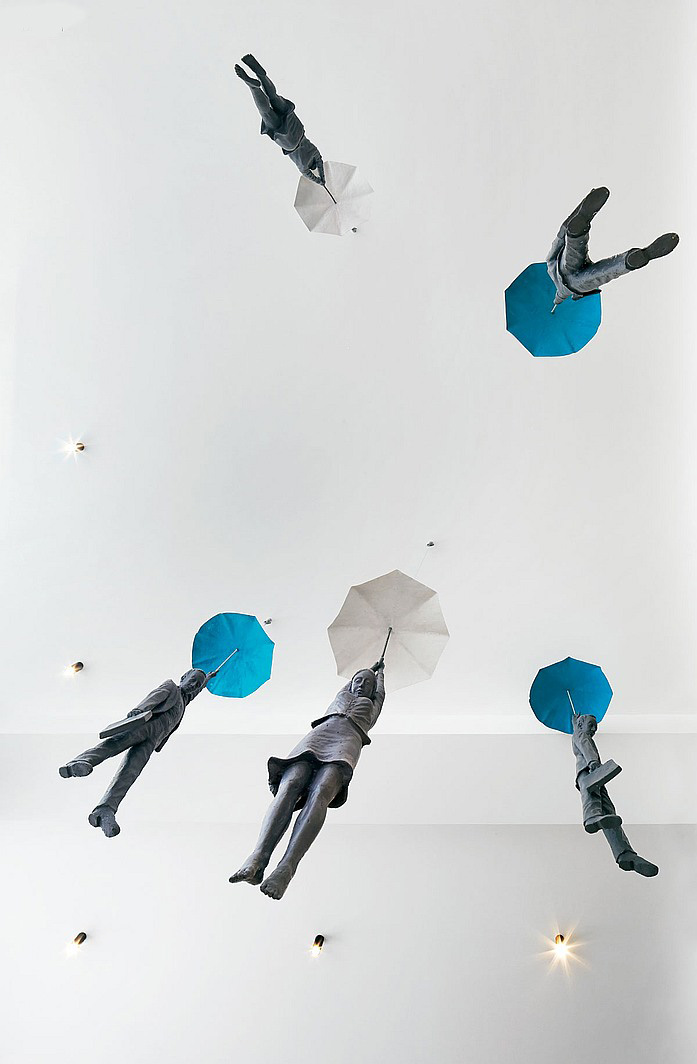 Paul Crofts Studio was established in 2003 in London by furniture design graduate, Paul Crofts, and it is known for creating interiors as well as customized products and furnishings.

Ryan Newey’s career began with the creation of the Ted Baker brand that was the founding client of his firm. Since that time, his Fold7 agency’s clients have include British Airways, Carlsberg, Disney, Nike and Reebok. – Tuija Seipell 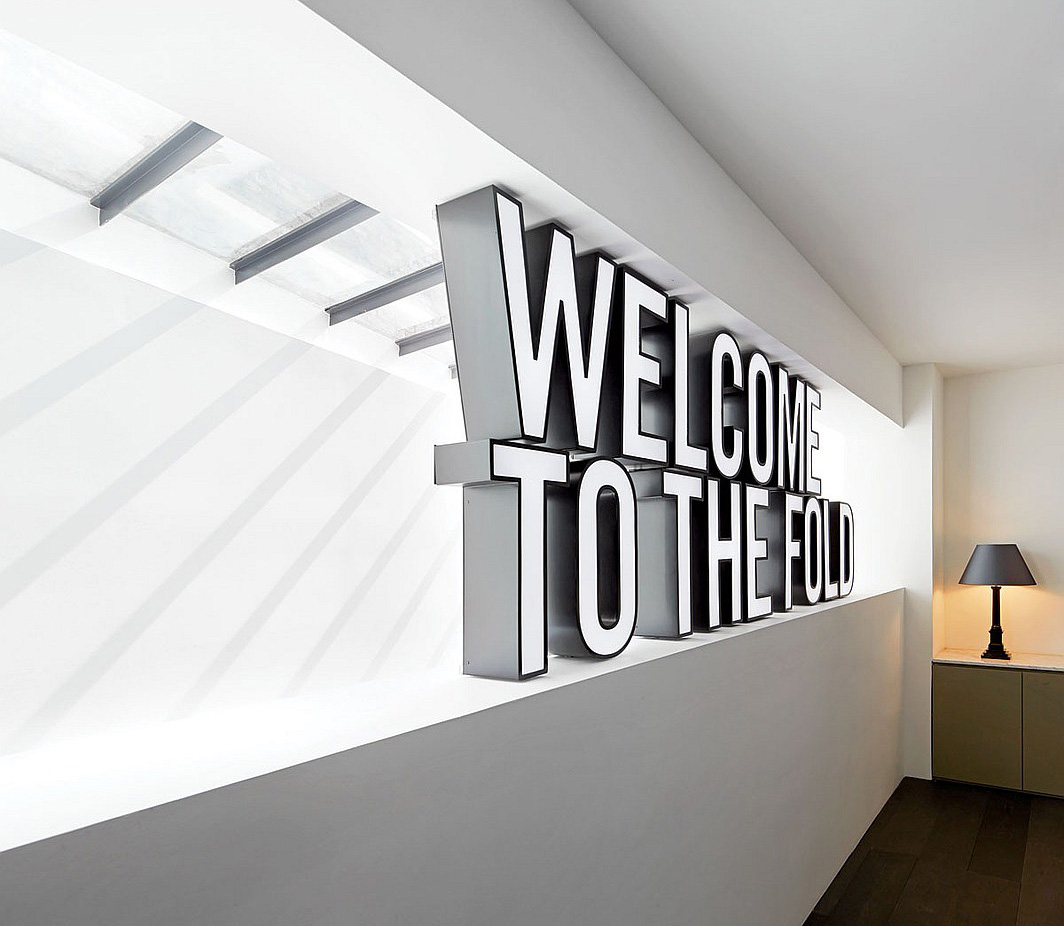