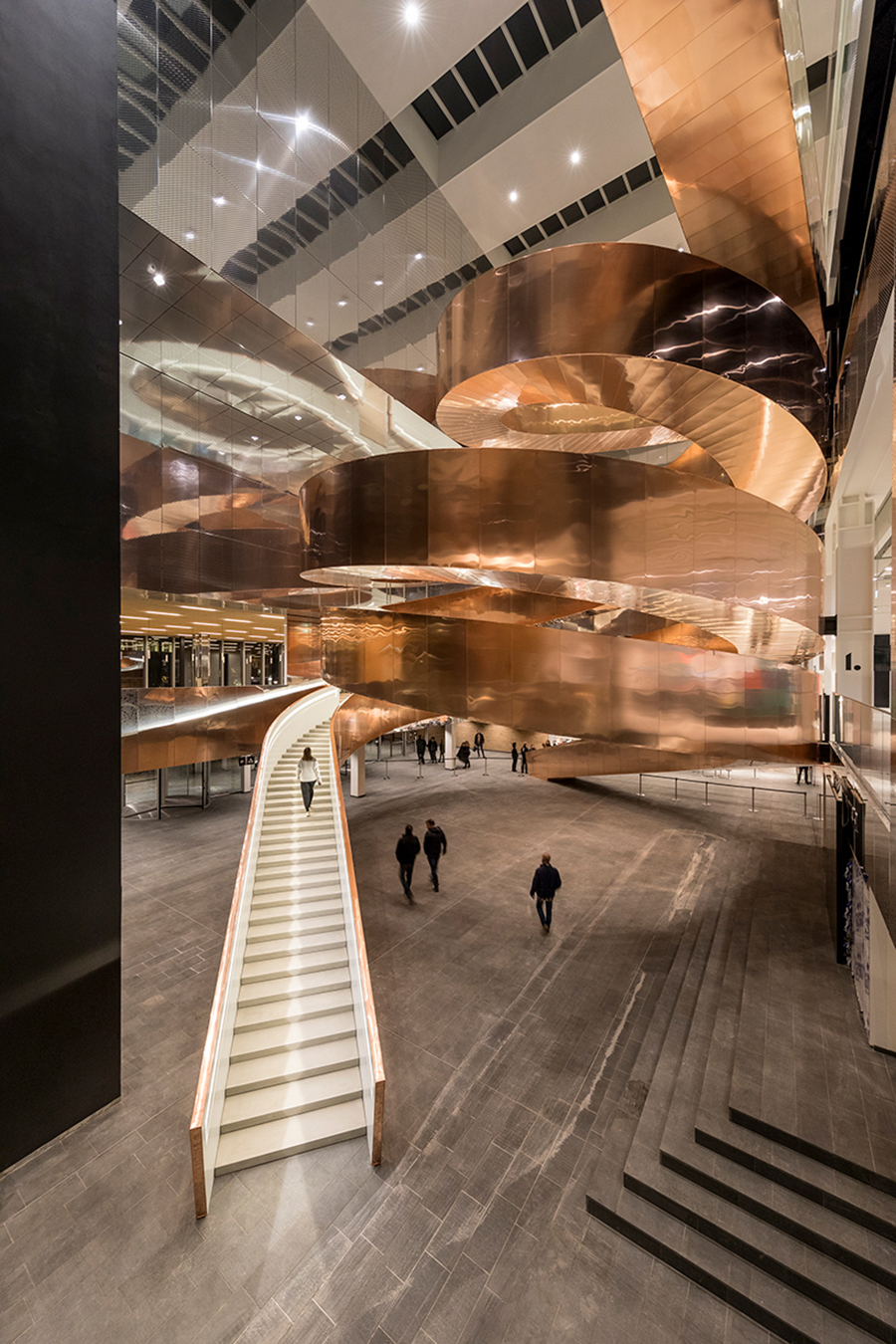 In Denmark, a cool re-iteration of the Experimentarium science centre has just opened and its show piece is a massive staircase.

It is one of the finest modern examples of a helical staircase, which differs from a spiral staircase in that it does not have a newel (a supporting central post) and handrails are built on both sides. 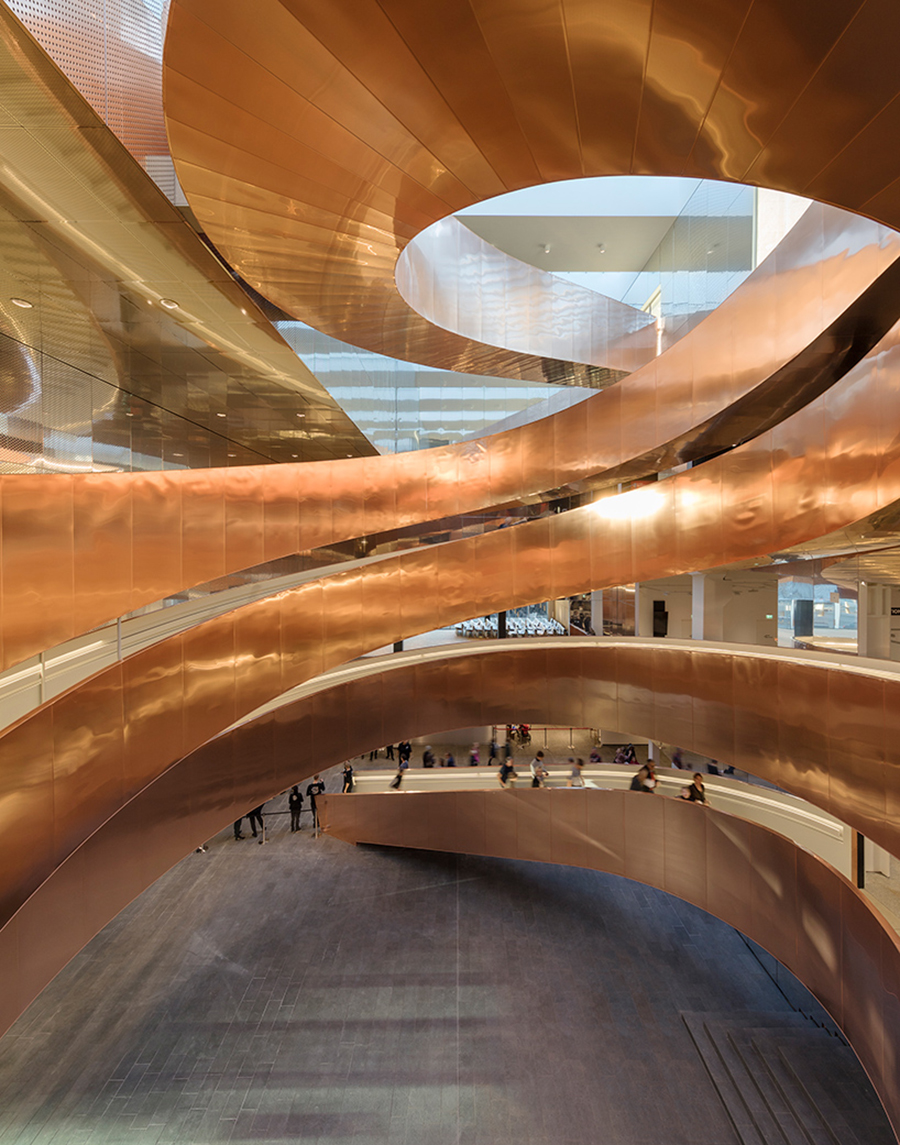 Since its opening in 1991, Experimentarium has been one of Denmark’s favourite attractions and has seen more than 8 million visitors.

Located about 15 minutes’ drive north of Copenhagen, in the town where the Tuborg beer brewery was founded, Experimentarium has now doubled its exhibition space to 11,500 square metres (123785.00 sq.ft) spread over four floors. 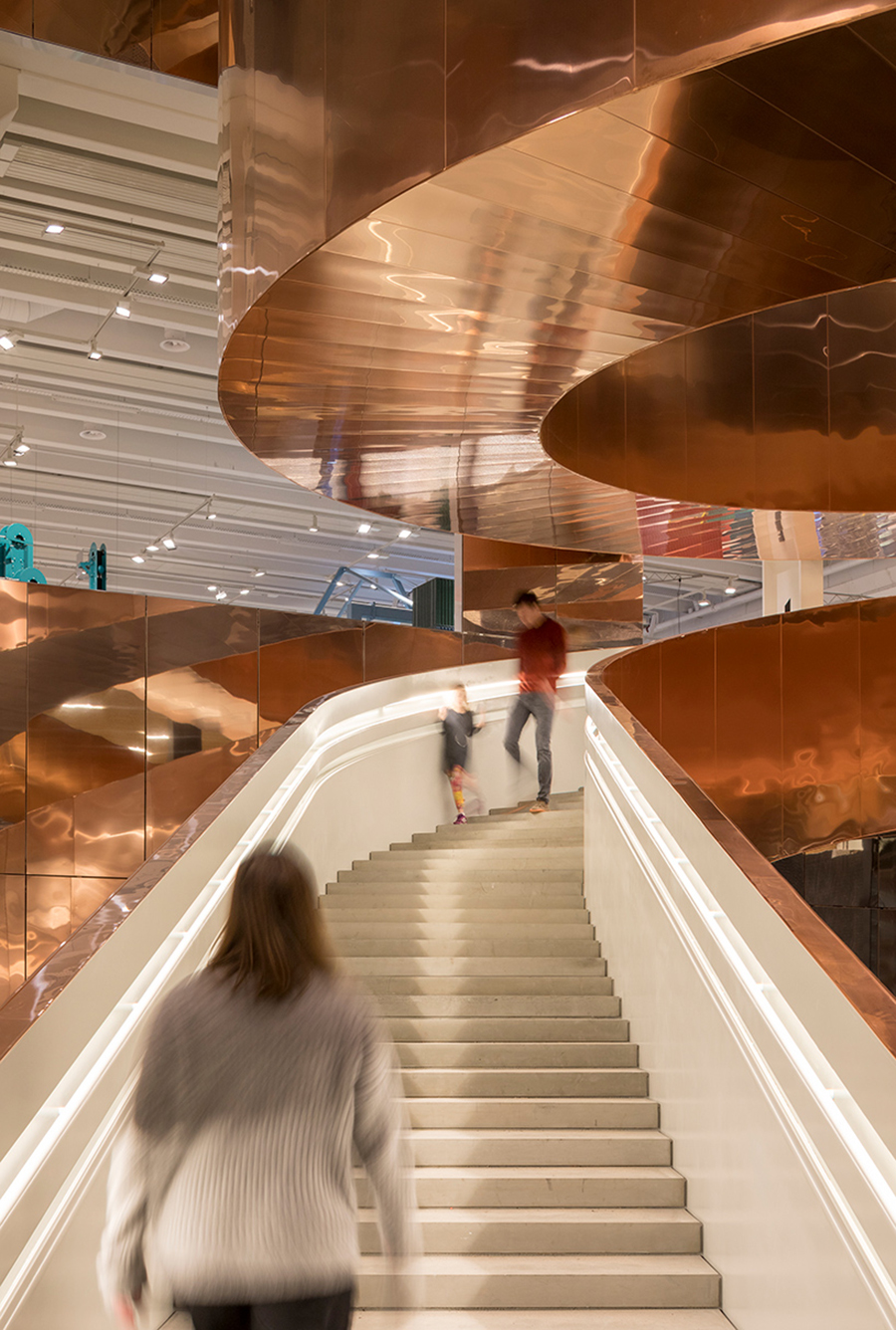 The expansion was designed by Danish CEBRA architecture after winning the architectural competition in 2010.

CEBRA’s inspiration came from not just the science and technology focus of the Experimentarium but also from the original building, a former soft-drinks bottling facility for Tuborg. 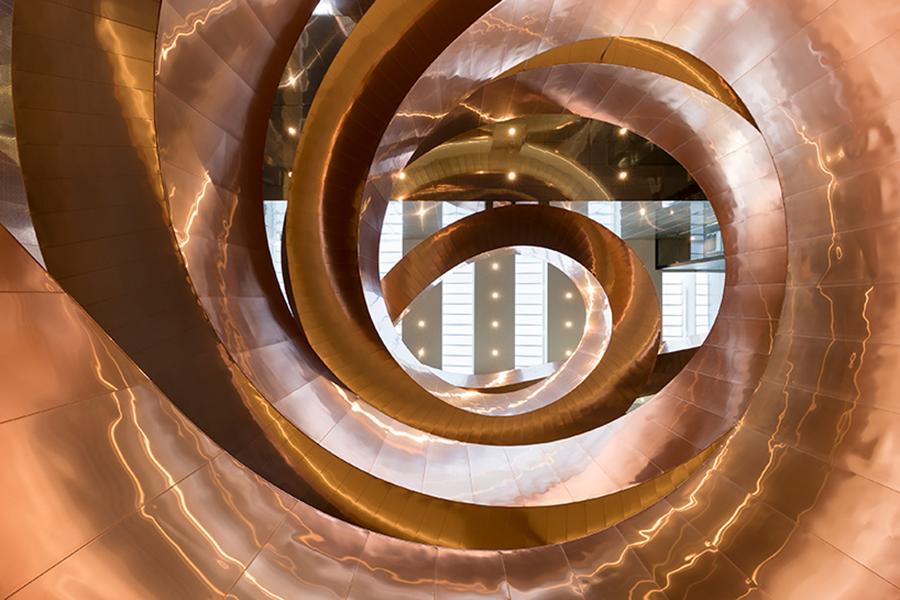 According to CEBRA, the copper staircase evokes an abstract version of the DNA strand’s structure. The staircase is built from 160 tons of steel and clad with 10 tons of copper.

Our favourite part of the staircase is actually its minimalist start. The attractive, simple white stairs start off the open space with no fanfare or particular lead-in, yet the white path seems to invite and beckon and draw you in, into something secret and hidden. And isn’t that the perfect metaphor for what a Science Centre aims to do – to encourage curiosity and the taking of steps in new directions? 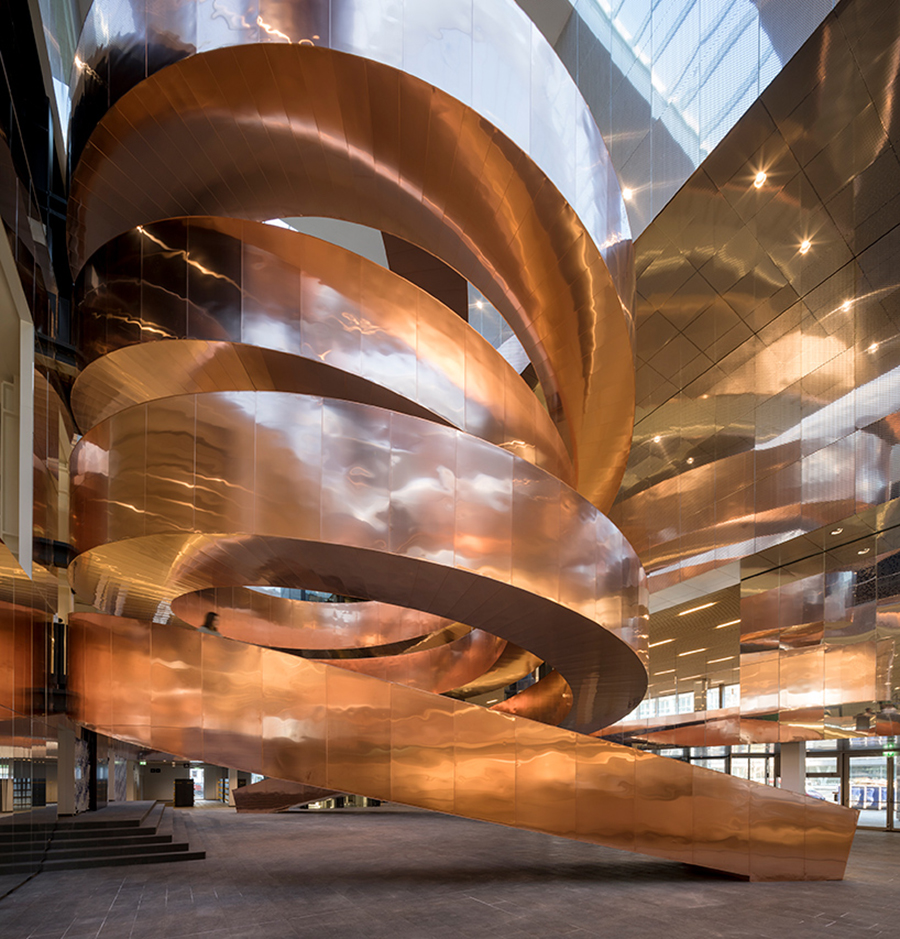 As a nod to the building’s history, Experimentarium’s new aluminium facade is made partly of recycled beer and aluminium cans. The perforation pattern of the façade illustrates how the flow of air and fluid changes when it meets resistance. 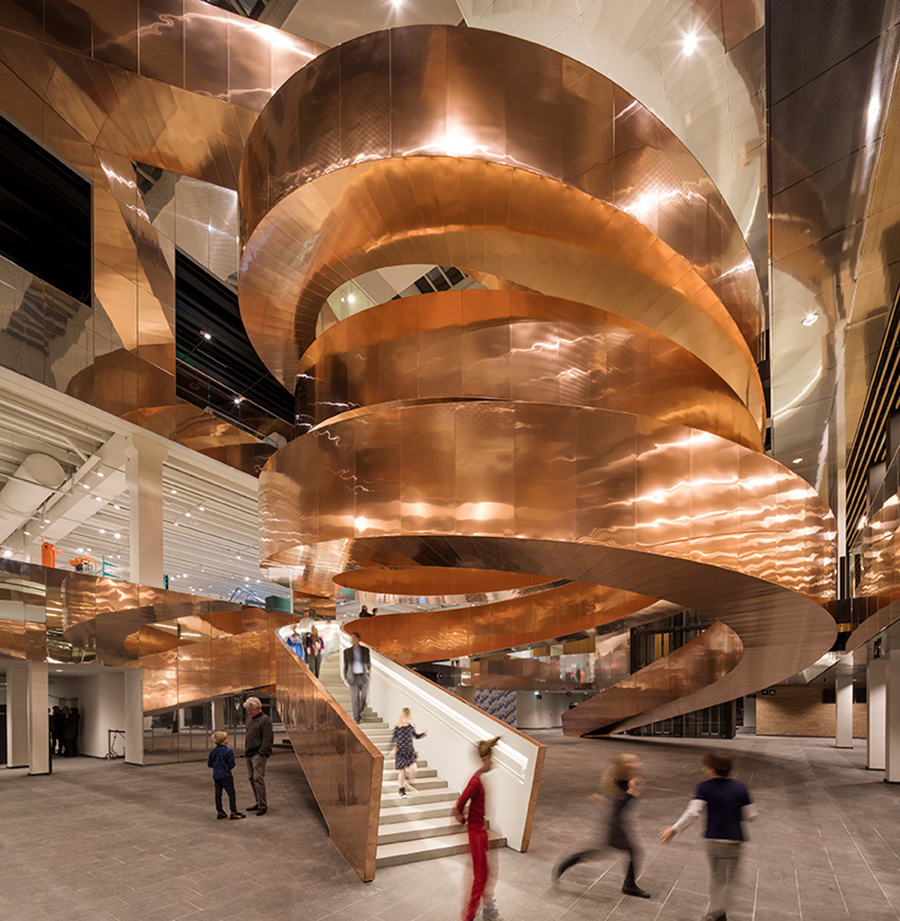 CEBRA architecture was founded in 2001by architects Mikkel Frost, Carsten Primdahl and Kolja Nielsen. They now have a staff of more than 50 and offices in Aarhus, Denmark and Abu Dhabi, UAE. Their work has focused on large public projects including museums, visitor and cultural centres and schools. – Tuija Seipell. 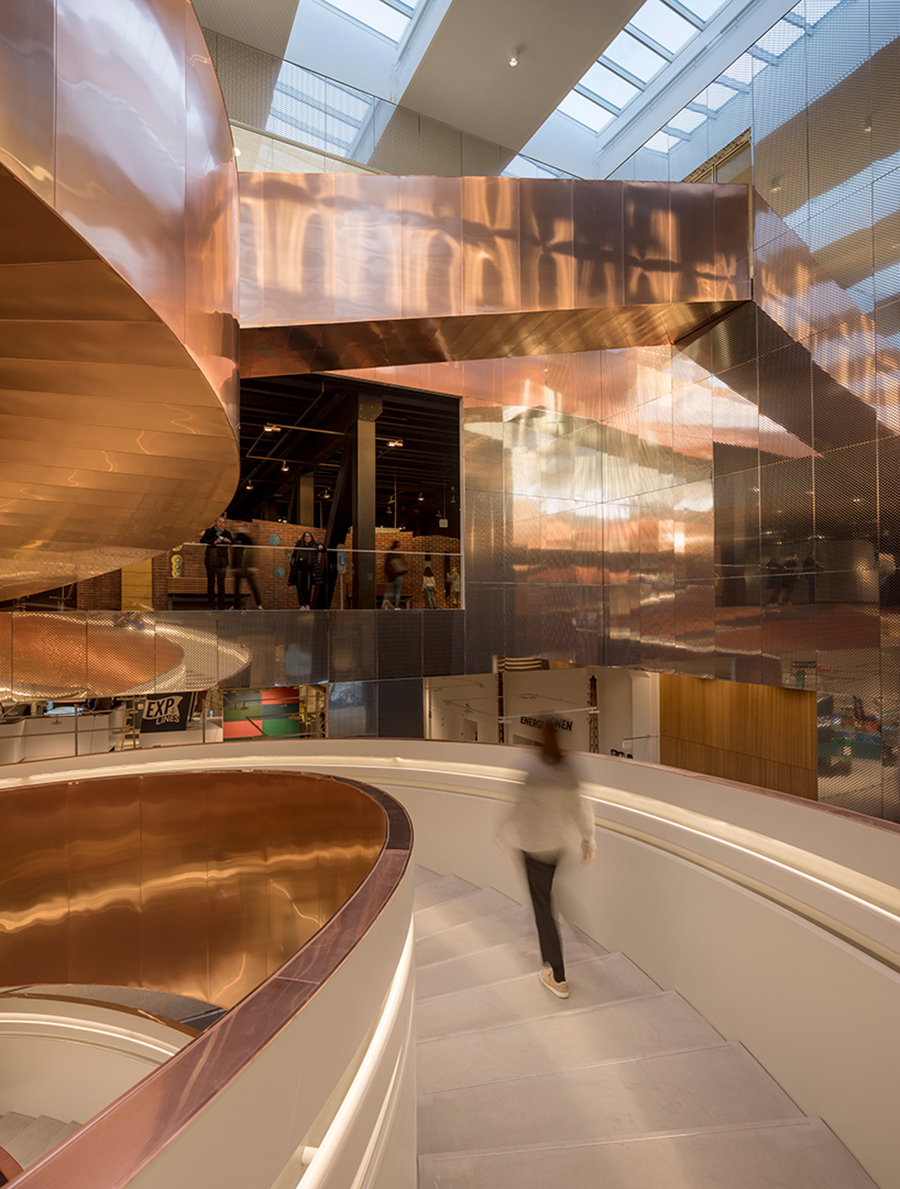