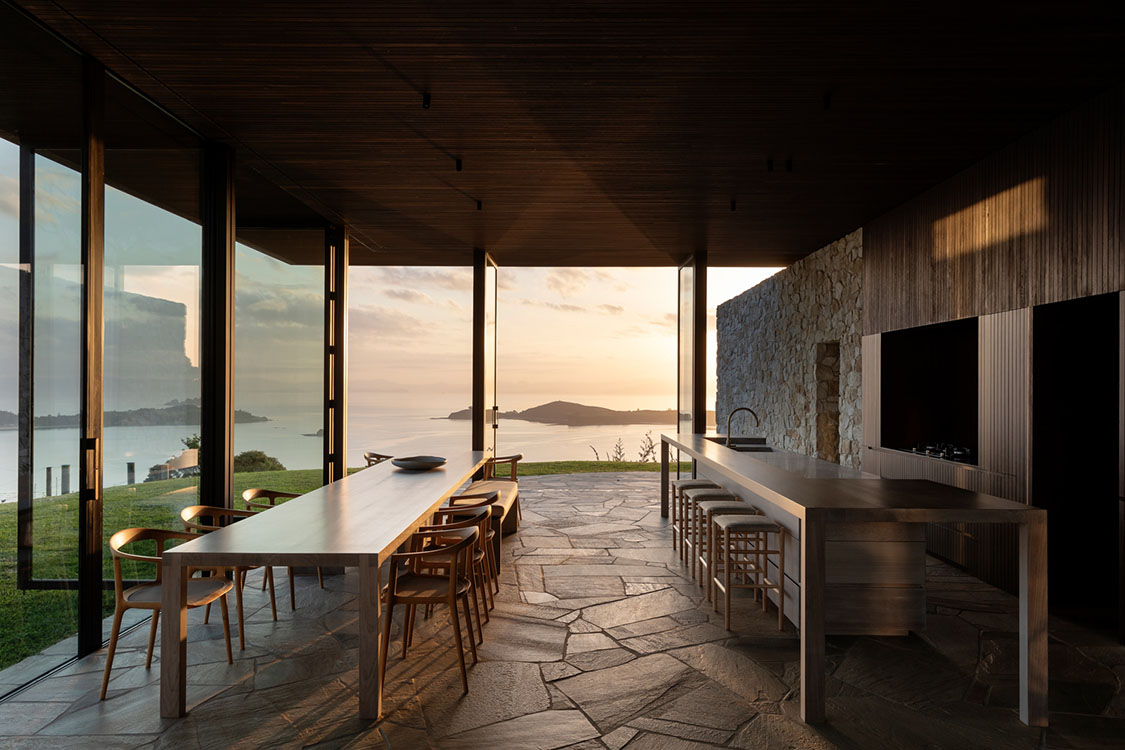 A family-owned piece of land on Waiheke Island had long been the family’s favourite hiking spot. Taking the 40-minute ferry ride from Auckland’s central city terminal, the family arrived at Waiheke’s ferry terminal year after year to shake off their busy city lives and truly relax. 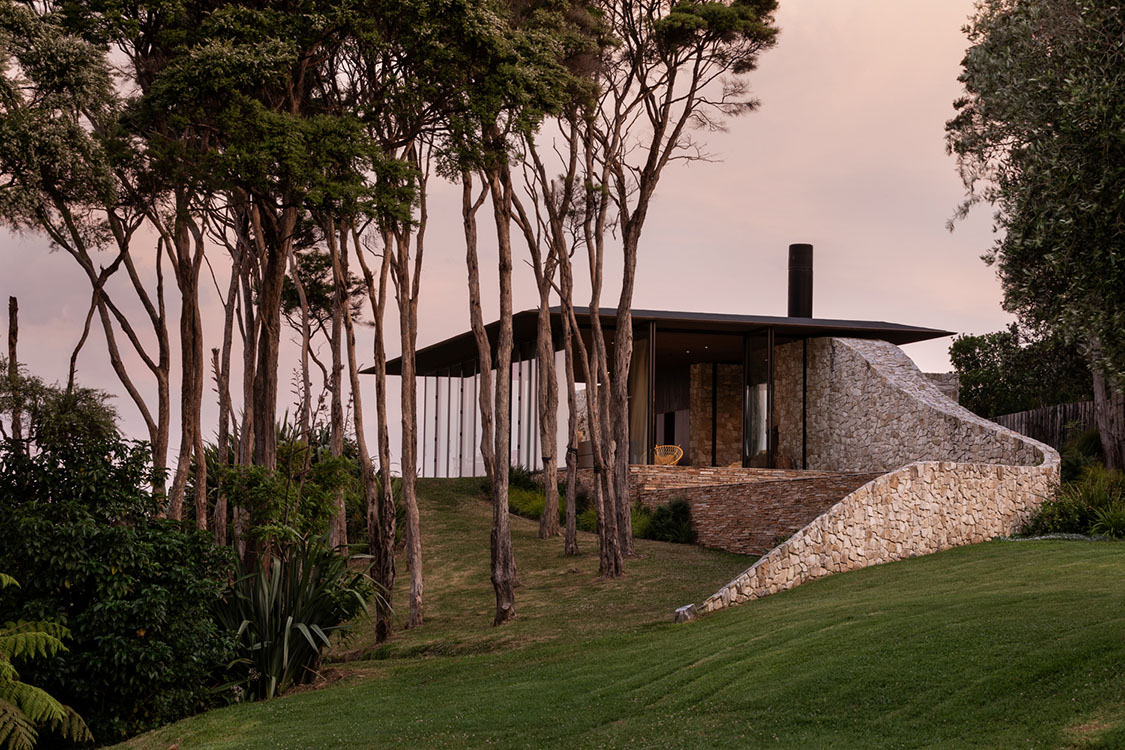 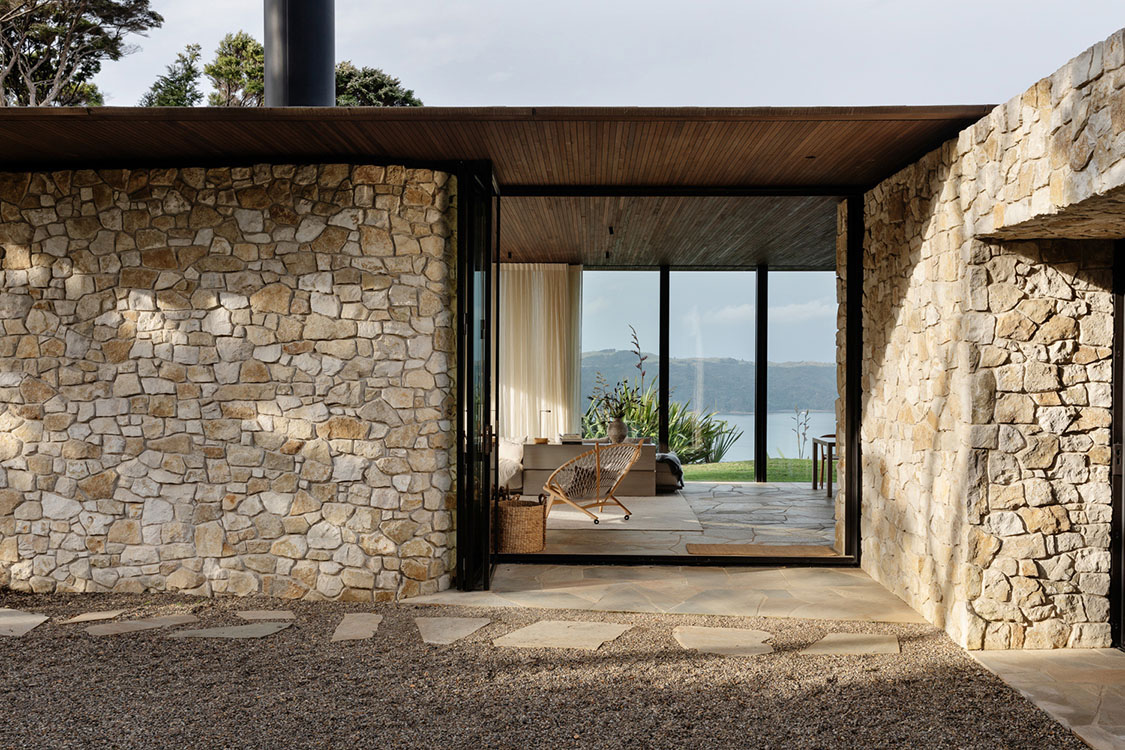 Eventually they also realized that they will never tire of the views over the Pacific Ocean’s Hauraki Gulf (Tikapa Moana) at the North Island of New Zealand, and so they decided to build a more permanent structure on the site. 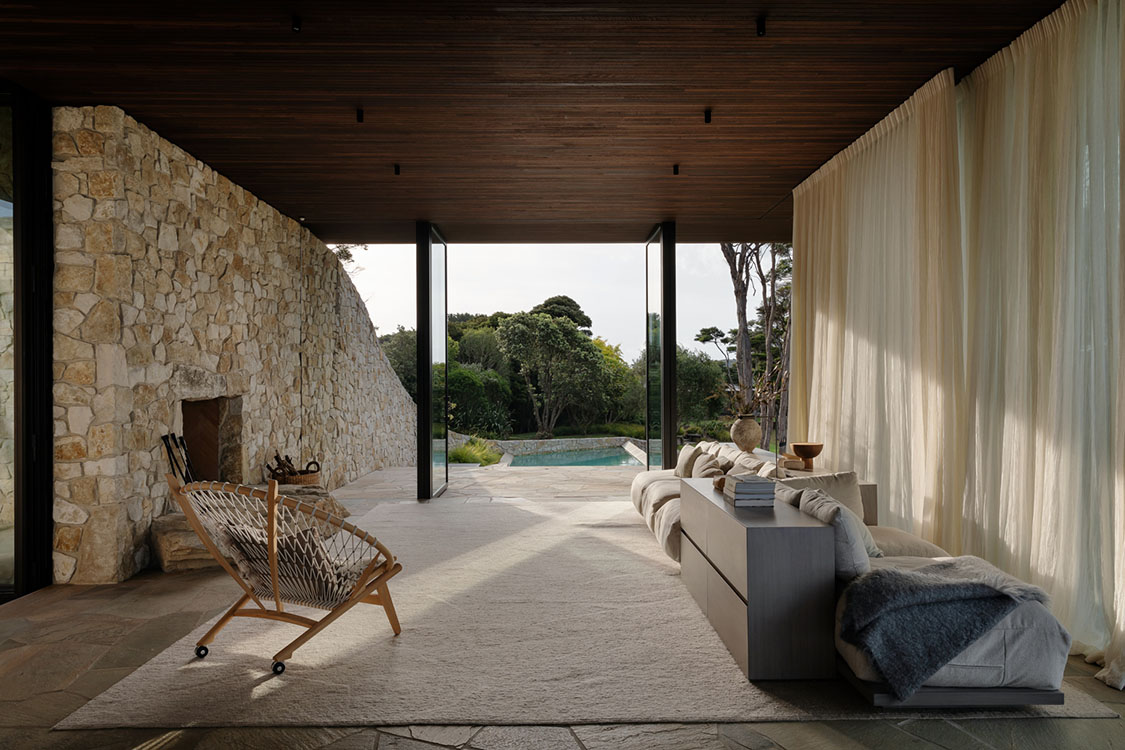 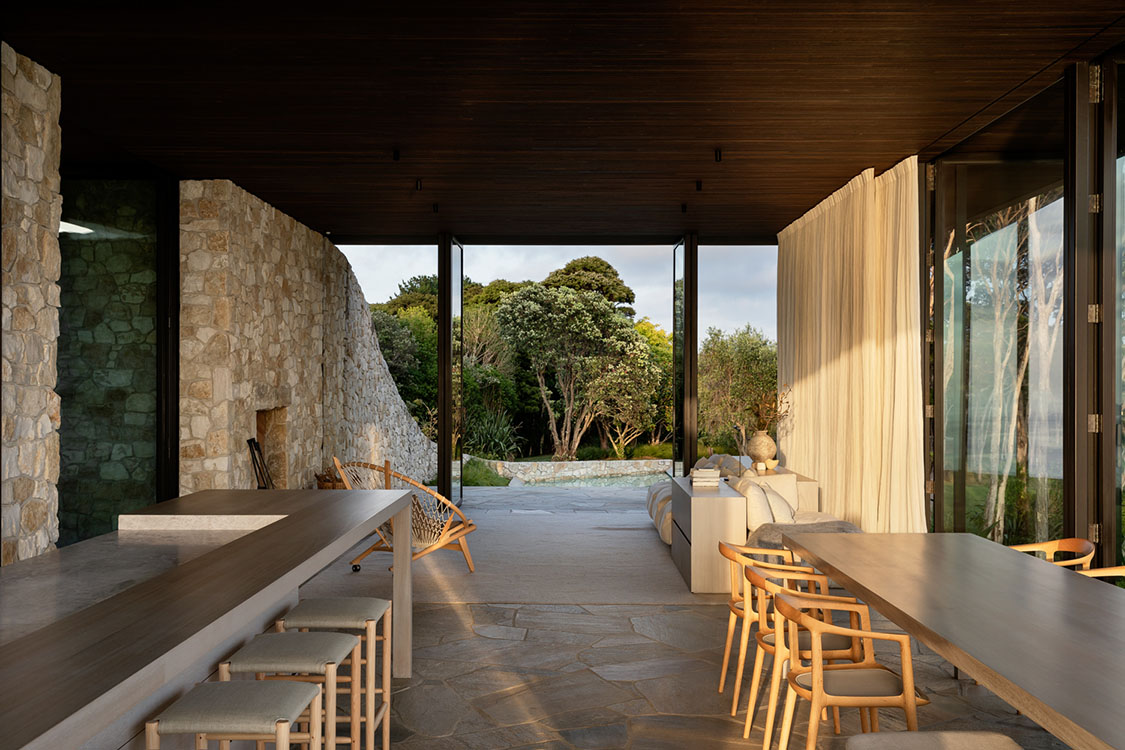 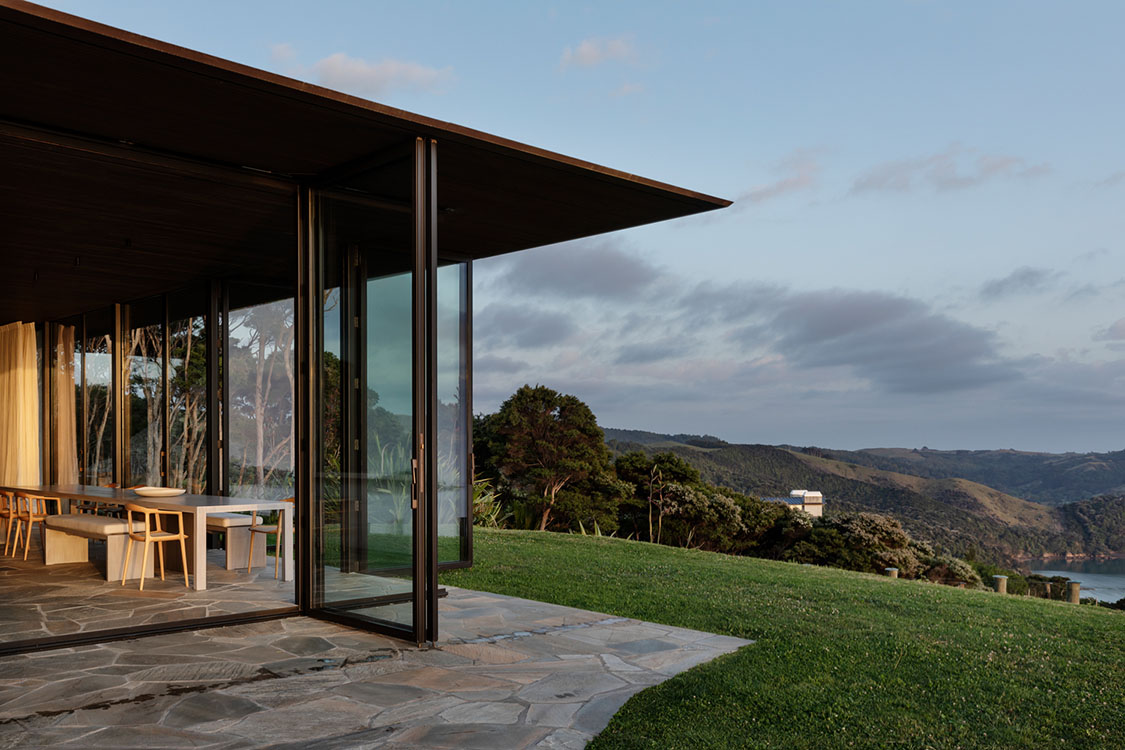 However, they did not want an imposing recreational property or a lavish and hectic hotel-like pad for guests. What they wanted was an upgraded cave, really, it now seems. Or, as their chosen partners, Cheshire Architects, have described it: A place where they could feed 30 but sleep none. They love entertaining, but intend to keep the place strictly for themselves. 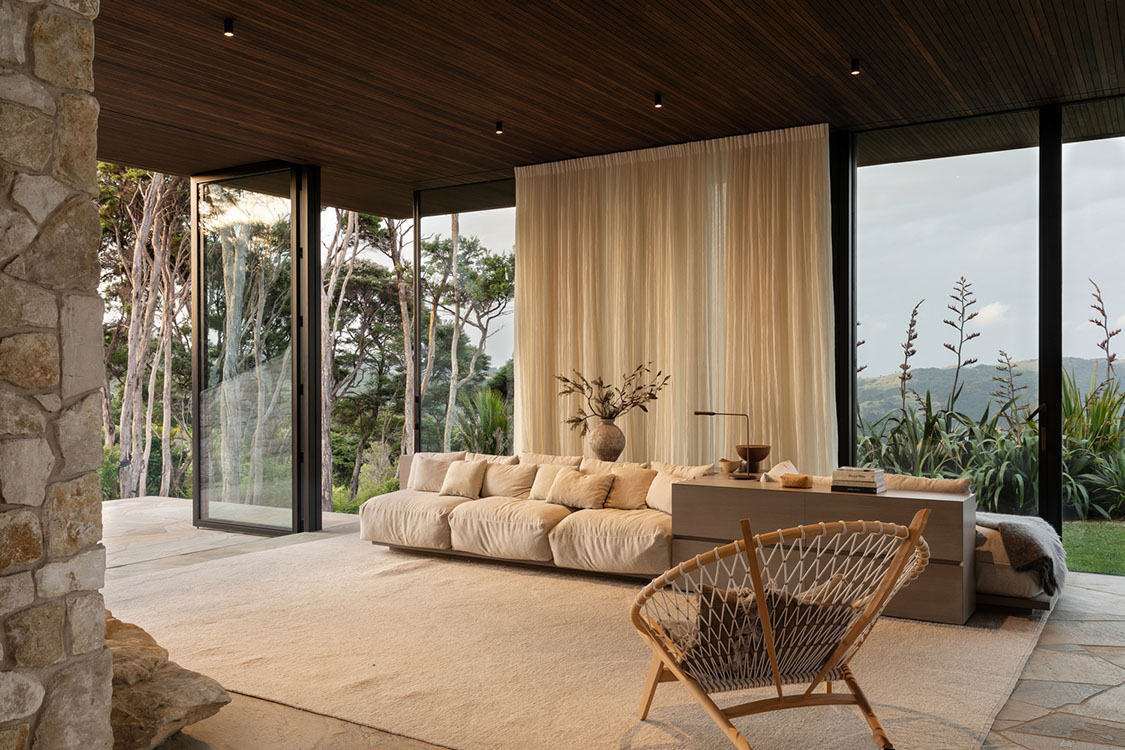 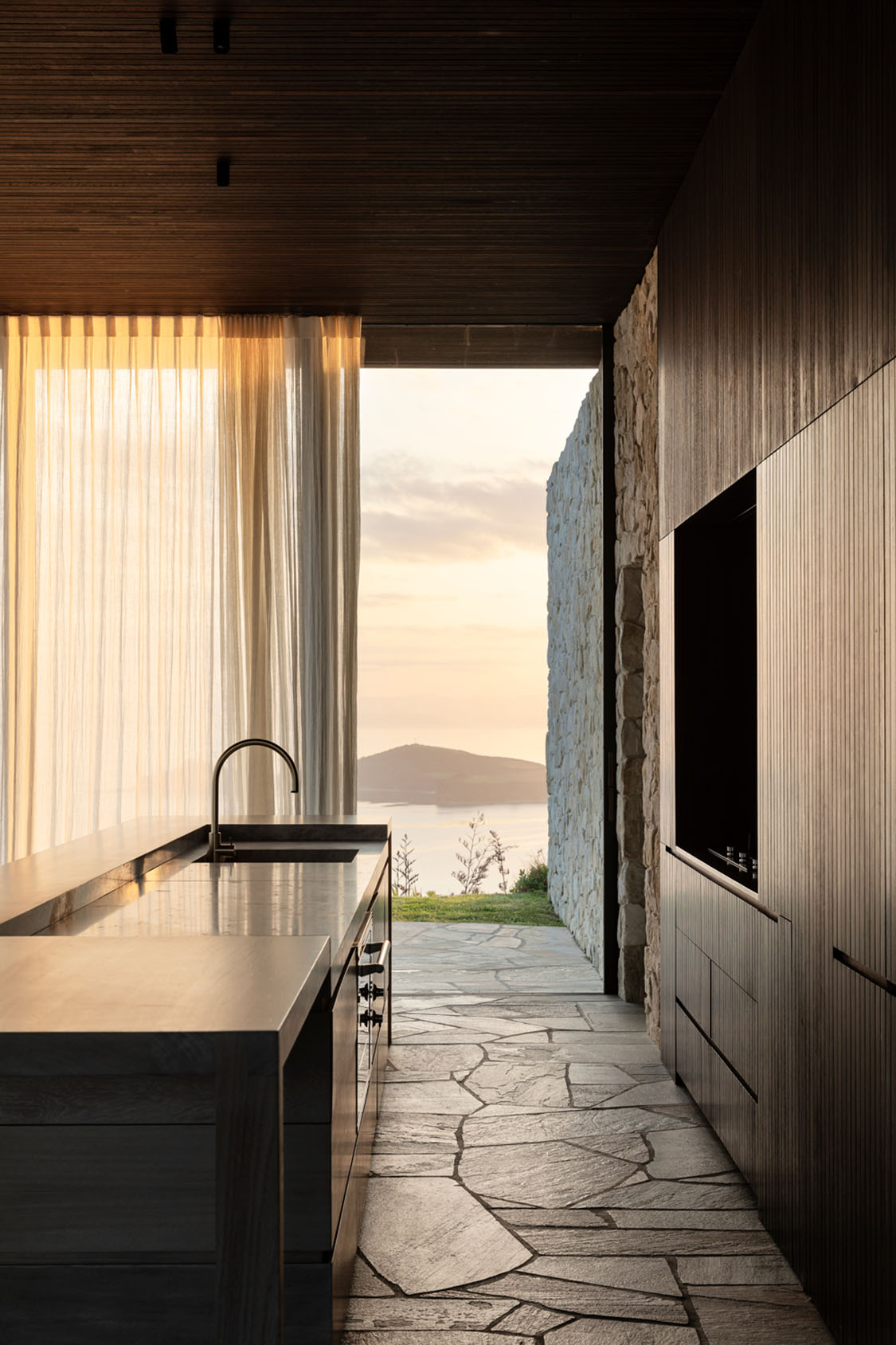 After a long process of discovery and 30 variations on the themes they explored together, the family selected the 28th version. But, soon thereafter, the architects felt they had found an even better solution, and proceeded to convince the client that this was the ideal one. 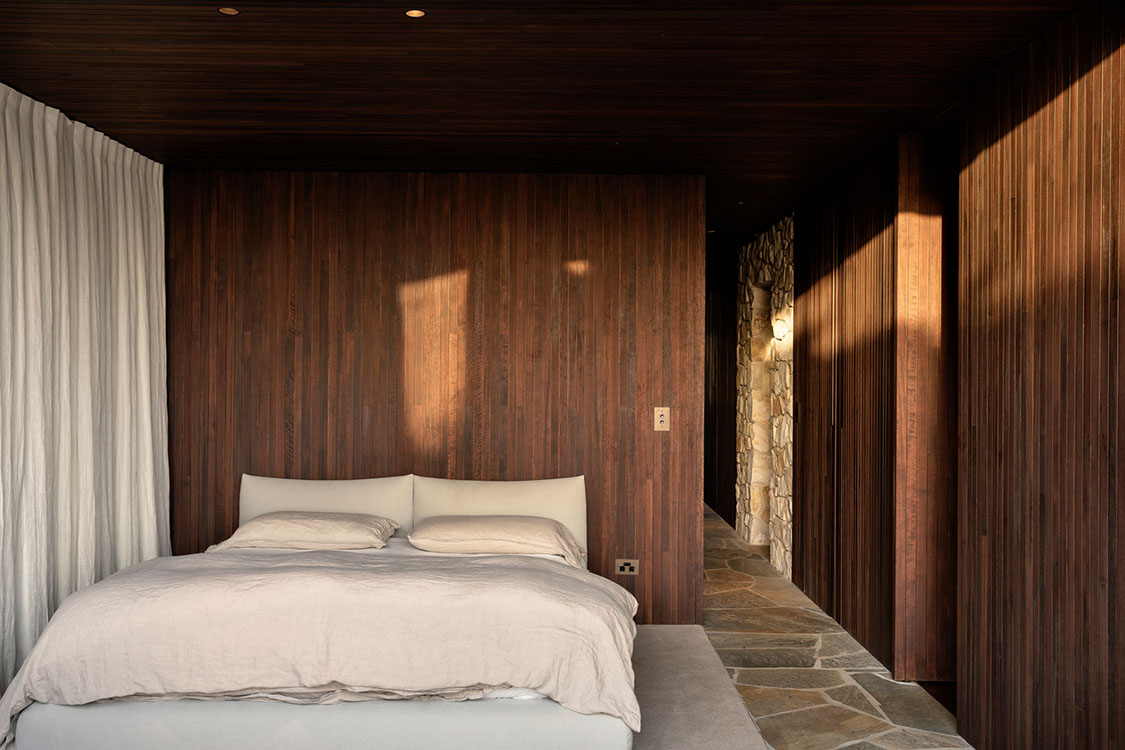 And so, version 31 is the two-volume house they have now built. The clients wanted to focus on their family’s needs and keep all of the supporting spaces and functions at a minimum. The architects use words such as monastic, archaic and control as they describe the house. Every single space had to have a clear reason to exist, nothing was added just for the reason that they could. 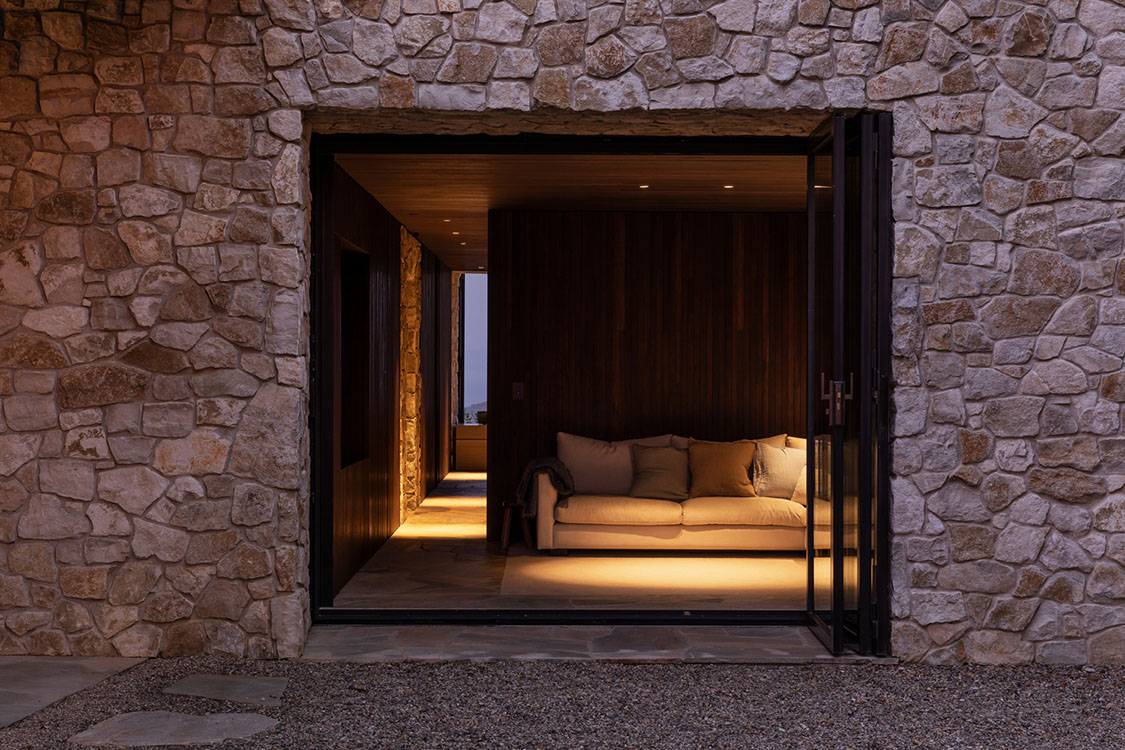 Natural, traditional materials, especially stone, timber and brass, give the house a timeless and permanent feel. It doesn’t look startlingly new or out-of-place and there’s an overall sense of calm and purpose, discovery and harmony. 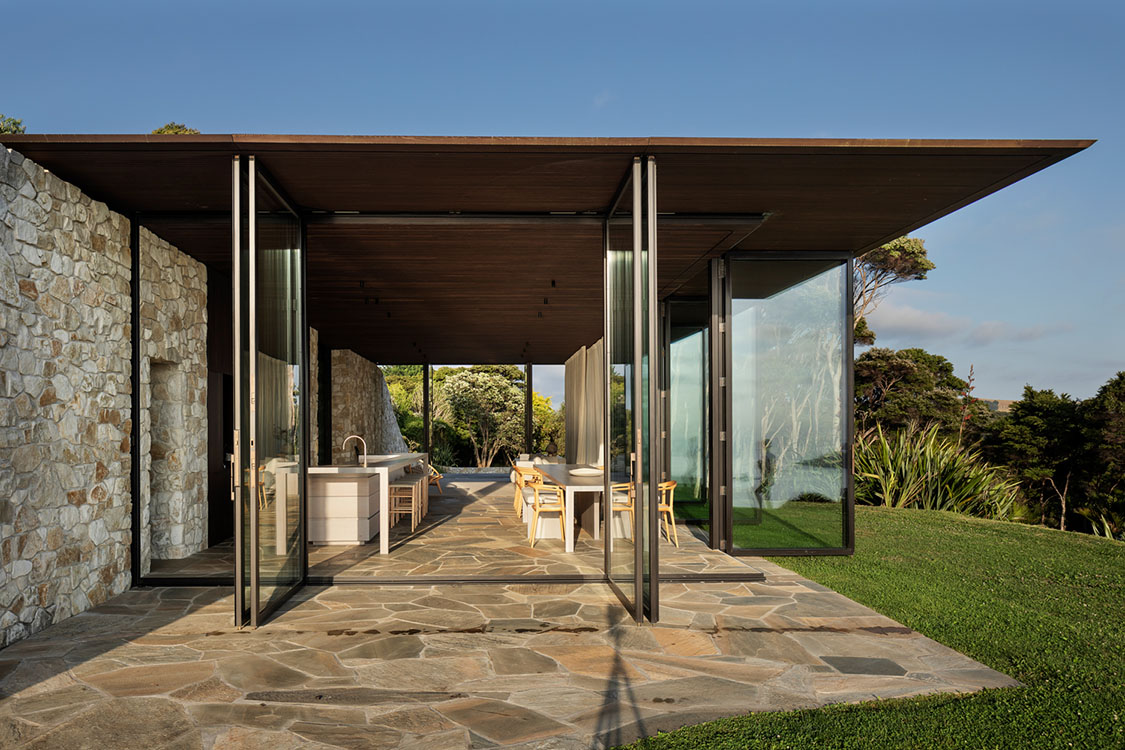 The pavilion overlooking the bay provides the living and dining areas. It is open and glazed on three sides, with the views as the key focal point. The two pavilions are separated by a stone wall and a narrow passage. The more private areas – two bedrooms and the bathrooms – are located in the second, land-facing pavilion with lower ceilings and less light in order to provide more cozy comfort. 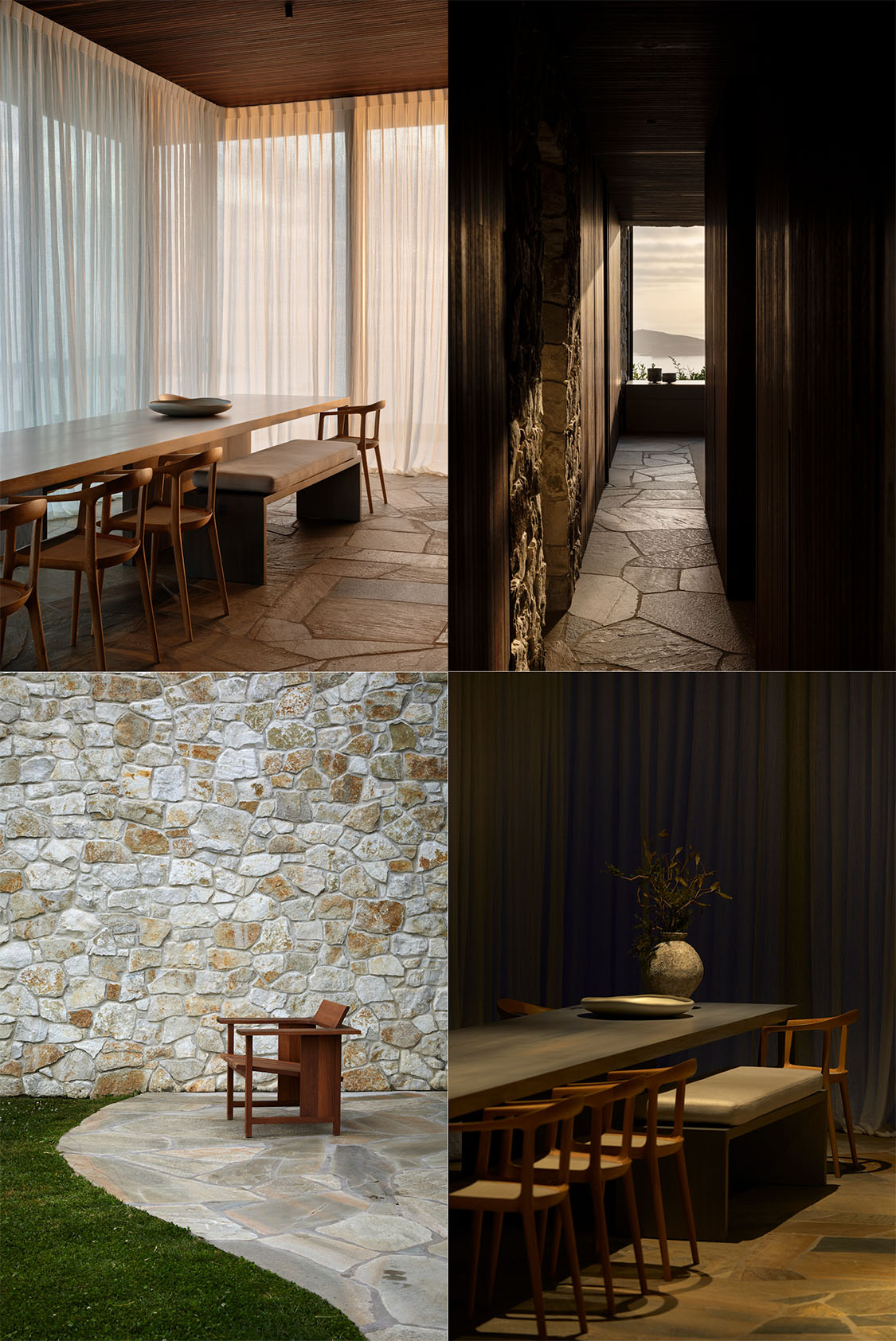 The architects have been quoted as saying that the house is at its core “a cave with a tarpaulin or some palm fronds propped up in front.” The architects described the idea to the clients in this way as well, that it was like a cave where they could sit at the open cave mouth and build a campfire, and then go deeper into the cave to sleep and retreat from the elements. The new house is a skillfully executed and spectacularly understated interpretation of this lovely idea, Tuija Seipell 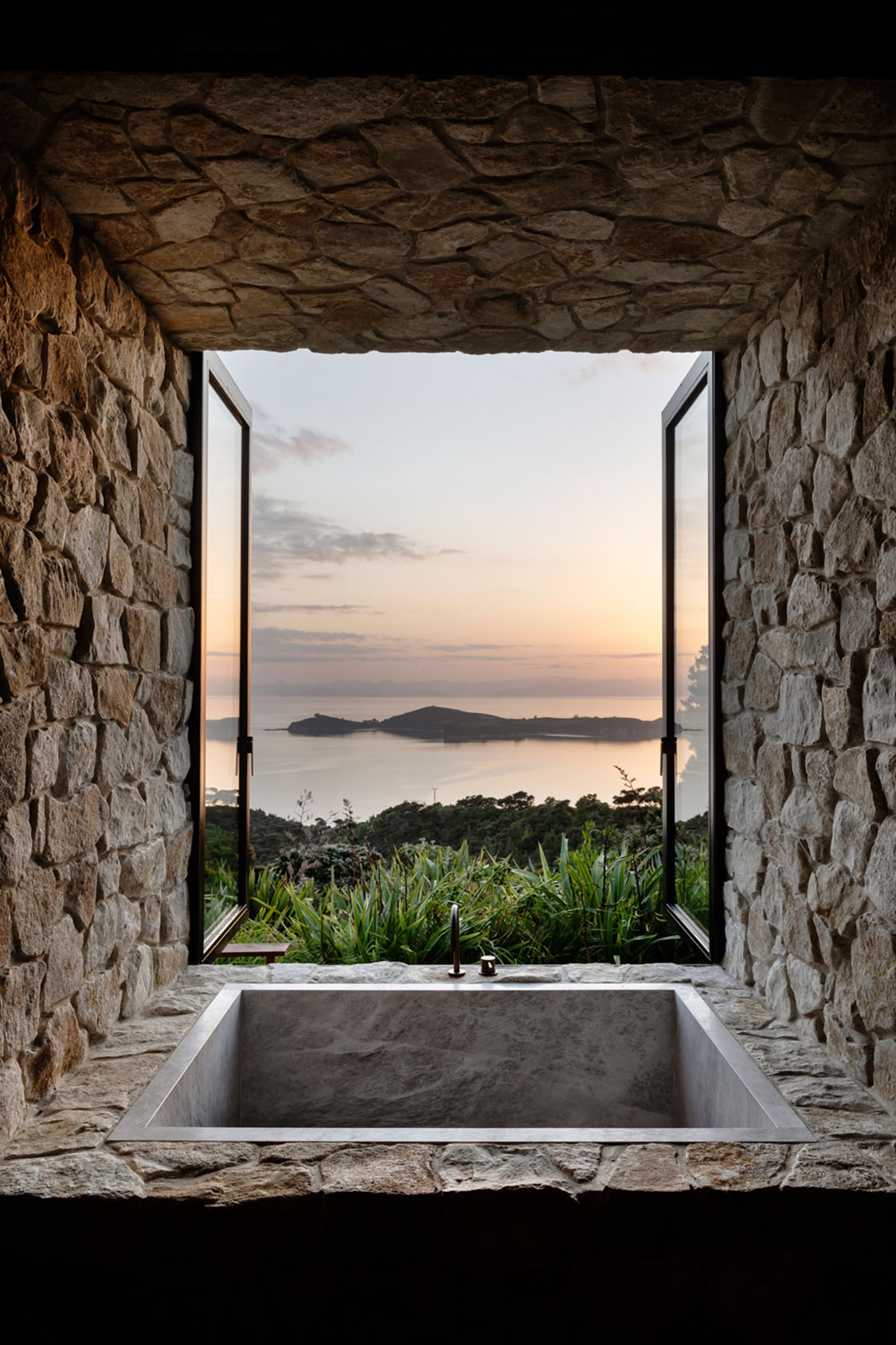