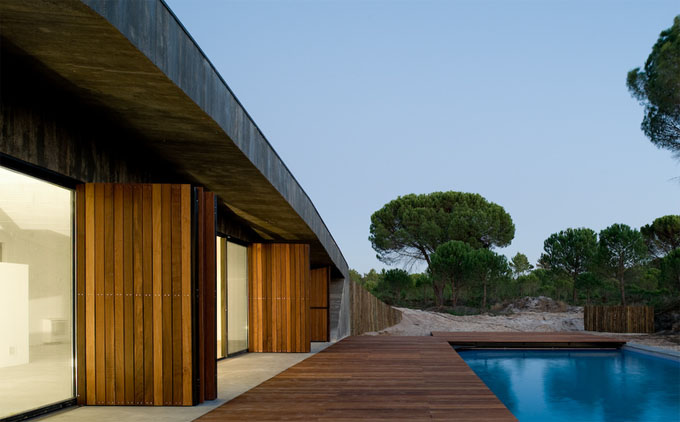 Casa Monte na Comporta in Grândola, Portugal is a house that sits in its surroundings as if it had always been there yet it also manages to look completely fresh, cool, new and spectacular.

The house’s undulating shape echoes the gently sloping sand dunes, and its hard and angular surface planes contrast beautifully with the rounded shapes of the surrounding trees. 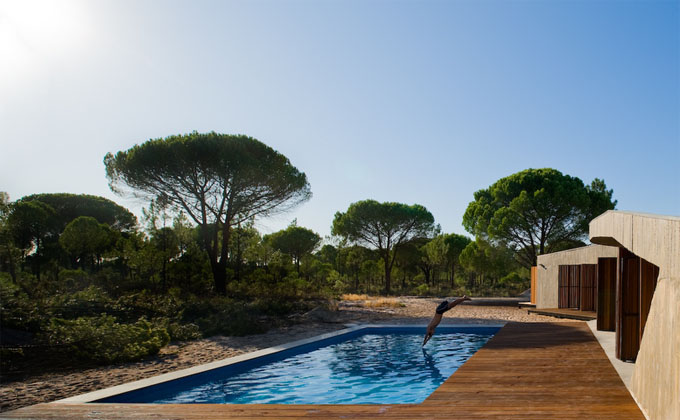 It has a bunker-like feel but it really does not look like a bomb-shelter because the exterior is broken into smaller sections with varying materials. The sky, the trees and the water in the pool provide all the color. Tactile texture is everywhere, inside and out. Light and shadow become the main players. The entire dwelling exudes organic calm. 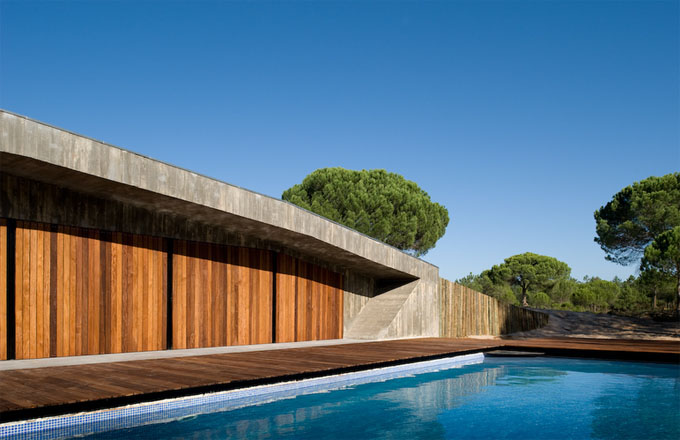 Although it seems so, this house was not built into existing dunes. The exact opposite happened. Luis Pereira Miguel and team at Lisbon-based Pereira Miguel Arquitectos, built the dunes so that they could situate the house under them. 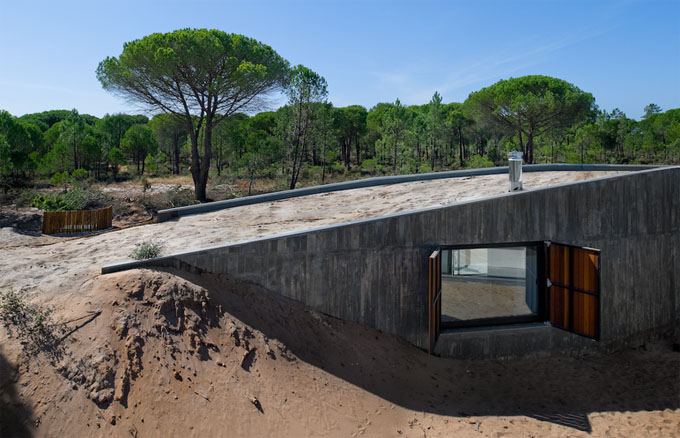 Pereira Miguel is a multi-disciplinary firm — architecture and interiors, commercial and residential — that works with various collaborators in Portugal and around the world. The seamless conversation between nature and house, surroundings and building is a theme visible in many of the firm’s projects but none as distinctively as in the Dune House. 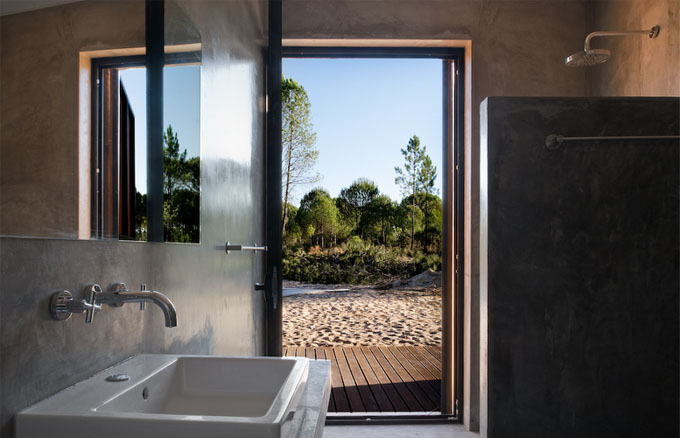 The two crescent-shaped Barchan dunes that the architects created hide the house under a road. Eventually, it will look like the sand, the house and the wind have coexisted here forever. In a hundred years, it may look like some secret hub of notorious infiltrators or perhaps it we look more like a dwelling of friendly earthlings. Already the house shows a delicious hint of ancient cave and that aspect is going to get better and better after years of wind and weather action. 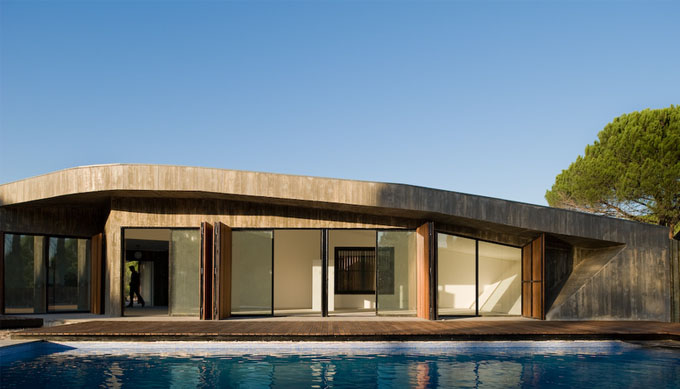 If you were able to look at the footprint of the house from the sky (and you are not, because it is partly under the sand), you’d realize that it consists of four slightly angled ‘arms,’ almost like a wonky letter X with each section housing a separate function. 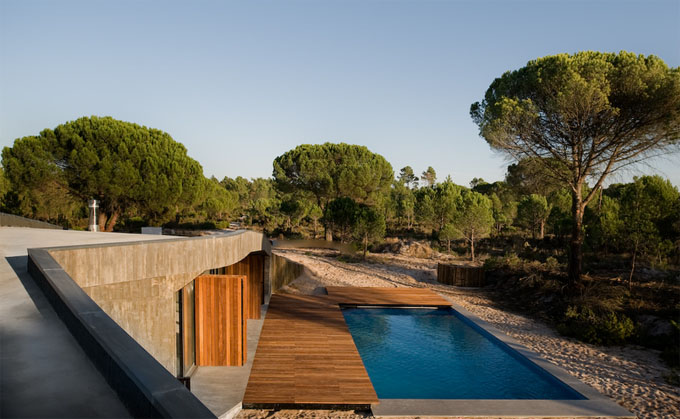 From each section, the view and feel are different from the others. With the constant action of the forces of nature, the view will also shift year by year, season by season, inviting contemplation and creating harmony. 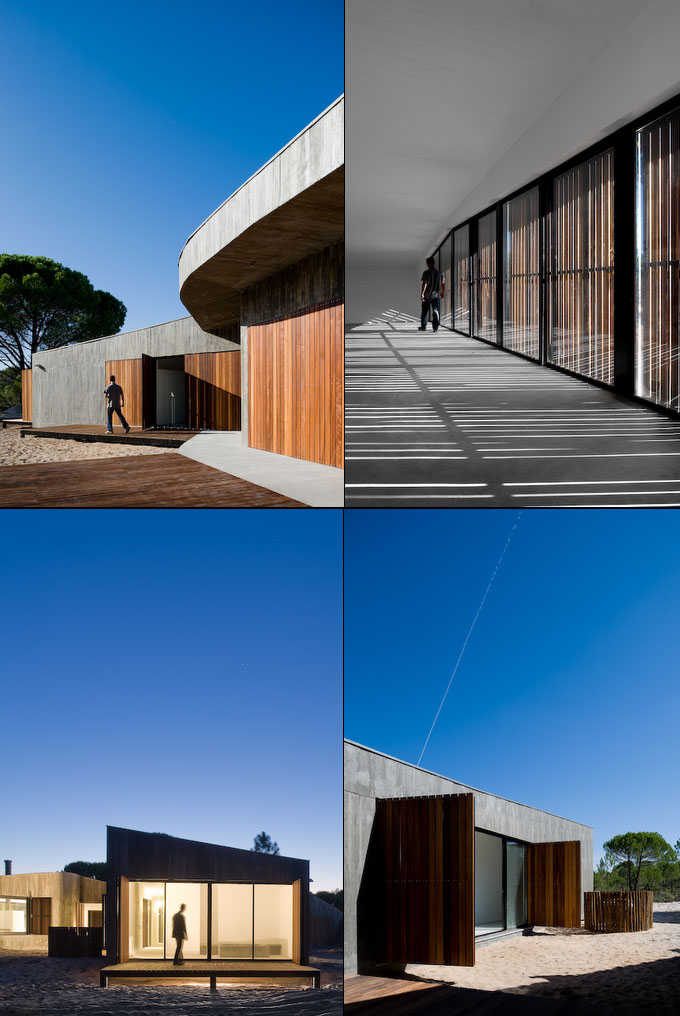 Completed in late 2008, Casa Monte na Comporta in Grândola is, not surprisingly, drawing attention. It will be featured on Portuguese cable television this month and it will most likely be popping up in many design and architecture magazines in the coming months. That someone (other than me) is lucky enough to live in this house is almost too much to bear. – Tuija Seipell 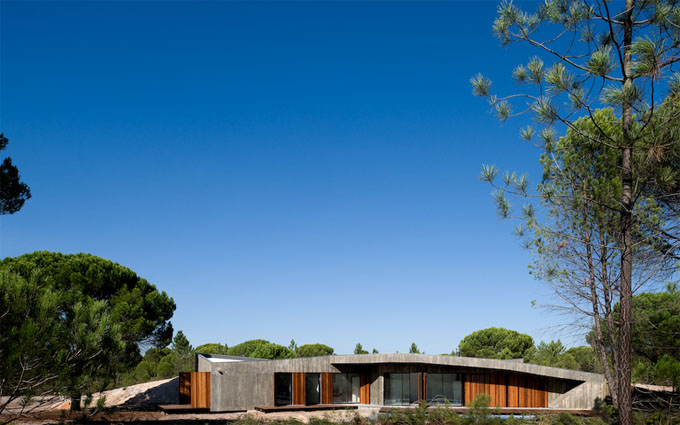