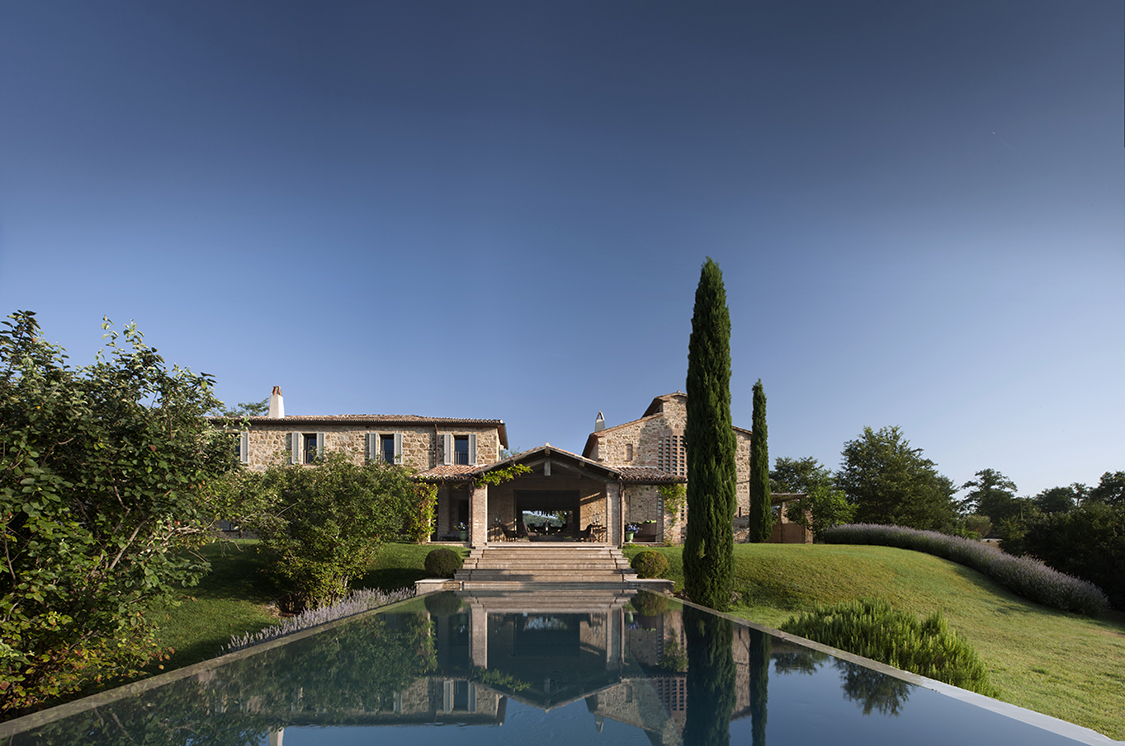 Six years have elapsed since we last had the pleasure of visiting one of Italy’s most exclusive and best-kept secrets, Castello Di Reschio, way back in 2013 . With so much time having passed we were excited and curious to see just how this estate had evolved over the intervening years. 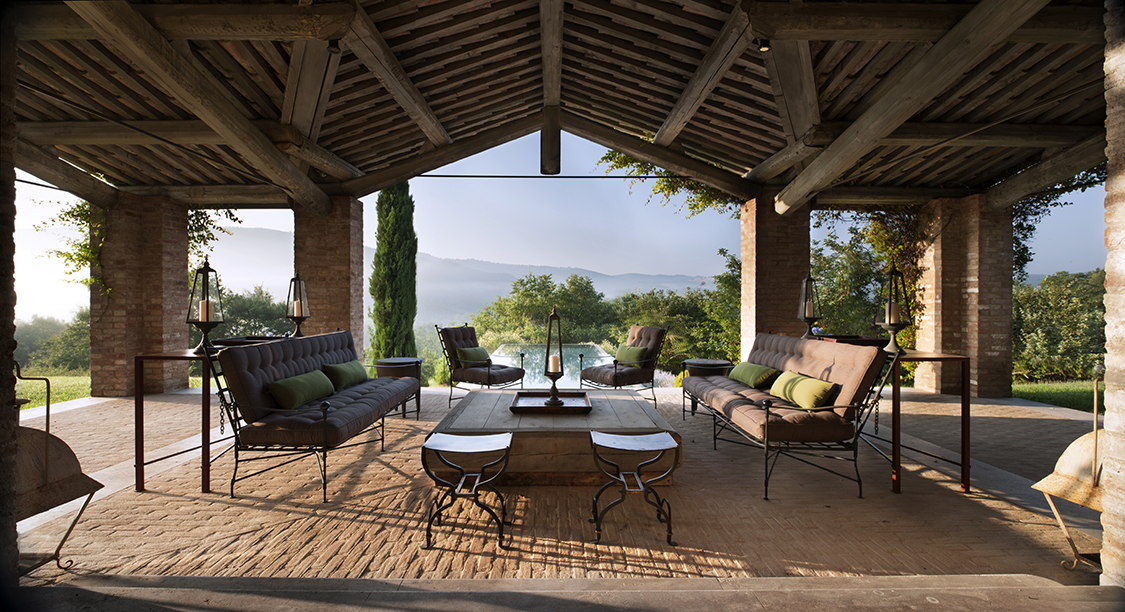 To briefly recap, Castello Di Reschio was formerly the fiefdom of the Bishop of Todi located on the Umbrian side of the border between the then Papal States and the former Grand Duchy of Tuscany (The opposing Tuscan Castle can be glimpsed from the highpoints of the estate over the road which now demarcates the border between the two regions). After the collapse of the tobacco industry which once dominated this pocket of Umbria in the mid-twentieth century, the estate would go into a period of economic decline which would see much of the property’s 2,700-acres of farmland return to a state of semi-wilderness, its 50 outlying farmhouses all fall into various states of disrepair and it’s fortified Borgo would become a dilapidated near-ruin. At least, that is, until 1994. At this time the estate would be purchased by Count Antonio Bolza who would embark on setting the property upon a very different trajectory and begin the long process of restoring and regenerating the land and its dependant buildings into the remarkable estate it is today. 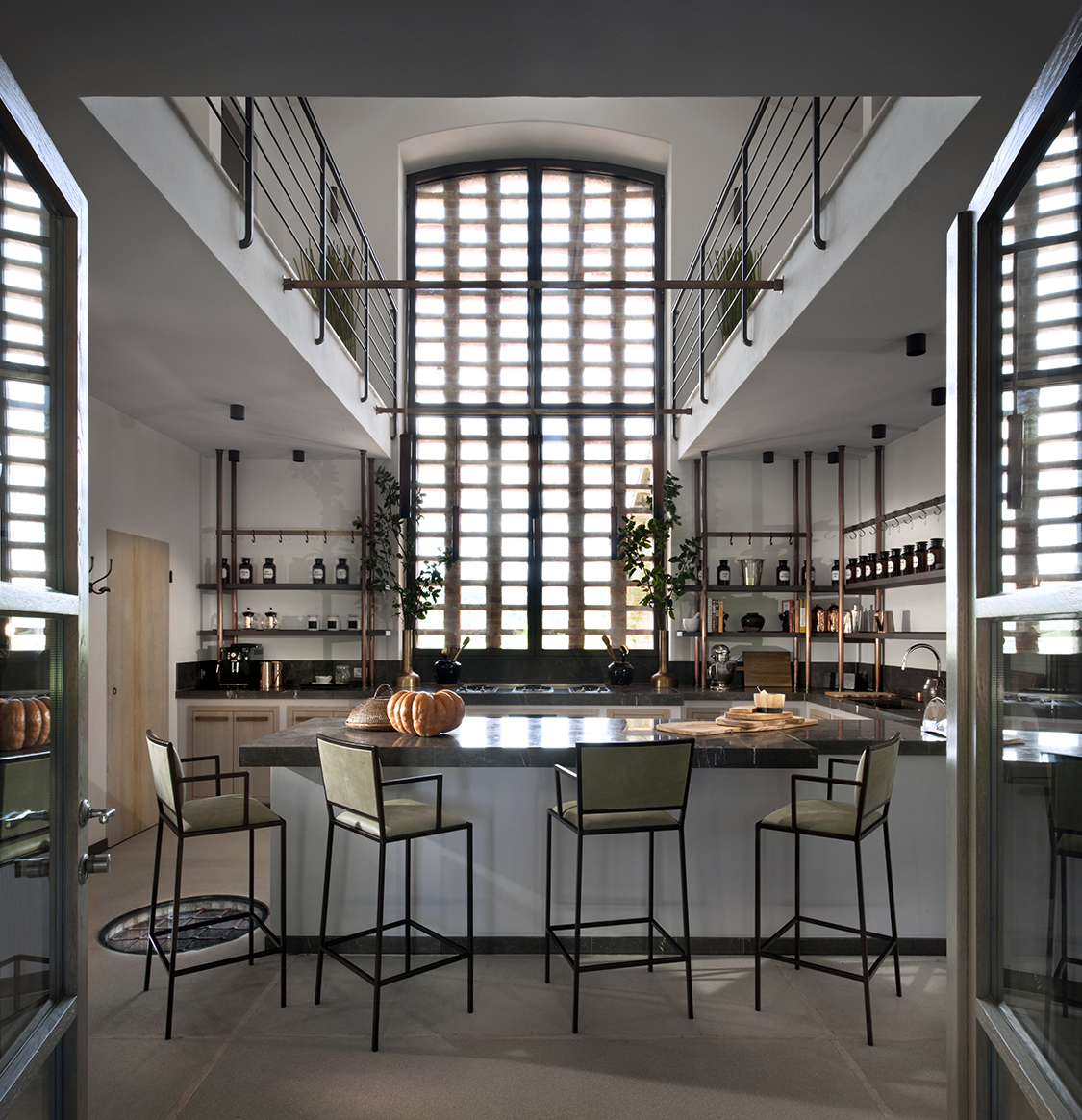 After graduating from architecture school in London, Count Antonio’s son, Benedikt Bolza (also Count Bolza), would soon take up the baton from his father and would stamp his own impressive mark onto the grounds. One by one the homesteads of the estate would be restored and rebuilt into luxurious accommodation for discerning new owners from around the world, transforming them into idyllic holiday homes set in the golden afternoon light of the iconic Italian countryside. Count Benedikt would fuse master Italian craftsmanship with his own distinct vision for each unique residence on the grounds, designing engineering marvels like the monastic-like underground wine cellar of ‘Casa Delle Suore’, to the grand hand-carved travertine cantilevered spiral staircase of ‘Palazzo’. No detail escapes Count Benedikt’s attention, everything from light fixtures to furniture are all designed to his exacting specifications. 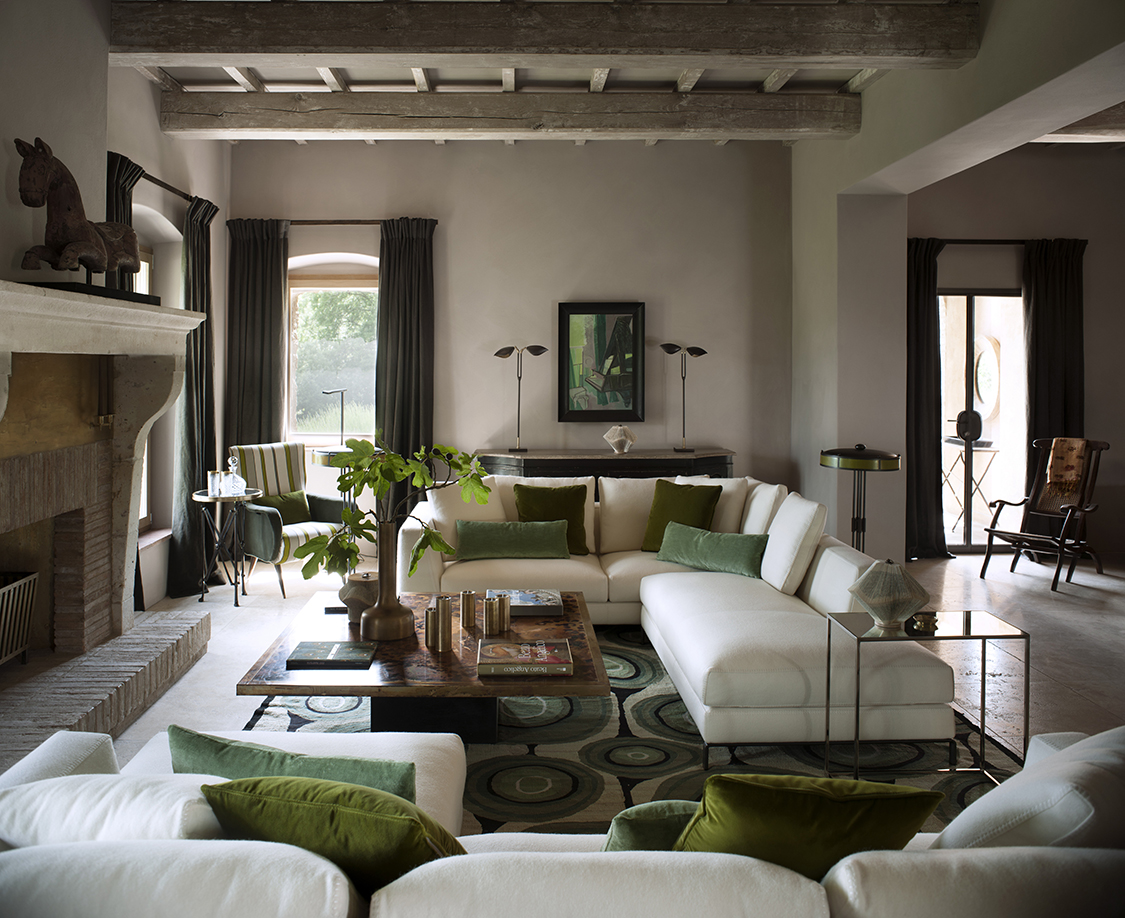 And it’s this extraordinary singular vision, this commitment to creating something truly special, which sets Reschio apart. This monumental project of transforming the immense estate is made all the more exceptional by the knowledge that this is, first and foremost, a family-run affair, an idea passed down between generations. 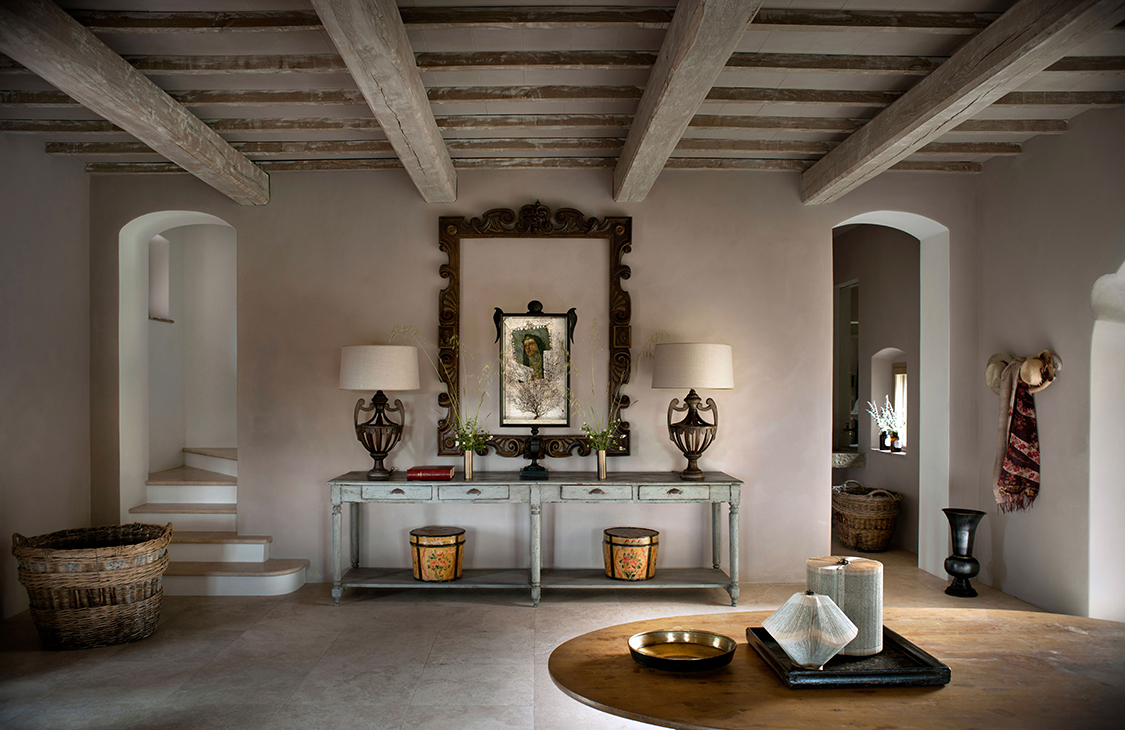 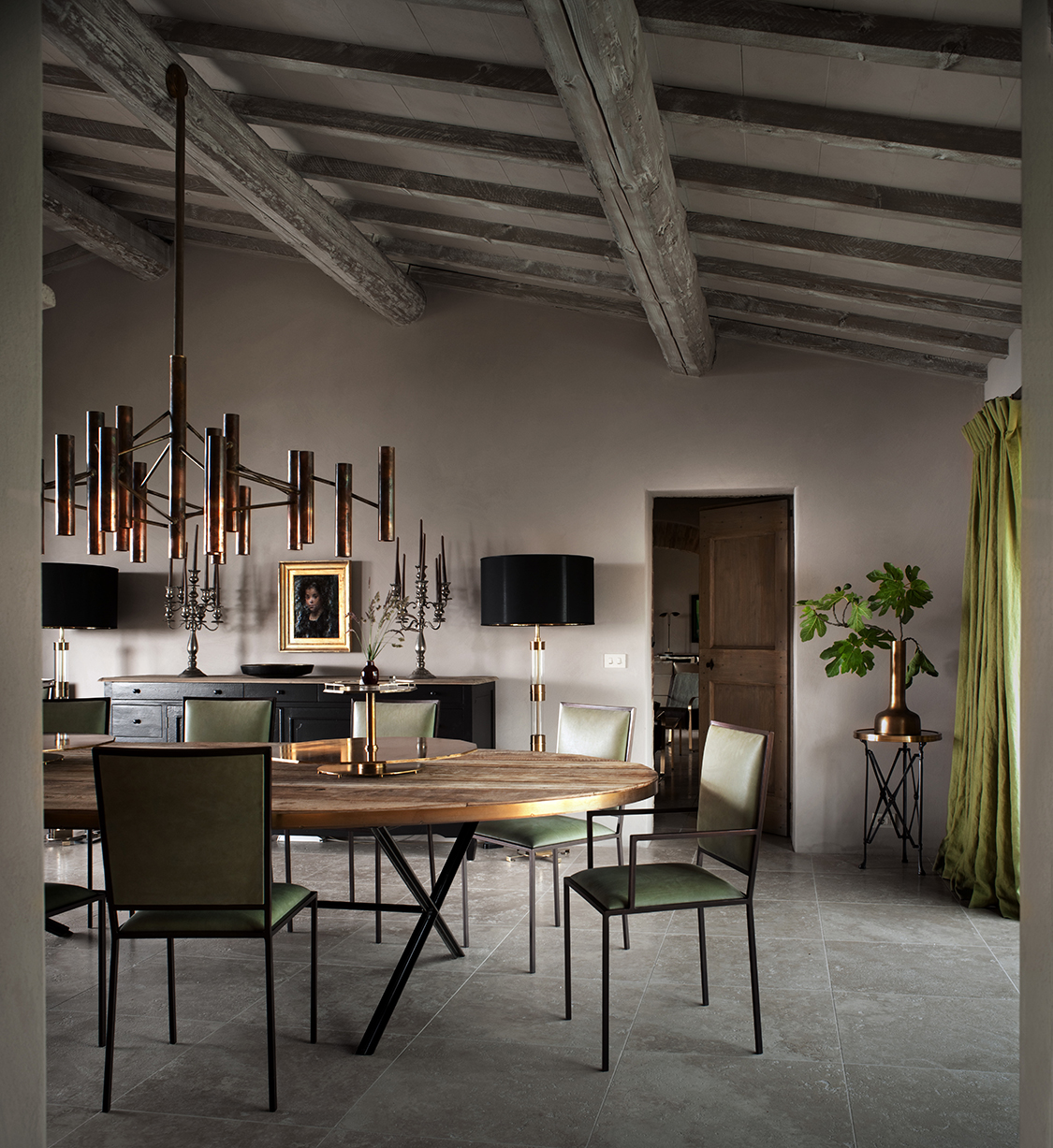 Of the 25 homes on the estate which have been restored and converted into luxury Tuscan-style villas there are ten available to hire when the owner-families are not in residence. The newest of these transformations is the recently completed ‘Casa Delle Suore’. In this property Count Bolza achieves new levels of refinement as he appears to hone his craft with each new build. 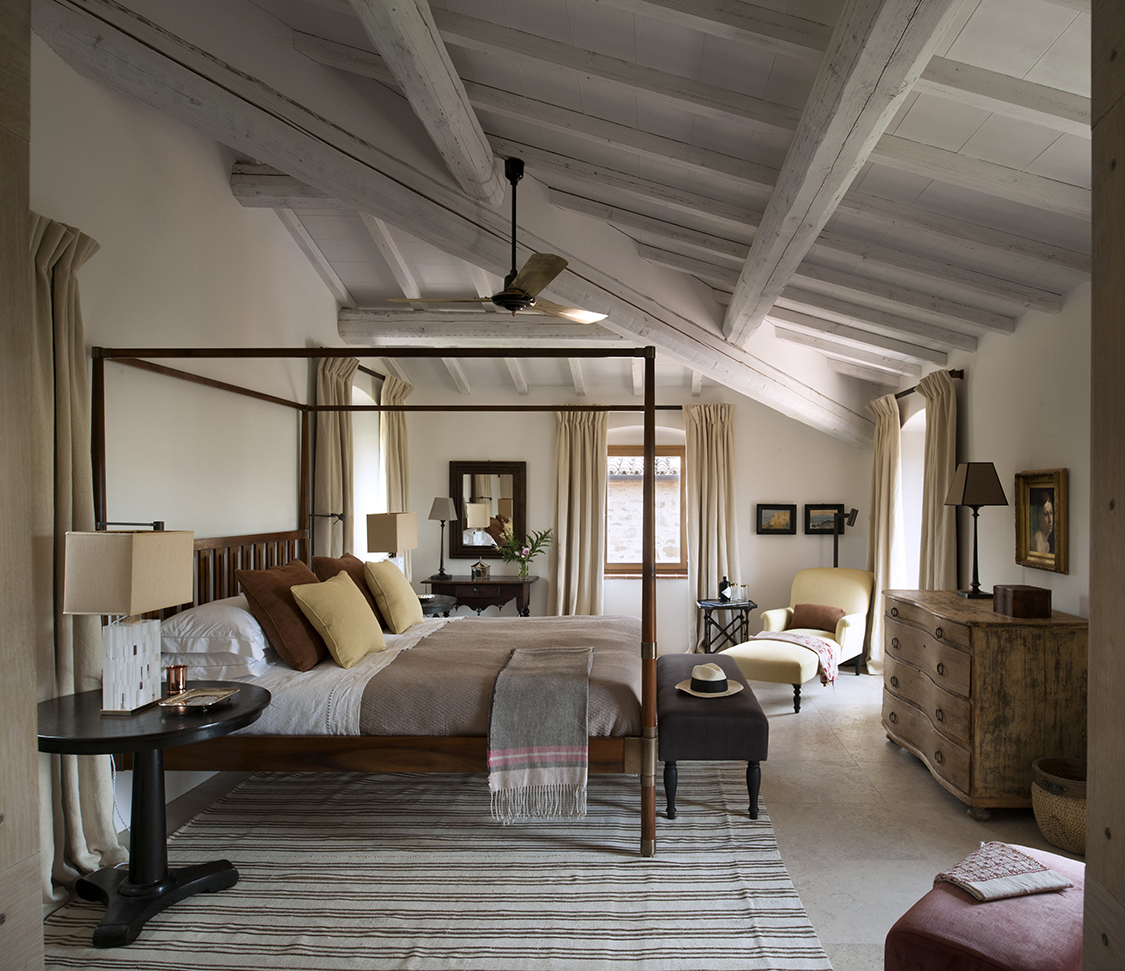 Thought to be a former nunnery, the ‘House of the Sisters’ is set in an exceptionally private pocket of the estate. Re-orientating the original inward-looking courtyard-style compound (unique on the grounds of Reschio) outwards, Bolza has designed ‘Casa Delle Suore’ to take full advantage of the sweeping surrounding views of the Umbro-Tuscan landscape. Allowing light to flood in, each window frames a picture-perfect moment of golden fallow fields alternating with rolling wooded hills. 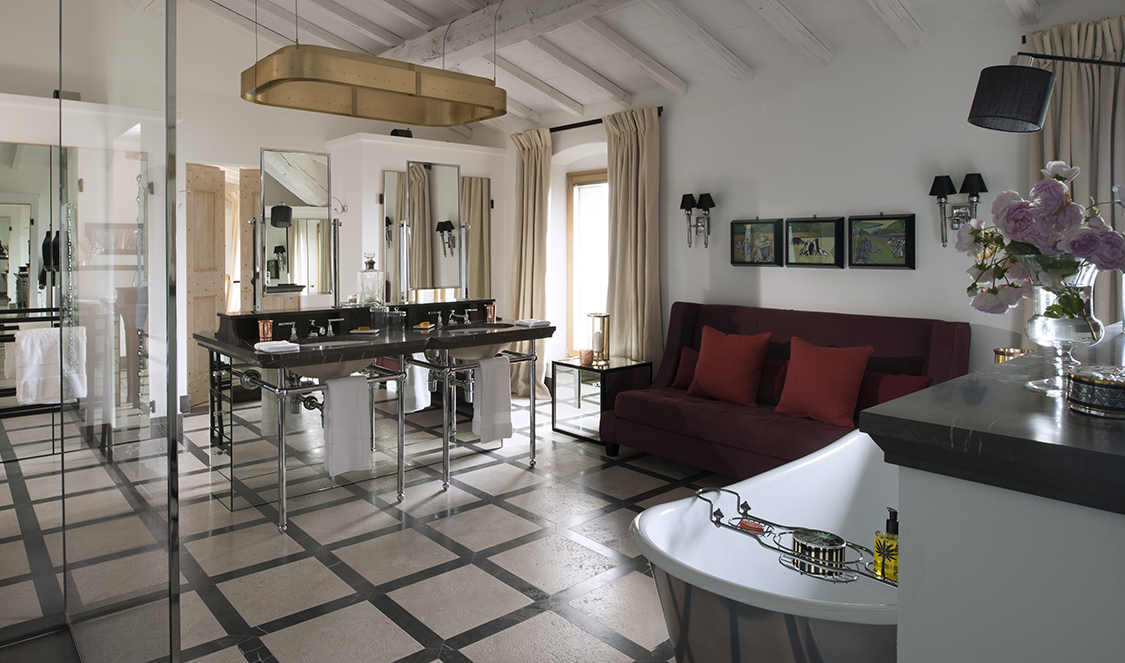 Particularly inviting is the 16m x 4m swimming pool featuring gently cascading water down the shallow stone steps leading from the pool lounge terrace and inviting guests into the infinity-edged pool below overlooking the rest of the estate. 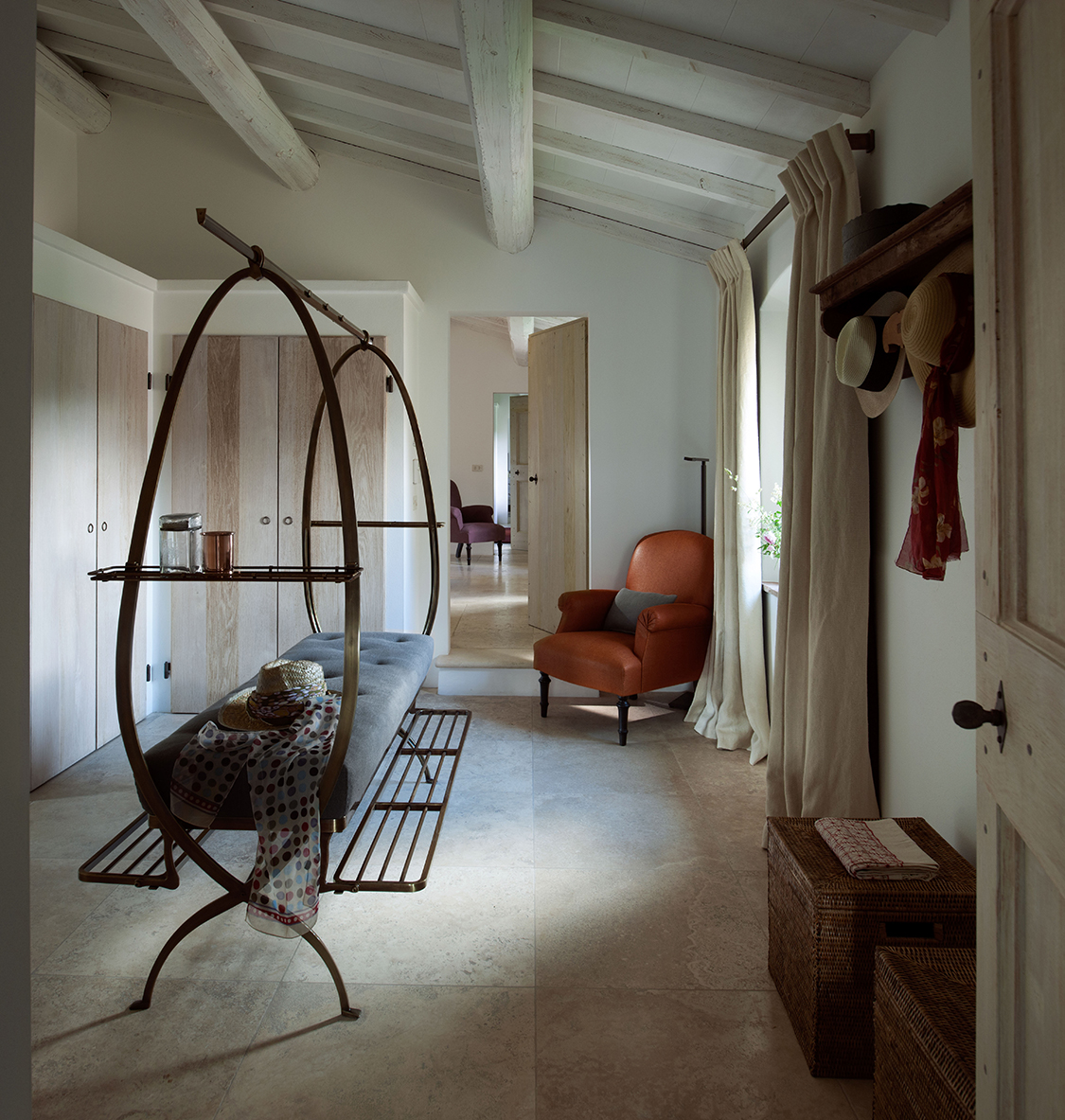 Another intriguing feature is the aforementioned underground brick domed wine cellar. An almost meditative sensation comes over as you descend into the dimly lit cool and calming space. Although built to keep wine at a perfectly even temperature year-round, one can’t help but be drawn to this space and feel tempted to enjoy a glass of good wine, or whiskey, in this very location. Stunningly appointed throughout with bespoke furniture designed by Count Bolza himself, the house is studded with unique pieces sourced from the antique markets of Parma and innovative design features crafted from salvaged elements of the original structure. In this way ‘Casa Delle Suore’, while boasting every possible modern amenity, still preserves something of the character of the old building’s past, epitomised in the great care taken to preserve the two ancient mulberry trees which greet guests as they enter the courtyard. The lasting impression left by Reschio is one of renewal and continuation. What was once found in a state of near-ruin has now been re-purposed and has found a new incarnation. And in that same spirit of renewal ‘Castello Di Reschio’ is about to embark on yet another transformation, the culmination of years of planning and work and probably the crowning moment of the original idea to purchase the land, as the Borgo itself, the focal point of the Estate nears completion and conversion into a luxury boutique hotel. Scheduled to open in June next year (2020), the hotel will accommodate 36 rooms. Fortunately, we were treated to a guided tour of the worksite to inspect the facilities being retrofitted into the medieval fortifications of the Borgo along with an inspection of the workshops where the hotel’s future furniture and fittings, even art is being designed made and/or collected. To say we’re excited to see Count Bolza final vision fully realised would be an understatement. More to come on this next year. Also within the grounds of the Estate is the new and exquisitely designed ‘Ristorante alle Scuderie’, a restaurant and bar recently opened in June this year (2019) which will serve as a destination restaurant for the region and will be open to not just the Estate homeowners (or their renters), or future hotel guests, but also to the general public. Showcasing produce sourced from the restored farmland of the property and its surrounding local region, including Reschio’s own olive oil and wine, the restaurant, coupled with the hotel will represent the final transformation for Reschio, from exclusive Estate which only a very select few could experience to inviting a wider audience to sample the Bolza family’s curated slice of Umbrian paradise.  Bill Tikos.