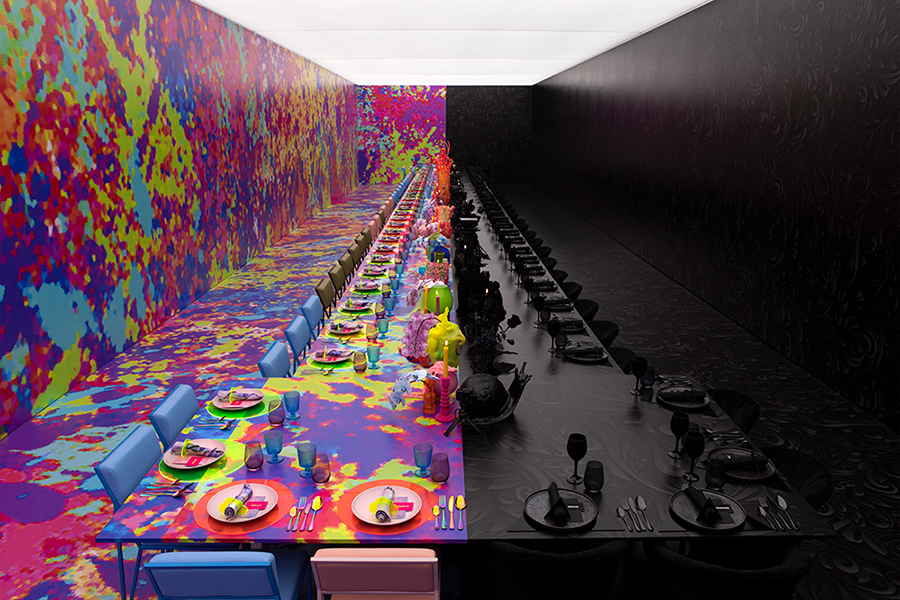 In many cultures, weddings are colourful affairs with costume changes and other colour-adding traditions dating back hundreds of years. In the Westernized world, however, weddings usually bring up visions of a lacy white bride and a black-suited groom. Lots of white flowers, gauze and princessy embellishments. 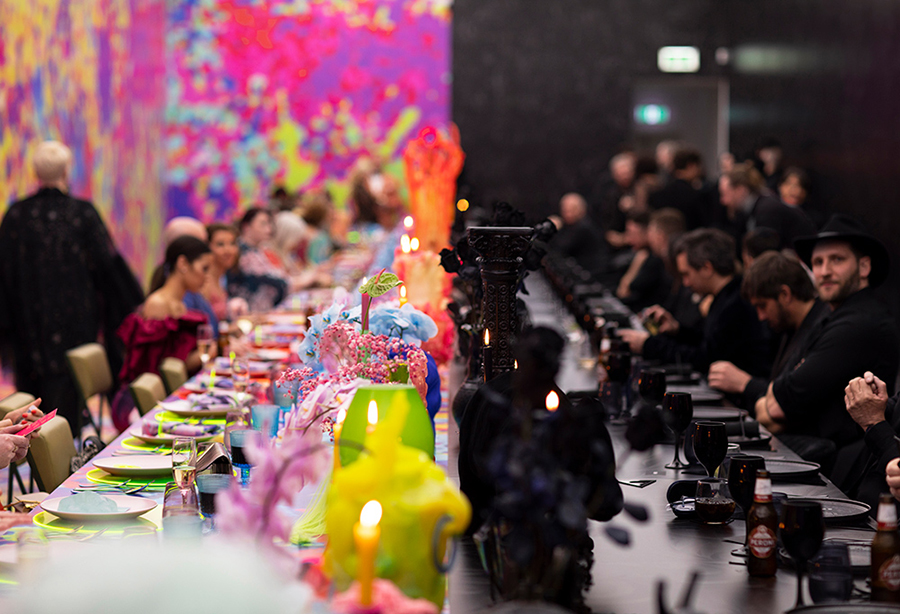 Weddings are big business with various sources reporting that in 2018 the average wedding in the U.S. cost a staggering $32,000 – $44,000. And in the U.S. alone, the wedding industry is worth an estimated $72 billion while the global wedding market is an estimated $300 billion. 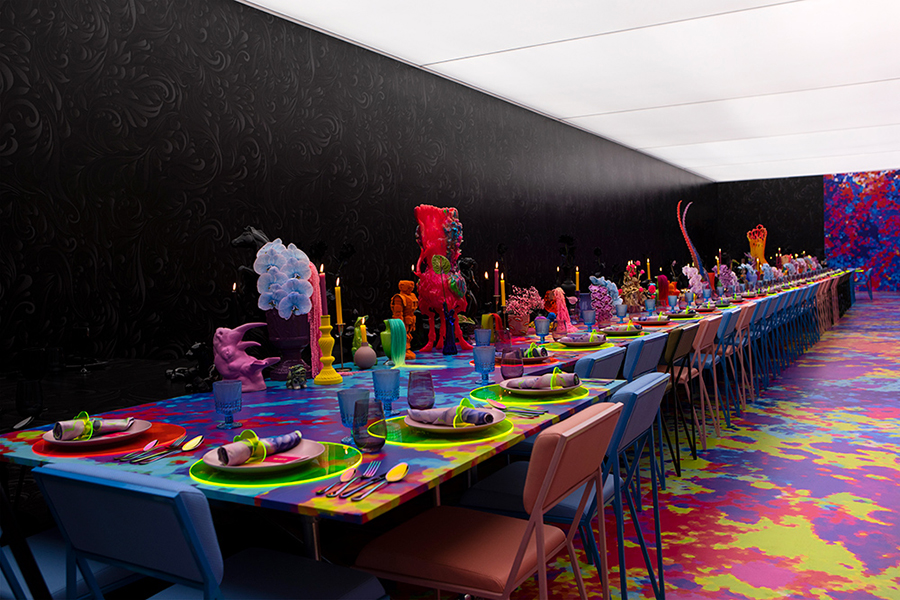 Big business indeed, with magazines, blogs and bridal shows fuelling the flames. So it is no wonder that even otherwise frugal couples seem to go crazy in their quest for the perfect fantasy wedding and that they generally opt for a white wedding. 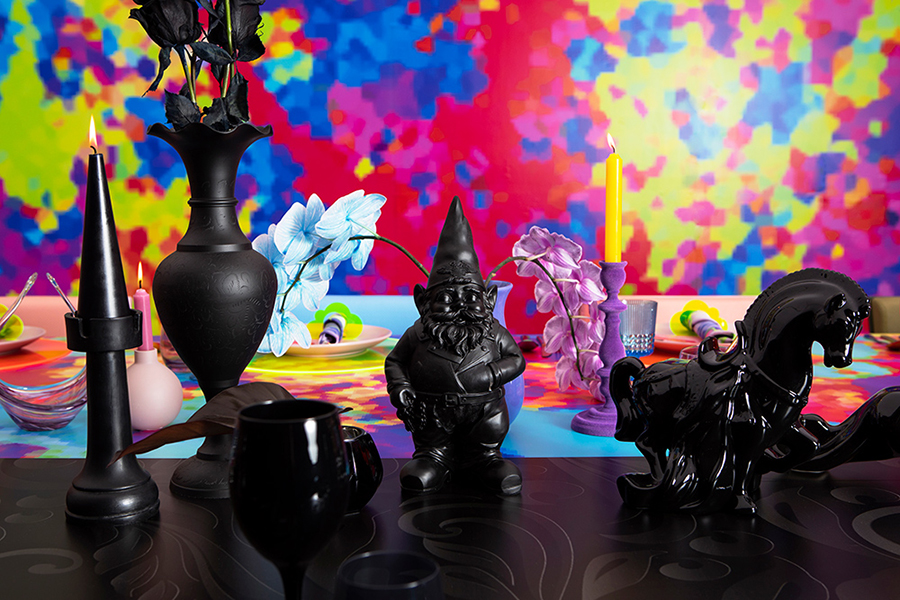 In this light, it is refreshing to see a couple deciding to go completely their own way with their event yet still manage to accomplish most of the things that weddings generally do – the ceremony with the dressed-up couple and their dressed-up guests, and a boisterous party afterwards. 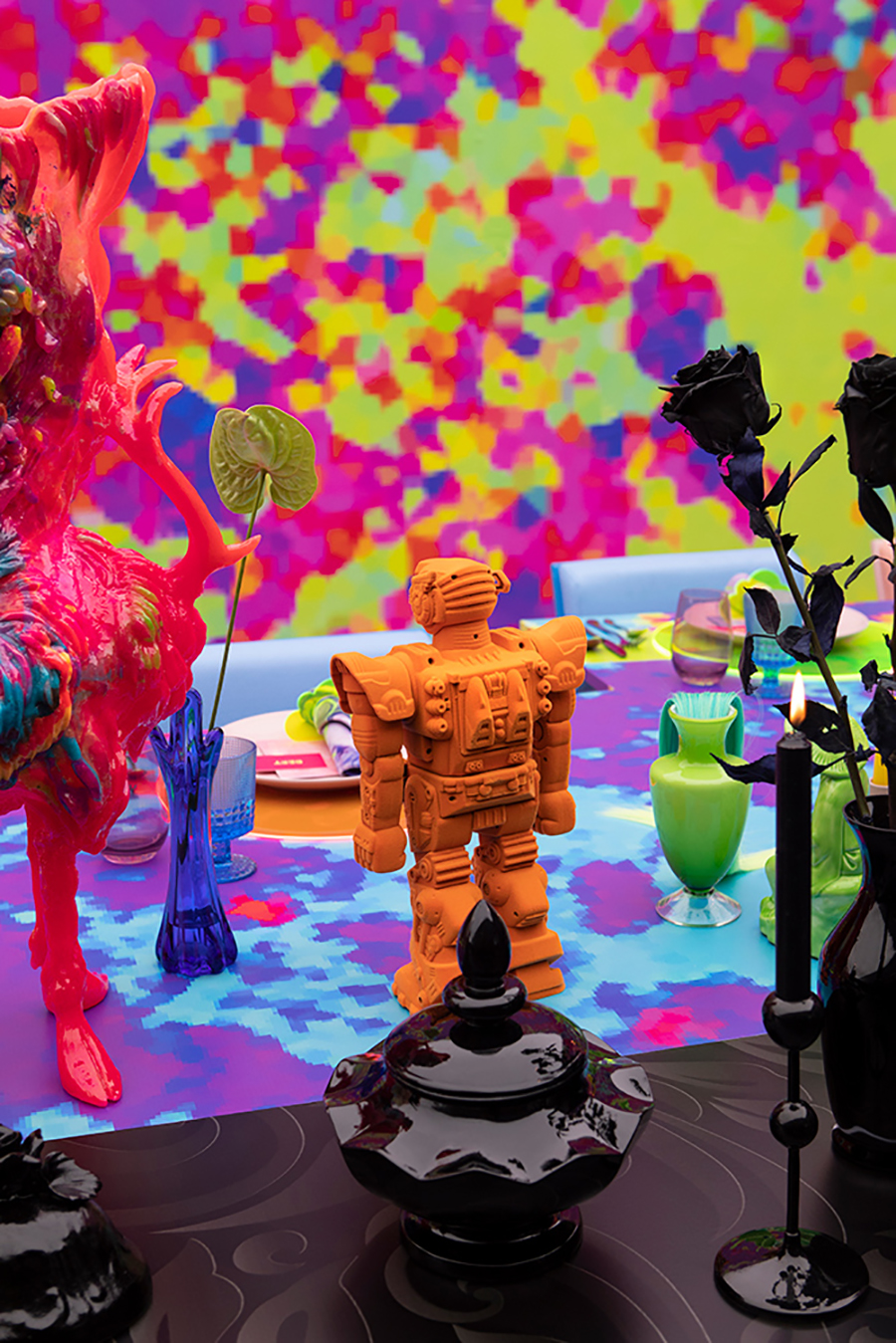 But for Von and Ryan Bishop’s wedding, there was no white. It was all black and bright colours to reflect their contrasting personalities. Von is all black, Ryan is all colour. 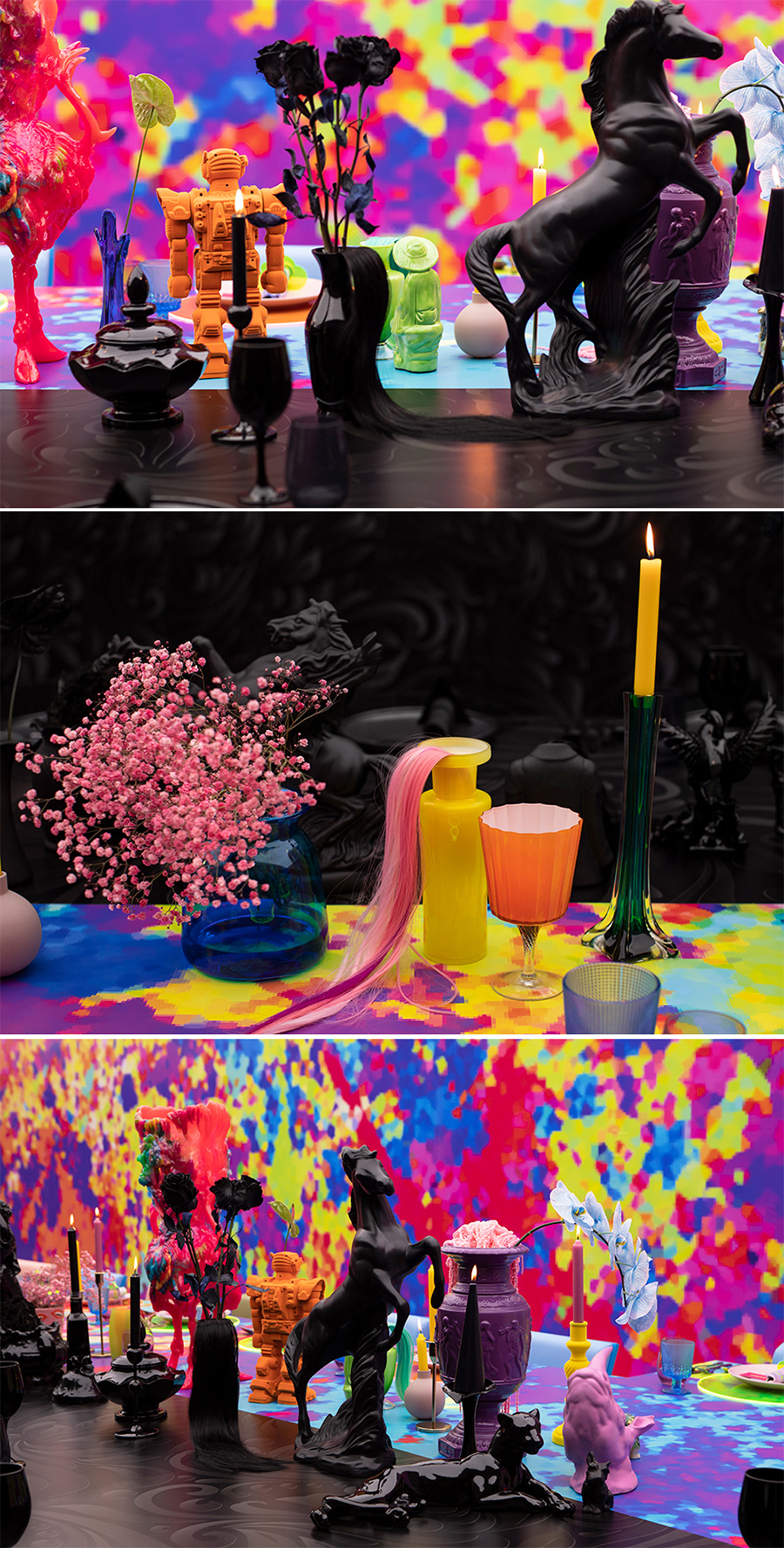 After knowing each other for 12 years, the couple got engaged last year and married this August. Initially they didn’t want a wedding at all, but then decided to please their parents and have a real party but make it into a bit of a work-related project, too. Von is a graphic designer and owner of Ivy creative. Ryan is a printer and owner of Boom Studios. Both are in Collingwood neighbourhood of Melbourne, Australia. 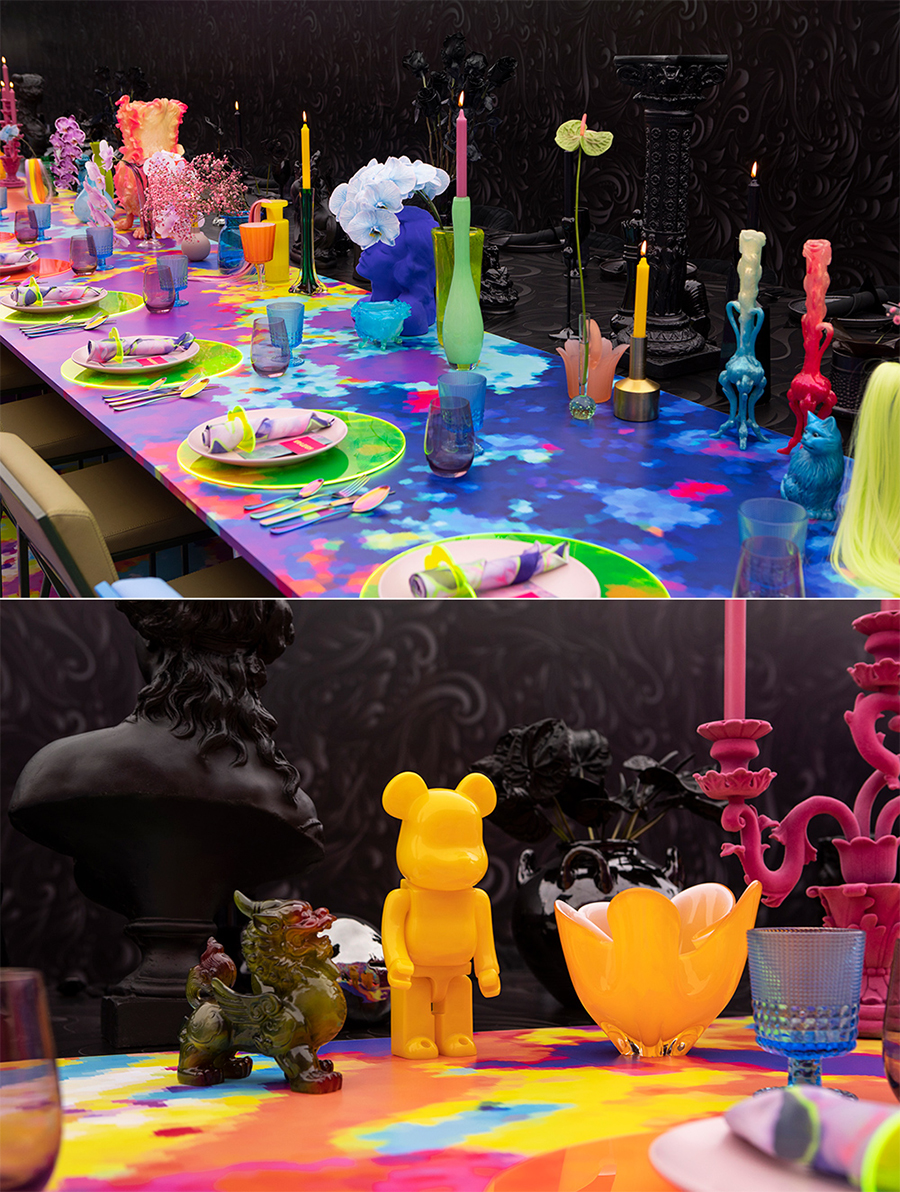 The project started with the two finding a space they liked, Neon Parc an art gallery in the Brunswick neighbourhood. It is not for rent but they managed to convince the owner that a wedding built for one night only is really an exhibition.

They set to work designing their wedding within the confines of the 30 x 7-metre (98.5 x 22 ft) empty, grey space. The concept idea was a collision of neon-bright colours against black. They build everything from scratch including a kitchen in the parking lot behind the gallery. Only a 23-metre (75 ft) table fit in the space so that determined the number of guests: 74. 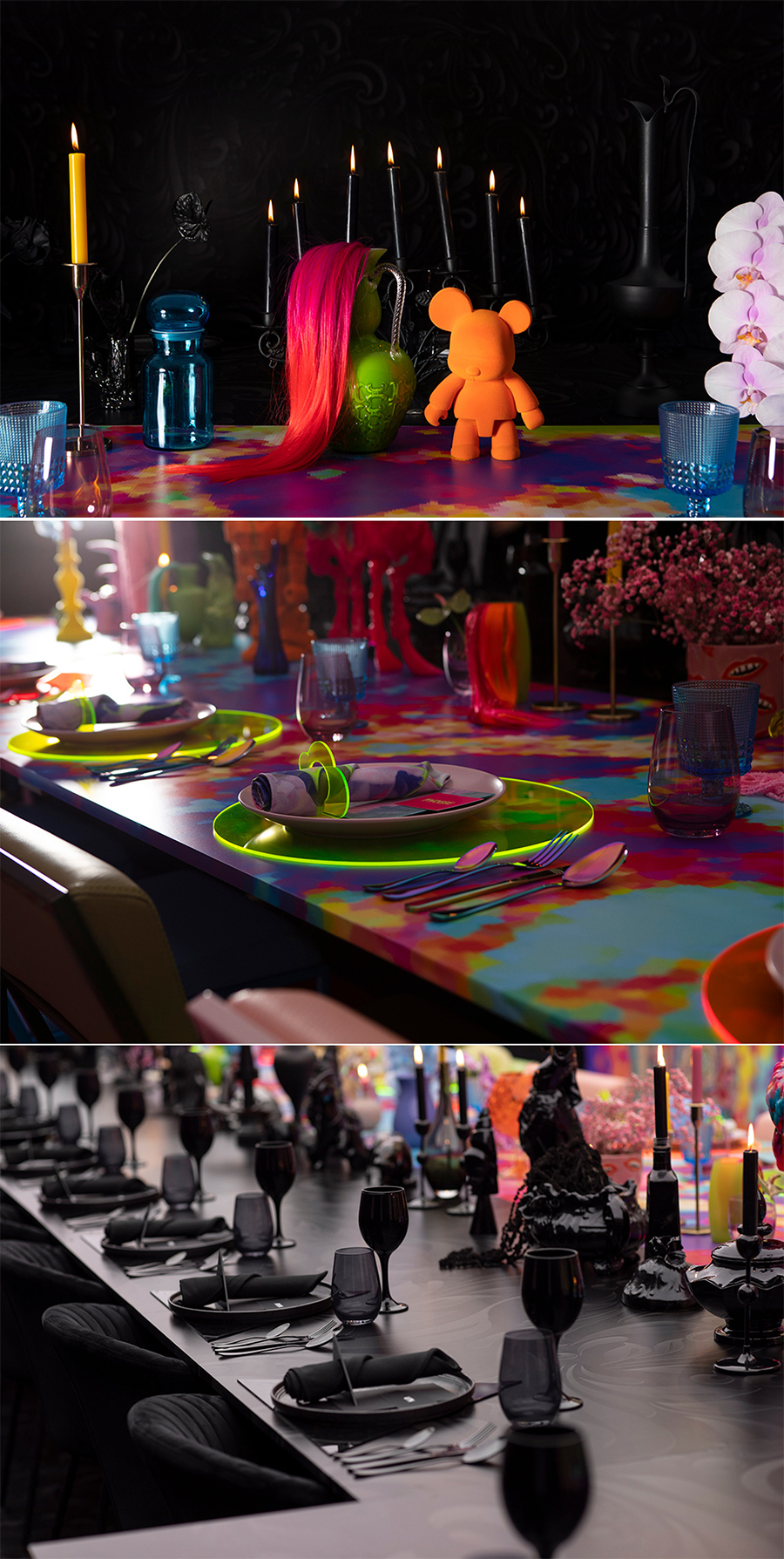 The table was designed by Boom’s industrial design team and built on site from leftover materials from other projects. The table setting was designed by Von and her sister, interior designer Danica. They scoured second-hand shops, flea markets and garage sales for statues and toys that were painted and/or velvet-flocked at Boom.

Each of the couple picked out their personal favourite graphics. Boom printed and installed in total 552 square metres (5,942 sq. ft) of graphics made of heading-to-garbage material donated by various suppliers. 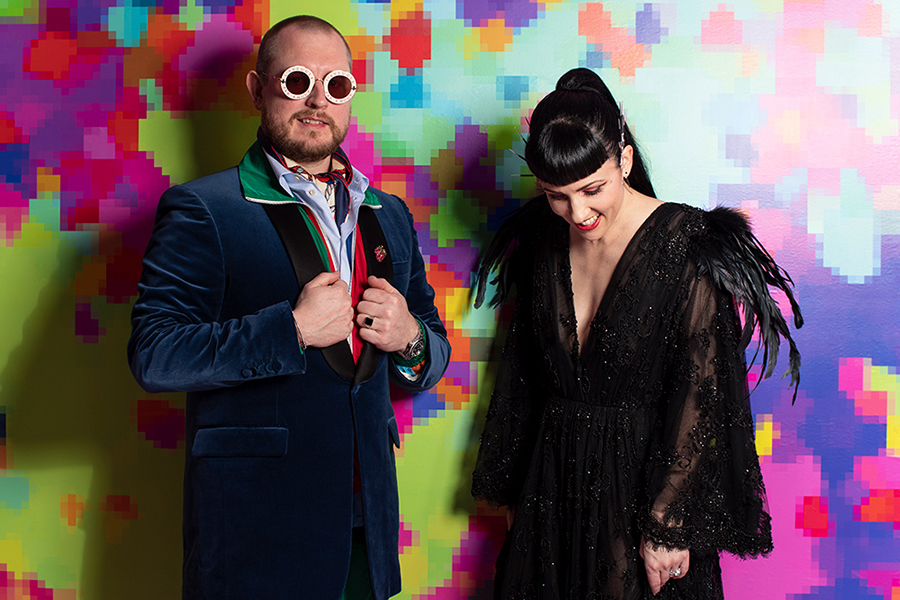 The guests were told nothing in advance, except the couples were asked to select either all colour or all black. Single guests were told which colour to wear so that they would match the décor perfectly. They didn’t even know where the wedding would be, until the day of the event.
Upon entering the space they were served a colour cocktail and a dark cocktail. After a short mix-and-mingle and a super-short ceremony, the real party started with food served banquet-style. “We had the best party of all time, and we ate and drank till 4 a.m.,” the happy couple says. Tuija Seipell. 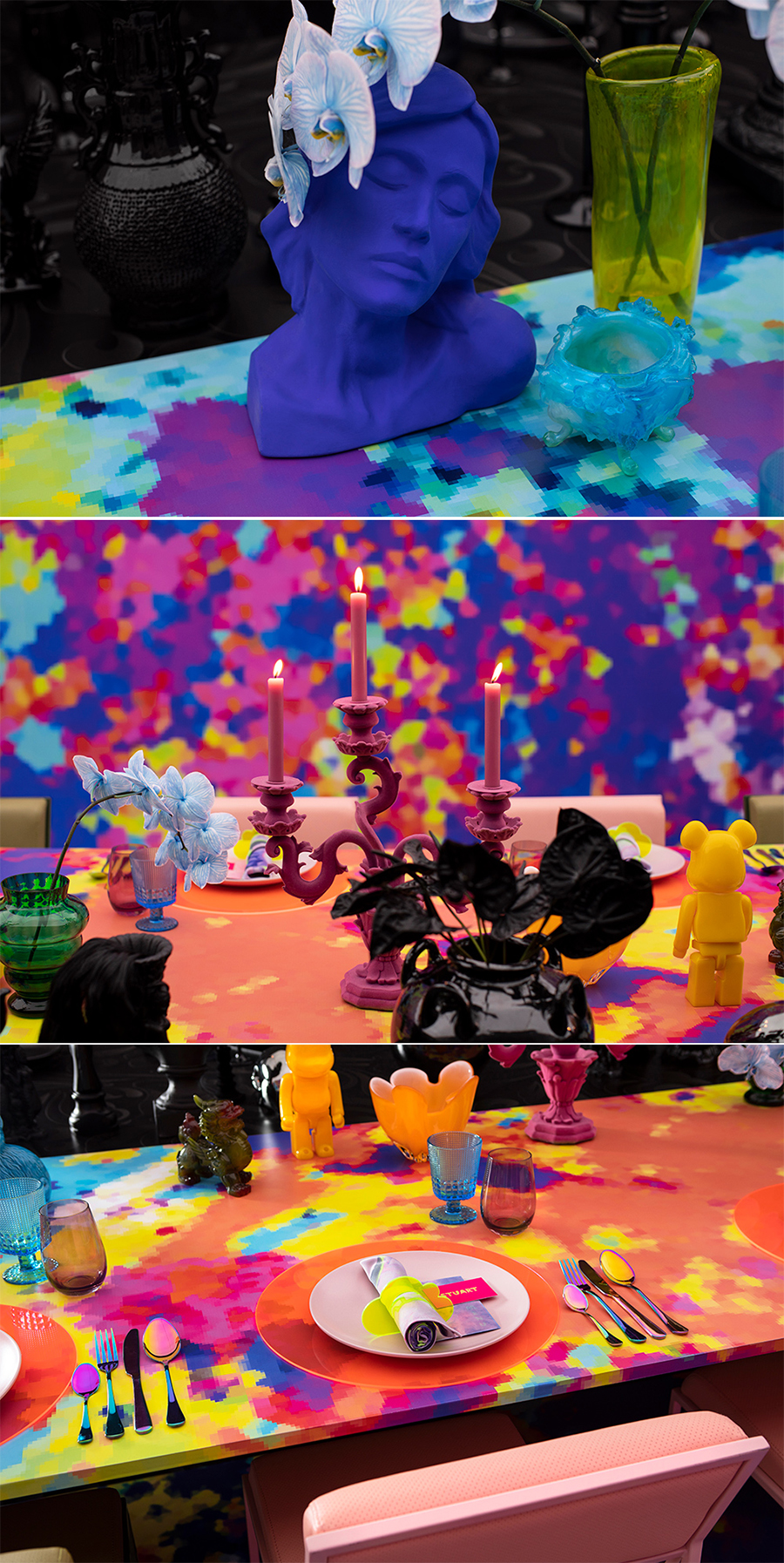