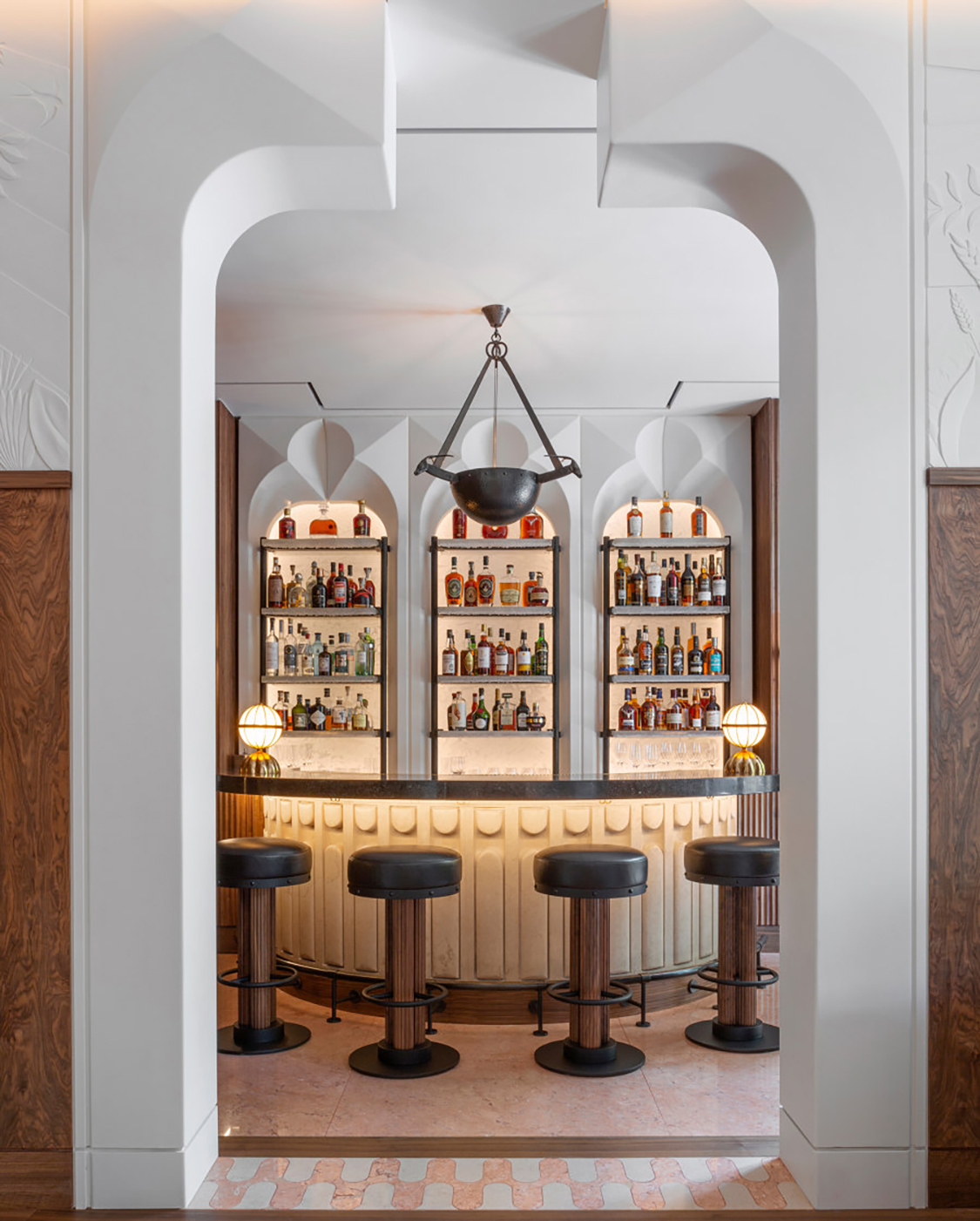 For decades, The Berkeley hotel has been considered one of the finest hotels in London and its Blue Bar one of the city’s finest hotel bars. Last summer, The Berkeley Bar & Terrace was added to the establishment’s attractions in a space formerly used for private events. 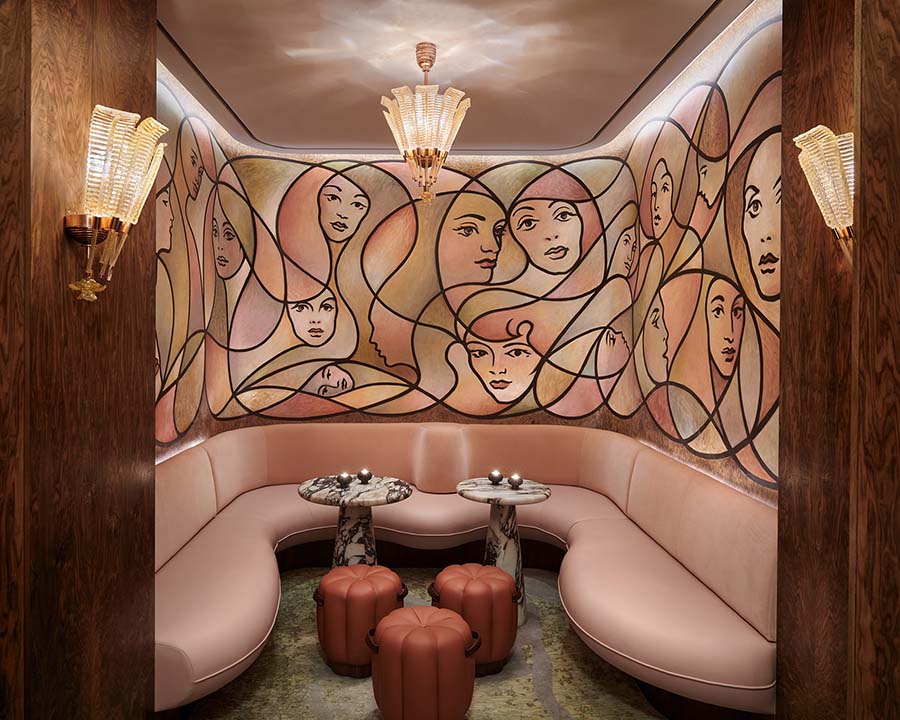 For 100 years The Berkeley hotel has been a landmark in Knightsbridge although its history started already 200 years earlier. The Berkeley was first known as a coffee house on the corner of Berkeley Street and Piccadilly. It transformed by stages into a hotel and hospitality venue boasting several London firsts over the years including air conditioning and double-glazed windows. 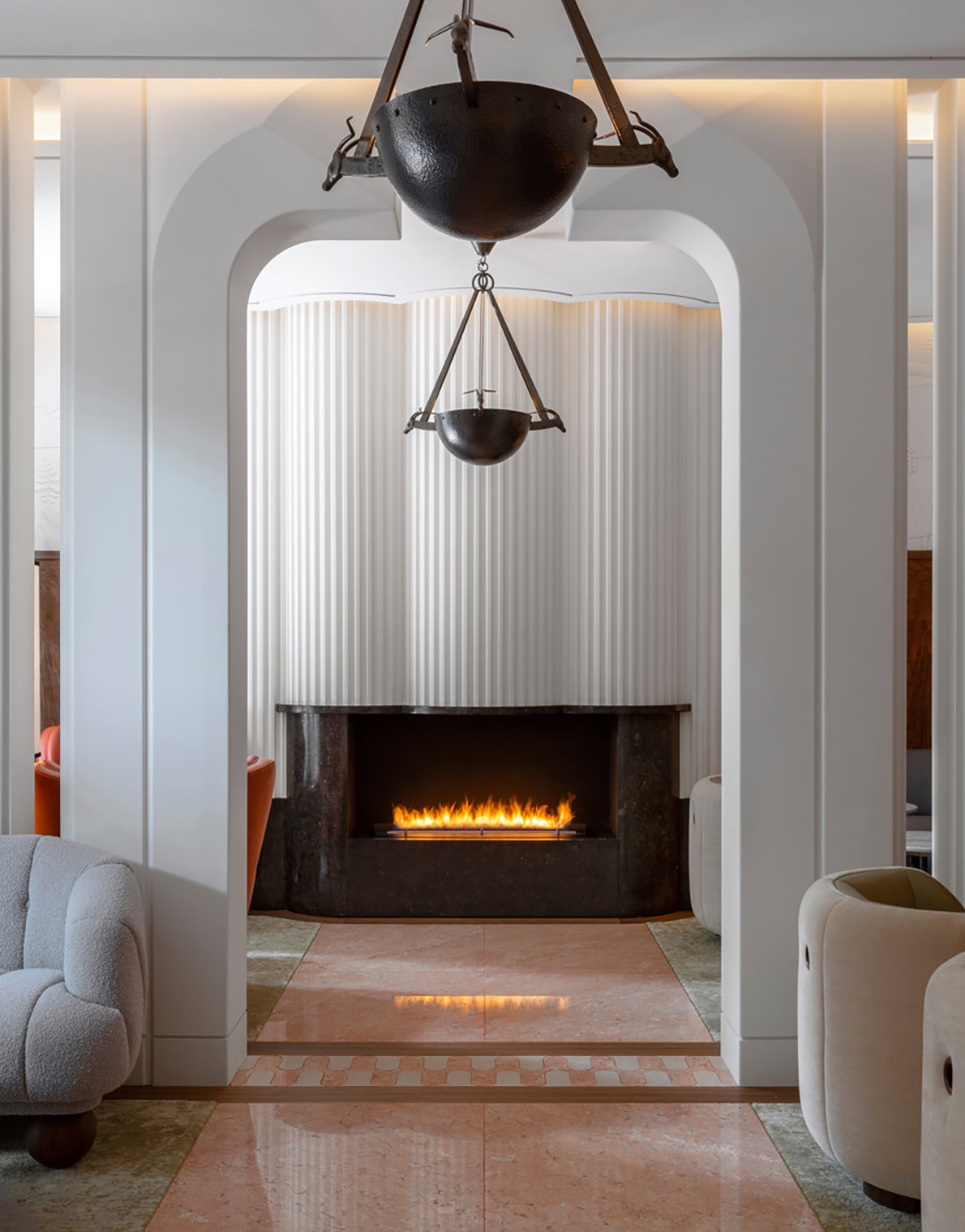 The hotel moved to its current location on Wilton Place in 1972 just two years before the death of the hotel’s architect, New Zealand-born architect and interior designer Brian O’Rorke known for his interiors for luxury ocean liners. The famous Blue Bar opened in 2000, designed by the late David Collins and attracting the starts from John Galliano to Madonna. 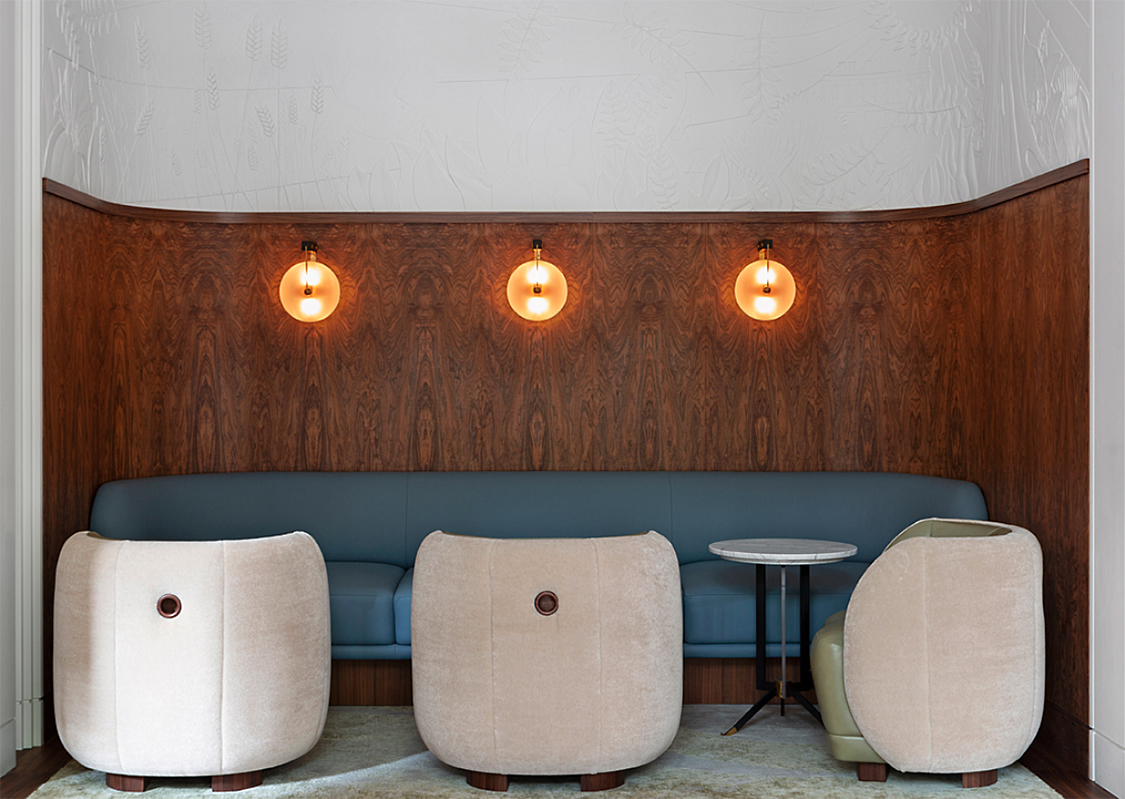 And now, The Berkeley Bar & Terrace, designed by Bryan O’Sullivan is added to the noteworthy Berkeley story. This was the first hospitality project in London for the experienced Irish designer of high-end hotels, restaurants and residences. However, O’Sullivan was familiar with the building as he had trained with David Collins before he started his own studio in 2013. 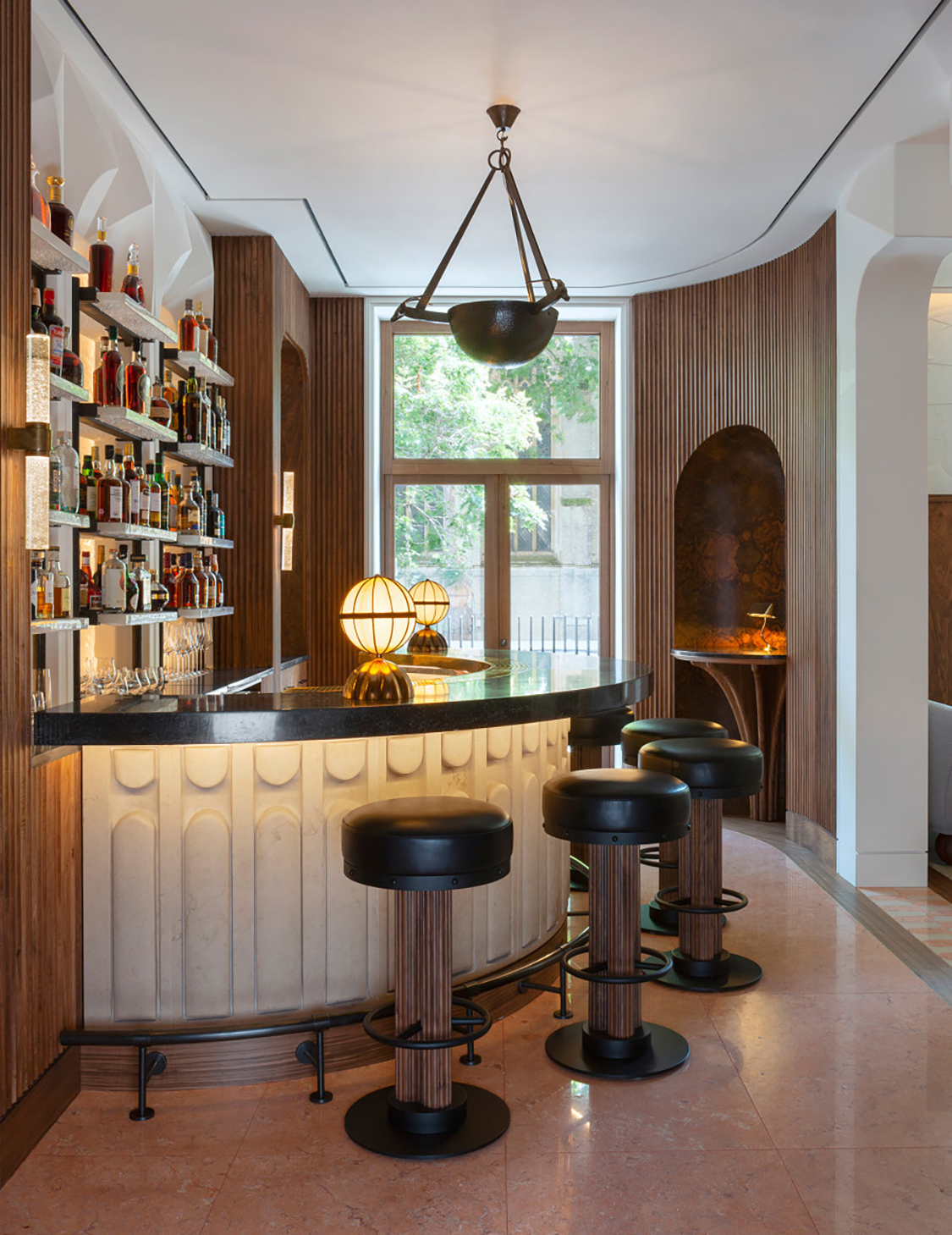 Parts of O’Sullivan’s design echo Wilton Place’s masculine and military history as the hotel grounds were once home to the stables of the Grenadiers, a British Army regiment. Dark wood, cast iron and marble punctuate the space that is otherwise gently white, cream and coral hued. And the dark walnut panels are not just of any walnut. They all come from Fulbeck Estate in Lincolnshire, England, from a 300-year-old tree that fell during the great storm of 2007. A plasterwork frieze above the panels tells the story of the magnificent tree.

Another eye-catcher of the Bar is located in the nine-seat Snug, a traditionally private room reserved for women in gentlemen’s clubs. The walls behind the curved sofa feature a custom mural by New York artist TM Davy http://www.tmdavy.com/ whose work here is a departure from his photo-real depictions of people and animals. 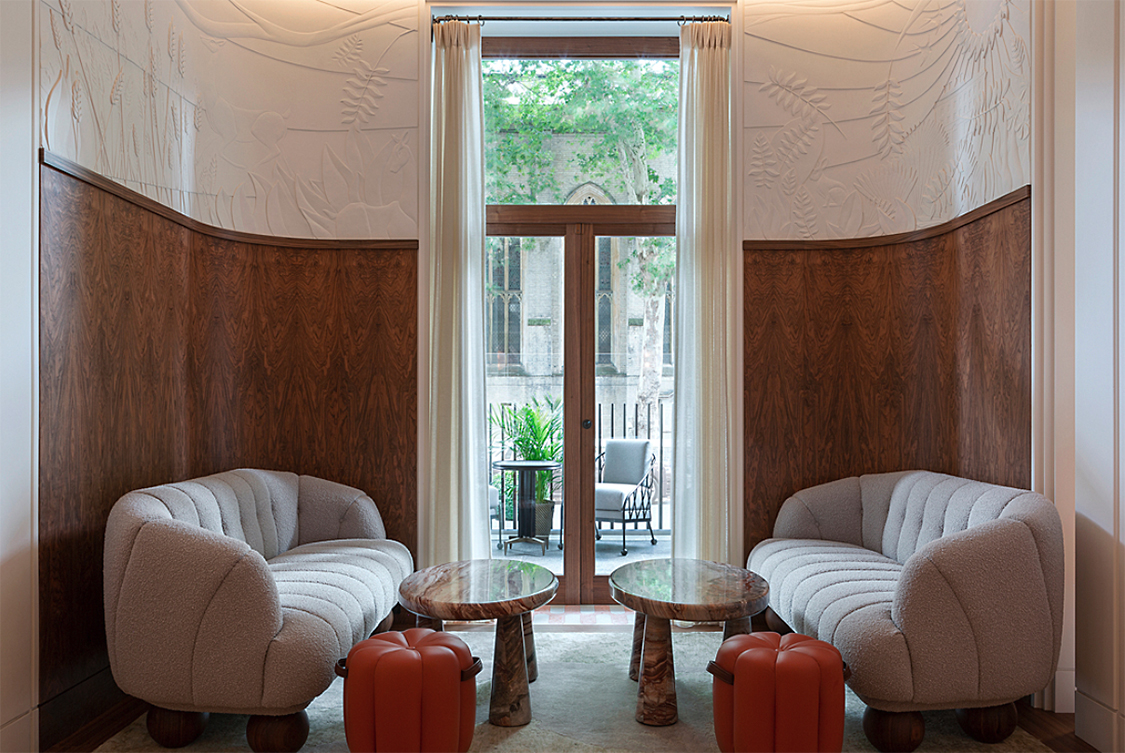 And for those patrons who wish to enjoy the four-table outdoor terrace, the view will not disappoint: St. Paul’s Church and mature trees fill the vista. Tuija Seipell. 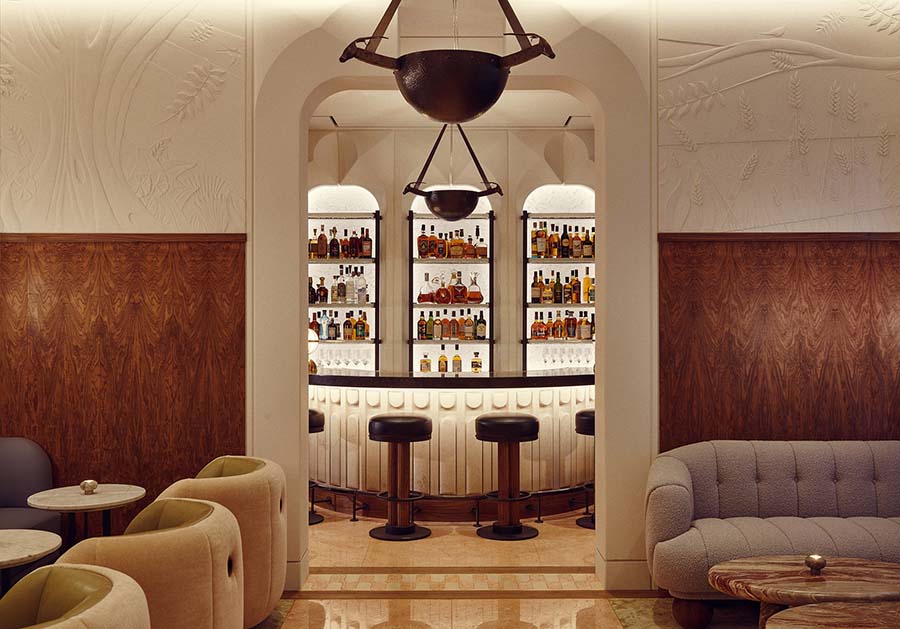