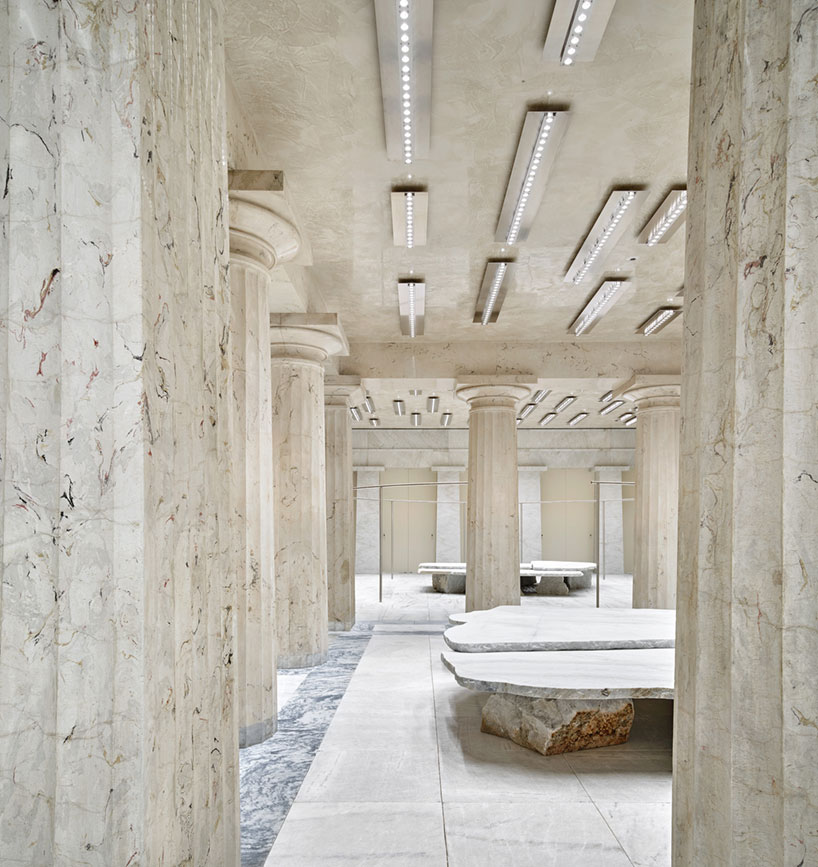 For many years. Swedish fashion brand Acne Studios has had its flagship store in the heart of Stockholm at Norrmalmstorg Square in a grand 19th-century building. The former bank is famous for the August 1973 robbery and six-day hostage-taking that eventually lead to the term “Stockholm Syndrome” (initially called Norrmalmstorgssyndromet in Swedish) describing a psychological phenomenon in which hostages end up sympathizing and empathizing with their captors. 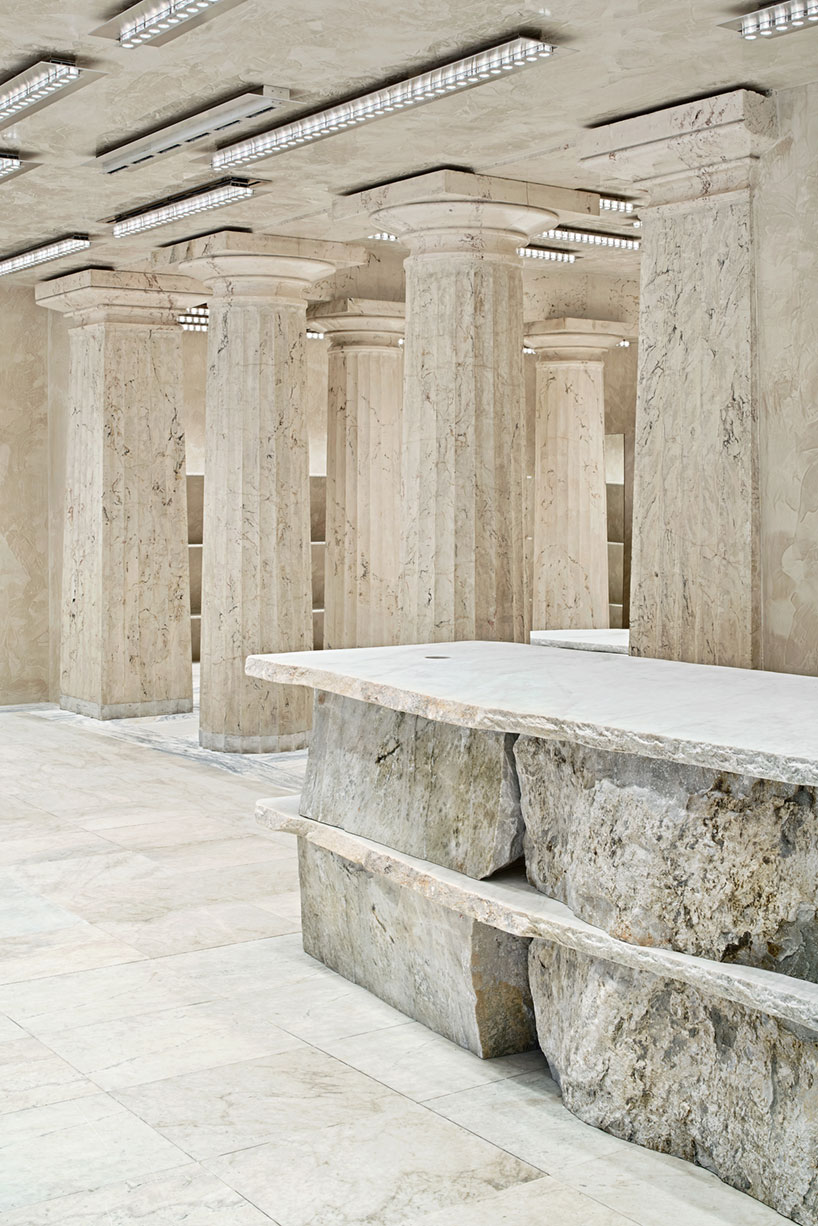 Acne Studios has just unveiled the dramatic refurbishment of this flagship with their go-to Barcelona-based decade-old architecture firm Arquitectura-G whose founders Igor Urdampilleta and Artor Fuentes were responsible also for Acne’s Nagoya store in Japan.

The architects, in turn, cooperated with British furniture designer Max Lamb and French lighting designer Benoit Lalloz who also have been involved in several Acne Studios projects including the brand’s Stockholm-based headquarters in the former brutalist Czechoslovakian Embassy built in 1972 into which Acne Studios moved last year. 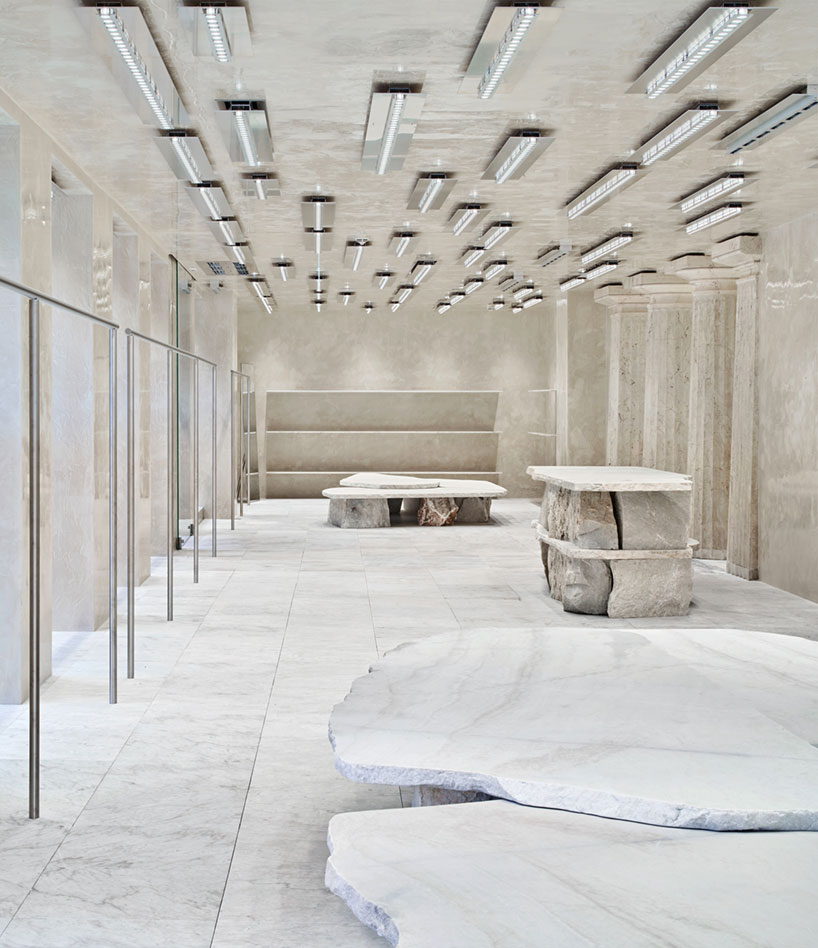 The architects started the renovation project more than three years ago with discussions with founder and creative director Johnny Johnsson. After completely gutting the space down to the bare walls, Arquitectura-G brought out the history and drama of the building which, as a partially a projected site due to the drama and publicity of 1973 robbery, must retain its feel as a bank. 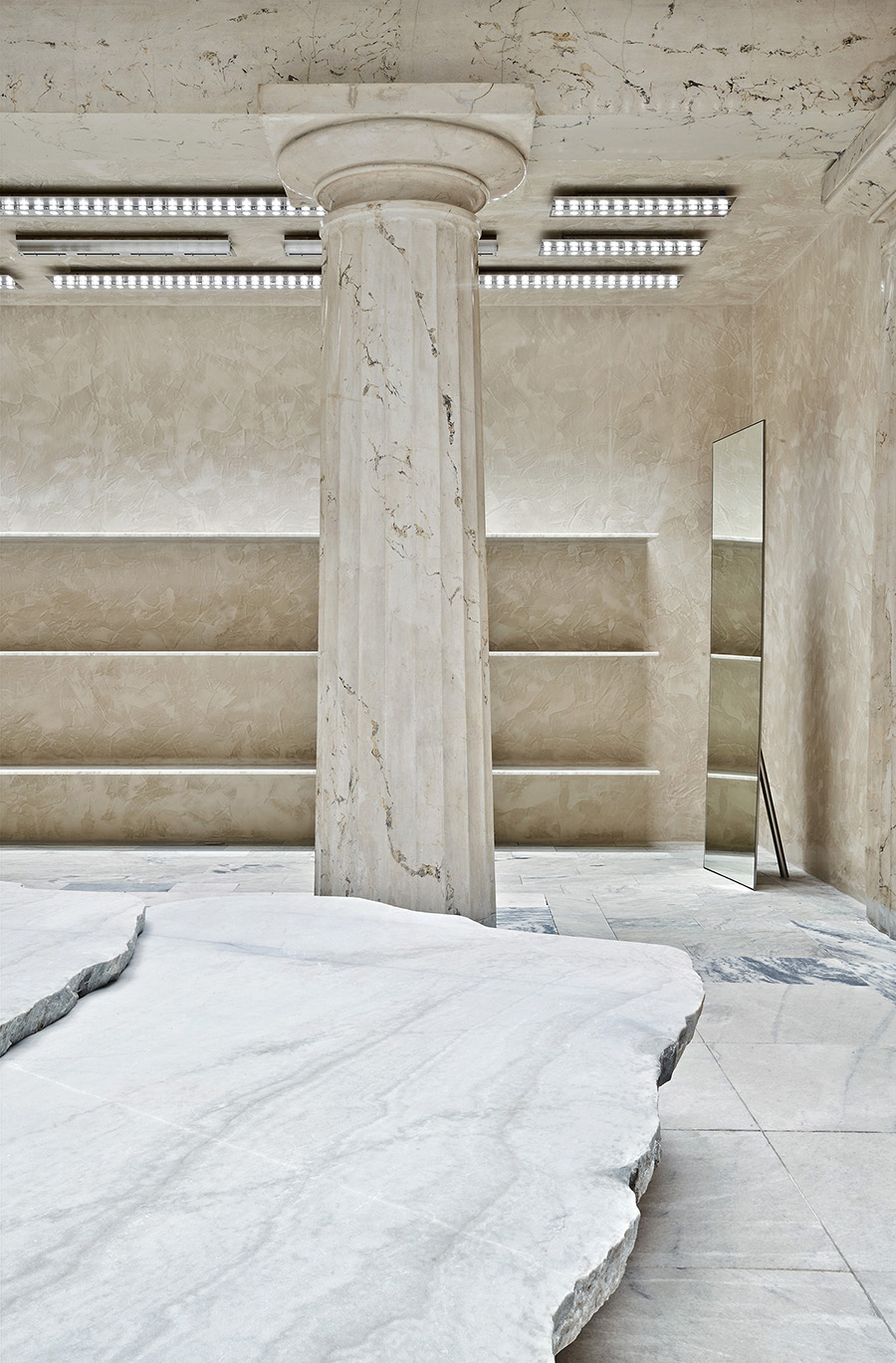 Through the process, the existing authentic Swedish marble columns gained man-made counterparts while Lamb’s massive marble tables and Lalloz’s high-tech lighting contrast with the Neoclassic, Greco-Roman framework. The L-shaped open space of 400 square metres (4.305 sq. ft) has retained its impressive stature yet the grandiosity does not interfere with the modern retail use of the space. 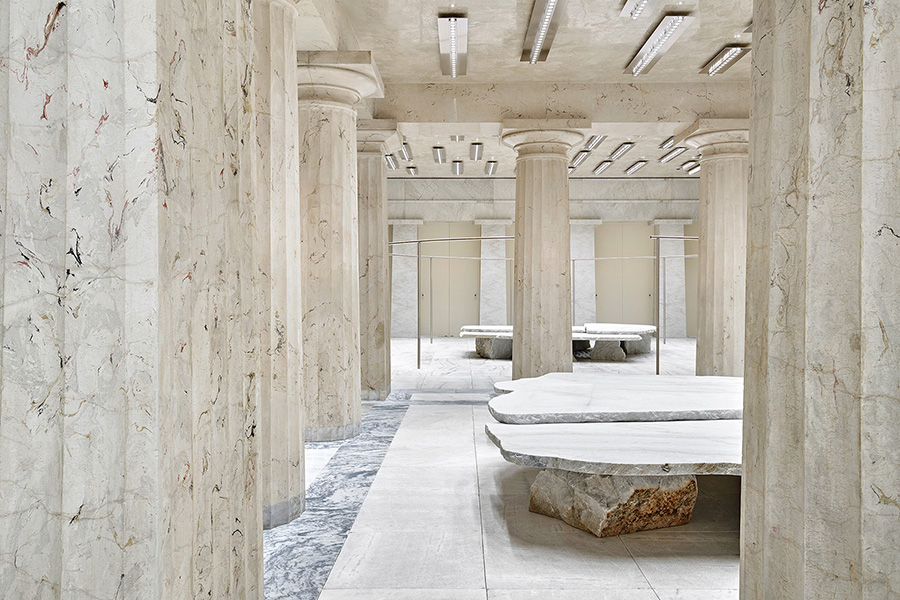 To mark the reopening of the flagship store, Johansson created a Stockholm Syndrome capsule collection that includes a T-shirt, tote bag, scarf and wallet, all featuring images of news coverage from the period of the robbery. 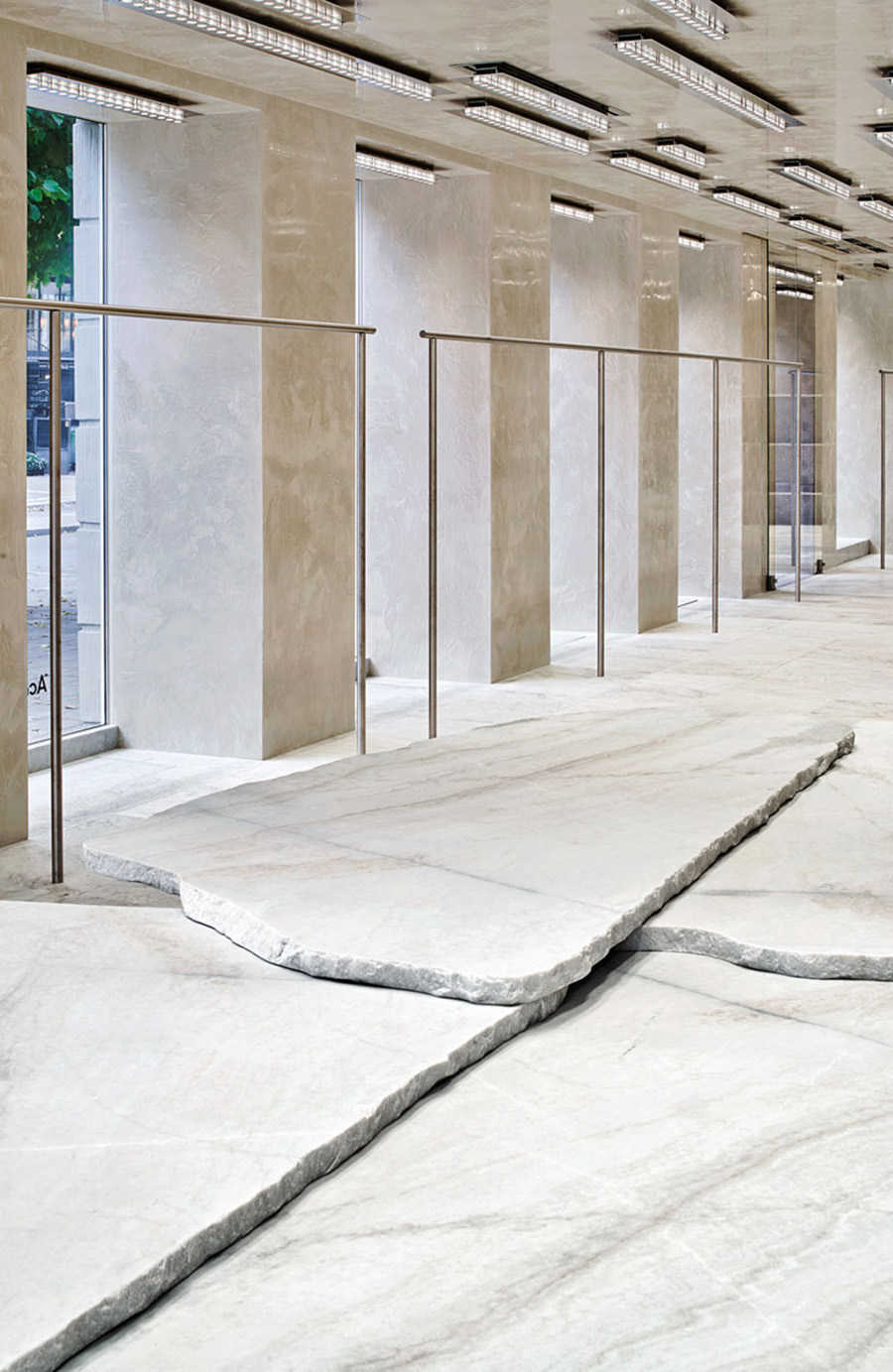 Acne Studios was founded by Johnny Johnson in 1996 as part of a creative collective ACNE (Associated Computer Nerd Enterprises, later changed to Ambition to Create Novel Expressions). Acne Studios became a standalone company in 2006 when it separated from the other ACNE creative collective entities that include Acne Film, Acne Advertising and Acne Digital. Tuija Seipell. 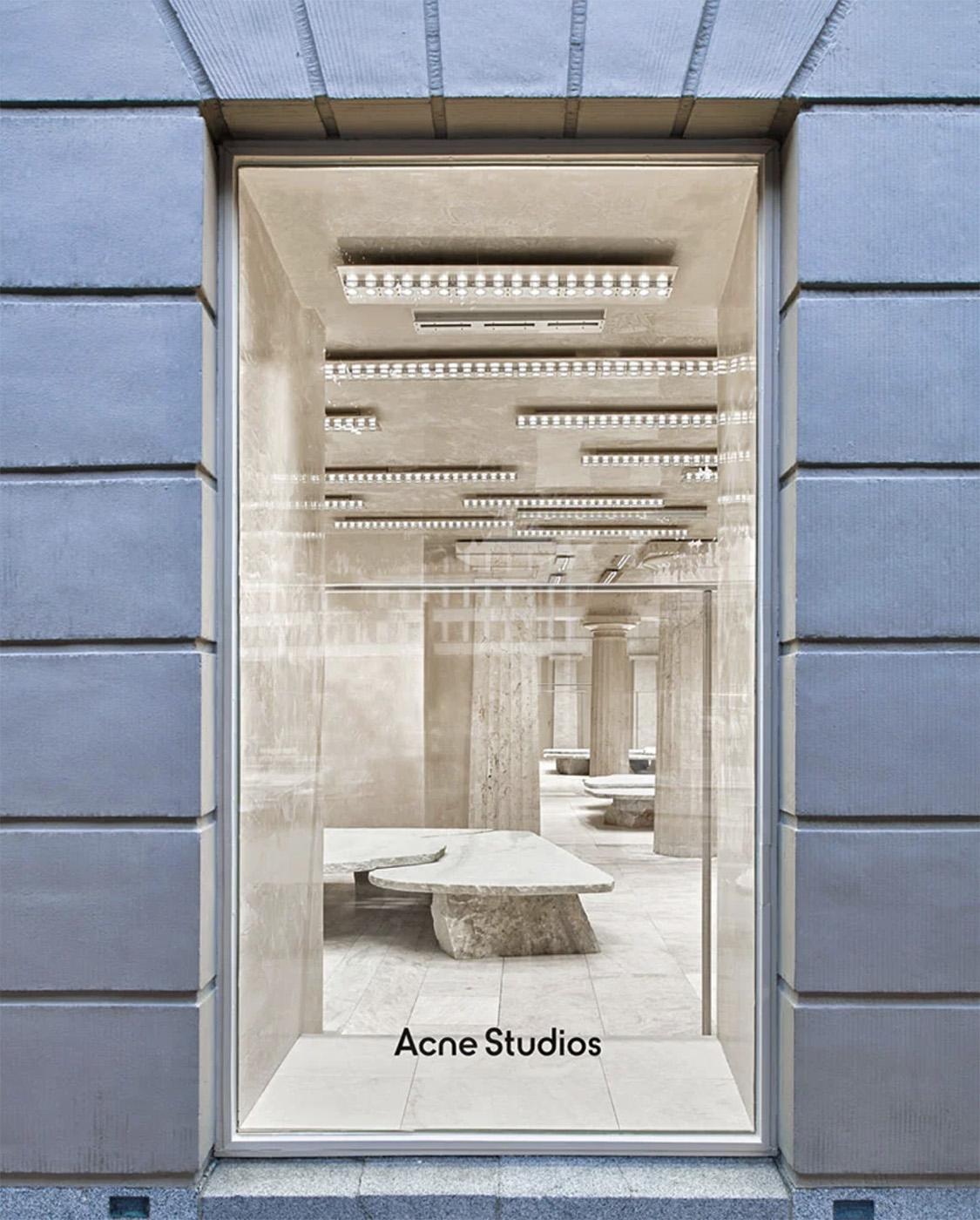